Once again to the question about the Remington rifle with a butterfly valve (part 2).

5 May 2016
46
I found my second Russian rifle in the first special forces museum in Okinawa. And again she had an unusually short stem, a feature that I first took for a modification. This rifle was in even worse condition. However, the caliber markings were clear, as well as the Remington address and the date 22 of October 1901 g. The patent marking was also partially visible. The tooth of the cock was shortened, the bed was repaired, and on the bed and neck of the butt there were stamps in Chinese, Cyrillic and Vietnamese. 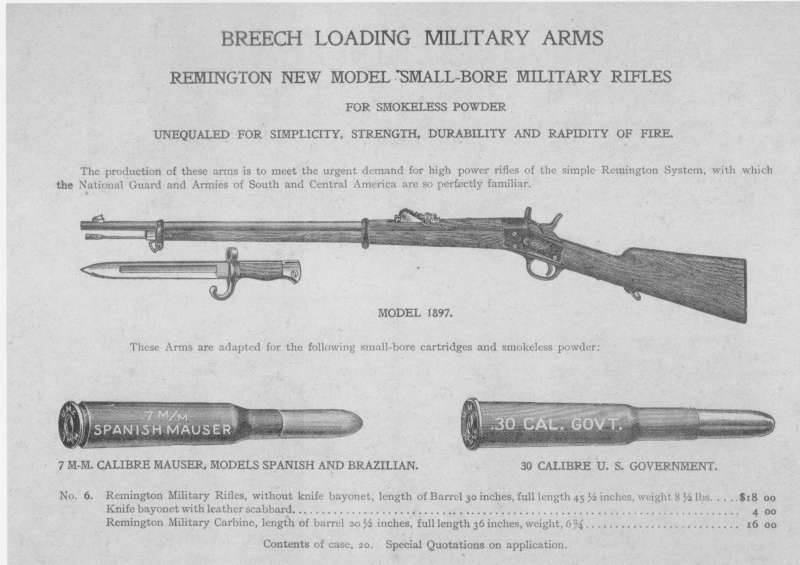 Several years ago, in Gardona, in Italy, several hundreds or more of the percussion mechanisms of the Remington 1902 rifle were found. According to a number of European collectors who bought some of them, this was what was left of the Spanish Civil War and that all of them were sold to an unknown person in Italy around 1958, where they were kept until recently.

If it is leftovers weapons since the Spanish Civil War, they were almost certainly once part of the Remington M1902 rifles sold to Russia, and they were part of a large batch of weapons that Stalin sent in support of Spanish Republicans. Stalin cleared the Russian arsenals, first sending outdated and then modern small arms of various types.

These rotary-bolt rifles were probably part of the first batch of weapons that the Compesh ship took out of the port in Crimea on September 26 and delivered 4 October 1936 to Spain. This cargo is listed as 23350 “Old rifles” .

In August 1938, the victorious Spanish nationalists staged an exhibition of weapons and equipment seized from Republicans. The catalog of this exhibition includes a list of the types of captured small arms and the very first entry in the list is “Fuzeya ... Remington Weapon Factory ..., М1887 (original) ... 7.62 ... Russia”. Except that the model year is not quite correct and for some reason it was strangely called a five-charge model, this is probably the Russian rifle with a butterfly valve. Since the compilers of the catalog knew Russian rifles and rotary-bolt rifles well, the “M1887” is most likely a typo, and the five-charge is just a mistake or the result of some kind of confusion. Or ... the phrase "five-charge" may refer to an experimental adaptation, which will be discussed further, and about which we essentially know nothing.

The photos in the hands of soldiers participating in the Spanish Civil War on both sides show rifles of all models and calibers. But how many of the 2981 rifle rifles were sent to Spain cannot be determined, and why the Remington rifle impact mechanisms found in Gardon remained in the storehouse for so long is also hard to say. Two whole rifles, which I considered in 1971, indicate that not all Russian rifles were sent to Spain, that some of them may still be in circulation.

It was only in 2004 that I was finally able to purchase a Remington rifle with a Russian-caliber 7.62x54mm bolt made for Tsarist Russia; her picture is given in this book.

In 2002, Alex Aksenov, an exporter of Russian weapons and antiques, approached me. He found out about me from my first book on the Remington rifles with a butterfly valve and asked if I was still collecting them. Having received the answer that I am always interested in them and constantly looking for something that I may not have, he told me about a rifle, which I had not hoped to find, M1902, the 88 serial number adapted for the Russian cartridge 7.62X54mm. ** I sent the letter by express mail with my postal and e-mail address, work and home phone, marked ASAP (as soon as possible), because I didn’t want to lose this find. It took me two years to settle all the difficulties, solve customs formalities and withdraw it from the Russian Federal Republic through Canada to the USA. 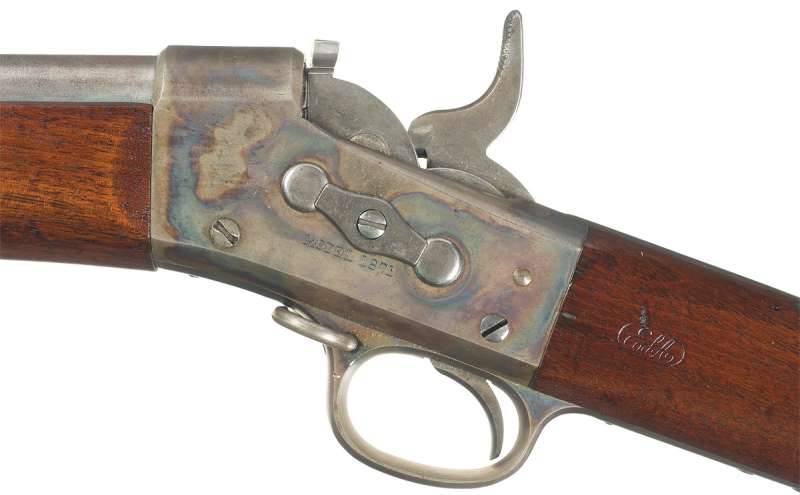 The fastening axis of the shutter was very simple.

How this rifle returned to its country of origin is another example of how important it is to be “in the right place at the right time.”

This rifle began its journey to return to the West only because the irreconcilable members of the Communist Party refused to leave the parliament building. In 1991, the Russian army was ordered to knock out former Politburo members entrenched in this building. Artillery (so in the text - approx. Authors) fired at this building before starting its assault. Two shells altogether passed by and both hit the building of the former Moscow Military Research Center. This center was founded in 1935 and military equipment was put up for research and use by the military. Only in 1986 was it open to the public and became a museum. The exhibits included all types of military equipment, such as sabers, muskets, rifles and saddles, from the war with Napoleon to the Soviet period of the Second World War. The firearm exposition included five Remington rifles with a butterfly valve, which were called musketones. Artillery shells damaged the building of this military research center, it was not guarded, and it was possible to enter it. It took the Moscow police and the military about 4 days to finally remove all curious citizens from there and ensure his protection. However, more 1000 rifles, pistols, rare prototypes, drawings, many historically valuable military and civilian artifacts evaporated without a trace, then to appear on the thriving Moscow black market. Alex also told me that many other rare rifles, such as the Winchester 1866 and 1895 models and muskets in good condition, disappeared from this center along with the Remington musket 1902 models.

Full disassembly of the Remington bolt.

While the location of the other four rifles with a serial number 88 remains unknown. Having an almost photographic memory, Alex was able to remember, and later jot down a significant part of the information from the cards that remained at the exhibition long after the center building was looted, but he did not dare to ask whether they could be copied, although he himself This robbery did not participate.

On the research center card, these rifles were called the “Remington Special Rifle 97 Special” and it was noted that most of them are equipped with “Maxim 3-S silencer”. Maxim's silencer invented Hiram Percy Maxim, son of Sir Hiram Maxim, inventor of the famous machine gun. It was patented in 1909. The 3-S was designed for high-power rifles and was offered to the civilian market around 1910. The marking on the tail of the receiver also changed around 1911 g, so they were made or 1910- 1911g., Or silencers on them were already installed in Russia. The card also noted that less than 1000 rifles have signs that they had a combination of "accelerated charging clip and rear sight on the receiver." Whether this was done in Russia or by the Remington company itself, or, perhaps, as a subcontractor, is also unknown, although I think that if this were done in the USA, there would have been some notes, a patent, or memories of this. Alex told me that the idea of ​​combining a rear sight on a sniper-type receiver and charging accelerator was abandoned around 1911-1912, and the 981 rifle with such a device was restored to its original state. They just plugged additional holes for the screws. These clogged holes are located on the upper left and right side of the case, at the top of the shutter and on the tail. Since I have never seen any such device, I have no idea how it looked and how it worked, but since the rotary-bolt rifle is a single-shot rifle, it’s interesting to know if it could have included a simple cartridge lock, something like Metcaph prefixes, which were tested on a Springfield rifle with a hinged bolt.

The barrel was shortened and the ramrod removed to make room for the muffler. Alex noted that my rifle was received complete with a Maxim silencer placed on it. The card in the exhibition of these five rifles mentioned their use during the First World War, but nothing was reported about their current location. All five rifles on display were completely finished “in white”, but it is unknown if the whole batch of 2981 rifles was with the same finish. European museums, notorious for their habit of giving the outer gloss to everything, so the fact that rifles look so great does not prove anything. Alex recorded the serial numbers of the four missing rifles from those cards that remained on display. These are 116, 1467, 1673 and 2504. The 88 and 116 numbers are the only two numbers that indicate this mysterious alteration. No one knows if any of these devices of the rear sight / accelerated charging have been preserved, and Alex made it clear that further questioning would be undesirable.
(Note of the authors: in the photo on p. 69 in the book “Firearms” Shokarev Yu.V., Plotnikova S.Е., and EM Dragunov, you can see the image of the Remington carbine with such an accelerator.)

* For obvious reasons, this is a fictitious name.
** This is the Russian serial number. Rifle rifles never had them. 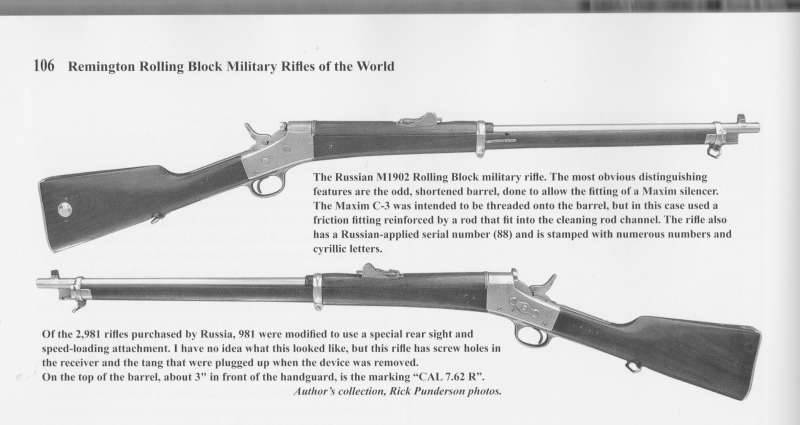 Remington Russian rifle with rotary shutter M1902. Its distinctive feature is an unusually short barrel on which Maxim's muffler can be mounted. Maxim C-3 should be screwed onto the barrel, but in this case a friction fitting, reinforced with a rod, which is installed in the ramrod channel, was used. The rifle has the 88 serial number adopted in Russia and a stamp consisting of the number and letters of the Russian alphabet (Cyrillic). From the 2981 rifles purchased by Russia, the 981 was modified and equipped with a rear sight and a device for accelerated charging. I can not imagine what it looks like, but on the receiver and tail there are holes for screws that shut up when this device is removed. On the upper part of the barrel, approximately three inches in front of the trigger hook, is marked “CAL 7.62R”. (Author's collection. Photo - Rick Panderson)

Text from the George Lauman Collection Card:
"REMINGTON
Model 1897 / 02 Russian "Musketon". Special order 273 A.
7.62х54mm Russian early 1902 model of the year (developed before Remington / UMC tail marking, but includes the extractor Daise).
Note: marking “CAL .7.62K” on the barrel. The 88 serial number is stamped behind the trigger across the tail of the receiver, on the lower part of the tail, on the guard across the upper part, on the lower front part of the butt and on the lower part of the forearm. The Cyrillic “order” (contract) marking is easily distinguishable, as are other markings, such as MV, which means Moscow Military, short for Moscow Research Center. The emblem with the Soviet star, sickle and hammer, and on top of the letter MV is the designation of the owner. "

Note: this text, as you can see, is very indicative in all respects. Firstly, this is information from a serious source. Secondly, a clear example that our propaganda does not always inform us about the "intrigues" of our overseas partners in an appropriate manner and often writes much more than what actually is. This is also information about how and where our historical artifacts and attitudes towards Russia and its history by people like George Lauman. All this is very interesting and revealing. In addition, we found out that the role of Gorlov and Gunius in the story with the Berdan rifle was directly opposite to what Soviet historiography attributed to them! Accordingly, the “bad” tsarist minister and “satrap” Milyutin turned out to be the very person who opened the way for the “berdanka” in Russia, and, as a result, our famous “three-ruler,” that is, he acted as a smart, stateful and responsible husband!

Ctrl Enter
Noticed oshЫbku Highlight text and press. Ctrl + Enter
We are
Once again to the question about the Remington rifle with a butterfly valve (part 1).Remington rifle: by countries and continents
Military Reviewin Yandex News
Military Reviewin Google News
46 comments
Information
Dear reader, to leave comments on the publication, you must sign in.