To the day of Korean cosmonautics


April 23 North Korean Central Telegraph Agency News reported successful trials of a sea-based ballistic missile. According to official data, they were carried out in order to test the operation of the underwater launch system at maximum depth, as well as to test the latest solid-fuel engines.

According to the agency, everything went well, which was confirmed by the photographs presented, which captured not only Kim Jong-un who was present at the tests, but even the launch of the rocket from the submarine’s mine, its engine launch and flight to the target. However, the experts immediately doubted that the launch was precisely from the board of the submarine. In addition to the ritual statements that this is another propaganda ploy of Pyongyang, the version was voiced according to which the rocket was launched from a special stand and while North Korea is only approaching the development of a submarine launch technology.

According to the presented photos, it is impossible to categorically assert that solid rocket engines are installed on the tested rocket. Although according to many experts, this version is supported by the characteristic thick smoke and color of the flame that accompanied the engine in flight.

A day later, official reports appeared from representatives of the South Korean Defense Ministry, according to which the launch was made at 18.30, Seoul time, from the waters of the Sea of ​​Japan near the city of Sinpkho in the province of South Hamgen. 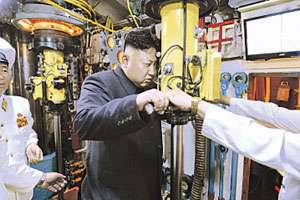 According to the Ministry of Defense of the Republic of Korea, the rocket was launched from the board of a Xingpo class submarine with a displacement of about two thousand tons with the help of the so-called cold start.

In Seoul, it was stressed that the submarine was most likely the carrier, and not the underwater stand or a specialized barge.

According to the Russian classification, “cold start” is a launch in which a rocket is ejected from a launcher due to the pressure created in a closed volume. We call it "mortar" and is the only solution to ensure the launch of missiles from submarines.

True, Seoul made a reservation that the full test of speech is not. The rocket fell, flying only about 30 kilometers. And the world media hastened, with reference to the Ministry of Defense of South Korea, to call the launch unsuccessful, although the DPRK announced only the tests of the launcher and solid-propellant rocket engines.

If you figure out, Seoul, albeit reluctantly, still acknowledged the fact that Pyongyang successfully tested a ballistic missile with an underwater launch. She came out of the mine, onboard systems worked properly, running solid-fuel engines. And the media out of habit wishful thinking.

It should be noted that the official photographs of the tests presented by the North Korean news agency “lit up” for the first time, shrouded in this moment by the halo of secrets of the Sinpo-class submarine, which in its time caused a lot of disputes among experts. According to the popular version, the new diesel-electric boat, designed to replace the previously supplied by the Soviet Union submarine project 633 ("Romeo" according to NATO classification) - the creative development of the Russian "Varshavyanka". But in the photographs presented, the North Korean diesel-electric submarines do not even closely resemble the prototype. Sinhpo clearly has less displacement, and visually it resembles the submarines of the Son Won-2 series - the German submarines of the 214 project built for the South Korean Navy at the shipyards of the Daewoo Corporation.

And the most important question: how many ballistic missile launchers did the North Korean shipbuilders manage to place in the fairly compact Sinpho?

A week before the sea launch of the DPRK, it failed to test the land-based ballistic missile Musudan. True, the official Pyongyang did not report this. And the South Korean military said that the launch of 15 on April, the 104-th birthday of Kim Il Sung, was unsuccessful. This was confirmed in the Pentagon. But the annoying hitch did not diminish the DPRK’s determination to continue the missile program, not only important for the country's defense, but also bringing tangible financial and material dividends to the isolated country. 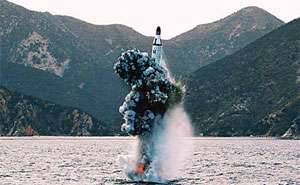 With all the remaining doubts, it is already clear that the North Korean developers were able to make a breakthrough and master the critical technologies. In particular, despite the fact that the rocket flew just 30 kilometers, its creators designed a workable control system, even if its fine-tuning takes some time. If earlier Pyongyang mainly used liquid-propellant rocket engines, primarily because of the well-known difficulties in developing and, most importantly, producing both the solid fuel itself and the fuel charge (briquette), now North Korea has been able to create this technology. Shortly before the historic launch of a ballistic missile in the official photographs of the North Korean Information Agency, which captured Kim Jong Un in his office, the drawings of an allegedly new naval missile hit the frame, where solid-fuel engines were clearly visible in the design.

TRDs will undoubtedly find their place not only in the sea, but also in land-based BR. Of course, this will lead to higher prices for the design of products, but will increase their technical and operational reliability, which North Korean missiles with LRE do not have enough.

Many experts call the achievements of Pyongyang "clumsy", but for the stated parameters of the new product - 300 kilometers of flight range - and such developments are enough in excess. Moreover, the maritime launch makes a new missile a very serious threat, to repel which will require both missile defense systems and anti-submarine warfare systems.

Another important feature - the launcher can be placed on board even relatively small diesel-electric submarines.

It is possible that the new North Korean product was created with the support of other countries interested in obtaining such weapons and technology. One of the possible sponsors is Iran, which, although it is outdated, has a rather large submarine fleet by the standards of the Middle East. The novelty, undoubtedly, will interest Pakistan, which also has submarines, the installation of ballistic missiles on them will increase their combat potential.