April 21 2016
11
In the middle of 1980's. in the USSR, a robotic, remotely controlled grenade launcher complex designed to protect secret objects was developed and put into service.


How many in stories There are wars of mankind, so many warlords break their heads over how to reduce the loss of their troops. Today, there are three ways to tackle this issue: improving and strengthening remedies, creating more powerful and sophisticated samples. weapons and the exclusion of man from the very process of fighting. The latter path is realized only by the creation of automated (robotized) combat vehicles operating without human participation, both self-propelled and stationary. Such machines tried to create a long time. Suffice it to recall the walking man Leonardo da Vinci. It was a machine with a limited program of actions: moving forward, backward, bending, etc. The robot was placed in metal armor or armor. 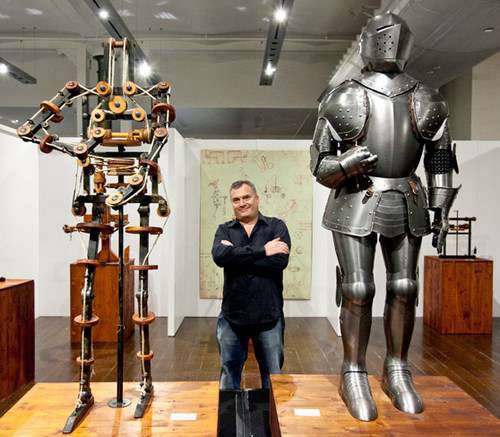 In the XIX century, with the development of science and industry, ideas about steam robots in the form of a horse and an iron man appeared that could be a force for transporting carts and even participate in racing races. See picture below. 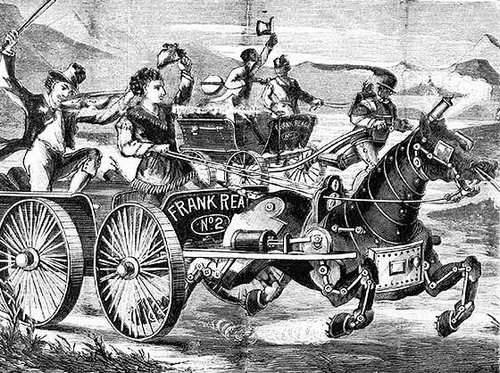 However, progress in this matter was achieved only in the 30s. last century. In the USSR in 1929-1930 based on captured French tank Renault developed a cable-controlled design. In the years 1931-1932. already tested tank of domestic design MS-1, or TT-18. It was controlled by radio: moving at a speed of up to 4 km / h, it could execute commands “forward”, “right”, “left”, “stop”. 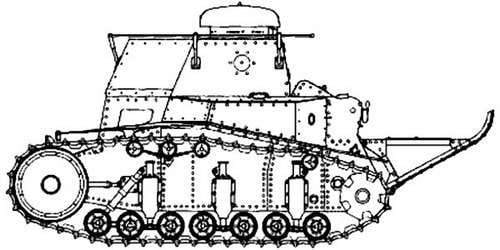 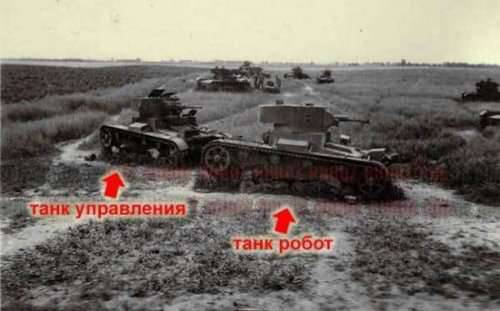 During the Second World War, Italy and Germany used remotely operated boats at the front, carrying powerful explosive charges on board. 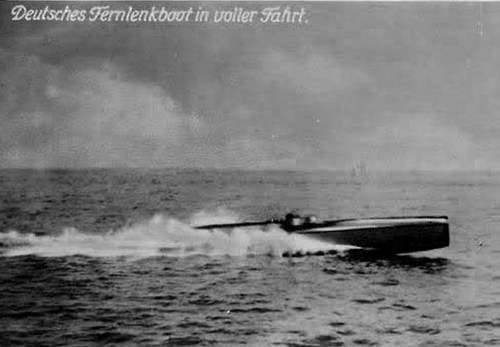 After World War II, specialists began to think about creating stationary remote-controlled installations designed to protect military and secret objects, and in the conditions of war, to cover areas of potential enemy breakthroughs. Such installations would help to organize the defense of the site with minimal forces while maintaining effective defense. 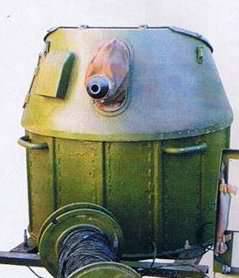 This complex was designed to equip fortified areas, roadblocks and protect objects of various purposes (airfields, military bases, sections of the state border, industrial facilities in wartime, etc.) with a significant reduction in personnel and its losses. The main method of using the complex is to create barrage fire and destroy enemy personnel.

They produced these complexes in Kazakhstan in the city of Uralsk at the Metalist plant.

Structurally, the complex consists of four 30-mm grenade launchers, control equipment with a remote control, an electrical equipment block, a wired communication line and its own direct current source. Calculation of the complex - 2 people. 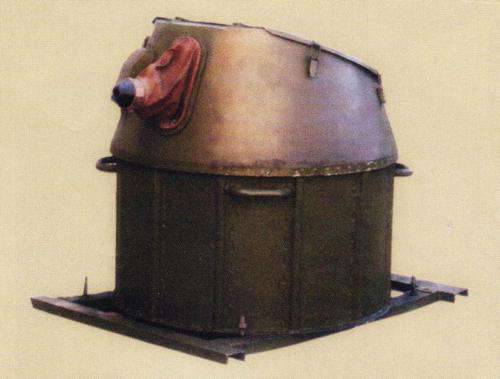 The main weapon is an aviation X-NUMX-mm grenade launcher AG-30A, the work of automation is based on the use of free rollback energy, one-sided power supply, right-hand, from a magazine using a metal tape, firing speed - 17-400 shot / min., Weight of the grenade launcher - 500 kg . A VOG-22M shot (weight 17 kg, length 0,348-130 mm, radius of a continuous defeat - 132 m) with an instantaneous fuse is used for firing. Ammunition is 7 shots. 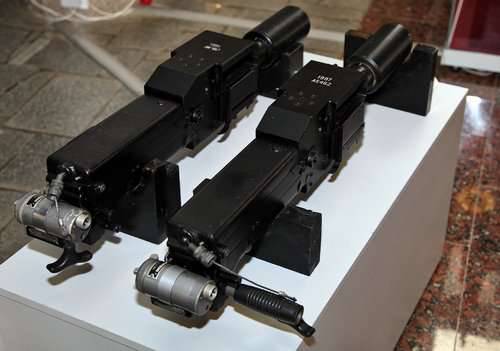 The machine also contains mechanisms for vertical (0-35 degrees) and horizontal guidance (300 degrees), guidance speeds on the horizon 5-7 degrees / s, and vertically - 0,8-1,2 degrees / s. The mechanism of horizontal guidance on commands from the control panel provides automatic dispersion in the 60 sector of hail. and shooting without scattering over the entire range of pointing angles. The mechanism of vertical guidance provides a change in firing range from 300 to 1650 m. 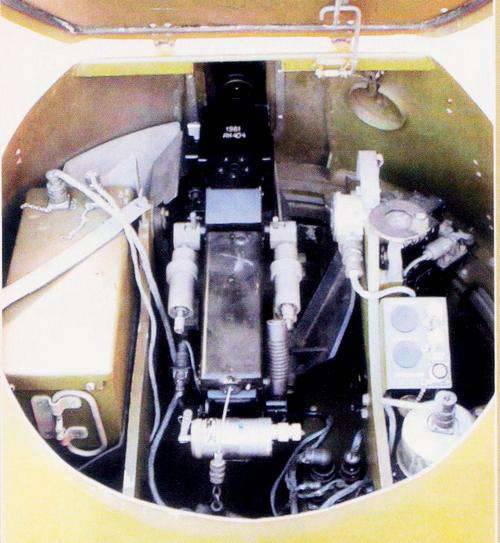 View of the installation from the inside 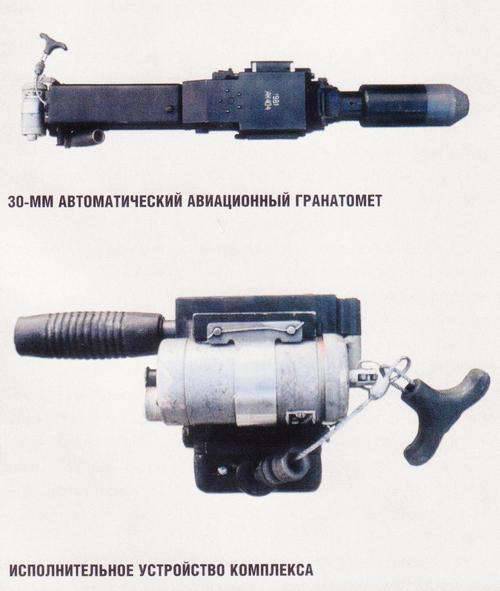 The MIUS electrical equipment includes switching units, a vertical and horizontal ignorance sensor, cables, and a power source (from 220В or five rechargeable batteries using 24В). The length of the power cable is 500 m, and the length of the communication line between the control panel and the combat vehicle is 1000 m. 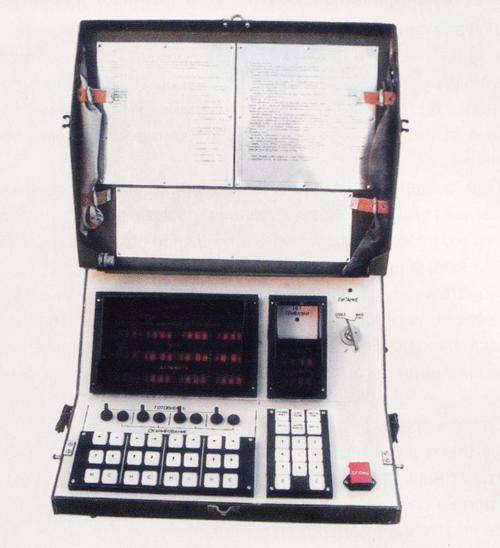 Operator control panel. On the lid of the box the instruction for the operator to work with the complex

In the process of combat use of the installation, the operator drives on and off the guidance drives, the start and the cease-fire are performed by the operator, giving commands remotely from the console. Targeting can be carried out in automatic or manual modes. In semi-automatic mode, the coordinates of the complex and targets are entered into a memory device of the control panel, and calculations of the installation guidance parameters are made using them, which are transmitted to the Miusa transceiver via a communication line. The grenade launcher, from which it is planned to fire, can be selected according to the program laid down or determined by the operator. 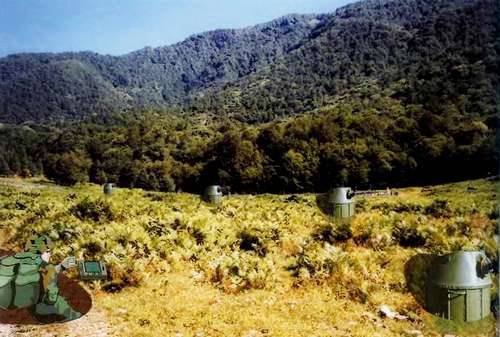 At the combat position, the complex is placed in the trenches and fixed on the ground with special pins. Next, the base of the structure is sprinkled with earth or lined with sandbags or earth. The control point is also located in a trench, at a safe distance. In a combat situation, the operator controls the four complexes, which have the following characteristics.

Unfortunately, there is no information about where such complexes are now used and whether they were used for their intended purpose.