Projects of light tanks of the Typ 245 family (Germany)

April 25 2016
9
During the Second World War, the German company Porsche proposed and developed many new projects of promising armored vehicles. Some of these developments reached the serial production and operation in the army, while other samples did not get out of the test stage, since they did not show the expected results, aroused doubts or did not even fully agree with common sense. However, some of Porsche’s proposals, not embodied in metal, were of some interest. An interesting representative of such projects is the family of lungs. tanks Type 245.


In the late spring of 1943, the leadership of the German tank industry analyzed the experience of the last battles and made some conclusions about the further development of armored vehicles. In the enemy troops there were a significant number of anti-tank guns. In addition, intelligence reported on the creation by the Soviet Union of light anti-tank bombs capable of destroying armored vehicles in one or two hits. Thus, promising tanks should have a number of characteristics, first of all, an increased level of protection, both from artillery and from bombs. Analysis of the situation led to the emergence of requirements for a new tank. Several major industrial enterprises were involved in the work.

During 1943, Porsche developed several light tank variants that fit the new requirements. All of them were based on the same developments, which is why they belonged to the same family under the designation “Type 245”. The purpose of the first family project was to create a light reconnaissance tank belonging to the same category as the Pz.Kpfw.II Ausf. L Luchs or VK 1602 Leopard. Further development of the project led to the development of technology for other purposes. 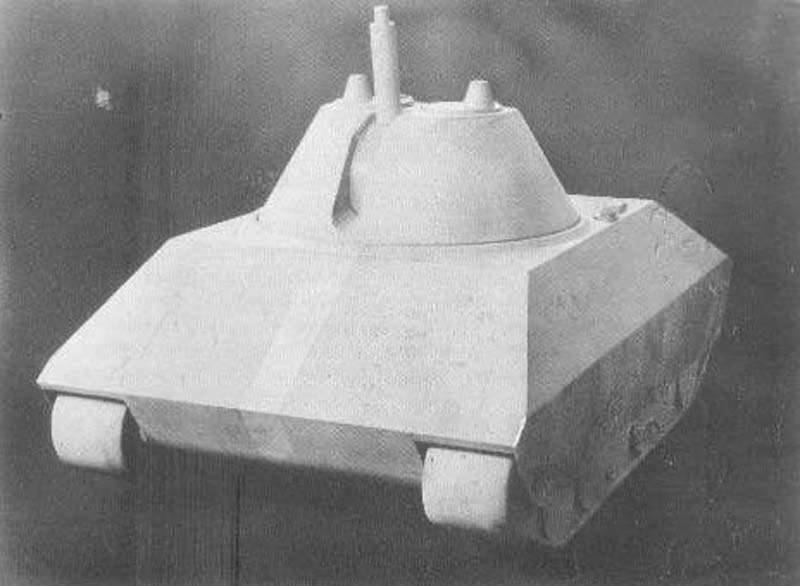 For the Typ 245 tank, a new chassis of the original design was developed, distinguished from other developments of that time by a characteristic appearance. In order to protect against shelling from all angles and enemy bombs in the hull construction it was proposed to use the so-called rational booking angles. In addition, it was planned to equip the tank with relatively thick armor plates: frontal projection protection was proposed to be made from 80-mm parts, and the sides and stern were to be covered with 30 mm-thick sheets. Given the significant angles of inclination, such armor could withstand hits of some anti-tank guns of the enemy.

The armored hull of the "Type 245" tank had to have a characteristic shape formed by several sheets bent inward. At the same time, the frontal and aft parts of the hull consisted of large upper and small lower sheets. Provided developed fenders, the internal volume of which was available to accommodate the necessary components and assemblies. On the rectangular roof of the hull there was a shoulder strap of a relatively large diameter, which occupied almost the entire distance from side to side.

Tank Typ 245 was supposed to have a non-standard layout for German tanks of the time. In front of the case, there was only a management compartment with a driver’s workplace. The fighting compartment was located in the center, and the food was given under the engine and transmission. To reduce the size of the machine, the V-shaped engine had to be placed across the hull. It was proposed to maintain the power plant through a large hatch in the aft hull sheet.

The type of engine proposed for installation on the tank "Type 245" is unknown. Probably, the project could not reach the stage of selection of specific components that meet the requirements. Probably, it was planned to use a mechanical transmission, which provided the rotation of the driving wheels of the rear location. 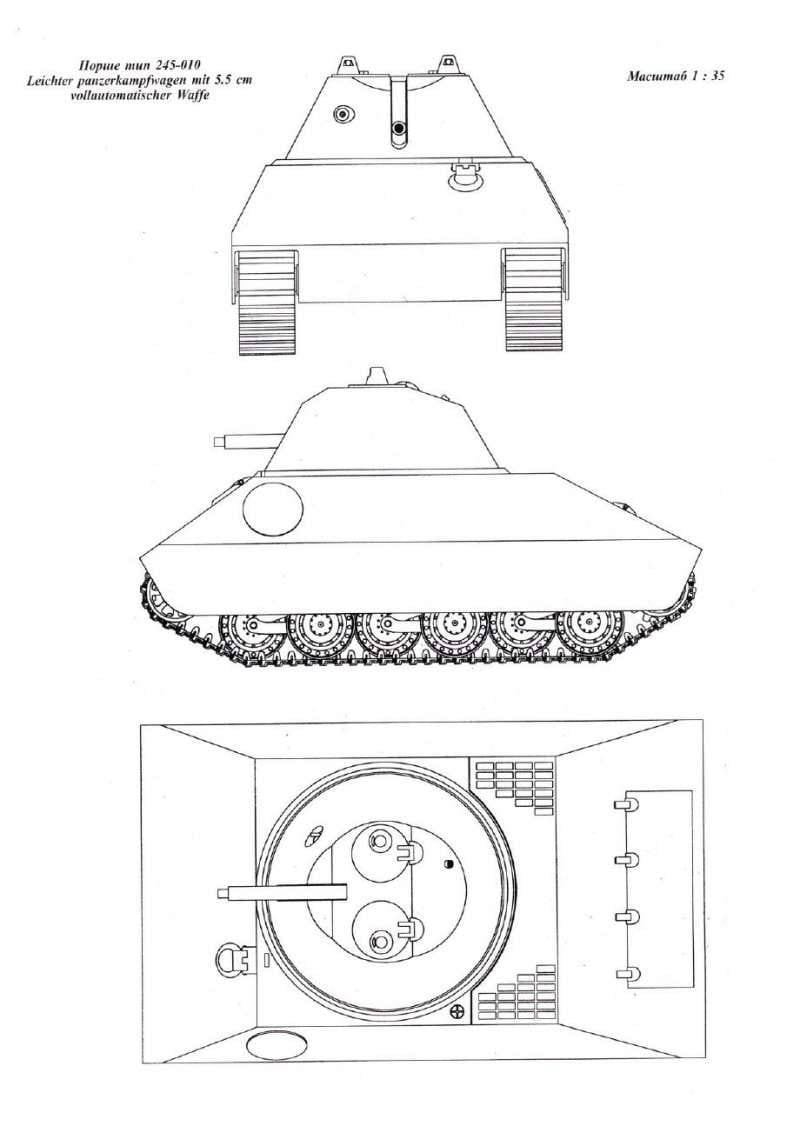 The composition of the chassis of the tank included six road wheels on each side. The rollers were assembled in pairs in blocks, which, in turn, were placed on the shock absorbers. In the front of the hull were placed the guide wheels, in the rear - leading. Need for support rollers, apparently, was absent.

The driver's seat was located in the front of the hull, with a shift to the left side. To monitor the situation, the driver had to use the viewing device in the front sheet. On the right side a round hatch was provided for access to the control room. Other tank crews were to be located in the swivel turret and get into the car through their own hatches.

The first version of the Typ 245 light tank envisaged the use of a conical tower with a flat roof. Inside the tower it was proposed to mount all the weapons and two crew jobs. As the main weapons For the tank was offered automatic gun MK 112 55 caliber mm. She had the opportunity to fire at a rate of up to 300 shots per minute and hit targets at ranges up to several kilometers. With a gun, it was proposed to use a twin machine gun MG 42 rifle caliber. To control the weapons were two tankers.

A new type of tank should have a battle mass of no more than 15 t. Mobility characteristics, etc. parameters were not determined due to the specifics of the project. In particular, the absence of the selected engine did not allow to evaluate the driving characteristics. 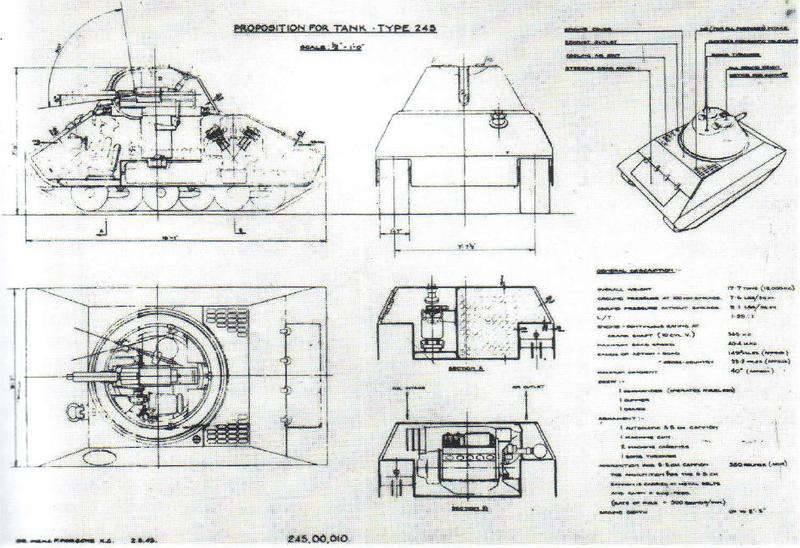 The first version of the light tank soon after the start of work received a new designation Typ 245 / 1, associated with the development of new versions. So, in the fall of 1943, the project “Type 245 / 2” appeared. As in the first version of the project, the creation of a light multipurpose tank with firepower and protection at the prototype level was meant. At the same time there were some differences from the basic project.

Of great interest is the third version of the tank - Typ 245 / 10, which became the answer to new challenges. In 1943, work began on several new projects of self-propelled anti-aircraft installations that were supposed to protect troops in positions and on the march. The company "Porsche" decided to develop a universal tank that can fight both ground and air targets. From the basic design of the universal tank "Type 245 / 10" differed modified turret and modified weapons. Thus, in the frontal part and in the roof of the tower, a large slot for pointing a gun with large elevation angles appeared. The gun mounts, from which the machine gun was removed, were modified accordingly.

The fourth version of the project, Typ 245 / 11, again implied the creation of a light reconnaissance tank. From other machines of the family, he differed in some features of the design and composition of equipment for observation and communication. At the same time, the possibility of using the 55-mm gun and machine gun was maintained.

The latest development of the family was the project Typ 245 Sonderfahrzeug V. This car was supposed to be a light tank designed for reconnaissance and escort columns. As in the case of other family projects, some innovations were envisaged, but the general ideas of the project remained unchanged. 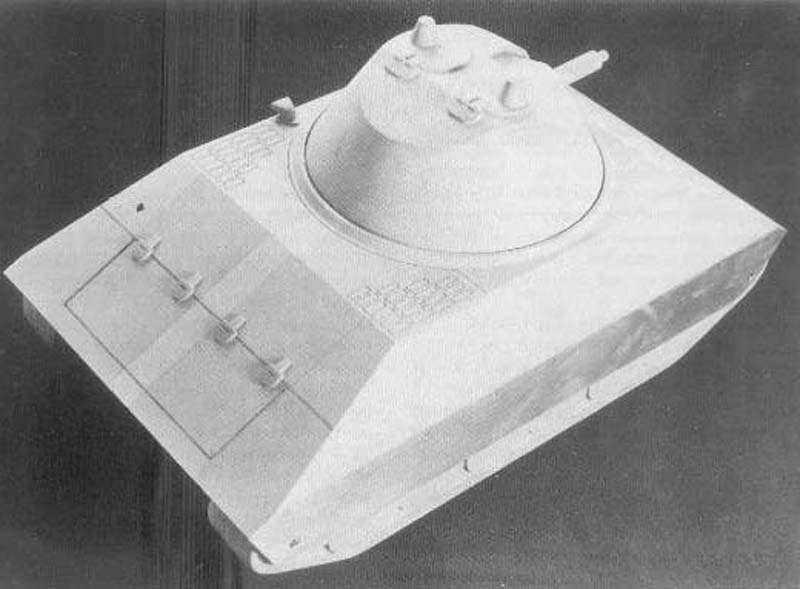 Projects of the “Type 245” family were offered to a potential customer throughout the entire year of 1943, but did not receive approval. Probably, the consistent appearance of several variants of one car was precisely the result of constant failures on the part of the army. Having not received approval for one project, the company-developer began to create a new one based on it, which has some differences from the first. Refusal of the second project led to the beginning of the development of the third, etc. For several months of such work, the company-developer managed to create several options for promising armored vehicles based on common ideas and solutions.

According to reports, during the second half of 1943, Porsche managed to create only a few preliminary projects within the framework of the Type 245 project, which identified only the most general features of the promising technology. In addition, wooden layouts of promising technology were demonstrated to the customer. Due to the lack of interest from the military, other models were not built, technical projects were not developed, and prototyping was not planned.

By the beginning of 1944, all work on the projects of light tanks of the “Type 245” family was discontinued due to the lack of real prospects. The curious ideas underlying these developments could not interest the command and get its approval. All work on light tanks of new types stopped. At the same time, the ideas and developments on the closed project did not disappear. In 1944, the specialists of Porsche created a project for the prospective self-propelled artillery type 255 or E-25. Nevertheless, this development remained on paper, without interest of the military.