The chief designer of VGO.I was Count Ferdinand Zeppelin, widely known for his airships, but already in 1914, he realized that the future belongs to aircraft heavier than air. In the same year he began to develop a heavy bomber. Not being able to stop building airships, as military orders for them were binding, he organized a new venture with the Gotha Aircraft Company specifically for building airplanes, calling it "Vershchsbau Gotha Ost" (abbreviated as "Gotha-Ost"). VGO. Versuchsbau is translated from German as "experimental" or "experimental production."

The count attracted a team of young talented aircraft designers, including Ernst Heinkel, Claudio Dornier and Adolf Rohrbach, to work on the project. The power plant was developed by an outstanding engine engineer, Wilhelm Maybach, and the electrical system was designed by Oscar Wilke and Robert Bosch. Not to the side and the future father of metal aircraft Hugo Junkers. Hardly ever again so many "rising stars" gathered under the roof of one KB.

The overall concept of the car was based on the pre-war project of a transcontinental passenger aircraft by the professor of aerodynamics Helmut Hirt. Undoubtedly, the first in the world four-engine bomber "Ilya Muromets" had a definite influence on the developers. However, the German aircraft can not be considered either a copy or analogue of the Sikorsky apparatus. With the exception of the biplane scheme generally accepted at the time, they do not show common features.

VGO.I was a three-engine biplane with one pulling and two pushing screws. One engine was located in the nose of the fuselage and two more in carefully profiled aluminum nacelles suspended between the planes on the legs of the biplane box. This arrangement made it possible to get by with relatively short landing gear when using large diameter screws with high efficiency. The wingspan of VGO.I reached 42 meters, which made it the largest aircraft in the world, and this title remained with him and his followers until the end of the First World War. For comparison, the frames of the upper wing of the “Muromts” did not exceed 34 meters.

The aircraft Osnat six-cylinder single-row liquid-cooled engines "Maybach" Mb.IV, similar to those that were on Zeppelin airships, For its time, these were quite powerful engines that developed to 245 hp. on takeoff mode. However, the reliability of their work, as they say, left much to be desired, due to which three mechanics had to be included in the crew, two of whom were seated in the engine nacelles. The total team size was originally 5 people.

In this form, the aircraft was sent for military trials on the eastern front. There he made combat missions as a long-range reconnaissance aircraft (there were no bomb hangers on him) until he crashed while landing, undermining the landing gear. To repair the car returned to the factory. There it was not only repaired, but two more “Maybachs” were installed in the engine nacelles in tandem with the previous ones. Thus, the device became five-engined, for each side screw worked on two engines. This made it possible to significantly increase the payload and turn the car into a full-fledged bomber, but again it did not hit the front.

In December, 1915-th disaster struck. In one of the test flights, immediately after separation from the runway, the right propulsion unit jammed on the airplane. Due to the asymmetry of the thrust, VGO.I sharply spun to the right, the pilots did not have time to counter the unfolding moment and the car crashed into a corner of the airship hangar on the edge of the airfield. Both pilots were killed, and the plane was completely broken and could not be restored. However, this did not lead to the closure of the program, since by that time the second prototype of VGO.II had already flown, which was initially made five-engine.

On the screen saver: VGO.I during flight tests, weapons have not yet been established. 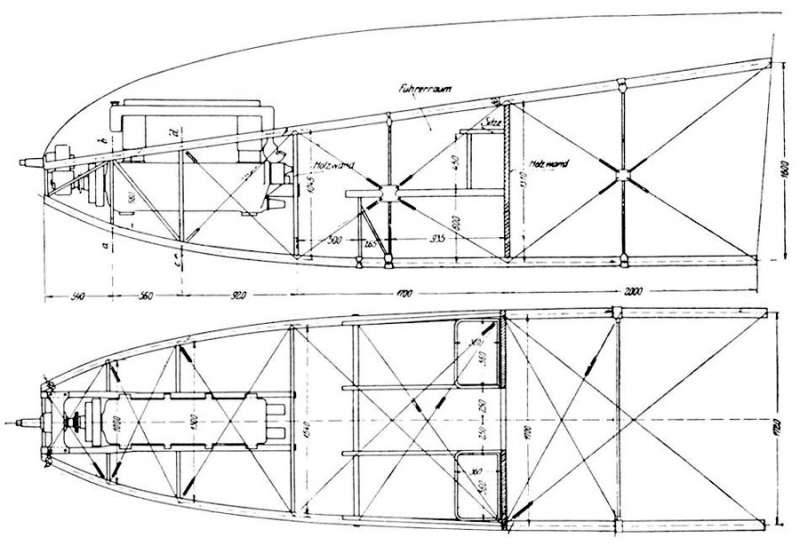 Drawing of the front of the fuselage VGO.I. One can see the pilots' seats and the nose motor. The frame of the aircraft was made of wood and reinforced with wire braces.

VGO.I before and after the first upgrade.

VGO.I at the frontline airport Alt Auz in Lithuania. 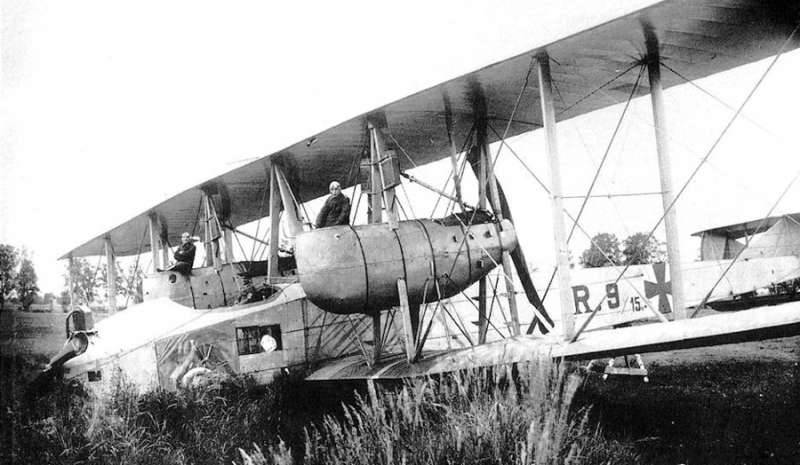 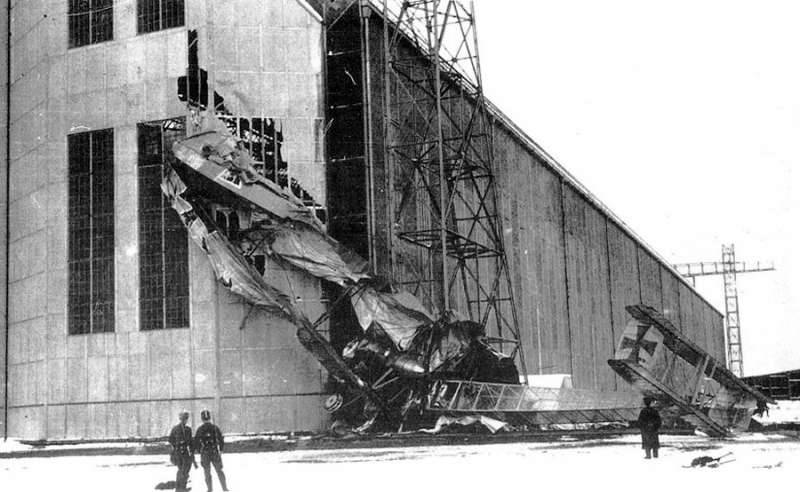 The crash of VGO.I at the airfield in Sneidemühl. Please note that the aircraft fuselage is sheathed with transparent cellon, obviously, to reduce visibility.