April 7 2016
38
Currently, the American company Desert, located in Utah, is one of the few small firms from the United States that are actively trying to work in the European market. In 2016, at an exhibition in Nuremberg, the company demonstrated the Desert Tech HTI, an unusually lightweight for its class and elegant anti-material rifle. Currently, this large-caliber sniper rifle production armory Desert Tech (formerly Desert Tactical Arms, DTA) from the homeland of the famous John Browning is, if not the most compact, then one of the smallest of all large-caliber sniper rifles in the world.


Today, almost all large-caliber sniper rifles are a modern rethinking of anti-tank guns during the Second World War. In this case, all large-caliber rifles are anti-material. Already in this definition of them and laid down their main purpose. Such rifles are excellent for defeating conventional and lightly armored enemy wheeled and tracked vehicles, disabling reconnaissance, control and communications equipment (for example, radar antennas) of the enemy, destruction of airplanes and helicopters at airfields, destruction of protected firing points (firing on embrasures and DOTO viewing instruments). Just one shot of such a rifle can inflict tangible financial and material losses on the enemy.

Naturally, this type of weapon can be used to defeat the enemy’s manpower, but this is not a specialized option for using this weapon. If the sight of the arrow of such a rifle is an enemy, then most likely it is an enemy sniper. All large-caliber rifles are often used precisely as anti-sniper weapons. They significantly surpass ordinary sniper rifles in effective firing range, as well as bullet energy, which is reflected in their field of use in combat conditions. 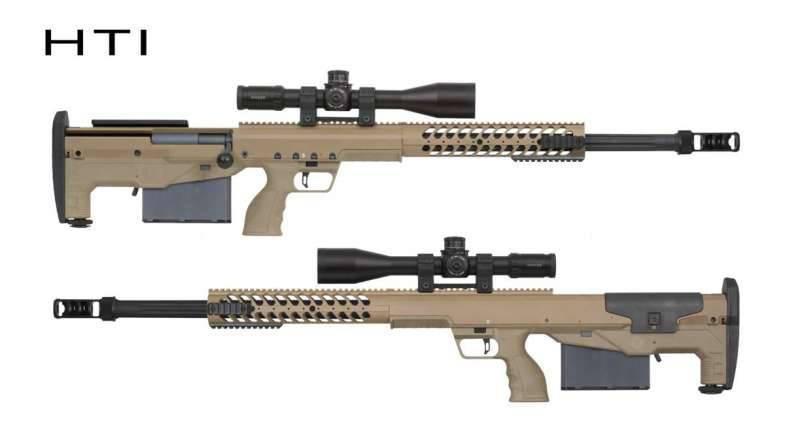 Such a weapon is distinguished by its large dimensions, mass and recoil. Therefore, gunsmith designers around the world are trying to reduce these parameters as much as they can, while retaining all the combat characteristics of rifles. The Desert Tech HTI large-caliber rifle is one of the few rifles, and indeed, weapon models that combine light alloys and polymers, but to the extent that the weapon does not lose its fighting qualities and remains easy to handle. The basis of its design is the bearing aluminum tire, on which the polymer bed and the steel receiver are mounted. Naturally, the American designers sought to reduce the mass and reduce the size of their offspring, but approached the solution of this problem without fanaticism, within reasonable limits. In this case, the rifle compares favorably with the common models of the company Barrett price. Low cost was achieved due to a significant simplification of the process in the production of the main elements of an anti-material rifle, which do not require special attention. In this case, the barrel of the weapon is made with special care, and tolerances in its production are minimal.

This sample of firearms was first shown by Desert Tech from Salt Lake City still 1 in May 2012 of the year as a modular anti-material sniper rifle, made in the bullpup layout, while the rifle was also available to customers in the civilian market, for example, shooters athletes. The Desert Tech HTI (Hard Target Interdiction) large-caliber rifle is a further development of another SRS / PSR (Stealth Recon Scout / Precision Sniper Rifle) sniper rifle, which was developed even 2008 year under the apparent influence of the German-made DSR-1 sniper rifle. SRS / PSR rifles were made in several different calibers from .243 Win to .338 Lapua Magnum.

A gun company from Utah, this weapon is positioned as a more compact and lightweight alternative to the large-caliber Barrett M107 rifle, which can be used even in the most extreme climatic conditions and hit targets at ultra-long distances. In particular, when it appeared in the Western media that an Australian sniper in Afghanistan hit the Taliban militant at record 3079 yards (2815 meters), the comparative shooting at the same state desert Utah. Desert tests have demonstrated that the Desert Tech HTI rifle is able to confidently hit targets with a height of 4-6 feet (a tall figure) at a specified distance.

Despite the fact that the name of the American company Desert Tech, which was founded only in 2007, is known today mostly to specialists, rifles of this company are quite common. In particular, the SRS sniper rifle is used by the US military (including in Afghanistan), as well as by the American SWAT police special forces, it is in service with the security forces of other countries. According to representatives of the company Desert Tech, the monthly release of this sniper rifle is approximately 250 units.

The DTA HTI anti-material sniper rifle is made in a bullpup layout, which significantly reduces its length, and also positively affects the accuracy of fire. It is worth noting that this scheme is quite popular for large-caliber rifles. For example, in Russia, the 12,7-mm KSVK and ASVK rifles (large-caliber army sniper rifle, adopted by the Russian Armed Forces in 2013) were made in the same layout. The American Desert Tech HTI rifle is a non-automatic magazine rifle with a sliding bolt lock. Due to the bullpup layout, it is significantly shorter (1162 mm versus 1448 mm) and lighter (9 kg versus 14 kg) of the standard large-caliber rifle of the US Army Barrett M107. It is currently one of the lightest and most compact in its class. This was achieved, in particular, through the use of modern lightweight structural materials, which include aviation aluminum alloys (7075-T6), high impact polymers, and high strength steels. The monolithic receiver of the rifle was made in the form of a full-size chassis, which does not require the use of a special interface for landing the barrel in the box. The heavy barrel of a large-caliber rifle has longitudinal lobes, which are designed both to significantly reduce the weight of the barrel, and for better heat transfer. The barrel is equipped with a massive four-chamber muzzle brake type DT QD, which is mounted on the M25x1.5 6G thread and equipped with a special sleeve for protecting the thread.

The HTI anti-material rifle is equipped with quick-change barrels. Also in addition to the weapon, in addition to a set of barrels, there are also shutters for different calibers, which makes the weapon modular. On the Desert Tech website, it is available with four different barrels, in four different calibers from 9,5 to 12,7 mm. All rifle barrels are staffed with a powerful muzzle brake. Naturally, with the 12,7 mm caliber (.50 BMG), using a rifle for silent shooting devices is difficult, but a barrel with a thread for a silent shooting device can be made to order. However, in such cases, most often with the weapon use special subsonic cartridges of caliber .50, and the effectiveness of the rifle with them is significantly reduced. The barrels in the weapon are quick-changeable; they do not require any additional tools from the shooter for the replacement procedure. Replacing the barrel can be done in just one or two minutes. This, of course, is not a record figure, but, according to experts, quite impressive. 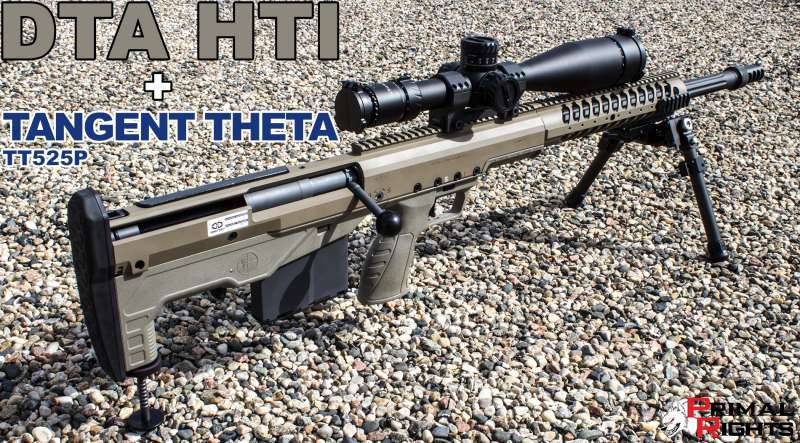 The HTI large-bore rifle has a manual reload with a longitudinally sliding bolt that locks the barrel into three lugs. The trigger used on the rifle can be adjusted by pressing force on the trigger in the range of 0,5 kg to 3 kg. An interesting solution seems to be the management of a weapon safety device The fuse is controlled by moving the wheel, which is located above the trigger. This allows the shooter to both put the weapon on the fuse and remove it from it, even without being distracted from the telescopic sight. Despite the fact that the fuse control element was placed on both sides of the weapon, the rifle is not adapted for firing from the left shoulder. The left-handed shooter will be forced to reload a lot of extra movements when reloading the weapon, which may declassify his position. However, when firing anti-material rifles, you can determine the approximate position of the shooter after one or two shots.

The Desert Tech HTI rifle is powered by cartridges from specially designed box magazines designed for it, designed for 5 cartridges. The latch of the store allows you to change the store with one hand, so that at the time of the execution of this operation sniper manufacturing does not change. The design feature of the store of this American rifle is the presence of a stop for the liner shoulder, which prevents the bullet tip from hitting the front wall of the magazine due to strong recoil when fired. In stores that do not have such a device, the bullet head can be deformed during a collision, which adversely affects the accuracy of shooting. In addition, large-caliber sniper rifle is equipped with an adjustable cheek, butt pad as well as an additional rear support. In fact, a soft rubber butt pad to soften the recoil of the shot and the extra leg-support under the butt became mandatory elements for all modern anti-material rifles.

The rifle is provided immediately 14 points for attaching a gun belt, which allows you to optimally balance the weapon when it is being carried. The long Picatinny rail MIL-STD-1913 allows you to mount various aiming devices on the rifle, including thermal imaging and night vision. In this case, the open sights on this rifle are missing. Additional guides are also placed on the rifle's shank, around the barrel, which allow a wide range of various accessories to be used with the rifle. 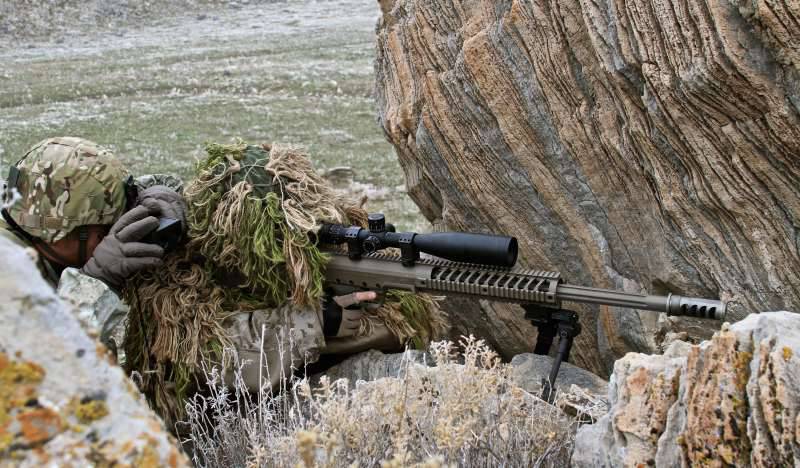 The rifle comes with two magazines and an instruction manual. In addition to the 12,7 mm (.50 BMG) caliber, it is also available in .375Cheytac (9,5 mm), .408Cheytac (10,3 mm) and .416 Barrett (10,5 mm) calibers. Thanks to the implementation of the modular design, the rifle can be easily and quickly converted to any of the calibers. This operation will not take a lot of time from the shooter, but will require the acquisition of the HTI DT Conversion Kit in addition to the rifle.

According to representatives of the American company Desert Tech, the HTI rifle has already been acquired by a number of states, in particular, it was purchased in Ukraine. This information was confirmed in October 2015 by Igor Ignatiev, director of Tactical Systems LLC, which is the Ukrainian partner of Desert Tech. The details of the contract are not fully disclosed, but it is known that the first rifles of this model in 2015, have already entered service with snipers of the SBU and the National Guard. In the same year, the US State Department approved a license to export ammunition for large-caliber sniper rifles to Ukraine, including .50 BMG.