“In the blue Antilles Sea, the Caribbean is also called him, izlestan evil ramparts, decorated with openwork foam, rocks Cuba on the map: a green long lizard with eyes like wet stones,” the poet Nicolas Guillen painted the Island of Freedom. And he warned Washington: “But you, a seaman standing on a strong guard by the sea, remember the high copies of the sparkling, the language of the tongues of fire and the lizard that you woke up to pull the claws out of the map!” Lizard finally woke up at the very beginning of 1959, and the Soviet Union helped her to find sharp claws.

Cuba became the military outpost of the USSR in the very underbelly of the United States, which experienced in 1962 a tremendous shock from Russian nuclear warheads, whose launch positions - even for a short time - settled among the palm forests of the rebellious island.

Equipped, as they say, to the teeth of the Soviet weapons, The revolutionary armed forces (PBC) of Cuba quickly became the strongest in Latin America. Already by 1961, Castro’s army far surpassed all other Central and South American states combined in armored power, receiving 150 “thirty-four”, 41 heavy IS-2 and several dozen self-propelled guns SU-100. They played a role in 1961 in the defeat of the "Guanos" landing in the Bay of Pigs. They say that Fidel himself with a well-aimed shot from the SU-100 hit one of the ships equipped with the CIA, and the T-34-85 did not allow the ships of the US Navy to evacuate those who tried to flee the island of counter-revolutionaries from the island. Five lungs looked like nonsense against this background tanks M41 "Walker Bulldog", with which the Yankees supplied those same "gusanos." And the ousted Batista four years earlier had been delivered as many as seven medium Shermans, who ultimately fell into the hands of the rebels (against whom they were intended). One of those Shermans with the triumphant Fidel entering Havana can be seen on the Cuban bill in one peso.

In the future, the equipment of the Cuban army with Soviet and partially East European military equipment only increased. The Republic has acquired a strong military aviation and “biting” the military fleet with ship-to-ship missiles (the first in Latin America). The Soviet units withdrawn from Cuba at the end of the Caribbean Crisis left even exotic equipment such as the FKR-1 ground-to-ground class Fidel, taking only nuclear warheads to them. Cubans loved to carry these gifts in parades.

By the middle of the 80, more than 200-thousand RVS had over 600 tanks (according to some data, up to 900) - from light PT-76 to medium T-62, hundreds of armored personnel carriers and infantry fighting vehicles, powerful caliber artillery to 152 mm inclusive, tactical and anti-aircraft missile systems, near 170 fighter jets (MiG-17, MiG-19, MiG-21, MiG-23), three diesel submarines of the 641 project, a pair (later three) specially designed in Zelenodolsk for export of the new 1159T project guard and three ten 183P, 205 and 205U missile boats. Cuban troops demonstrated excellent training in Angola and Ethiopia, performing combat missions in the interests of Pax Sovietica. In short, it was still that thorn, stuck in the ass Pax Americana and much more durable than the other allies of the Warsaw Pact (the question of what turned the content of Pax Sovietica, leave this article).

Along the way, Havana solved her own problems by force. For example, in 1977, the Dominicans did not cobble too long with the release of the detainee from a Cuban civilian ship: the afterburning flight of a dozen MiG-21 stunned their capital, Santo Domingo, quickly brought the banana republic leadership to their senses.

The collapse of the USSR was especially painful for the air and naval forces of Cuba. The shortage of spare parts, components and just modern models of military equipment was keenly felt by the ground forces. 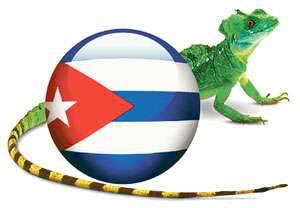 But the Cubans do not give up. Today, Freedom Island is not only a panopticon of the American autoclassic, but also a unique workshop of military equipment, also "vintage". It's amazing how Cubans manage to cope with the weight culture in the prepared products, which are not at all intended for what the local Kulibins do with them. The explanation is one: the equipment is Soviet, strong.

In the measures on "re-equipment" a bet is placed on the extension of the service life of elements of Soviet military equipment that are suitable for use, and the machines themselves have become unusable. This, for example, is about the combat modules of the BMP-1 (the tower with the 73-mm Thunder instrument and the Malyutka ATGM launcher) and the 100-mm D-10T tank guns, taken from the T-54 and T-55 tank guns . "Top" BMP-1 without any alteration is installed on the chassis of wheeled armored personnel carriers BTR-60PB. In the second case, lightweight towers of local design with an 100-mm tank gun are mounted on the same base. By the way, this wheeled infantry fighting vehicle practically repeated the Soviet experimental BMP GAZ-50, created in 1971 on the same chassis and with the same weaponry. With the only difference that the “Malyutka” anti-tank missile system used by Cubans is not the original Soviet system, but, apparently, the Chinese modification HJ-73C or HJ-73D with semi-automatic guidance and tandem warhead.

On some Cuban BTR-60PB, the roof was completely cut off, and in the troop compartment, an 23-mm paired anti-aircraft gun ZU-23-2 was installed. Similarly, the old BTR-152 open type armored personnel carriers are used (this is no longer Cuban know-how, but rather a self-made 152 modification that is quite common in the countries of Asia and Africa).

This kind of metamorphosis Soviet military equipment began to undergo in Cuba for a long time - the picture of Fidel Castro in the prime of life on the background of the BTR-60P, converted to self-propelled gun with the Czechoslovak 30-mm paired automatic anti-aircraft gun M53 / 59, is known. On the part of the BTR-60PB mounted rotating Spark 37-mm automatic anti-aircraft guns.

T-34-85 also adapts to the self-propelled installation of various types. These are the ACS with the 100-mm anti-aircraft gun KS-19 on a rotating platform and two versions of the 122-mm self-propelled howitzer based on the D-30A. In one case, the gun was installed in a tank tower with armor cut off in front and on top, in the other - the tower was removed, and the gun was placed in an open wheelhouse like German self-propelled guns of the Second World War period, created, in particular, on the basis of captured French tanks (something like D -30 and "thirty-three" at one time the Syrians were making). Part of the Cuban T-34-85 converted into 130-mm self-propelled guns with openly installed M-46. There is also an anti-aircraft version of the thirty-three with the 57-mm C-68 pairing from the Soviet ZSU-57-2.

Two local modifications of the BMP-1 were observed: the tank destroyer (a kind of Cuban Ferdinand) with the X-NUMX-mm tank gun D-100T and a self-propelled howitzer with the D-10A, also installed in the rear of the hull, but in an open-top armor jacket. The improvised self-propelled guns of the Soviet Union complemented a decent, by Latin American standards, park of Soviet-made self-propelled howitzers (30 40-mm “Gvozdik” and 122-mm “Acacias”).

But that's not all. Cubans liked the KrAZ-255B army trucks. On their chassis created a whole family of self-propelled guns "Jupiter". AT stories there are similar examples: for example, in the 30-ies the 76-mm SU-12 was adopted on the armament of the Red Army on the chassis of the three-axle GAZ-AAA.

On the "Jupiter" of the first generation installed 130-mm gun M-46 and 122-mm howitzer D-30A. In the second generation, the chassis itself underwent significant alteration - it was made two-cabin in the manner of the MAZ-543. On the platforms of such “Jupiter”, both the M-46 and the second Soviet 122-mm A-19 cannon of the 1931 / 1937 model, which had a self-propelled variant reasonably equipped by the Cubans with a two-chamber muzzle brake following the D-30 model, are installed.

Another local development is the 120-mm mortar based on the BRDM-2. By the way, a very reasonable decision. From the body of the truck so especially you do not shoot, but from a specially prepared BRDM-2 just right.

By increasing the maneuverability of artillery in such an original way, the Cubans did not forget about the anti-aircraft missile systems of the target air defense. They turned the semi-stationary C-75 and C-125 into self-propelled ones by placing missile launchers on the T-55 platform. For the C-125 self-propelled variant, a new transport-charging vehicle based on PT-76 was created. Here, it should be noted, Cubans are not first movers. The Chinese C-75 self-propelled tracked versions (HQ-2B on special chassis), C-125 - Poles (Newa SC complex based on T-55, very similar to Cuban) created their own versions, and on the car platform they are found in North Korea (for example, C 125 on KrAZ-255B).

Helicopter carrier from a trawler

The basis of the reactive artillery are the Soviet BM-21 "Grad", BM-14 and BM-24. But there are also samples. Under the name “Kanimar-57” there is a former self-propelled Strela-1 anti-aircraft missile system launcher (based on the BRDM-2), in which, instead of the transport-launch containers of the SAM, a pair of 32-charging aviation blocks UB-32 with 57- is suspended mm unguided rockets C-5. Such use of “ereses” is quite widespread in various kinds of conflicts, including in the territory of the former USSR.

The inimitable development of the Cuba RVS is the MLRS, which is a combination of a car chassis and an anti-submarine 212-mm 12-barrel rocket-propelled bombing unit Sberch-6000. This miracle of technology, apparently, turned out after the cancellation of three ships of the project 2T, each of which had two RBU-1159. So we can assume: RVS have a battery of six such MLRSs, even though there was a reserve of RSL-6000 depth-attack jet bombs, with which the Cubans are ready to ohazhivat and land enemy.

The exclusion from the fleet, apparently, due to the technical condition of all the 1159T frigates (one of them was sold after writing off to some private company that flooded it at the Cayman Islands for the fun of diving) deprived the Cuban Navy of more or less large surface ships. But even here, ingenious islanders carried out "import substitution" by arming the 3200-ton large fishing trawler "Rio Damuji" of the Spanish-built 1972 of the year. There are two single-container PKR P-20 launchers (export version of the P-15U), removed from the outgoing 205U project missile boat, an artillery unit with the 100-mm tank gun D-10T, the ship's 25-mm paired anti-aircraft gun 2XXXXXXXXXXXXXXXXXXXXXXXXXXXXXXXXX. machine gun DShK. On top of that, there is a helipad on the trawler. Of course, on the one hand, it turned out the devil knows what, and on the other - Cuba demonstrated one of the options for mobilizing the fishing fleet. Subsequently, realizing the futility for such a tank gun ship, the Cubans replaced it with an 3-mm AK-12,7 twin automatic gun mount, removed from the 57M hydrofoil torpedo boat (nine units were delivered to Cuba by the Soviet Union in 725-206).

There was an unexpected use of 533-mm single-tube torpedo tubes OTA-53-206М dismantled from these boats. Cubans installed a torpedo tube on a kind of catamaran from motor boats (at least two such "torpedo boats" are known). And the observant foreigners reported that they had seen a super-small submarine in the port of Havana. Considering Cuba’s ties with the DPRK, which has become more experienced in the construction of such babies, maybe.

Of the nearly two dozen rocket boats of the 205 and 205U projects donated by the USSR in 1972 – 1982, only six are left in the Cuban Navy system. The naval command that was removed from the decommissioned PU-20 missile launches was decided to be placed on trailers, equipped with such Bandera (Flag) translated from Spanish) coastal defenses in addition to the existing Soviet Rubezh self-propelled anti-ship missile systems.

In short, the Revolutionary Armed Forces of Cuba are not going to give up their positions in the region. And when the urgent need for further weapon improvisations disappears, God knows.