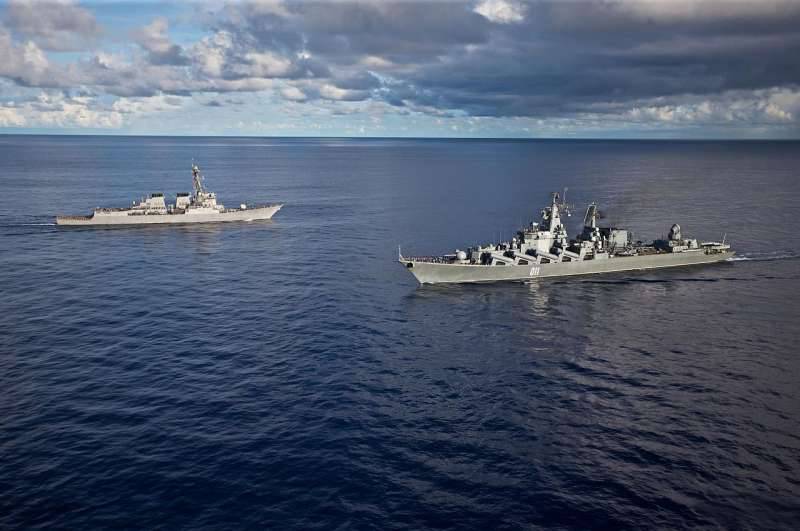 There is no reason for scientific analysis. The Russian Navy and the US Navy exist separately from each other, in different time eras. Just like the fleets of the First and Second World War.

Statistical methods do not work. In case of multiple quantitative discontinuity, it does not make sense to count the average age of the ship personnel. As well as determine the% ratio of new and old ships. In reality, these% will be expressed by a different number of ships for each of the fleets. Too different to take this calculation seriously.

The phenomenon of “average temperature”

It is enough to exclude from the calculations “obsolete equipment” (ships built before 2001), as it turns out the unexpected. For the first 15 years of the century, American shipyards transferred the fleet 36 destroyers (including the experimental Zamvolt and Burke-shaped Finn, which have not yet officially been accepted into the Navy, but have already been launched and put to the test).

PCU (pre-comission unit, object under completion) John Finn. It will take another couple of months, and the PCU code will change to USS (United States Ship).

No less serious results were shown by the shipyard “General Dynamic Electrical Electric”. During this period, the Virginia-class multipurpose 12 multi-purpose nuclear submarines and one submarine for special operations Carter (Sivulf class) were put into operation.

Of the big players, there are two nuclear aircraft carriers, Reagan and George Bush. Another (“Ford”), recognized as the largest warship in stories, was launched in 2013 g., this fall it will replenish the combat strength of the Navy.

From other aircraft carriers were built:

- a helicopter carrier with the unexpected name “America” (air wing from 30 helicopters, “Harriers” and F-35);

From the exotic - sea radar base of the missile defense system, designated SBX.

The next item is the six high-speed coastal zone warships (LCS), duplicating the tasks of patrol, minesweepers and submarine hunters.

Of the other large units: 11 amphibious assault ships of the type “San Antonio” and two naval terminals for the over-landing of armored vehicles: “Glenn” and “Monford Point”.

In total, a “brigade” of seventy ships of the ocean zone with an average age of less than ten years. Here you have all the statistics.

Excluding the “obsolete” ships built during the 1980-90x period, the “Nimitz” (1975 g) remains the oldest active ship. However, age is not so bad for aircraft carrier ships. Their main weapon is constantly evolving. Over the past 40 years, three generations of the marine have changed on the Nimitz deck aviation (“Phantom” - F-14 - “superhornet”).

And again about the Russian threat

In reality, everything is somewhat different than on the beautiful trailer of the Russian fleet. The success of domestic shipbuilders, expectedly, turned out to be much more modest.

Four diesel-electric boats pr 636.3 (modernized "Varshavyanka"). Thirty years ago, such “black holes” posed a mortal threat, however, at the beginning of the XXI century, the balance of power changed somewhat. The boats do not have enough anaerobic SU, without which they cannot survive in the conditions of modern PLO (they are forced to surface once in 3-4 of the day instead of two or three weeks for foreign analogues).

Of the surface units - five frigates ("Gorshkov", "Kasatonov", "Grigorovich", "Essen", "Makarov"). Four of them have not yet been officially commissioned, but we can confidently speak of them as of built ships. The main work front is over; three frigates have already reached the stage of mooring trials and GSI. 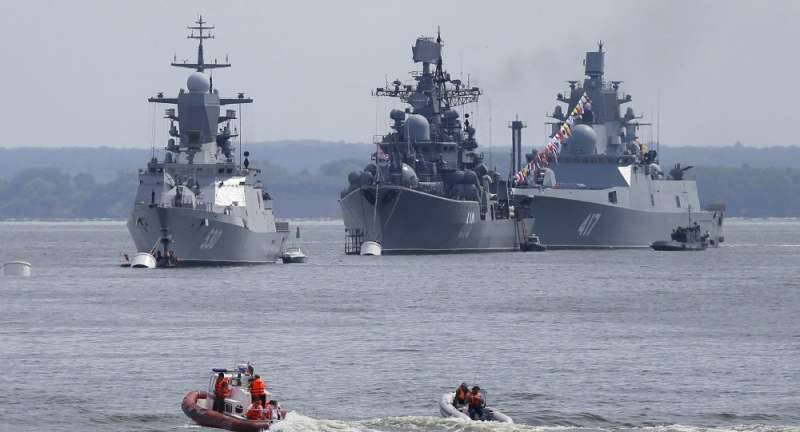 Corvette, Destroyer and Frigate
If desired, you can add to the list another seven corvettes, pr. 20380 and 11611. Talking about smaller units - IAC and IRA does not make sense.

What is a corvette or a small rocket ship?

On the night of October 7, 2015, the grouping of the ships of the Caspian Flotilla as part of the Dagestan rocket ship and three small rocket ships of the 21631 project produced group start 26-ti missiles 3М14 "Caliber-NK" on the objects of the Islamic state in Syria.

The volley of small ships of the Caspian Flotilla is equal to half the volley of the destroyer “Berk” (96 launchers). Further comments are superfluous.

Unlike smaller ships, the destroyer is still capable of hitting ballistic missile warheads and shooting down satellites in low near-earth orbits. Apart from large hydroacoustic stations, helicopters and other military equipment on board.

In this sense, the combat value of the “babes” is greatly exaggerated. Did someone seriously decide to equate the IRAs to destroyers? Well, the statistics will endure.

About the technical factor do not like to remember at all. The harsh truth is that, in principle, the Navy of the Russian Federation, like other fleets of the world, lacks the equipment available to American sailors.

The naval base of missile defense, submarine rocket bombs carrying Tomahawks in their 150 ridges, rocket-artillery destroyer and Aegis six-watt radar ...

At one time, trying to stay at the peak of progress, the USSR generated a lot of fresh and unique counter-solutions (super-heavy anti-ship missiles, titanium submarines, the Legend space system of intelligence).

The modern Navy has to be content with only those of the available technologies, the implementation of which does not require large expenditures. The result is what you would expect.

Fleet is not only ships. This is to a large extent naval aviation.

The potential of naval aviation of the Russian Navy undoubtedly increased with the start of deliveries of deck fighters MiG-29K (4 units) and coast-based fighters Su-30CM (8 units for Black Sea Fleet aviation).

On the other side of the scale - five hundred F / E-18E and 18F “Super Hornet”, put on the decks of American aircraft carriers with the beginning of a new century.

Among other foreign innovations is the creation of the Triton patrol drone (modified for the marine tasks of the Global Hawk UAV). The 15-ton apparatus with the 40-meter wing and the radar of the circular review, capable of inspecting a day before the 7 million square meters. kilometers of ocean surface. In addition to the radar with an active headlamp, the drone's tools include electronic reconnaissance equipment and a set of optical sensors with a laser rangefinder for visual target recognition. The newest history of the fleet.

Favorite occupation of our “sofa experts” is the deliberately meaningless comparison of the potentials of the fleets of Russia and the USA. It contains no more sense than the mention of “pampers” and regular articles about the concern of the American command in connection with the “growing lag in the field of naval armaments from Russia and China.” The accumulated potential is so great that American admirals can “not climb the bridge” until the middle of the century.

Unlike them, it is contraindicated for us to relax. The above statistics clearly shows how effectively the rearmament of the Russian Navy is proceeding. And how much remains to be done in order to achieve, if not equal (which is impossible for either economic or geopolitical reasons), then to an adequate level compared to the “likely adversary”. Moreover, immediately declare such an armada as an adversary too recklessly. It is better to do everything so that the US Navy remains an ally, or at least a neutral.

Otherwise, why rush into a battle in which it is impossible to win?

However ... The quantitative and qualitative level of the Russian Navy and the United States is such that they are less likely to engage in battle with each other than ships of the period of the First and Second World War.

On the positive side, it is necessary to recognize that the current situation is not new and has its own logical explanation of its geographical nature. The history of the Anglo-Saxons is inextricably linked with the sea. Everything is completely different with us.

Hand on heart, we ask: what serious military consequences did Tsushima have? Did the Japanese reach Moscow? No - that's the whole answer. As well as the loss of part of Sevastopol during the Crimean War and its re-occupation during the Second World War. All of these were completely insignificant, minor troubles for a huge land power. 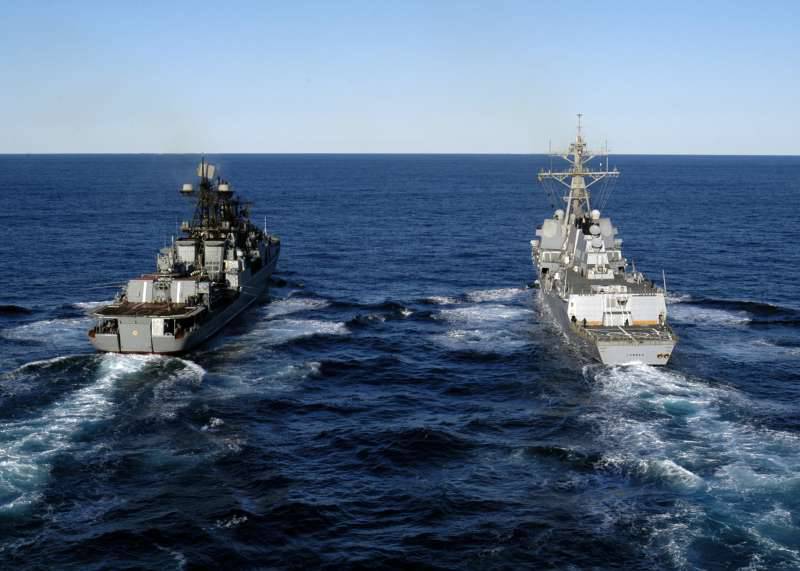 “Chained together”: BOD “Admiral Panteleyev” and the destroyer “Lassen”. Testing refueling on the go at sea.