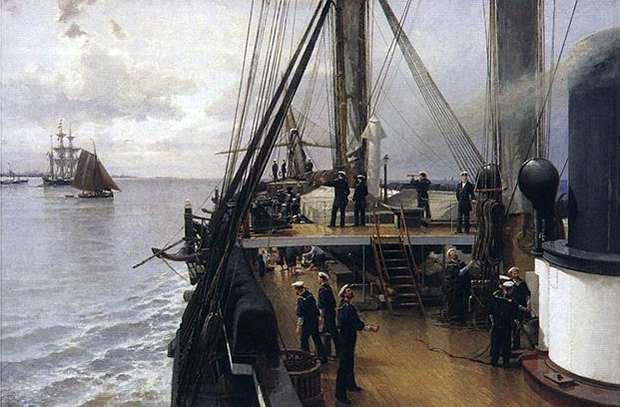 The first ship in Russia was built in 1815 year. Three years later, the Baltic Fleet received its first steam ship, and two years later the first steamboat appeared on the Black Sea Fleet. However, these were precisely unarmed tugboats, equipped with a steam engine and paddle wheels - they were intended for cargo transportation and towage of sailing ships of the military fleet.

And only in the spring of 1823, the first ship, armed with cannons and adapted not only for auxiliary work, but also for military operations, was laid in the shipyards of the Nikolaev Admiralty. The first military ship of Russia was intended for the Black Sea Fleet - in the Baltic after the victories over Sweden, our country did not have strong opponents at that time, but in the Black Sea region relations with the Ottoman Empire remained traditionally difficult. Therefore, the first combat ship of Russia began to build here.

The initiator of the creation of the first armed ship was the commander of the Black Sea Fleet, Vice-Admiral Alexey Samuilovich Greig, an experienced sailor who repeatedly made long-distance voyages in the Pacific Ocean, who fought both in the Mediterranean Sea and in the Baltic. Admiral Greig commissioned the construction of the first military steamer to one of the best shipbuilders of Russia of that time - Colonel of the Ship Engineers Corps Ilya Stepanovich Razumov.

Ilya Razumov studied shipbuilding in the shipyards of St. Petersburg, in England and Holland. At the beginning of the 19th century, during the wars with France and Turkey, he was a senior shipmaster in the squadron of Admiral Greig, who set off from Kronstadt to fight in the Mediterranean Sea. In the nineteenth-century 20, only in Nikolaev did Colonel Razumov build the 40 ships, while he participated in the creation of over a hundred ships.

The construction of the first combat ship, named “Meteor”, was carried out for two years. In the summer of 1825, the ship was launched and after all the work and testing of the steam engine was completed, it became part of the Black Sea Fleet. The ship with a length of almost 37 meters and a width of over 6 meters was armed with 14 guns.

His two steam engines with a total power of 60 horsepower were manufactured in St. Petersburg at the plant of the Scottish engineer Charles Breda who accepted Russian citizenship. The steam engines allowed the Meteor to reach the speed of a 6,5 knot (over 12 km / h) even with complete calm with the help of two paddle wheels.

Two years after the launch, the Meteor steamship successfully took part in the hostilities. After the start of the Russian-Turkish war of 1828 – 1829, one of the main tasks of the Russian Black Sea Fleet was the capture of Turkish fortresses on the coast of the Caucasus. The outpost of the Turkish army, threatening the Crimea and Kuban, then was a strong Turkish fortress Anapa. At the end of April 1828, the main forces of our fleet approached it - seven battleships and four frigates with a considerable number of landing and auxiliary ships.

In this campaign, the squadron was accompanied by the battle ship "Meteor". 6 May 1828, the Black Sea Fleet began a landing operation to assault Anapa. The Turks counterattacked our disembarked troops, and here the Meteor manifested itself - sailing ships could not operate freely very close to the shore because of the shoals and the wind blowing from the mountains, and the ship, having a small draft and freedom of movement, easily moved from one place to another near the shore and cannon shots hit the enemy.

It was the actions of the steamboat not dependent on the winds that allowed our troops to successfully consolidate on the coast near Anapa and besiege the fortress, which fell a month later. So, thanks to “Meteor”, the Black Sea port became Russian and later turned from a Turkish fortress into a famous resort.

The successful participation of “Meteor” in that war did not end there - the following year, he participated in the storming of Turkish fortresses on the coast of Bulgaria, including the most heavily fortified Varna. In October, 1828, after the capitulation of Varna, Emperor Nicholas I returned from the Bulgarian coast to Odessa on the sailing battleship "Empress Maria". The sailing ship with the Russian emperor in case of calm and other unforeseen circumstances was accompanied by the steamer "Meteor". The ships arrived safely in Odessa, sustaining a brutal storm that lasted several days.

Thus, the laid-out 29 of March (17 of old fashioned march) 1823 of the year “Meteor” successfully opened the era of the military steam fleet in Russia.