Kyrgyzstan and Tajikistan are members of the CSTO, personifying in this organization the concept of “consumer security”. Both countries are unable to protect themselves because of the extremely limited economic, scientific, technical, military, and even, despite the high fertility, demographic potential.

The situation is aggravated by the fact that at the end of the 80-s and in the 90-s a large part of the non-indigenous (primarily Slavic) population was expelled from Kyrgyzstan and Tajikistan, which dealt a severe blow to the economies of both countries and sharply limited the possibilities of military construction. At the same time, both of them are in an extremely complex geopolitical situation that threatens their statehood. In the south - Afghanistan and Pakistan, the sources of radical Islamism (the second with the nuclear power). In the west - Uzbekistan, which can be dangerous both in the current state of a full-fledged state, and even more so if it turns into another hotbed of religious extremism.

In the east - China, slowly but surely drawing Kyrgyzstan and Tajikistan into its orbit in a peaceful - economic and demographic way. However, for these two countries, it is senseless to regard China as a potential adversary due to the absolute incompatibility of military capabilities.

The land forces of Kyrgyzstan are divided into Northern and South-Western regional commands.

There is also a 3-I anti-aircraft artillery brigade.

The Kyrgyz Air Force was armed with about 100 MiG-21 fighters, but now they have all lost their combat capabilities. The only aircraft that can apply weapon, are 4 training L-39 (can be used as light attack aircraft). There are 4 passenger aircraft - 2 Tu-154 and 2 "Boeing-737", intended for the top management of the country. The Air Force also includes from the 2 to 6 helicopter Mi-24 and 9 – 19 multi-purpose Mi-8.

The only military-industrial enterprise in the country is the Dastan plant, which produces conventional and reactive ("Flurry") torpedoes. Kyrgyzstan itself is not needed because of its lack of a navy. Throughout the post-Soviet period, Bishkek has been bargaining with Moscow on what conditions to transfer the plant to the ownership of the Russian Federation. At the same time, most of its products are exported to India.

On the territory of the country is 999-I Air Force Base of the Russian Federation. These are roughly 10 combat aircraft and up to 15 helicopters.

As can be seen, the military potential of Kyrgyzstan is modest. The level of combat and moral and psychological training of personnel, to put it mildly, is low.

With the Pamir by thread

In Tajikistan, the situation is much worse.

With the exception of the Baltic republics, which refused to consider themselves successors of the USSR, Tajikistan became the only former Allied republic that did not receive any share of the Soviet army after the collapse of the country. National Armed Forces were created in the post-Soviet period with the help of Russia. At the same time, the Tajik army initially became a synthesis of government troops and opposition forces during the civil war of the first half of the 90's. Although 20 years have passed since then, the complete integration of these formations did not happen, as demonstrated by the events of the second half of 2015. Nevertheless, formally, the country's Armed Forces are considered to be one. All of their military equipment of Soviet production, transferred by Russia. There is no own defense industry in Tajikistan. In the past two years, began the flow of technology from China. 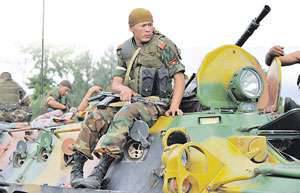 The ground forces of Tajikistan include six brigades: 1 and 3 th motorized rifle, 11 th mountain rifle, 7 th air assault, 1 th MTR (Presidential Guard), 12 th artillery. All heavy military equipment is in the 1 Brigade of the SSO, which simultaneously performs the function of the MVD. 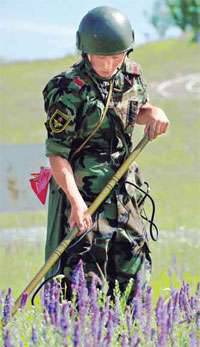 As is the case with another CSTO member - Armenia (“Outpost with questions”), the Russian military bases are of utmost importance for the security of Kyrgyzstan and Tajikistan. True, there are significant differences in the behavior of the authorities of these countries.

Armenia and NKR have very powerful and combat-ready armies, but Yerevan does not require Moscow to pay for staying the 102 base on its territory. On the contrary, he himself largely finances it. And even more so does not impose any other conditions in connection with the functioning of the base.

In Kyrgyzstan, not to mention Tajikistan, things are much worse with armies. However, they regularly crave payments for the maintenance of Russian military bases in their territories and put forward various other demands (for example, on the status of their citizens working in the Russian Federation).

The most amazing thing is that Moscow is being blackmailed and begins to discuss the Kyrgyz and Tajik demands seriously. Although the answer to them should be only one: a statement of immediate withdrawal. For military and geographical reasons, it would be much easier for Russia to defend only Kazakhstan from the expansion of the Islamists from the south, especially since the latter itself possesses highly capable armed forces. For Kyrgyzstan and Tajikistan, the withdrawal of Russian troops will be a disaster. If the leaders of these countries are not aware of such simple things - this is their problem, not ours. Strangely, this does not seem to be understood in Moscow either.

Ctrl Enter
Noticed oshЫbku Highlight text and press. Ctrl + Enter
We are
Prospects, subtleties and difficulties of the formation of the SCO PRO, or when the observers are closer to the participantsCSTO summit in Sochi: around Syria, claims of Sargsyan and the southern borders
Military Reviewin Yandex News
Military Reviewin Google News
61 comment
Information
Dear reader, to leave comments on the publication, you must sign in.