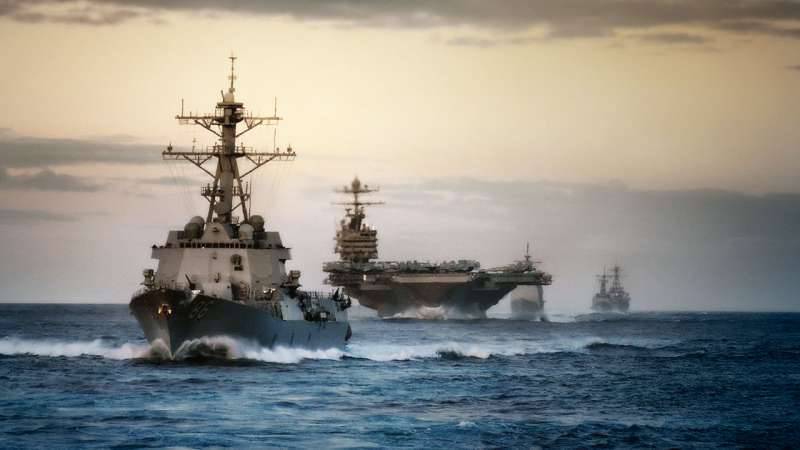 This publication is the first (not counting the “premature” for the Russian Navy and the PLA Navy) of the conceived project of comparing the world’s navies to determine the real place of the Russian Federation in the 10 of leading maritime powers - a comparison without the emotional, in figures, divided into two stages. At the first stage, it is supposed to compare the quantitative, “weight and size”, and age characteristics, as well as the capabilities of military shipbuilding, respectively, in terms of total number, total and average total displacement (because the standard and normal values ​​are quite rare), average service life 01.01.2016 and average construction time). It’s too early to talk about the second stage. 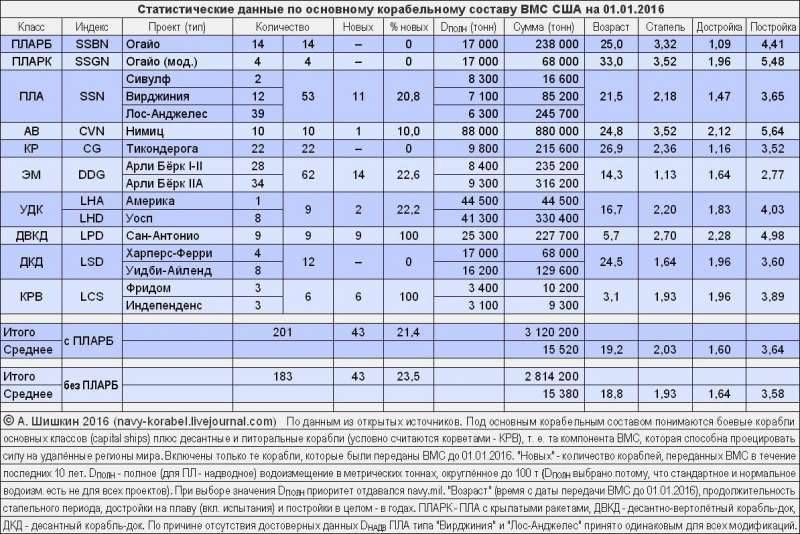 The presented statistical study takes into account everything that is called capital ships - warships of the main classes, plus amphibious and so-called littoral ships (which the author is inclined to consider as corvettes), i.e., that component of the Navy that can project power to remote regions of the world. At the same time, the US Navy is probably the only military fleet on a planet in which almost all the ship’s composition falls under this definition, with the possible exception of minesweepers such as the Avenger.

Ships under construction (not transferred to the fleet before 01.01.2016) are included in the source data. reference - they are not taken into account neither in the total number of the ship personnel, nor in the total displacement. Ship names are given in Russian transcription, in most cases checked for compliance with the traditional spellings of geographical names, names and surnames of people in whose honor the nomination was made.

1) colossal total displacement (about three million tons) - in four times greater than that of the closest competitors (the Russian Navy and the PLA Navy - 1 link);

3) large average displacement (15 500 t) corresponding to heavy cruiser (in the Russian Navy - the destroyer, in the PLA Navy - in a frigate), which makes it possible to speak of the US Navy as the “fleet of large ships”;

4) a fairly modest share of new ships (which entered service during the last 10 years) - 21,5-23,5% (for the Russian Navy - about 10-12,5% — 2 link), which, most likely, is close to the "standard" of the share of new equipment (with the exception of some types of weapons) in any fleet that is steadily developing and functioning for a long time;

5) is not too strong (not "forever") separation from the Russian Navy by the average age of the ship (19 против 25 years), which testifies to both the difficulties of its more frequent renovation and the well-developed ship repair, capable of maintaining a large number of far from new ships in proper technical condition;

6) minimum gap (in fact - parity) with the Russian Navy on the average age of multi-purpose submarines, including the SSGN / APCR (22,3 против 22,9 year - in the tables in the explicit form of these numbers are not), with "only" two-fold (2,2) superiority in numbers (57 против 26) - provided that our program of restoring the nuclear submarine fleet will be fully implemented;

7) significant (almost double) separation from the Russian Navy by the average age of the destroyer class ships (including BOD) - the workhorse of the ocean fleet (14,3 против 26,2 years) with an overwhelming (almost sixfold) numerical superiority (62 против 11);

8) the challenging dates for the construction of "undersized" littoral ships (besides - increasing from the head to the serial, and not vice versa), exceeding those for cruisers, destroyers and submarines;

9) envy and respect for the average construction time of multi-purpose submarines and destroyers (3,65 и 2,77 year, respectively) - a landmark to strive for;

10) the USSR’s lagging behind the United States in the average duration of the construction of warships of the main classes (including SSBNs / SSBNs) was only three months with a quarter (3,91 против 3,64 years or 6,9%) - potential that needs to be restored at least in the medium term.