Unspeakable details of the Lancers strategy at the Australian Tyndal airbase: China’s containment is only a small part

In the photo, the next on the runway canvas is the strategic bomber B-1B “Lancer” and the strategic air tanker KC-10A “Extender”. These types of strategic aviation they may soon be flown to Australian air bases with the goal of "containing the Chinese threat." But to carry out combat duty in the air near the Chinese coast, the B-1B does not at all need additional refueling from the Extender, since the distance to the South China Sea from the Tindal airbase is 4000 km and the range of the Lancer is 5500 km. Consequently, the list of likely targets for B-1B is far from being limited to China alone.

Dozens of analytical publications on many years of territorial disputes over the Spratly and Diaoyutai island archipelagoes, whose strategic importance is gaining momentum for China and the US literally every month, can not even draw attention to the fact that among the top ten plans of the US Air Force there was a rather interesting point about the forthcoming redeployment of US strategic bomber-rocket carriers B-1B "Lancer" to the air base in the Northern Territory in Australia. The information on this topic on the network is quite scarce, as well as the statements made in early March by Lieutenant Colonel of the US Air Force Damien Pikart and published on theaviationist.com website.

With the accusatory rhetoric of the American power and foreign affairs agencies already accustomed to everyone, D. Pikart caught the Celestial Empire in expansion in the Indo-Asian-Pacific region, and also focused attention on the need to take retaliatory measures, which, in fact, is the transfer of "strategies" B-1B to the Australian continent. The American lieutenant colonel also noted the significant operational and strategic advantages of delivering global attacks in this region after the appearance of the Lancers. Information, as you can see, is absolutely standard, typical for the American central media, and does not carry any information about the details and consequences of the use of these aircraft in the south-east IT from the Eurasian continent. The fact that for all sorts of tactical maneuvers to contain the PLA in the APR, the Americans have simply impressive arsenals of various types of rocket armament pushes towards reflections. Naval and air bases in Okinawa, Guam, the Philippines, an entire military city in South Korean Pyeongtaek, covered by several Aegis-destroyers (armed with tens-hundreds of Tomahawks) and dozens of Patriot PAC-2 anti-aircraft missiles / 3 ”, hundreds of tactical fighter aviation units with all types of high-precision missile weapons (JASSM-ER, SLAM-ER, etc.), RQ-4“ Global Hawk ”strategic reconnaissance unmanned aerial vehicle squadron. All the Chinese coast is in the radius of action of this weapon. Then the question arises: why is there also a strategic attack aircraft, and with a full-fledged wing of the tanker aircraft?

To answer it, you need to remember that strategic aviation is a delicate matter, and when it comes to any redeployment or new concepts of its application, global changes are the reason for this, and every tiny Spratly and Senkaku immediately appear in the background the role of minor issues. It is worth looking at the development of the armed forces of Australia itself, which takes place on the American-Japanese technological base, as well as on the geographical location of this continent.

Due to the lack of information on the number of B-1Bs planned for redeployment, we will proceed from the exact location of the transferred machines. Based on open sources, it can be determined that they will be deployed at the RAAF Tyndal air base (northern part of the state of Northern Territory, 260 km from the Timor Sea). The northern part of the continent was not chosen by chance: after all, this is 2000 km closer to Eurasia than Amberley and Edinburgh airbases, which adds another 1% to the radius of action of B-30B. The Avb Tyndal’s relative proximity to Australia’s northern coast, while being in the deep enough of the continent to cover an object with a layered aerospace defense made of Patriot PAC-3 and THAADs, also plays into the hands of the US Air Force. Onshore military facilities are less insured against massive missile strikes by SLCMs from enemy multi-purpose nuclear submarines. The proximity to the Pacific and Indian oceans will allow the Lancers to be quickly involved in the possible performance of anti-ship operations (B-1B are carriers of the low-profile AGM-158C LRASM anti-ship missiles).

But it is more alarming that a year earlier, all 63 of the B-1B missile carrier were transferred from the staff command of the US Air Force to the 8 Army of the Global Shock Command, which belongs to nuclear forces. “Lancers” are again in the nuclear triad, and both conventional ALCM / JASSM-ER / LRASM and strategic AGM-86B / C can be used (the latter will require installation of specialized suspension points, which were dismantled in 1996 year, when, in the eyes of the West, Yeltsin Russia was not a threatening geopolitical enclave in Eurasia). The penetration of these missile carriers into the so-called “nuclear test”, based on the Tyndal base, dramatically changes the geostrategic situation not only in the Indo-Asia-Pacific region, but also in Central and Western Asia. And this already speaks of the threat to the southern borders of the CSTO. The intricacies of using this region as an air bridgehead for planning a possible strategic aerospace offensive operation by the US Air Force are a whole lot. Each of the 63 B-1B is capable of carrying strategic ALCM AGM-20B ALCM strategic armaments in the internal armaments compartments and external 86 hangers, and all Lancers can take 1260 missiles, which exceeds the official number of ALCMs in the US Air Force.

The AGM-86B range is 2780 km, which, when launched over Pakistan, allows them to reach military sites in any of the southern countries of the CSTO (Kazakhstan, Tajikistan, Kyrgyzstan), as well as strategically important cities like Novosibirsk. The importance of this city for the military industrial complex of the country can be judged by only one “branch” of the production of high-precision Su-34 front-line fighter-bombers and participation in the PAK FA program of NAPO them. V.P. Chkalov. And to the territory of Pakistan and other Asian countries, the Lancers will be safely helped by entire squadrons of the strategic KC-10 “Extender” air tankers, some of which can be used from bases in Australia itself, and some from Arabian air bases. The threat also appears for strategic sites in the Caspian Sea and on the Black Sea coast.

The Tyndal B-1B covers the whole territory of the Middle Kingdom and the Far East, where the actions of the American air tankers are absolutely not constrained by anyone, under the cover of dozens of island objects of the Air Force and Navy of the USA, as fish in the water. A clear and cunning “party” of the United States with the B-1B shipment to the Australian Tyndal airbase, played out today, provides for many years of deployment followed by the transformation of Australia into the largest stronghold of American interests in the southern hemisphere. It is not by chance that the Royal Australian Navy abruptly went into quantitative and technological growth (purchases of Poseidon patrols, agreements with Japan on unique Soryu SPSTs), and the Air Force acquired a logistics base to service the F-35A in the APR. 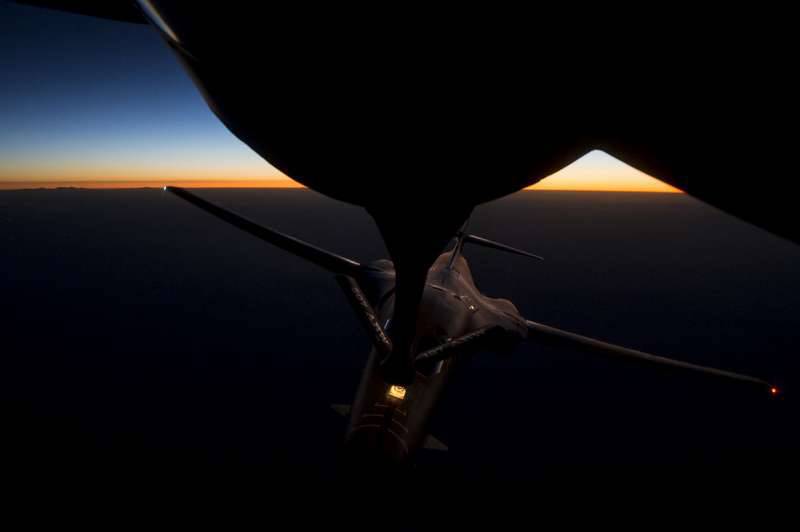 The militarization of the Australian continent is not at all surprising. Washington has long understood that the efforts undertaken by Russia to control the Arctic region are several times more effective than the demonstrative flights of the air defense aircraft “NORAD” or occasional ascent of the submarines of the classes “Sea Wolf” and “Los Angeles”. The Russian Space Forces and the Russian Navy create here a powerful military infrastructure with several air defense / missile defense lines based on C-400 and MiG-31BM interceptors in Tiksi, Avb with anti-submarine aircraft and other equipment for reconnaissance and destruction of naval targets. The Americans in Alaska and Greenland, in terms of distance from the continental logistics facilities with equipment and provisions, have more scarce opportunities than our bases on Franz Josef Land, Novaya Zemlya and other islands. All operational missile-prone areas located in the Arctic are known to us.

When planning an aviation "strategy" through Australia and Central Asia, everything is much more complicated, since most of the states here have an unstable military-political situation related both to religious differences and to various territorial disputes and actions of terrorist organizations "fed up" by the States themselves. You can expect a “stab in the back” from any side, and having gotten your strategic link to this vague geopolitical “mess”, the Americans very skillfully create a new “puzzle” for Russia and its allies, requiring the use of additional military technical tools in the “cold” war.