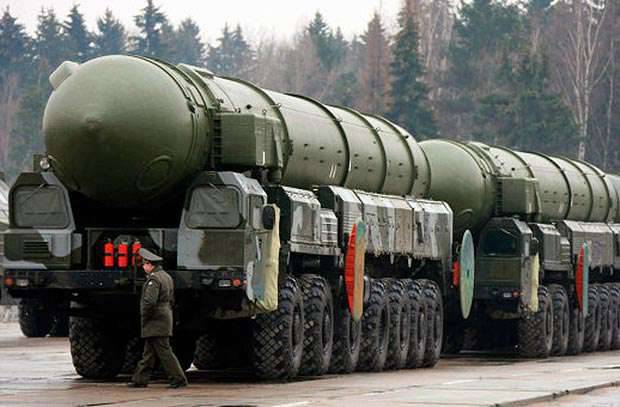 A missile system with a unique Topol-type intercontinental ballistic missile will be a Russian missile shield up to 2021.
The delicate balance between war and peace in our time is supported by the parity of US and Russian strategic nuclear weapons. These are ammunition of various capacities that can be delivered to the target by air, sea and land carriers. The last of them are stationary (mine) and mobile intercontinental ballistic missiles (ICBMs). In the USA, these are the only Trident-type ICBMs that have been in service with the 1970 year. The main and most popular Russian ICBM are Topol missiles.

The combat readiness of these missiles is maintained by upgrading them with subsequent test launches without combat equipment. In addition, such launches demonstrate the readiness of nuclear arsenals and the determination of their owners to apply such weapon if necessary. This was the goal pursued by the United States during two (16 and 26 February) this year test launches of the Minuteman-3 ICBM. Shortly before the last US Deputy Secretary of Defense, Robert Work said that "this is a signal that we are ready to use nuclear weapons to protect our country, if necessary."

According to the open press, the Russian arsenal of ground-based ICBMs today includes several types of missile systems with launch vehicles. These include the P-36М2 "Voevoda" (SS-18 Satan, "Satan"), UR-100N UTTH (SS-19 Stiletto, "Stiletto"), PT-2PM "Topol" (SS-25 Sickle, "Serp" ) and РТ-2ПМ2 "Topol-M" (SS-27 Sickle B), as well as the PC-24 complex "Yars" created on the basis of the latter. What is the complex "Topol-M", which at the end of the last century was the "talk of the town"?

The Topol-M mobile strategic ground-based missile system (PGRK SN) became a further development of the PGRK RT-2PM Topol, which was put into service in the 1988 year. The new complex became the most massive in serial production and provided a solution to the problem of the survivability of a group of nuclear weapons for retaliation "retaliation".

The main advantages of the complex are high mobility and a degree of camouflage, the possibility of launching rockets from pre-prepared areas on patrol routes. Combined with higher accuracy in comparison with the predecessors Temp-2С and Pioneer, Topol could be used to solve the whole range of strategic tasks.

The upgraded Topol-M missile system (RT-2PM2) was a further development of its counterpart and the first complex of domestic production only. Initially it was planned to create a stationary (mine) and mobile complexes with unified XMON 15Ж65 and 15Ж55, respectively. In the original version, these missiles were supposed to have liquid and solid propellant engines. In addition, the starting container of the MBR mine was a metal, mobile - fiberglass.

After refusing to take part in this development of the Ukrainian design bureau Yuzhnoye in 1992, the lead developer of MIT for the warheads of both missiles created a single solid-fuel propulsion system. This type of missile was the first ICBM created in Russia after the collapse of the USSR.

Complexes of the Topol type were serially produced by Votkinsk Plant OJSC and Titan Central Design Bureau in the period from 1997 to 1999.

The mobile and mine versions of the rocket were put into service in 1997 and 2000, respectively, and in 2006, the mobile version of the Topol-M complex was recommended for adoption. In 2011, the Ministry of Defense stopped the procurement of the complex in connection with the deployment of the RS-24 “Yars” ICBM with missile warheads of individual guidance (MRU). The rocket has become an improved version of the Topol-class ICBMs.

The missile system with Topol-M ICBMs is designed to hit enemy strategic targets at a distance within 11000 kilometers. The first launch took place 20 December 1994. A three-stage solid-fuel MBR with 47,1 launching mass (47,2) can hit a target with a 1,2 t monoblock nuclear warhead (power 550 qt) with a circular probable deviation of no more than 200 m. accordingly, with a power reserve of up to 16 km, it can move with a maximum range of up to 16 km / h. 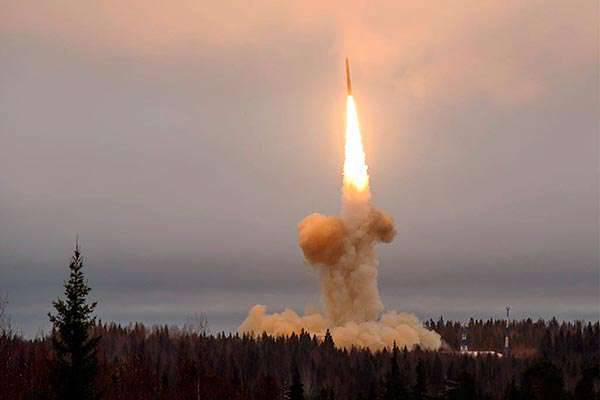 Training and combat launch of the Topol-M missile system from the Plesetsk cosmodrome. Photo: topwar.ru
The energy capabilities of the rocket can increase the drop weight, significantly reduce the height of the active part of the trajectory, increase the efficiency of overcoming promising means of missile defense. The third stage with direct-flow hypersonic atmospheric engines was tested.

A monoblock high-speed warhead can be replaced with a maneuvering or split head (FPG, unified with the Bulava ICBM) with 3-6 th personal-targeting combat units (IN) with 150 kt each. In 2005, a Topol-M missile with a maneuvering head was tested, and in 2007, a Topol-M ICBM with a multiple-engined rocket system was tested. The probability of overcoming the American missile defense system today is 60-65%, and in the future - more than 80%. The warranty period for the XBUMXЖ15 MBR mine is 65-15 years.

The missile system with Topol-M ICBM has a number of features. These are high mobility (PGRK) and security of mine options. The speed of a rocket with a mortar launch in 3-4 is more than in comparison with liquid ICBMs, and the limited maneuver provides a quick climb and exit from the dangerous interception area after launch. False targets, high flight speed and the ability to change the flight path provide a high probability of overcoming the enemy's missile defense system. This is also facilitated by an improved guidance system, a composite case made of ultrastrong polymer and the absence of lattice aerodynamic stabilizers, which significantly reduces the likelihood of detection of ICBMs by modern radars.

High-passable PU can turn on any soil due to incomplete hanging and low specific pressure on the soil, which is lower than that of a truck.

At the expense of these and other measures, the missile system with Topol-M ICBMs on combat readiness, maneuverability and effectiveness of hitting targets in the conditions of countering the enemy’s missile defense system is about 1,5 times the previous generation.

According to the latest data from open sources, as of the end of 2015, Russia had about 100 PGRK with Topol ICBMs, as well as about 50 and 20 of Topol-M ICBM of mine and mobile basing. According to the statement of the Strategic Missile Forces commander Sergey Karakaev, the Topol-M type missile system with ICBMs will be in service until the 2021 year. This possibility provides a high operational reliability of the complex, which was confirmed by repeated test launches.

For comparison, as of the 2013 year, the United States Air Force numbered around 450 ICBMs LGM-30G Minuteman-3, on which 550 nuclear warheads are installed. According to 150, such ICBMs in 2007 were on alert at Malmstrom (Montana) air bases, Francis Warren (Wyoming) and Minot (North Dakota). They are regularly upgraded by replacing warheads, guidance and control systems, power plants. It is assumed that this rocket will remain in service with the US Air Force until the 2020 year.

Ctrl Enter
Noticed oshЫbku Highlight text and press. Ctrl + Enter
We are
Missile attack on Europe: myth or reality?Transportation and loading into the mine of an intercontinental ballistic missile of the 5 generation rocket complex RT-2PM2 Topol-M
Military Reviewin Yandex News
Military Reviewin Google News
25 comments
Information
Dear reader, to leave comments on the publication, you must sign in.