March 9 2016
42
Estonia decided to demonstrate to the world that in NATO it is an “important partner.” Recently, Estonian Defense Minister Hannes Hanso announced that the country has a “defense industry.” The statement that the Estonian manufacturers create "military equipment" was made during the international exhibition UMEX-2016 in Abu Dhabi, held from 6 to 8 in March.


In the United Arab Emirates, Estonia presented several developments that, according to Hannes Hanso, should have attracted the attention of both potential buyers and partners in the North Atlantic Alliance. These are robotic tracked “sleighs” created by Milrem, alarm systems for unauthorized border crossings, as well as unmanned aerial vehicles.

During the exhibition, the Estonian Minister of Defense made a statement in which he called Estonia “a well-known and recognized country that gives birth to innovative technologies”. According to Hannes Hanso, there are several companies in the country that "are a model of the development of the defense industry." Abu Dhabi must have been quite surprised that Estonia is somehow connected with the presence of the defense industry, and even more so with the words that some Estonian companies are "a model of development."

In order to have an effect on visitors to the UAE, the Baltic delegation presented the above mentioned “robosani” (THeMIS), which, as stated in the press release, are capable of “adapting to any military or rescue mission”. Generally any? .. 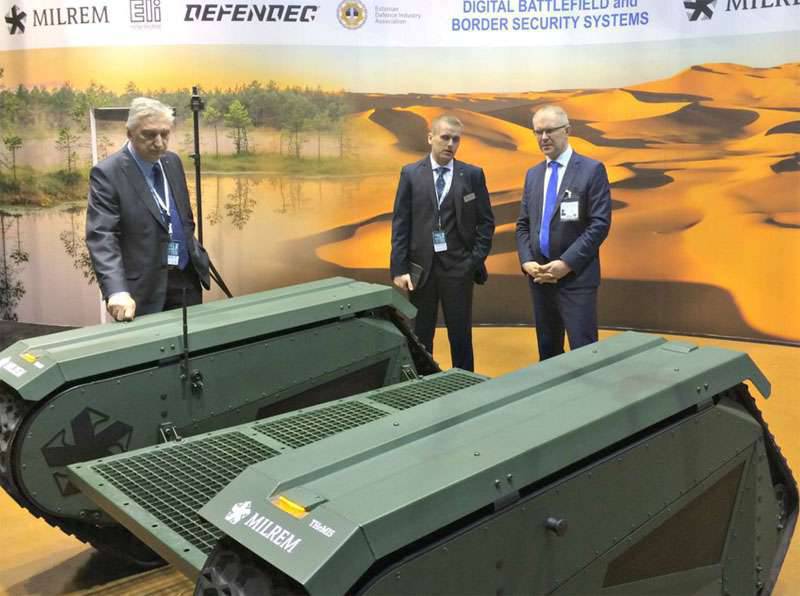 From the message of the company:
The platform allows the installation of various combat modules, as well as communication modules. THeMIS can be used for evacuation of victims, for demining areas, supply units weapons and ammunition, a base for extinguishing fires.

The main weapon in question is a machine gun remotely controlled by an operator with an aiming system through a monitor to which a signal from the camera is transmitted.

How much such a system is noise-resistant, and whether it will turn out that “robo-sledge” during a real battle will turn into a robotic “blind man” is a separate question for the developers.

The developer, meanwhile, states that the platform THeMIS It is still being tested, and in 2017, it can be used by the Estonian army and rescue services.

Another copy of the Estonian stand in Abu Dhabi is the ELIX-XL multi-rotor drone. The developer emphasizes that this drone is capable of shooting (day and night) and at air temperatures below zero. A small UAV can monitor the terrain at wind speeds up to 8 m / s. Drone weight about 5,5 kg. The ELIX-XL is equipped with 10 video cameras. The drone is able to monitor moving objects at a constant speed. Flight speed - 12 m / s, autonomous flight time - up to 40 minutes, range from the system for receiving information and flight control - no more than 7 km.

From the presentation of the company Eli Military Simulations:

Estonian company Defendec introduced a border control system developed a few years ago in Abu Dhabi. This system allows to carry out visual day and night monitoring of the state of affairs in one or another part of the border from the border center (the outpost version). According to the company, the system will allow to distinguish cases of crossing the border - for example, people and animals. In particular, if an elk or deer crosses the border, the operator is said to be able to track its “parameters” and not lift Estonian border guards “into a gun”. If you believe the chart presentation video Defendec, shot in 2013 year, the system “shines through” almost the internal “composition” of the offender. It seems to indicate that the “aggressor”, which is going to invade independent Estonia “incognito” (for example, in reindeer skin ...), will be immediately detected, of course, neutralized by Estonian border guards.

In total, the UMEX exhibition, which focuses on unmanned systems, was attended by 119 companies, presenting over 5 to thousands of different military, civil and dual-use items. The largest number of developments represented by companies in Europe and North America. It is surprising that the newest offspring of the Estonian defense-industrial thought did not take part in the recent Tallinn parade in honor of the anniversary of the founding of the Estonian state.

Ctrl Enter
Noticed oshЫbku Highlight text and press. Ctrl + Enter
We are
ARMY-2016. Tracked transporters. "We are not afraid of dirt too!"The action “Military service under the contract is your choice!” In Rostov-on-Don: future contract servicemen, exhibitions and “Russian Knights”
Military Reviewin Yandex News
Military Reviewin Google News
42 comments
Information
Dear reader, to leave comments on the publication, you must sign in.