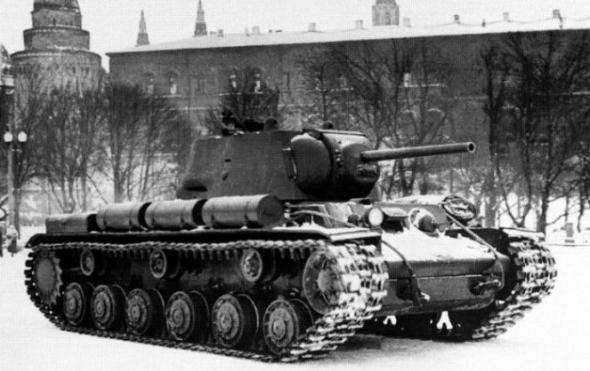 Thanks to the creation tanks KV, the Soviet Union became the only state to have in 1941 in large quantities heavy tanks with anti-shell armor. The Germans called HF a monster.

The main disadvantage of the majority of tanks of the second half of the 30-s was weak armor, penetrated by fire anti-tank guns and heavy machine guns.

The first KVs passed military tests during the Soviet-Finnish war, which was the first conflict where heavy tanks with anti-bullet armor were used. Then, at the front, Soviet heavy tanks KV and multi-turret QMS and T-100, which operated as part of the 20 tank tank brigade, were tested.

If in tank battles, which were rare in the Finnish war, the newest machines did not take part, they turned out to be indispensable for breaking through enemy fortifications. KV-1 withstand hitting virtually any anti-tank projectile guns. At the same time, the 76-mm gun was not powerful enough to fight the enemy’s pillboxes. Therefore, already during the war, on the basis of the KV-1, the development of a tank with an enlarged turret and an installed 152 mm began. howitzer (future KV-2). At the same time, according to the experience of the Soviet-Finnish war, it was decided to abandon the creation of heavy multi-turreted tanks, which turned out to be expensive and difficult to manage. The choice was finally made in favor of HF.

There is a known case in June 1941 of the year in the Rassenaya area, when one KV-1 bound the actions of the German division for almost two days. This KV was part of the 2-oh tank division, which brought German troops a lot of trouble in the early days of the war. Apparently spent fuel, the tank took up a position on the road near the marshy meadow. In one of the German documents noted:

“There was practically no means to cope with the monster. Tank can not be circumvented around the swampy area. It is impossible to bring ammunition, the seriously wounded died, they could not be taken out. Attempting to eliminate a tank with an 50-mm anti-tank battery from a distance of 500 meters resulted in heavy losses in calculations and guns. The tank had no damage, despite the fact that, as it turned out, 14 received direct hits. From them there are only dents on the armor. When the 88-mm gun was brought up to the distance of 700 meters, the tank quietly waited until it was placed on the position, and destroyed it. Attempts by sappers to undermine the tank were unsuccessful. The charges were inadequate for huge caterpillars. Finally he fell prey to cunning. German tanks 50 simulated an attack from all sides to divert attention. Under cover, she was able to push and camouflage the 88-mm cannon from the rear of the tank. From 12 direct hits, 3 requested armor and destroyed the tank. " 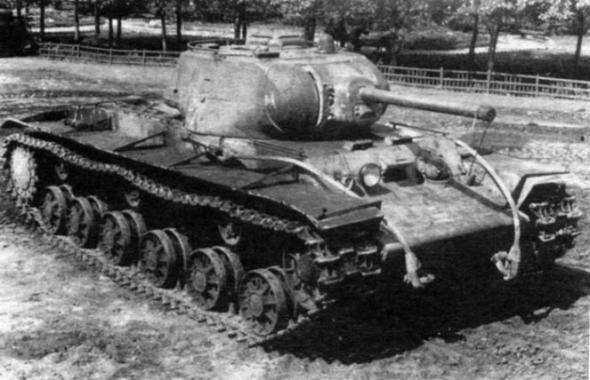 In the 1942, the production of the upgraded version - KV-1 (high-speed), adopted on 20 August 1942, was started. The mass of the tank decreased from 47 to 42,5 t by reducing the thickness of the hull armor plates and the size of the tower. Tower - cast, acquired a slightly different appearance and was equipped with a commander's turret. Armament remained similar to the KV-1. As a result, the speed and maneuverability increased, but the armor protection of the tank decreased. The installation of a more powerful 1-mm gun (similar to the prototype preserved in Kubinka) was intended for the KV-85, but this tank did not go into series. Subsequently, on the base of the KV-1s with the 85 mm gun, the KV-85 was created, which however did not become massive due to the switch of production to the IS tanks. The soldiers called the tank "kvasok."

In tank battles, at least until the middle of 1942, German troops could hardly counterpose the KV-1. However, in the course of the fighting, the tank’s drawbacks also became apparent - relatively low speed and maneuverability compared to the T-34. Both tanks were armed with 76-mm guns. True, KV had a more massive in comparison with the "thirty-four" armor. Suffered from HF and frequent breakdowns. When moving, the tank broke almost any road, and not every bridge could withstand the 47-ton tank. The heavy tank "Tigr" appeared among the Germans at the end of 1942, surpassing any heavy tank at that time of the war. And the KV-1 was virtually powerless against the Tiger, armed with a long-barreled 88-mm cannon. The Tiger could hit the KB at great distances, and a direct hit with an 88-mm projectile would disable any tank of that time. So, February 12 1943 of the year near Leningrad three “Tigers” hit 10 KB without damage from their side.

From the middle of 1943, the KV-1 is less and less common on the fronts of the Great Patriotic War - mainly near Leningrad. However, the KV-1 served as the basis for the creation of a number of Soviet tanks and self-propelled guns. So, on the basis of the KV was created SU-152, armed with 152 howitzer gun. To this day, only a few KV-1 units have survived in Russia, which have become museum pieces.

Ctrl Enter
Noticed oshЫbku Highlight text and press. Ctrl + Enter
We are
Multi-tower tanks of the USSR. Part of 5. QMSIron fist of the Red Army. Motorized and tank divisions
193 comments
Information
Dear reader, to leave comments on the publication, you must to register.