February 20 2016
40
In December 2014, the Ministry of Defense purchased 76 sets of new Amphora special diving equipment (SHS) with a closed breathing system. The state spent 123,1 million rubles or 1,6 million rubles for each set to purchase these sets. This equipment entered service with submarine special forces. In particular, it was received by the fighters of the detachment of anti-submarine sabotage forces and assets (PDSS) of the Caspian flotilla.


A set of SVS provides combat swimmers with a covert movement under water and contributes to the implementation of various diving activities aimed at protecting naval facilities, various hydraulic structures, covertly carrying out underwater engineering work, including an anti-sabotage character. The total weight of the entire kit is 50 kg. Its highlight is the isolating breathing apparatus "Amphora". Due to the presence of this equipment, the swimmer under the water during expiration does not release air bubbles, and therefore can move secretly. In addition, the kit includes a bulletproof vest. 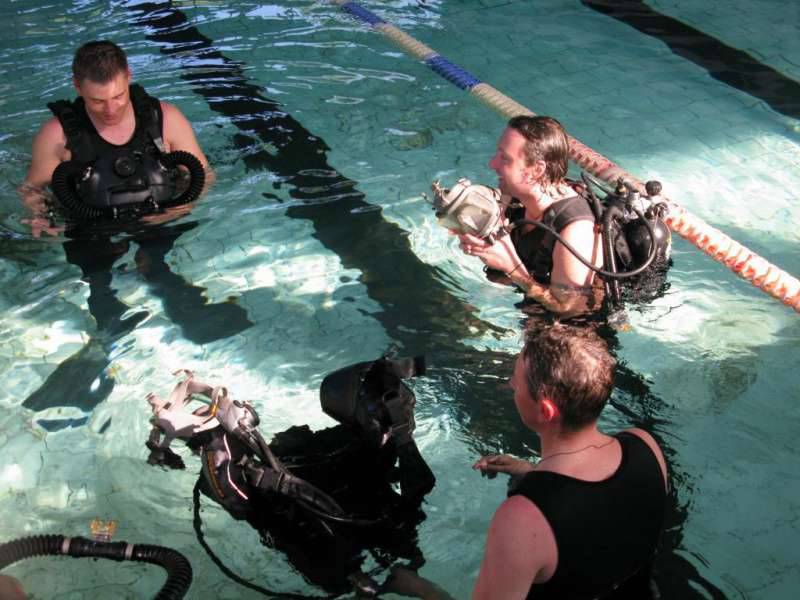 Equipment units of underwater saboteurs reliable, effective, and most importantly modern equipment is a priority, as the fighters of such units are designed to solve the tasks of extreme importance. Successful activity of underwater saboteurs can help ensure superiority at sea not as a result of fleets and artillery duels with unpredictable results, but at the expense of two or three successful sabotage at ports, on dams, bridges, power plants or other strategic enemy targets. Moreover, underwater swimmers often have to act in three environments at once - in the water, on land, and even in the air, landing from the helicopter or plane.

The Amphora kit should include a closed breathing system that prevents the release of gas bubbles when breathing underwater, a black wetsuit that allows the swimmer to work at depths up to 40 meters at temperatures from zero to + 36 degrees Celsius, compass, knife, flippers, lantern and special underwater acoustic communication system. In addition, the body armor can also be included in the Amphora kit. The total weight of the equipment kit is approximately 50 kilograms, including the 22-kilogram isolating breathing apparatus. The body armor "Korsar-B", which is part of the diving equipment, corresponds to the fourth class of protection, reports RIA News. He can protect a combat swimmer from a shot from an APS underwater submachine gun or a SPP-1 pistol, as well as from an ordinary Kalashnikov assault rifle. The supply of respiratory systems "Amfora" is engaged in the company "Tethys Pro" from St. Petersburg.

It is worth noting that, until recently, breathing apparatus was still actively used, in which the carbon dioxide released during the swimmer’s breathing was absorbed by a special chemical composition, then in the breathing bag it was enriched with oxygen and inhaled. Such devices had a number of drawbacks: the difficulty of checking before making a dive with the help of special equipment, as well as the use of the dangerous substance “ozone” as a source of oxygen. In this regard, there was a need to develop a set of SVS, which would combine all the previous achievements of science and technology in diving, as well as completely new solutions to significantly improve the technical and operational characteristics of the apparatus, simplifying their maintenance and use of combat swimmers and divers. 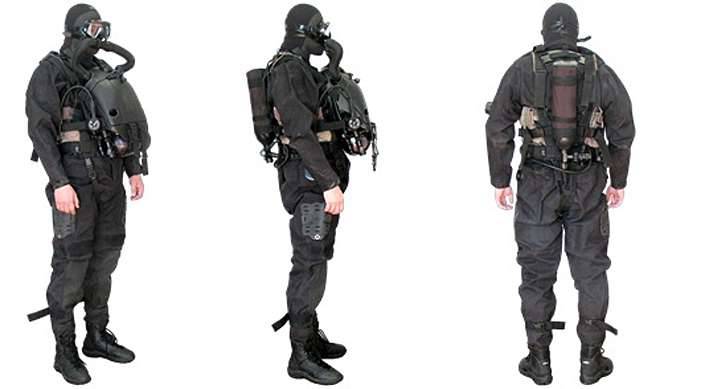 In 2009, Tetis Pro specialists, on their own initiative, created a prototype of a set of special diving equipment, complete with an apparatus of closed / semi-closed breathing cycles called “Amphora”. This kit is designed for covert movement of underwater swimmers at depths up to 40 meters, including in cold water. The Amphora SVS kit includes in its structure only modern developments in the field of conducting “underwater war” of both Russian and foreign manufacture. It was intended to replace the physically and morally outdated equipment with the IDA-71U closed-cycle apparatus, which until now was used in the Russian navy. The assigned lifetime of the Amphora SVS is 7 years, of which 5 is years of operation and 2 is stored. The assigned system resource is 500 hours.

The Amphora isolating breathing apparatus operates according to the principle of supplying a swimmer with compressed oxygen or an oxygen-nitrogen mixture (CAM), which respectively circulate through the closed / semi-closed absorption cycle of the apparatus-lungs system. The presence of the gas mixture switch allows the combat swimmer to switch Amphora from a closed-circuit breathing (100% oxygen) to a half-closed breathing circuit (to 40% UAN) depending on the depth of immersion, and the operating mode can be switched on the surface as well and under water. In this case, the switch was equipped with a safety valve to eliminate the possibility of unauthorized switching. The existing valve for adjusting the oxygen supply, which is located on the second stage regulator, allows the swimmer to change the flow depending on the level of physical activity in the range from free flow to maximum resistance, without shutting off the oxygen supply completely. The device itself is compact enough, the color is black. It is located on the chest of a diver or a combat swimmer with the help of a special suspension system.

A cylinder filled with an oxygen-nitrogen mixture has 3 attachment options: on the front of the device, on the back or on the leg of a combat swimmer. "Amphora" is a fully mechanical apparatus, which has a rigid body that protects its main components from various damage. The device does not require special tools for maintenance and is designed for intensive use. When the apparatus is functioning according to a semi-closed breathing pattern, the respiratory gas mixture (DHS) is supplied continuously using a calibrated nozzle. In this case, the excess gas mixture using a pickling valve, which is located in the upper part of the apparatus, is easily removed from the breathing circuit. 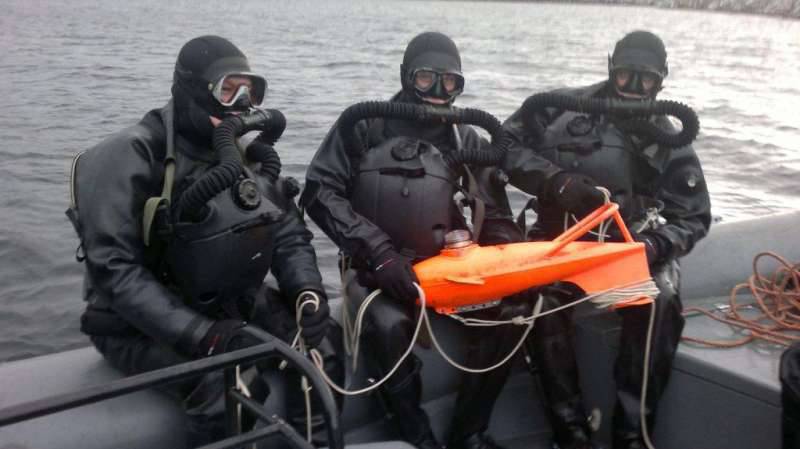 The first stage of state testing of the Amphora SVS was carried out at the experimental research base of the 40-th Research Institute of the Ministry of Defense of the Russian Federation in February-March of the 2009. At this stage, combat swimmers and divers were trained in a new type of equipment for them, offsets were taken and access to independent operation and maintenance of equipment was carried out. Then, testing and testing of all equipment sets in the 15-meter tower of the training complex, 25-meter training pool and in the pressure chamber with increasing pressure to a depth of 40 meters were carried out. Working out the set of equipment "Amphora" was held in the normal mode. In addition, at the first stage of testing, we tested a suspension system with a positive-buoyancy body armor, hydroacoustic coupling and a means of underwater movement of a swimmer under water. Participants of the state tests made a number of recommendations: on a diving knife, on a suspension system, on the place of valve installation on a diving suit, etc. The comments received by the developers were eliminated during the preparation for the second phase of testing.

The second stage of state testing took place in the cold waters of the Barents Sea in October-November 2009. The descents of divers were carried out at depths up to 40 meters in conditions that were as close as possible to the combat. During the second stage of the test, the weather did not contribute to the comfortable work of the divers: the water temperature dropped to 0 ° C to form ice and air to –10 ° C, while visibility under water did not exceed 15 meters. Despite the weather conditions, test divers and commission members all worked out all the points of the state test program. The findings of the state commission on the results of the test set of equipment confirmed its operational and tactical and technical characteristics. According to the results of state tests of the Amphora SVS kit conducted in 2009, it was decided to accept this equipment for trial operation. 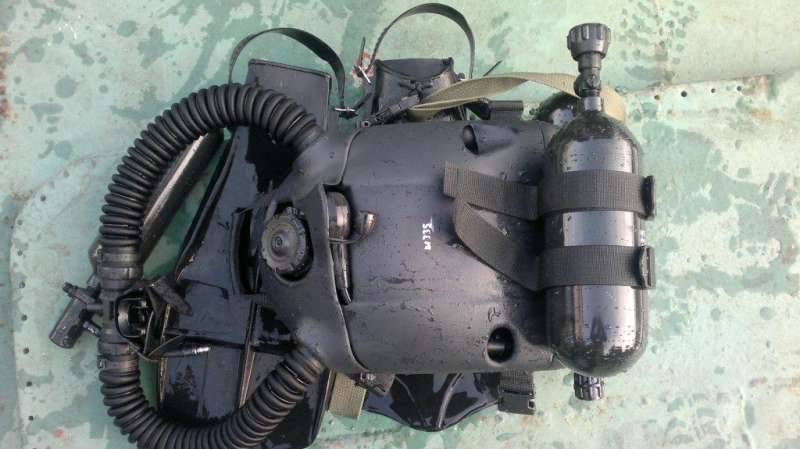 Amphora’s special diving equipment provides a combat swimmer:
- livelihoods in solving special problems, including in emergency mode;
- secretive underwater movement at depths up to 40 meters;
- breathing from the onboard system of underwater means of motion;
- retention at a given depth of immersion by means of buoyancy regulation;
- sonar connection with other swimmers;
- underwater navigation.

Equipment continues to function under the following conditions:
- impact of sea water with salinity up to 35 ‰ at its temperature from -2 ° С to + 30 ° С within the period of full autonomy;
- vibration in the frequency range from 20 Hz to 60 Hz, with acceleration 2g for 30 minutes;
- exposure to ambient air from -20 ° С to + 40 ° С for at least 10 minutes;
- if the breathing bag is ruptured or the pulmonary machine is damaged, the supply of oxygen or CAM to the inhalation hose continues.

Ctrl Enter
Noticed oshЫbku Highlight text and press. Ctrl + Enter
We are
Prospects for the development of the Caspian FlotillaShips built for 28.07.2013 of the year for the Russian Navy. Part of 1
40 comments
Information
Dear reader, to leave comments on the publication, you must to register.