Joseph Whitworth and his sniper rifle

February 17 2016
13
Joseph Whitworth was a British mechanical engineer, inventor and entrepreneur. He developed the Whitworth British standard, which became the standard for cutting the barrel, and also developed his own rifle design. Often this weapon called sniper because of the very high accuracy of the weapon, as well as one of the earliest examples of sniper rifles. At least, during the American Civil War, this rifle was really used only by the most accurate marksmen of the Confederates.


Joseph Whitworth was the most common guy from a simple family, who, however, was able to create several dozen inventions that glorified him on both sides of the Atlantic. Whitworth was born on December 21 of 1803 in Stockport, near Manchester, in the family of an ordinary Protestant priest. Already at an early age, the future inventor began to show great interest in engineering. He was educated in Idle, a suburb of Bradford, and his outstanding skills in mechanics became completely clear when he began working with his uncle, a cotton spinner. He worked for his uncle for four years, after which another four years he worked as a mechanic at a factory in Manchester. After that, he moved to London, where he was able to get a job in the workshop of Henry Maudsley, who was the inventor of the screw-cutting lathe. Here he met James Nesmith, who was the inventor of the steam hammer, the team in the workshop of Maudsley got it right.

While working in the workshop, Whitworth showed excellent locksmithing skills, managed to modify the casting patterns of the main machines (reducing their weight and increasing rigidity), and improved the accuracy of many precision machines. While in London, Whitworth managed to participate in the process of creating the Babbage analytical computer, setting up its mechanism. In 1833, he decided to return to Manchester in order to open his own business here for the production of various machines, already known in England for their quality and craftsmanship. 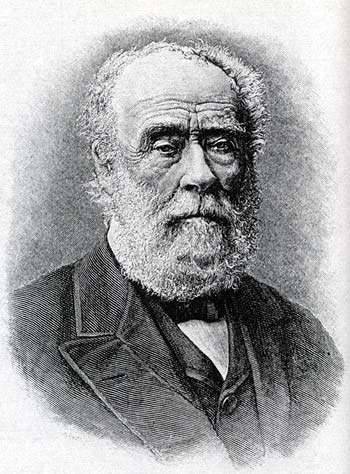 One of the milestones of his work was the invention in 1841 of the standard of fine thread with a fixed angle grooves 55 °. Later, his innovation will become in England the national standard - the British standard Whitworth, which was adopted by local railway companies, previously used various threads. However, the real fame of Whitworth brought his development in the field of firearms.

In 1854, the UK government asked the inventor to develop equipment designed for the mass production of firearms. Earlier, in 1841, Whitworth was already famous for having created a measuring machine that made it possible to measure workpieces with a very high degree of accuracy. The inventor agreed to work on the creation of equipment, but also decided to create a rifle of his own design that could compete with Enfield's 1853 model of the year, some flaws of which were revealed by the Crimean War. In a rifle of his own system, Whitworth decided to use a polygonal hexagonal rifling. This very original solution made it easy to enter a bullet into the barrel. The original was the bullet itself. Its caliber was 0,451 inches, but in its length it exceeded the bullet from the Enfield rifle caliber 0,577 inches, which provided it with a much more sloping flight path and a greater initial speed.

The mass of the Whitworth rifle was 3,4 kg, length - 1245 mm, barrel length - 762 mm. Caliber - 0,451 inches (11,43 mm), the initial velocity of the bullet - 305 m / s. For shooting at long distances the shooter used a standard aiming bar. But at the same time, the rifle also received a removable vertical aiming bar; it was also possible to mount a telescopic sight on top of its barrel, which was adjustable depending on the distance to the target.

Joseph Whitworth patented his polygon-rifled trunk in 1854. His experiments showed that when cutting a hexagonal helix in a handicap, you can simply put a bullet in the barrel bore downwards, and then send it with a gentle movement of the ramrod. At the moment of the shot, an expansion of a cylindrical bullet took place; this was enough to fill the corners of the polygonal bore, providing the necessary obturation. Comparative tests of the Whitworth rifle with the Enfield system rifle took place in 1857 year. The Minister of Defense of Great Britain personally attended the tests.

You can give specific numbers to show the superiority of a Whitworth rifle over Anfield rifle. The maximum range of an Enfield rifle shot was only 1400 yards, and the Whitworth rifle was more than 1800 yards. This was due to the fact that the Whitworth six-sided bullet was not so significantly deformed when fired, twisted more and had a better ratio of length and radius than the usual bullet from an Enfield rifle. In the design of his firearm, Joseph Whitworth has authored two new principles, namely, the hexagonal bore and the mechanical fit of the bullet to the bore. The bullet itself was made of solid metal, which was adjacent to the barrel of the rifle with extreme precision, it was not designed to change shape under the influence of the pressure of powder gases, since the 6 bullet angles forced it to follow all turns of the rifle barrel with extreme accuracy. But although the rifle presented by Whitworth convincingly surpassed the Enfield system in firing accuracy, it never received widespread use in the British army. 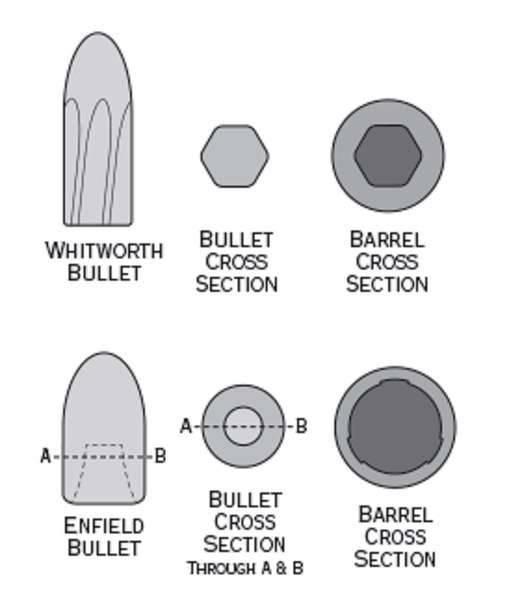 Enfield bullet comparison (below) and Whitworth (above)

The Whitworth rifle could be attributed to luxury goods, since the cost of its manufacture was at least twice as expensive as the production of the Anfield rifle. The rifle created by Whitworth was a very fragile weapon in order to give it to any soldier. The high price and whimsicality of the design forced the British to abandon the mass production of this rifle. In addition, the caliber of the rifle was too small; at that time, the 11,43 mm did not inspire confidence in conservative British officers. Despite all of the above, in the period from 1857 to 1865, 13 Whitworth muzzle-loading rifles were produced, of which 400 (according to other sources, 5400) went to the English army and the fleet. More important, this rifle was acquired in large quantities by the Confederate states during the Civil War in the United States. The population of the southern states lived in a relative backwater, where there were a long tradition of hunting, home protection and, as a result, developed marksmanship skills, Southerners appreciated the Whitworth rifle for its high accuracy.

Apt shooters from the Confederate army, who achieved excellence in their craftsmanship, were usually awarded with a Whitworth rifle, which could often be equipped with a Davidson telescopic sight with a length of 14 inches (in fact, they were the world's first sniper rifles). Since the cost of the Whitworth rifle reached the unthinkable for those years 96 dollars, the price that the Southern States Confederation paid for its shooters was very high. It was with these rifles that the Whitworth Sharpshooters (Whitworth Sharpshooters) regiment was armed, which was analogous to Berdan snipers who fought for the Northmen. Confederation snipers, using these weapons, were able to achieve significant success and an impressive account of the destroyed enemy soldiers and officers. Also, the regiment's snipers specialized in shooting artillery servants of the northerners. 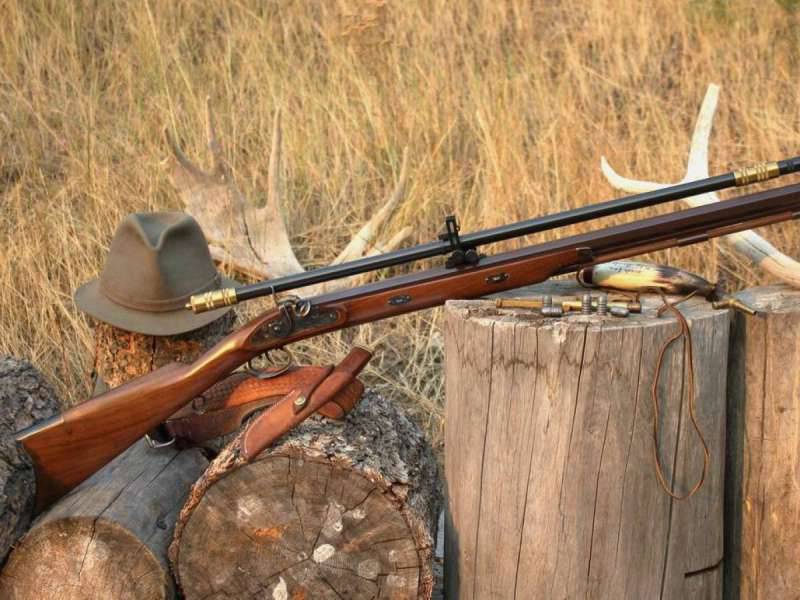 They chalked up and killed several generals. For example, it was from a Whitworth's 11,43-mm muzzle-loading rifle that a Northerner general, William H. Laytle, was mortally wounded by a Confederate sniper during the Battle of Chikamuga. On May 9, 1864 was killed in the Battle of Spotsilvenia by Major General Sedgwick, who commanded the Potomac Army 6 Corps, a bullet hit him in his left eye. The general died when he was engaged in placing his artillery in position. At this time, Confederate snipers were firing at northerners from a distance of 800-1000 yards. But one of the most famous Whitworth rifle shots could be a shot that was fired in July 1863. He almost cut short the life of American President Abraham Lincoln, who, along with a delegation from the White House, investigated the defensive positions near Washington. The bullet flew literally at a distance of a hair from the president, killing the doctor behind him.

However, for all its merits as a sniper and very accurate firearm, the Whitworth muzzle-loading system was a dead-end design. The slow loading and high price of the rifle did not withstand competition with rapid-fire and significantly cheaper breech-loading rifles, which appeared by that time and could provide equally accurate shooting.

At the same time, the rifle was not Whitworth's latest invention in the field of weapons. He managed to try his hand at creating artillery systems by developing a large rifled gun with a bolt box (breech) of 70-mm caliber. Together with this gun, shells weighing 5,75 kg were used, and its firing range was approximately 6 miles. Also in 1855, he patented a spiral-rippled projectile. However, the gun was unclaimed by the British army, whose commanders gave their preference to weapons from Armstrong. At the same time, while trying to increase the breaking strength of weapon barrels of his own design, Whitworth was able to patent the process that he called “liquid-compressed steel” - a method of casting and pressing steel under pressure. After that, he even built a metallurgical plant in Manchester, and the castings from this enterprise were demonstrated in 1883 at the World Exhibition in Paris. 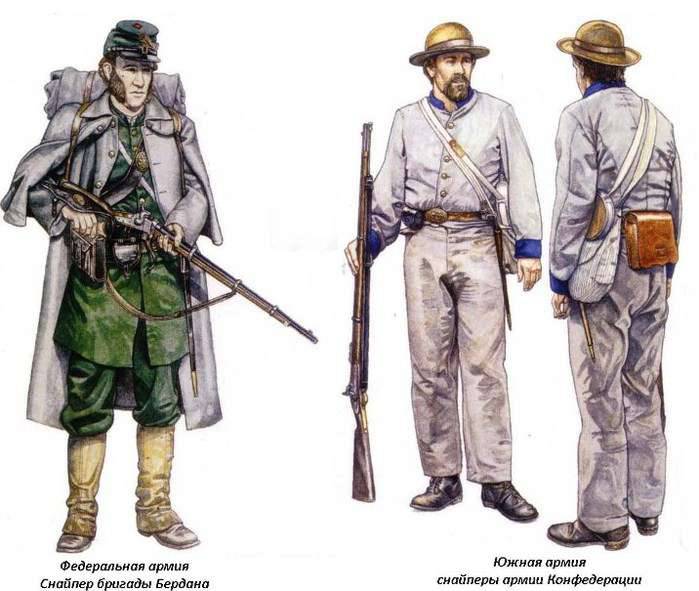 In addition to being an inventor and entrepreneur, Joseph Whitworth was a philanthropist. Being a native of the most ordinary, poor family, he perfectly understood how difficult it is for talented people to make their way into life. Therefore, he sought to help everyone get what he did not have - a good education. During his lifetime, he sponsored the University of Science and Technology in Manchester, and also stood at the origins of the School of Design. In 1868, he even established his own personal scholarship, which was awarded for outstanding achievements in the field of mechanics. Often he donated hundreds of thousands of pounds to the state to develop the country's education system. Died Whitworth in Monte Carlo 1887. Shortly before his death, the inventor managed to publish a will, in which he appealed to the executor to spend all his money on projects that would be related to education.

Ctrl Enter
Noticed oshЫbku Highlight text and press. Ctrl + Enter
We are
Sniper fire in local warsDragunov sniper rifle
13 comments
Information
Dear reader, to leave comments on the publication, you must to register.