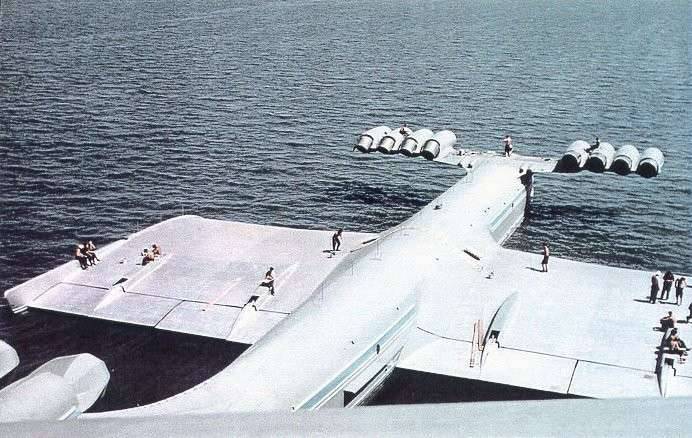 
“They found only one leg in the water, with a boot in camouflage. So they buried it, ”eyewitnesses recall of the crash of the Orlyonok ekranoplan in the Caspian Sea in 1992. During the 2 turn, when driving on the “screen” at the height of the 4 meter and the speed of 370 km / h, “pecks” occurred, longitudinal oscillations began with changes in height. In the process of hitting the water, the wig crashed. The surviving crew members evacuated civilian cargo ship.

Similarly, the Caspian Monster ended his career, smashing to pieces in 1980 year.

The Caspian Monster repeated the fate of its predecessor, the SM-5 WIG (a copy of the 100-meter CM at the scale of 1: 4), who died in the 1964 year. “He swung sharply and lifted. The pilots turned on the afterburner to climb, the device broke away from the screen and lost stability, the crew died. ”

Another “Eaglet” was lost in 1972. The whole feed with the keel, horizontal tail and cruise engine NK-12MK fell off from a blow to the water. However, the pilots were not taken aback, and, increasing the speed of the nasal take-off and landing engines, they did not let the ecologo fly into the water and brought the car to the shore.

The described case is issued as a sample of high survivability and safety of WIG. But the question can be formulated differently: show the ship or aircraft, which is able to tear off the stern with one awkward movement of the steering wheel.

Deadly danger inherent in the very idea of ​​flight on the screen. The basic principle of the aircraft is violated: the farther from the surface, the safer. As a result, pilots do not have enough time to level the car and take any measures in case of a contingency.

In the episode with the foot in the boot, the crew of the “Eaglet” was still “fortanulo”: their speed did not exceed 370 km / h. If this happened at the speed of 500-600 km / h (these are the figures indicated in the ground-breaking devices), no one would have survived.

RPC becomes completely out of control at high speeds. He has no contact with water, and he cannot, like an airplane, tilt a wing: there is water a few meters below. Usually soft and supple, at a speed of 500-600 km / h, it becomes like a stone. Media density varies 800 times. What should be the strength of the construction of an airplane (and its weight!) In order to withstand such a “touch”? And what to do if a ship or another obstacle suddenly appeared on the course?

I'm not talking about flights over ice or tundra. Try to “hook” the ground at a speed of 370 km / h.

The ekranoplan “Eaglet” had three times more fuel consumption than the An-12, similar in load, created a quarter of a century before the “Alekseev miracle”.

The Eaglet design was heavier on 85 tons (dry weight of 120 versus 35 tons on transport aircraft). Three times overruns. This difference (85 t) is too big to blame on the imperfection of materials and technologies. The brainchild of Rostislav Alekseev broke the laws of nature. The aircraft must be as light as possible. The ship must be strong (and therefore heavy) for safe walking on the waves. It was impossible to combine these two requirements in one car.

Airplanes are rapidly flying through the rarefied layers of the atmosphere. EKP drags near the water, where the atmospheric density reaches maximum values. The monstrous appearance of the ECP, hung with engine garlands, also does not contribute to the reduction of oncoming air resistance. Part of the engine is turned off in flight and serves as a useless ballast. 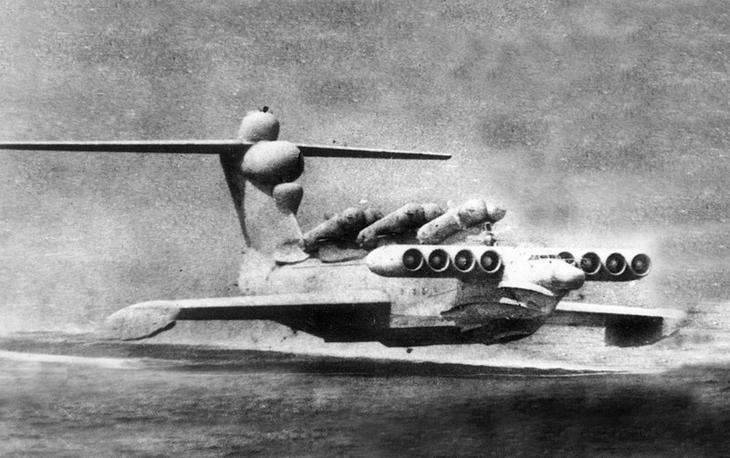 Hence the results. In terms of flight range, WIG is three or more times inferior to aircraft with the same payload. Given that the aircraft can fly anywhere in the world, regardless of the underlying terrain.

RPC does not need an airfield, but everyone needs an 100-meter dry dock for parking, inspection and repair. As well as maintenance of a garland of several jet engines suffering from constant water spray and inevitable deposits of sea salt on the compressor.

Yes, hell with two! The Eaglet did not even have a barometric altimeter. The whole complex of its navigation flight instruments was designed to fly a few meters from the surface.

No altitude testing has ever been carried out. There were no willing suicides to get behind the wheel - the wing area for such a heavy machine is too small. Breaking away from the screen meant losing control of the car, which was “successfully” demonstrated during the crashes of both Eaglets.

The carrying capacity of the heaviest ekranoplanes of Alekseev Design Bureau was 0,1% of the deadweight of the ocean linear container ship. And in its value is inferior even to transport aircraft aviation.

The transport capacity of the Eaglet Orlenok transport unit was three times less than that of the An-22 Antey military transport aircraft, which made its first flight in the 1966 year.

Do not be confused by the record of the “Caspian Monster”: 544 tons - this is its take-off weight, of which only about one hundred tons accounted for the payload. The rest is the weight of the fuselage and the “garland” of ten jet engines taken from the Tu-22 bomber squadron.

“Lun” dragged a good ballast of eight engines from the airbus Il-86.

“Eaglet” was also not easy. Its tail NK-12 had comparable power with four engines of the An-12 aircraft. But that is not all. In addition to the NK-12 from the Tu-95 strategic bomber, two engines were hidden from the jet Tu-154 in the nose of the car. 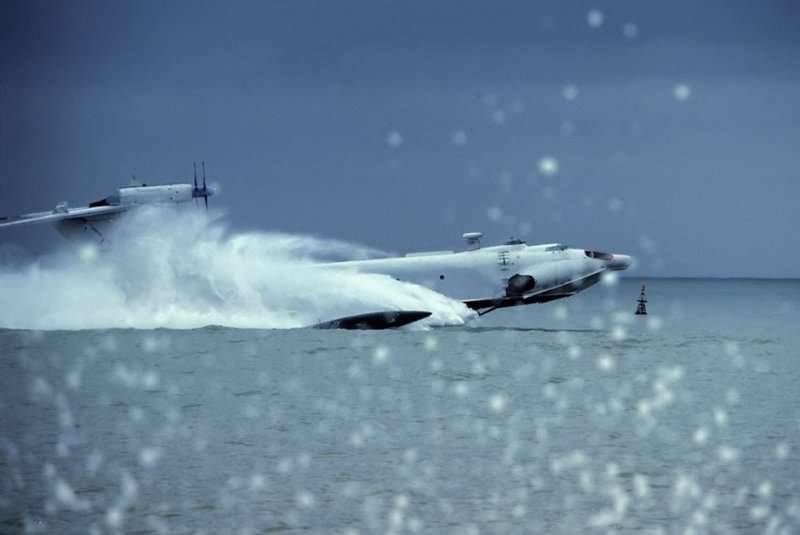 Needless to say, that according to the "payload" indicator the ekranoplan corresponded to the ancient An-12? Those who created such an apparatus triumphed over technology over common sense.

The question is - for what?

ECP was still twice as slow as conventional transport aircraft. Not to mention the supersonic bomber-rocket carriers.

If radars distinguish mines, buoys, periscopes, and submarine retractable devices, how should the Xlum-ton “Lun” become invisible, with a wingspan of 380 and the height of the keel from the five-story house ?!

The same applies to the thermal and hydroacoustic background of this monster.

When detected from space, the main unmasking factor is not the sea object itself, but its wake. What is the wreck of the “Lun” ekranoplan, if the span of its wing exceeds the flight deck of the Mistral helicopter carrier? 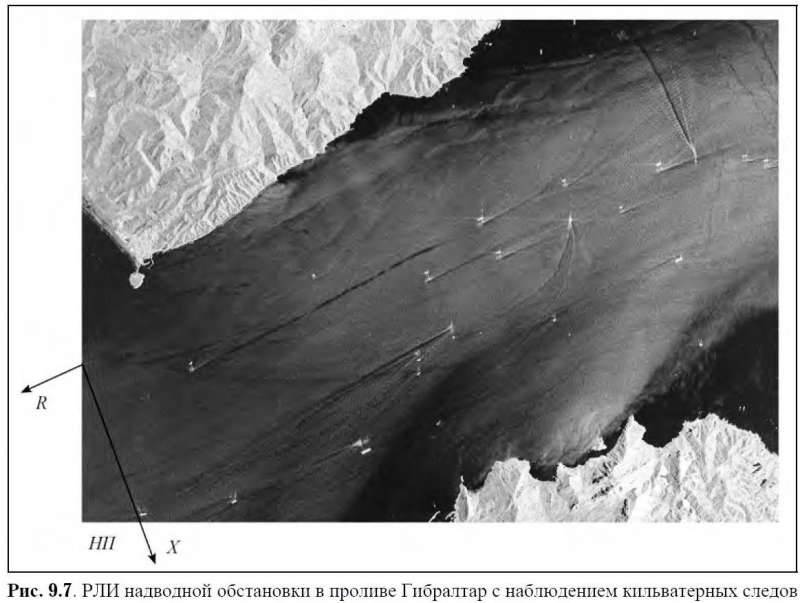 And the power of impact of jet streams on the surface of the water and the disturbances caused by them are clearly visible in the following video:

The starting engine PKR “Mosquito” burns a ton of gunpowder in 3 seconds. From this, the carrier may have problems.

The destroyer is too big to pay attention to such trifles. When returning to the base, the salaga remove a layer of soot and paint the boards with fresh paint. But what will happen with flying ekranoplan? The ingress of powder gases to the motor “garland” leads to obvious consequences:

A) The risk of a surge and subsequent aircraft crash.

B) Damage to engines.

Plus the necessary damage to the fuselage structure by the fiery torch of the launch accelerator.

Combat aviation does not have this problem. Guided missiles are first separated from the nodes of the suspension. Their engines start in a second of free fall, at a distance of a couple of tens of meters from the carrier.

The heaviest ammunition launched directly from the suspension was a domestic unguided rocket C-24 with a mass of 235 kg (the so-called “pencil”). Pilots who flew in Afghanistan recalled that it was easy to get a surge and stop engines after starting the C-24. Apart from the obvious difficulties with balancing and stabilizing the flight of the aircraft after the separation of a powerful heavy rocket. Therefore, only the most experienced crews were allowed to use “pencils”.

A mock up of the Lun project was installed at the Sandy Balka training ground in the village of Chernomorsk. October 5 and December 21 1984 was held two start-up models of "Mosquito", equipped only with starting engines. The first launch was made from the right container of the nasal pair of launchers, and the second launch - from the left container of the tail pair of launchers.

After the first launch, the 9 tiles were damaged, after the second - 2. Two launches of ZM-80 missiles were conducted on the Caspian. The target was the BKSch project 436 bis. The first launch was unsuccessful due to crew errors. During the second launch, a two-launch volley was fired (with an interval of 5 seconds). Start was counted as successful.

On the basis of a set of indicators LOAD x SPEED x COST OF DELIVERY x SAFETY x HIDDEN the WV have no advantages over existing vehicles. On the contrary, they lose absolutely in all respects ordinary aircraft. Surpassing ships in speed, WIGs are inferior to them in 1000 times about loading capacity and at least 10-15 times in cruising range. In view of this, they are unable even partially to undertake the tasks of maritime transport. The combat radius of the “Moon” is not enough even for operations in the Black Sea, not to mention the pursuit of aircraft carriers in the Atlantic.

The use of ECP is unpromising even when solving a narrow circle of problems traditionally mentioned by fans of this type of equipment. If you seriously wanted to create a means to provide emergency assistance to the crews of ships in distress, the choice fell on vertically taking off amphibious aircraft (such as the Soviet project of the BBA-14 anti-submarine aircraft). Twice as fast, twice as fast reaction time as an WIG. At the same time, due to the vertical take-off and landing, such an amphibian could be used in the open ocean, with waves of 4-5 points. Here you have all the “Savior”.

As practice has shown, even such a tool was considered redundant. In reality, it is easier to send ships passing near the ship to the crash site and to reconnoiter the square with the help of coast guard airplanes and helicopters. Despite the relatively low speed (~ 200 km / h), helicopters can carefully examine the surface from a height, having detected and removed people from the drifting life raft.

Those who advocate the construction of these cattle houses, simply try to ignore the real facts about the operation of WIG. After comparing the parameters of “Luney” and “Orlyat” with conventional aircraft, there is no doubt about the uselessness of this type of technology. Repeated lag in all flight performance, efficiency and payload, exacerbated by the complexity of operation and the lack of any need for 500-ton machines flying over the water with the help of “garlands” of ten aircraft engines.

Ctrl Enter
Noticed oshЫbku Highlight text and press. Ctrl + Enter
We are
Ekranoplanam - to be!Flying over the waves
378 comments
Information
Dear reader, to leave comments on the publication, you must to register.