Slaughter something prettier (Part of 5)

“He says that if you refuse, they will ... kill you.” Joke.
- Joke!
("The Caucasian Captive, or Shurik's New Adventures")

The appearance on the screen of the unforgettable trinity (the scene in a restaurant) always causes laughter with the way Skill, Experienced and Balbess skillfully shared their national Caucasian costume, including the dagger. Well, yes, after all, what a mountaineer without a dagger, but here he hangs right on his belly and ... nothing is visible behind him. Meanwhile, this is a most interesting example for military psychology: clothes are enemy, the war with the enemy goes from 1817 to 1864 for a year and, nevertheless, both clothes and weapon this enemy is becoming so popular that they are worn by officers of the regular Russian army and the Cossacks. The name of outerwear - Circassian - indicates its specific origin and ... nothing! 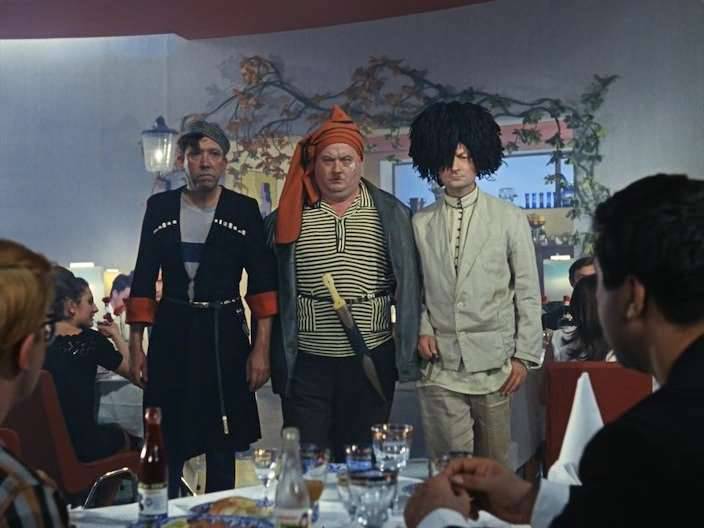 True, here we can say that there were after all the highlanders loyal to the White Tsar, and that His Majesty the Imperial escort at the time of these almost all consisted of the Highlanders of the Caucasus and was dressed in his national uniform! Obviously, perfection is “guilty” in many ways. The perfection of clothes, the perfection of drafts (from the Adyghe / Circassian "seshkhue" or "sashho" - "big" or "long knife"), the perfection of the dagger - kama, included in the set of weapons of the mountain warriors - that's what made all of them use their opponents. Although, the beauty of this weapon also played a significant role.

Dagger 1845 France. The beauty of the scabbard and skillfully made handle, of course, make an impression. But, how to hold such a dagger in your hand? Los Angeles County Museum of Art.

It is here that we come to the eternal topic: beauty and expediency. “And the dung basket is a wonderful item,” said Socrates, “and the golden shield can be ugly if the first one is done perfectly for its purpose and the second is bad!” That is, it is obvious that there are more harmonious weapon samples, including with regard to decorations than others. In some embellishments prevail and then it is no longer a weapon or almost no weapon, in others rude utilitarianism of a kitchen knife or an equally vulgar "beauty" of a prison "finca" prevails, but the third is just what we denote by the notion of harmony . In such a weapon together practical feasibility and decoration, and as a result we have the aesthetic perfection of the product. And here, perhaps, the best sample than the Caucasian Kama simply can not be found!

The Indian "dyke" dagger zafar after the XVIII - XIX centuries. Length with sheath 57.5 cm; without sheath 47.6 cm; blade width 3.3 cm; weight 348.7 g; 201.3 scabbard weight Metropolitan Museum, New York. In the collection of the museum from 1935. As you can see, Hindus, too, were able to produce straight blades, actively used themselves, and skillfully decorated such daggers. Metropolitan Museum, New York.

Here again, we turn to the theory, and she says that the eternal confrontation between the West and the East gave rise to two types of blades: the piercing straight lines (the weapon of the West) and the chopping “curves” (the weapon of the East). The Romans, who used the tactics of disciplined legions and understood before others, that it was better to prick than to chop - no need to brandish! That is why, for example, in the British cavalry in 1908, they again introduced a piercing sword, widely used in the First World War. However, the curved blade is not a hindrance to the rider, as it inflicts very deep incised wounds. Another thing is that it should not be too curved so as not to lose its piercing functions. Examples are the Japanese katana and, again, “our” piece, with which you can chop and prick! 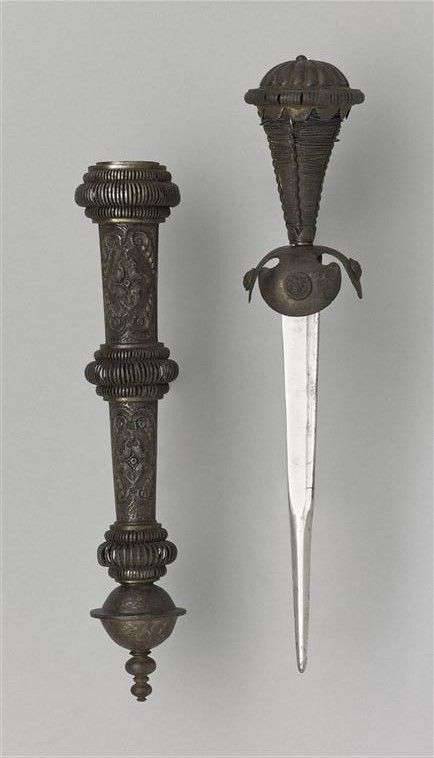 Dagger Landsknehtov XVI. Louvre Paris. It seems to be a very functional blade, designed to break through the chain mail. But you only imagine how his handle lies in your hand, and how you act to them? Although the sheath, yes, the sheath is very beautiful.

As for the dagger, it is proved that the blow from top to bottom is the strongest. The curved blade in this plan loses the stronger than it is curved!

And here again, it was the Highlanders of the Caucasus who decided the issue of choosing the best weapon, armed with a curved sword and a straight dagger. The first is best to chop at a gallop, the second - to stab the enemy in melee, although a long and durable blade allows you to apply kama and slashing blows. That is, it is truly a universal weapon!

And now a little about the role of kama in stories national ... literature. After all, it was Kama who hung on the Circassian belt from N.S. Martynov and it is thanks to her that Lieutenant M.Yu. Lermontov called him "a savage with a big dagger" or "a mountaineer with a big dagger" or simply "Mr. Dagger." The “defenders” of Mr. Martynov usually say that Lermontov supposedly “himself ran into a duel” with his endless mockery. He mocked, mocked, well, and the complement of man. However, Martynov was by no means without sin — he grew enormous sideburns for himself, and used to appear in a Circassian costume with an exorbitant size with a dagger, in a white hat, with a grim and silent look.

It is fair to say that Martynov used to go in the form of the Grebensky Cossack regiment. But at the time of the ill-fated quarrel in the house of the Versilins, he was retired and therefore "made various free additions to her." So, he was dressed in white Circassian and black velvet or silk beshmet, or, conversely, wore a black Circassian and white beshmet. In rainy weather, he covered his head with a black hat instead of white. The sleeves of the Circassian rolled up, which gave "his whole figure a bold and defiant look." 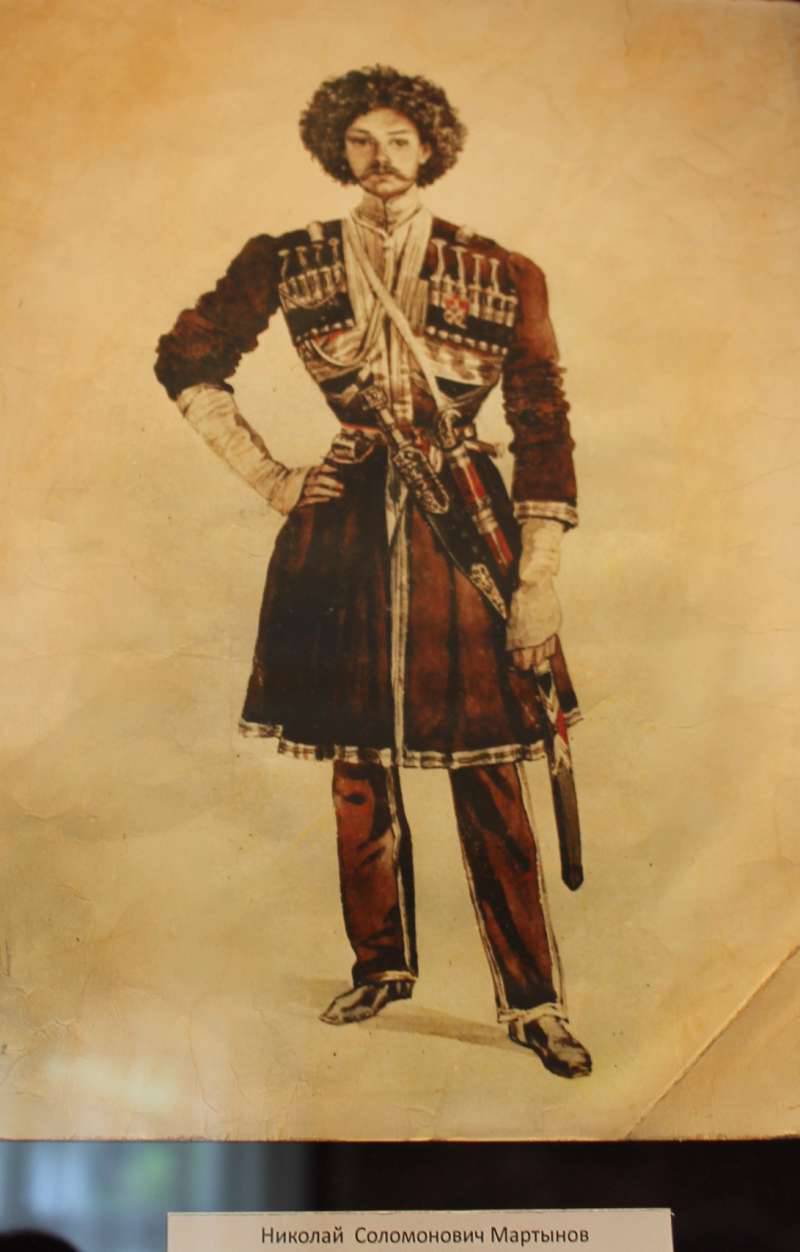 That is, he behaved like a ... modern and not very clever demob, well, but then veils were talking about such people! Martynov, of course, understood that, handsome, tall, looks spectacular, but like every stupid person was prone to posturing. Here Lermontov's hand itself stretched to a pencil to capture such a colorful figure ... 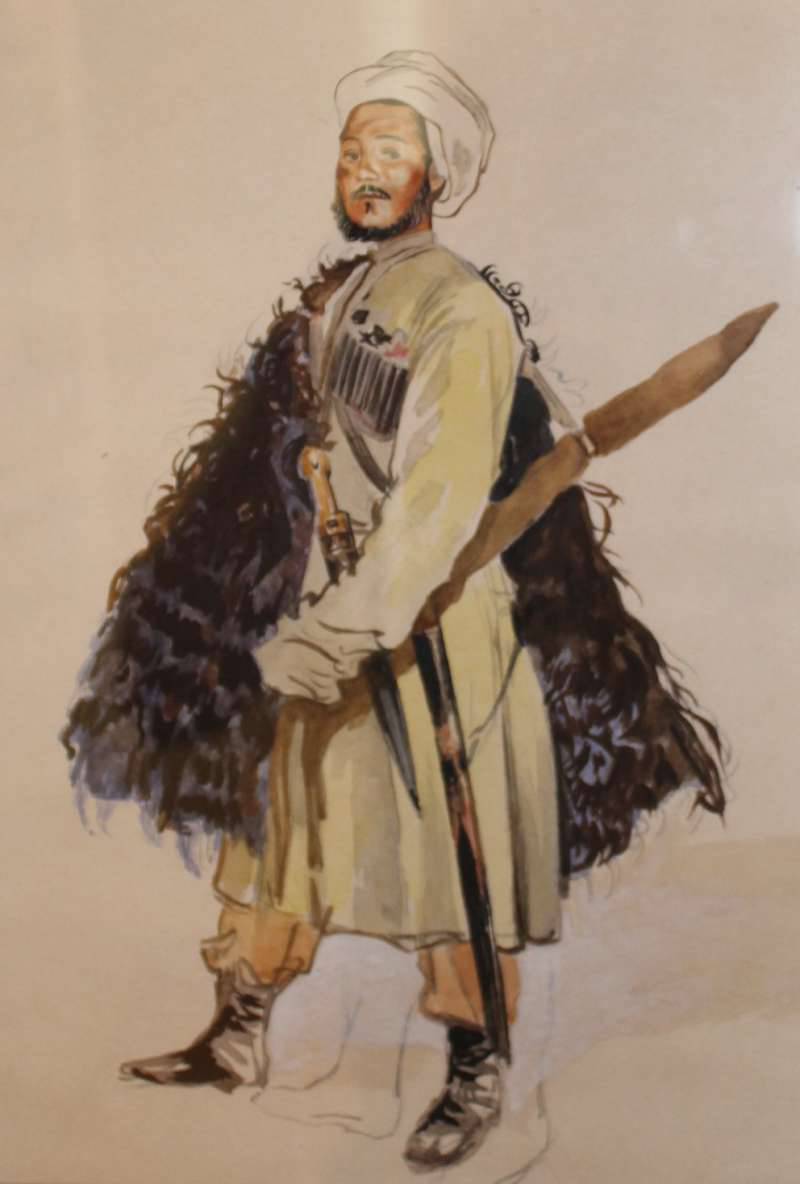 There is another drawing. On it, Martynov, with a huge dagger, literally from the belt to the ground, talks with a miniature Nadya Verzilina, who also has such a small “ladies'” dagger on her belt. 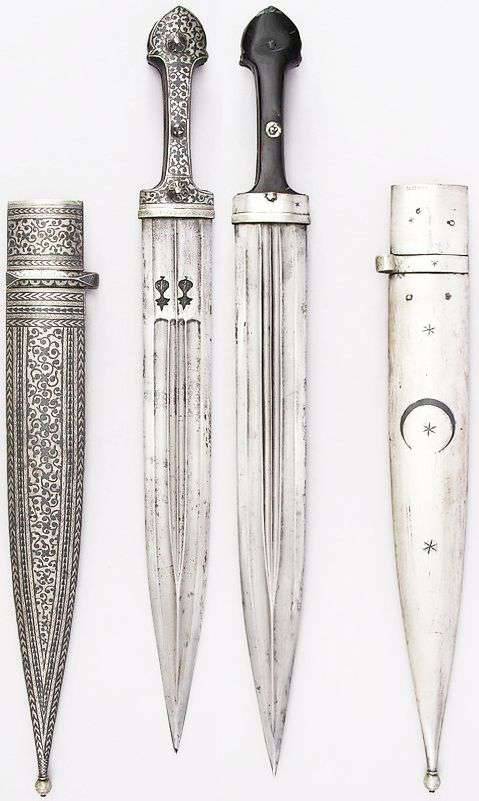 Kama in silver sheath XIX centuries. Steel, horn, silver, mobile. Length xnumx; length without sheath 55.4 cm; blade length 51.4 cm; blade width 37.8 cm; weight 5.4 g; 445.1 scabbard weight. An interesting feature of blade profiling: at the heel are two broad lobes, and then four narrow (front side). On the back side, two broad and two narrow dale reach the narrowing of the blade. Metropolitan Museum, New York. In the museum collection with 394.1

It is possible that if this ill-fated dagger was not at Martynov (“it is not clear who is attached to whom: Martynov to the dagger or dagger to Martynov!”) The fatal duel would not have happened, and the poet Lermontov for many years worked in the field of Russian poetry and prose , but ... it was precisely between them that the “big dagger” rose, and this dagger turned out to be, ironically, a mountain Kama perfect in all respects! 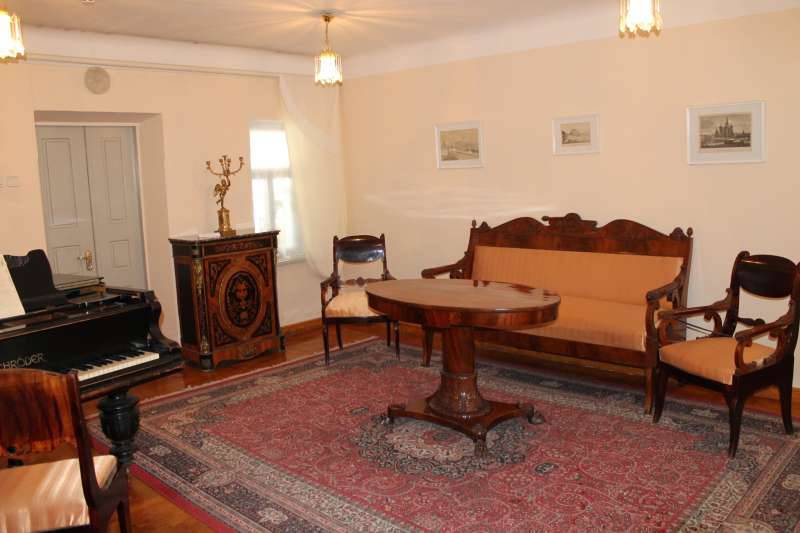 Here, in this drawing room in the house of the Verzilins in Pyatigorsk, the fate of the great poet was decided.

As for the history of the Kama itself, the name of this dagger comes from the Abkhaz aҟam; and Kabardino-Circassian Kam'e, that is, it came to us from the Abkhaz-Adyghe languages. The blade is traditionally long from 30 to 50 cm, straight and double-edged. On the blade can be dol, and the valleys relative to each other can be located asymmetrically, which, of course, increases its rigidity. The cross section of the blade - lenticular or rhombic. The narrowing of the blade to the edge smooth. The handle is narrow, has no crosshairs, the top is massive. Attached to the dagger sheath, which are usually worn on the belt with a set.

As you can see, there are no rules without exceptions. Here is the Kama, but with a curved blade and no valleys, XIX century. Steel, leather, wood, silver. Length with sheath 45.2 cm; length without sheath 43.8 cm; blade length 31.8 cm; blade width 4.3 cm; weight 280.7 g; 79.4 scabbard weight Metropolitan Museum, New York. In the museum collection with 1935

Depending on the region, Kama has its own, so to speak, national peculiarities. So the Azerbaijani blade has a blade ornamentation by its distinctive feature. At the same time, both vegetable and geometric patterns can be used in the ornament, as well as characteristic Muslim ornaments - arches, winding branches with stylized leaves rarely placed on them. Also used carved ornament. 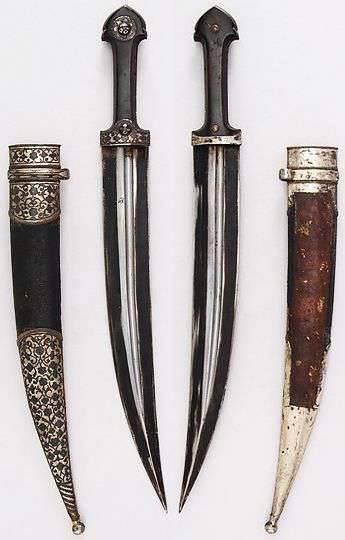 Armenian Kama has a head of elongated outlines, which gives it the shape of a typical eastern arch. Popular is the decoration of scallops in the form of tulips, which are placed on the handle and on the sheath. Gold and silver notches are often used simultaneously.

Georgian Kama has a short and wide blade, besides there are caps with edges cut out in the shape of flower petals on the handle. The blades of Georgian daggers are usually decorated in the middle part with patch welding plates, and their heels can have figured through cuts bordered with a gold or silver notch. Silver finish handles and scabbard made a solid floral or floral patterns in blackening technology with engraving, as well as with gilding. Dagestan daggers have a very elongated head of the handle. In this they look like Armenian daggers. But the daggers of masters from Dagestan were considered at all times, and even now they are considered the best in the Caucasus. They are also called "Kubachinsky" by the name of the village where they are produced.

The first thing that catches your eye when you consider such a dagger is the perfect ratio of the length of the blade itself with the width and also with the dimensions of the handle - not too big and not too small. In addition, their blades are usually made according to the Lezgin model - with the valleys shifted relative to each other. This design gives the greatest rigidity to the blade and makes it the easiest. In the valleys, etching often makes a pattern that copies the pattern that occurs in welding steel. 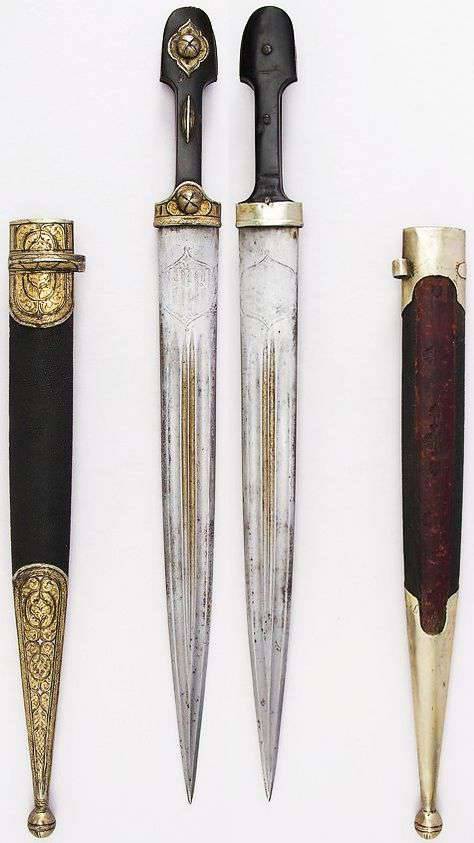 The space between the valleys and the blades is usually crowned with wide dark stripes, which gives the blade a completely unusual look. The heads of the arms are also elongated, or they repeat the shape of the head of the so-called official sample adopted in the Russian Cossack units, especially in the statutory - daggers of machine-gun commands and bebuts of artillerymen. The decoration technique is similar to the traditional Kubachi decoration technique of any metal products.

So perfection is perfection, beauty is beauty, and it is Kama that turned out to be the straw that, as they say in the East, broke the camel's back. That is, played a fatal role in the fate of Lermontov and Martynov ...