February 19 2016
22
For the solution of a number of specific tasks small weapon must have high firepower and small size. In particular, such systems are necessary for special units to work in confined spaces inside buildings. To solve such problems most often used submachine guns with the appropriate characteristics, but it is proposed and automatic weapons under the intermediate cartridge. In addition, some new projects involve the use of original ideas. For example, the Israeli automatic rifle Gilboa Snake DBR, as envisioned by its creators, must have high firepower thanks to the use of two barrels.


On the existence of its new project Israeli company Silver Shadow Advanced Security Systems Ltd. Announced a long time ago, in the first half of 2012. Then the first information about the new development was published, which immediately attracted the attention of specialists and the interested public. The project belongs to the line of small arms of the Gilboa trademark, and also received its own designation Snake DBR (Double Barrel - “Double Barrels”). In the summer of 2012, shortly after the announcement, a promising automatic rifle was first demonstrated at the Eurosatory exhibition in France. In the future, these weapons were repeatedly brought to various exhibitions. In addition, according to some data, its mass production has already been mastered. 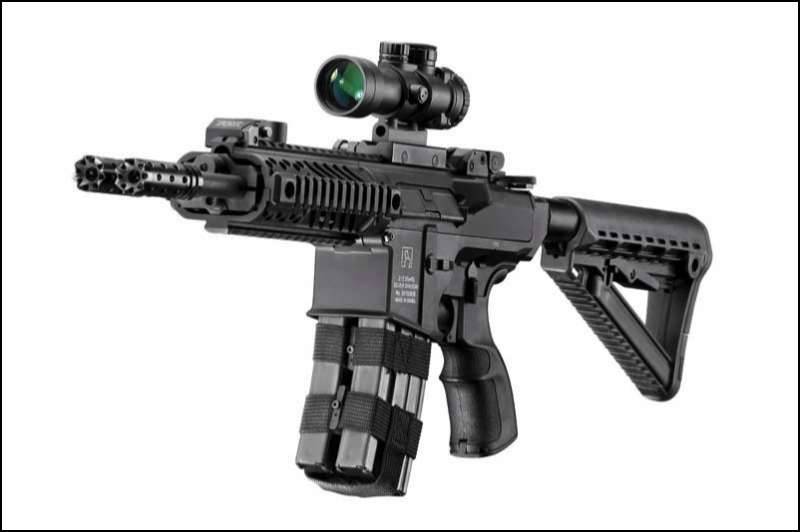 At the heart of the Gilboa Snake DBR project are two main ideas related to combat qualities and weapon ergonomics. By using new ideas and solutions, it was planned to significantly increase the firepower of the rifle, as well as to reduce its dimensions. The latter requirement, in particular, led to the use of the original layout of the internal components of the weapon, which distinguishes it from other similar samples.

Increasing firepower is usually achieved in several ways: by increasing the technical rate of fire, by using a more powerful cartridge, or by increasing the number of trunks. Israeli experts have decided to retain the standard 5,56x45 mm NATO cartridge, but at the same time introduce an additional barrel and the corresponding automation components into the design of their rifle. It is this feature of the weapon denoted by the abbreviation DBR in the title.

The Gilboa Snake DBR rifle is built on the basis of the widely used AR15 platform, however, it is notable for some new ideas and solutions aimed at improving performance and reducing size. In particular, due to some new parts, it was possible to significantly reduce the overall length of the weapon in comparison with systems without such nodes. In addition, the very fact of using two trunks is a significant difference. 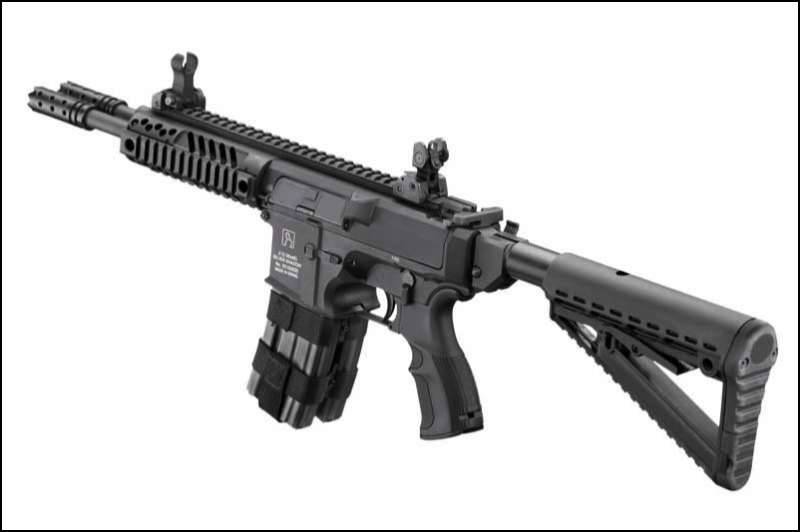 Within the framework of the Gilboa Snake DBR project, two versions of rifles were initially created. One was intended for armies or security forces, and the second was supposed to be offered to civilian customers. Both versions of the rifle were based on common solutions, but there were noticeable differences in the design of automation. In particular, it is the military option, as opposed to civilian, that when used regularly, provides a double increase in firepower.

The basis of the design of the rifle "Snake" is a receiver, divided into two parts. The upper part of the receiver is an oblong detail of complex shape. Its front part is made in the form of a perforated barrel casing, performing the functions of the forearm. The back, in turn, accommodates the bolt groups and other mechanisms. The Picatinny rail is provided along the entire length of the receiver for mounting the sighting devices. In the center of the lower part a hinge is provided for connection with the lower part of the receiver.

Reception shafts for shops, trigger mechanism and fire control knob are part of the lower part of the receiver. This product also includes the rear wall of the receiver with attachments for the butt. A characteristic feature of the Snake DBR rifle is the absence of a tubular recoil housing placed in the butt. Instead of a similar spring, a different type of system is used. 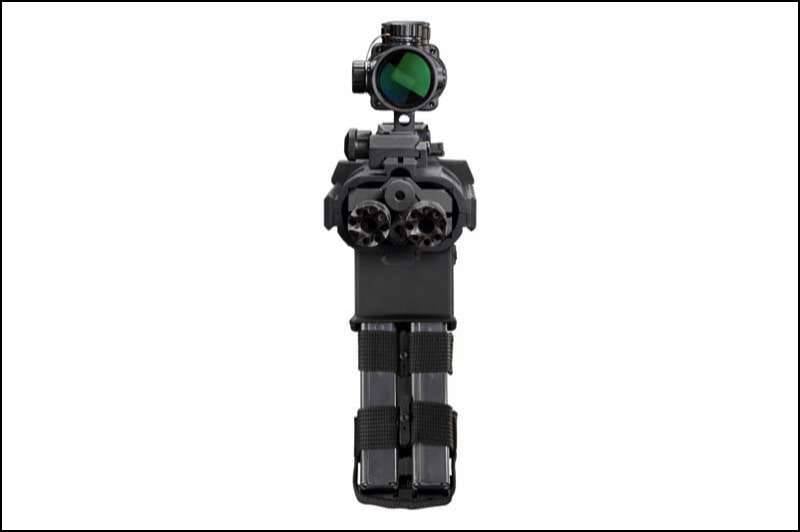 Front view, you can consider the muzzle of the trunks and twin stores. Photo by Gilboa-rifle.com

The Gilboa Snake DBR rifle in its basic configuration is equipped with two threaded barrels of 5,56 mm caliber 9,5 inch long - 241 mm or 43 caliber. The trunks channels are rifled in increments of 7 inches (mm 178). Both barrels are equipped with muzzle brakes-compensators of compatible types. Due to the use of two simultaneously firing barrels muzzle brakes are an important element of the weapon, simplifying its use.

Automatic weapons based on the principle of removal of powder gases. In this case, there are two options for a gas engine: army and civil. In the military version, both barrels are connected to a common gas pipe, and two valves are connected to a single piston. The civilian version of the rifle has two independent gas engines, one for each receiver group.

Inside the receiver, there are two independent (or connected - depending on the modification) gate groups. According to reports, these devices completely repeat the design of the corresponding elements of the AR15 family rifles. The movement of the valves is carried out by the removal of powder gases, the barrels are locked by turning the valves. For cocking rifle has a standard T-shaped handle, derived in the rear of the receiver. The handle is connected to both bolt groups. 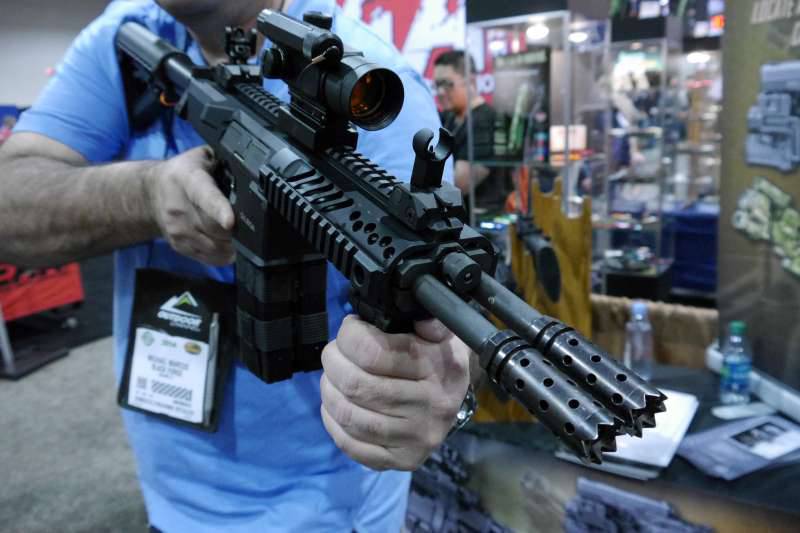 Weapons based on the AR15 platform have a return spring placed in the tubular casing outside the receiver, which, among other things, does not allow the butt to be folded. Gilboa Snake DBR rifle received other return springs. The required flexible elements are not located behind the bolt groups, but in front of them, partly next to the trunks. Due to this, it was possible to ensure the correct operation of the automation and also to abandon the tube behind the weapon.

Perspective automatic rifle can be equipped with two types of trigger mechanisms for military and civilian use. USM for armies is equipped with one trigger and allows simultaneously firing from both barrels, both single (one shot from each barrel) and bursts. The civilian version of the rifle has two triggers, each of which controls its own barrel. Above the pistol grip in both versions there is a movable flag capable of taking one of three positions, blocking the trigger or allowing you to fire single or a queue.

The ammunition supply system is based on the existing platform, however it has been refined in connection with the use of two barrel groups. It was proposed to place standard magazines on 30 5,56x45 mm NATO ammunition into the lower receiving shafts of the receiver. The lower part of the receiver is made in the form of a massive single unit, but it provides for a partition dividing the total volume into two independent mines. For greater ease of use of weapons proposed a special system of belts and rigid elements, through which the two stores are assembled into a single device, greatly facilitating the reloading of weapons. At the same time, the rigid elements of the system keep the stores at the required distance from each other, ensuring their proper installation. Latch stores standard. 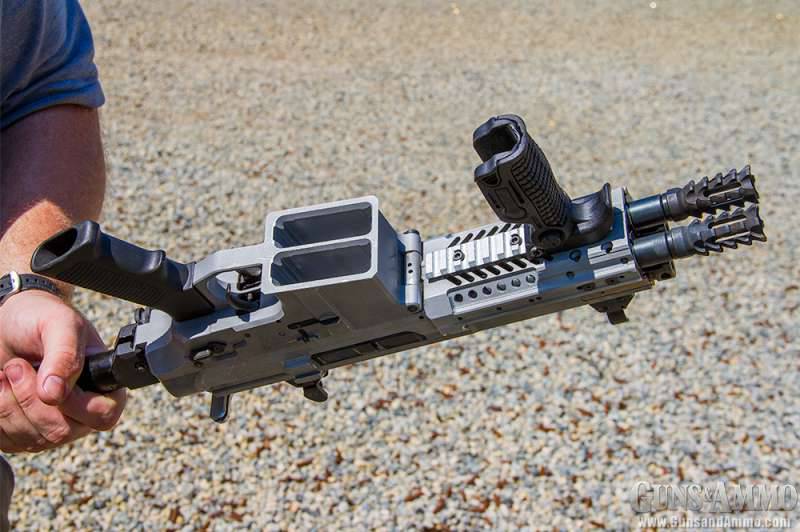 Civilian version of the rifle, bottom view. One can see the mines of shops and two triggers. Photo Gunsandammo.com

The extractors of the two valves are recycled in accordance with the new working conditions. Windows for ejection sleeves are located on both side surfaces of the receiver. To avoid contamination of the weapon, the windows are closed with hinged covers. Sleeves are thrown in both directions.

Thanks to the use of a long Picatinny rail on the upper surface, the Gilboa Snake DBR can be equipped with various types of sights. So, in the initial configuration, the weapon receives a diopter sight with a front sight on bases compatible with the bar. In addition, the use of other compatible sights.

Three additional strips for mounting accessories are placed on the side and bottom surfaces of the forearm. At the same time, a vertical “tactical” handle is installed on the lower bar at the factory to facilitate the retention of weapons with non-standard transverse dimensions. On the rear wall of the receiver has a mount for a removable butt. The Snake samples on display had a telescopic butt similar to that used on M4A1 rifles, etc. weapons. If necessary, the butt can be removed from the rifle.

Due to the use of a relatively short barrel and other solutions aimed at reducing the size, the Gilboa Snake DBR automatic rifle has the maximum length (with a fully folded butt) of all 800 mm. When disassembling the butt, the weapon length is reduced to 495 mm. A rifle with butt and no magazines weighs about 4,2 kg. Thus, it can be recognized that the task of reducing the size has been solved successfully.

Shooting characteristics are unfortunately unknown. It can be assumed that the technical rate of fire Snake DBR is about twice as high as that of counterparts based on the same platform, calculated under the same cartridge. 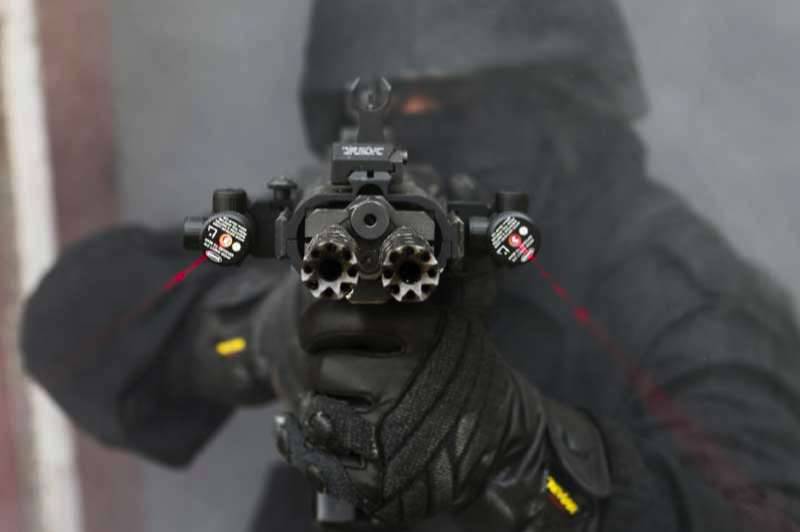 Fighter with a rifle Snake DBR. Used side bars. Photo by Gilboa-rifle.com

Given the relatively short barrel, the Gilboa Snake DBR product can be categorized as an automatic rifle. Nevertheless, the company Silver Shadow planned to develop and "full" rifle. This weapon had to retain the basic design features of the base carabiner and get two barrels 16 inches long (406 mm), which could have a corresponding effect on the main characteristics of the weapon.

The first demonstration of the Snake DBR rifle took place in the middle of the 2012 of the year. After that, the company Silver Shadow continued to work on new weapons, and also conducted all the necessary tests. Upon completion of all the necessary work weapons offered to potential customers. At the same time, the military version of the rifle is offered to the armed forces or law enforcement agencies of different countries, and for civilian shooters, a modification with other capabilities and characteristics is intended.

Snake DBR’s full-fledged entry into the civilian market was announced in the summer of 2014. During the exhibition, organized by the association NRA, representatives of the company Silver Shadow told that the Israeli company managed to find a partner in the United States, who will soon start producing civilian rifles. Probably, by now the first shipments of such weapons, which managed to find new owners, have already left the assembly line. Any information about the orders for the supply of military modifications are not yet available.

Over the past few decades, gunsmiths of many countries have tried to create and put in a series of double-barreled automatic weapons, characterized by increased characteristics. Almost all samples of such systems have not gone beyond the prototype testing stage, which led to the closure of projects. Due to the specific characteristics and complexity of the design, such a weapon cannot surpass existing patterns of the traditional layout. The project Gilboa Snake DBR has already managed to reach mass production and go on sale. However, while an interesting and unusual weapon can not compete with other samples. However, in this case, the project of Israeli gunsmiths is of some interest.