February 5 2016
8
One of the main tasks of gunsmiths for a long time was to increase the rate of fire. Various ideas and solutions were proposed that made it possible to significantly increase this parameter, but not all of them were able to reach full operation. Nevertheless, experts from many countries continued to work, trying one or another of the original proposals. For example, in the late fifties or early sixties of the last century, the gunsmiths of China tried to create a double-barreled machine gun with the corresponding characteristics. As the basis for this weapons An existing serial sample was taken.


In most sources, the original Chinese machine gun is referred to as “double-barreled Bren”, but this designation is not quite correct. The fact is that the Chinese army did not have British Brens, but used other similar light machine guns. The double-barreled model leads its “pedigree” from the Czechoslovak ZB vz.26 machine gun, which also became the prototype for the Bren product. Weapons from Czechoslovakia in significant quantities came to China, which allowed to count on a high degree of unification of various samples.

The creation of the double-barreled machine gun was preceded by the following events. In 1927, the Czechoslovak firm Zborojovka Brno sent the first batch of machine guns ZB vz.26 to China under the cartridge 8х57 mm Mauser. This weapon was intended for the National Revolutionary Army. Until 1939, when Czechoslovakia was occupied by Germany, Chinese armed forces were supplied with 30250 machine guns, which were actively used in the conflicts of the time. In addition, over time, the production of machine guns was launched in Chinese enterprises. Thus, by the beginning of the 1950s, the Chinese armed forces had a significant number of machine guns ZB cz.26. 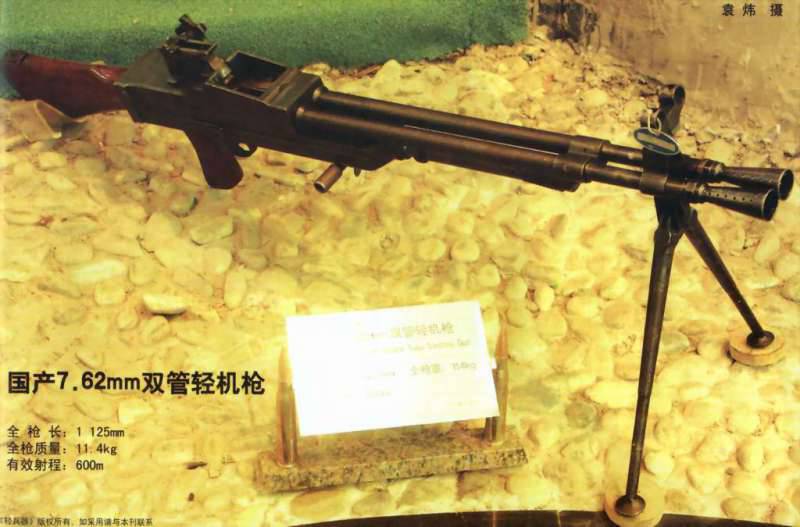 In the fifties, against the background of improved relations with the Soviet Union and the development of military-technical cooperation, the Chinese army began to develop new types of weapons and ammunition. In this regard, it was decided to modify part of the available small arms for the use of Soviet-style cartridges. In particular, Czechoslovak machine guns now had to use an intermediate cartridge 7,62x39 mm. Apparently, it was at this stage that it was decided to check the possibility of creating a manual machine gun with enhanced characteristics.

Perspective weapons with increased rate of fire should have been based on the processed units of the base machine gun. At the same time it should have two trunks and, accordingly, two automation units, partially connected with each other. It was assumed that such an architecture of weapons will give a double increase in the rate of fire and will accordingly affect the firepower and density of fire.

In the design of a promising machine gun was planned to make extensive use of existing parts, but some of the components had to be developed anew. At the same time, a part of the new parts consisted of slightly modified existing ones. In particular, some elements of the gas engine were reworked, and the receiver had to be created from scratch, but taking into account the design of the base weapon.

The main element of the design of the machine gun was the receiver of a new design. It was based on the base unit ZB vz.26, but it differed with a number of important features. She had twice the width, because she had to accommodate the increased details of automation. In the front wall of the box was provided for assembling nodes for two trunks. Under the breech of the trunks there was a small ledge in which the gas engine tube was fixed. In the top cover of the receiver there was a large window for installing two stores. In the lower surface there were windows for ejection of the sleeves, as well as a slot for the common handle of the valves.

According to reports, the double-barreled machine gun retained the automation based on the removal of powder gases and locking barrels by tilting the bolt. In this case, the mechanisms of basic weapons have undergone significant changes. At both trunks at some distance from the muzzle cuts there were venting tubes, with the help of a special assembly connected to a common tube, in which was located a piston with a long stroke. Inside the receiver was a common bolt carrier associated with the piston. She was responsible for moving the two bolts and locking the barrels. Locking was done by skewing their backs. The work of automation was also provided with one or two return springs.

The base machine gun ZB vz.26 had a firing mechanism that allowed firing single shots and bursts, as well as equipped with a fuse. Probably, the double-barreled sample retained this trigger, however some details could be improved due to the use of two trunks and valves. Nevertheless, it cannot be excluded that the efficiency of the firing mechanism was ensured by the corresponding changes in the bolt carrier.

In the respective mounts of the receiver, it was proposed to mount two barrels of caliber 7,62 mm. In connection with the rearmament of the army, a promising machine gun was supposed to use an intermediate cartridge 7,62x39 mm Soviet development. This barrel had a length of about 600 mm and was equipped with a conical muzzle brake. Cooling of the shafts was carried out with ambient air. Special devices for this, such as fins, were not provided.

Behind the muzzle brakes on the barrels of the machine gun mounted unit, which served as the basis for the flies and had a mount for a bipod. Apparently, when assembling an experienced machine gun, ready-made barrels removed from serial weapons were used, because of which the prototype received two flies at once in ring earpieces. Bipod, in turn, was standard for the base model machine gun.

For ammunition of a double-barreled machine gun, it was proposed to use detachable box-shaped magazines chambered for 7,62x39 mm, borrowed from a Soviet-made Kalashnikov assault rifle. Two such stores should be placed in the upper receiving window of the receiver and fixed with a common latch. With the help of the store's spring, the cartridges had to be lowered to the gate, which picked them up and sent them to the chamber. After the shot, the shotgun was ejected through a window at the bottom of the receiver.

As already mentioned, the experimental machine gun received original and unusual sights. Due to the use of ready-made trunks, a well-known sample had two flies, one per stem. Behind the receiving window of the stores there was a mechanical open sight, the design of which made it possible to point weapons without paying attention to the vertically located stores.

Wooden fittings for double-barreled weapons were borrowed unchanged from the base machine gun. A wooden butt was attached to the back of the receiver, and a pistol grip was provided on its lower surface.

According to available data, the resulting double-barreled machine gun had a total length of 1,125 m and weighed about 11,4 kg. Ready-to-use ammunition in the form of 60 cartridges in two stores added about 1,8 kg of weight. Thus, the innovations used led to some reduction in the length and increase in the weight of the weapon. For comparison, the base ZB vz.26 chambered for 8х57 mm Mauser had a length of 1168 mm and weighed 8,9 kg.

The exact characteristics of the experimental Chinese machine gun, unfortunately, are unknown. There is information about the sighting range at the level of 600 m. The exact rate of the sample is unknown, but the available data on the design and parameters of the base machine gun suggest that double-barreled weapons could do up to 1000 rounds per minute. At the same time, due to the use of relatively simple automation, shots were fired by volleys from two barrels at the same time.

The double-barreled machine gun of the Chinese design, created on the basis of the Czechoslovak design, had only one advantage over another weapon of its class - a higher rate of fire. Nevertheless, it had to pay for it with a noticeable increase in the weight of the weapon and less convenience in its operation. For example, it can be noted that simultaneous fire from two barrels led to an unacceptable increase in recoil momentum even from a relatively weak intermediate cartridge. Reverse shooting from the two barrels would allow to keep the return rates at an acceptable level, however, in such a case, the automation would have to be significantly altered and the borrowing of a relatively simple design would have to be abandoned.

Because of the interesting but dubious characteristics of the proposed double-barreled machine gun did not receive the approval of the army. It is known about the existence of at least one sample of such weapons, apparently, which was the prototype for testing. After all the necessary checks and refusal of the military to continue the work, an experienced machine gun was sent to storage. Currently, he is an exhibit at the Museum of the Chinese Militia in Tongzhou (Beijing).

Ctrl Enter
Noticed oshЫbku Highlight text and press. Ctrl + Enter
We are
Double-barreled pistol of American Arms Double Barrel Derringer and its variantsTwenty-barreled twin barreled revolver
8 comments
Information
Dear reader, to leave comments on the publication, you must to register.