February 3 2016
11
Lockheed F-94 Starfire became the first in stories All-weather jet interceptor fighter, which was adopted by the US Air Force. The aircraft was developed by designers from Lockheed based on the T-33 Shooting Star two-seater training aircraft as early as the end of the 1940-s. The interceptor was mass-produced; in total, 855 aircraft of this type were produced. The Americans used the F-94 Starfire during the Korean War, the car remained in service with the US Air Force until the 1959 year, the national guard - until the 1960 year.

The F-94 was designed to replace the North American F-82 Twin Mustang and F-61 Black Widow, which were obsolete at that time. The main purpose of the aircraft was to fight the newest Soviet Tu-4 bomber, which was the reverse engineering development of the American B-29 bomber "Super Fortress." Initially, Curtiss-Wright XF-87 Blackhawk claimed to be the first night fighter-interceptor in the US Air Force, but its characteristics did not suit the military, after which Air Force representatives turned to Lockheed. The F-94 interceptor was based on the TF-80C aircraft (later renamed the T-33A Shooting Star). It was a double trainer aircraft, one of the modifications of the F-80 Shooting Star. The nose of the car was lengthened, machine guns, an automated fire control system and a radar were installed. Since the alterations of the aircraft were not too complicated, the contract with Lockheed was signed at the beginning of 1949, and the first flight of the new interceptor took place on 16 on April 1949. The first copies under the designation YF-94 were unified on 75% with the F-80 and T-33A aircraft on a set of components.

The interceptor mounted the Hughes E-1 fire control system with AN / APG-33 radar. This radar was a modification of the radar AN / APG-3, which was designed to control the fire of the tail guns installed on the B-36 bomber. The radar was distinguished by a short target detection range and was intended for use directly in the final phase of intercepting the enemy aircraft, while the initial interceptor aircraft were aimed at the target using ground-based airspace control systems. 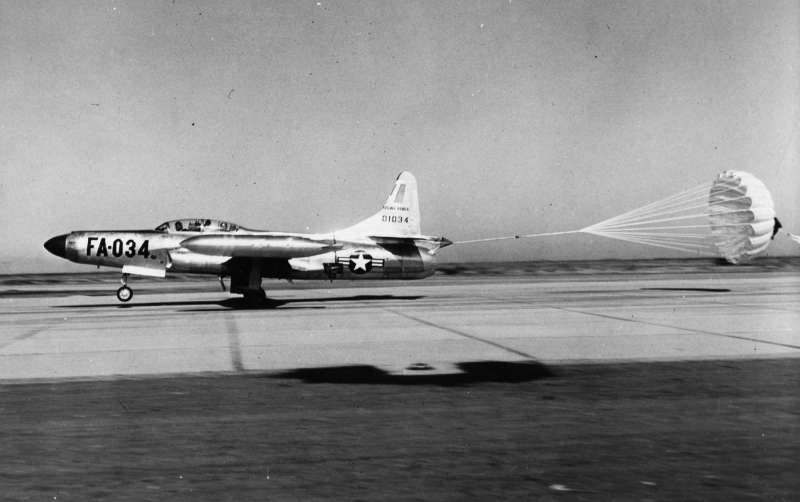 The weight gain of the aircraft due to the installation on board of additional electronic equipment required the use of a more powerful engine from the designers. For this reason, the standard J-33 turbojet engine, which was mounted on T-33A aircraft, was replaced by an Allison J33-A-33 engine with an afterburner chamber, which resulted in a decrease in the internal fuel supply of the vehicle. The F-94 interceptor became the first serial American jet aircraft to have an afterburner mode. The standard engine J33-A-33 was only 18 kN, with water injection it rose to 24 kN, and at the oversage it could reach 27 kN. Moreover, the afterburner system on this fighter-interceptor was still quite raw, there were many problems with ignition and stabilization of its operation during the flight.

The Lockheed F-94 fighter-interceptor was an all-metal aircraft with a semi-monocoque fuselage. Directly under the fuselage were installed brake pads. In the nose, detachable part of the aircraft was located electronic and oxygen equipment. The scanning antenna of the radar installed on the aircraft was covered with a rounded radome made of PCB. Under the radio equipment on the aircraft F-94A and F-94B were placed 4 machine gun M-3 caliber 12,7-mm with ammunition 300 ammunition on the barrel. In the middle part of the aircraft fuselage there was an airtight cockpit, immediately after it was located the fuselage fuel tank. The seats of the pilot and the radar operator were initially ejected.

The plane used the wing two-shaft construction. Hydraulic boosters were used in the aileron control system. On the left aileron trim was set. Electric-controlled landing shields were located between the aileron and the trimmer. Discharged fuel tanks could be suspended at the ends of the wing of the aircraft. The interceptor chassis was made tricycle with a nose wheel. The mechanism for cleaning the chassis and brakes on the main wheels - hydraulic. 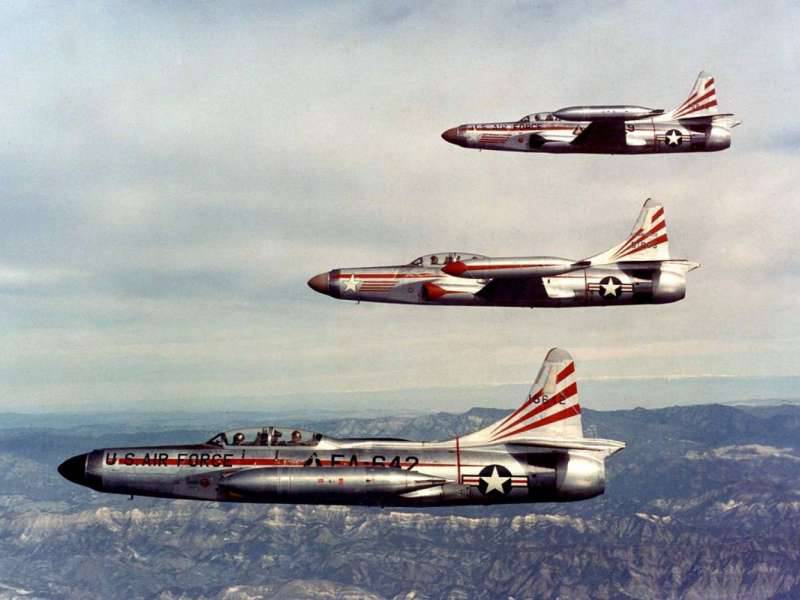 The F-94C Starfire interceptor fighter was armed only with unguided rockets - these were the 24 NUR “Mighty Mouse” or “Aromat”. The missiles were located in the nose of the aircraft around the radome antenna in four special stores, each on 6 missiles. Before the start of shooting, the launchers were closed with wings. In addition, more 24 missiles could be installed in two special containers placed on the wing consoles. Uncontrollable missiles were fired from wing containers in 0,25 seconds. During the flight, the bow of the container was covered with a fairing made of fiberglass. When launching missiles, this fairing collapsed. At the same time, the speed of the fighter-interceptor fell on 7-15 km / h. Instead of wing containers with NUR, it was possible to install similar containers on the plane, but with machine-gun armament.

The first serial modification of the interceptor was the F-94A, which was armed with only four 12,7-mm machine guns M3 Browning, located in the nose of the fuselage. Under the wings of the aircraft could be installed two fuel tanks with a capacity of 1204 liters each. These fuel tanks could be replaced with a kg bomb 454. A total of 109 fighters-interceptors of this modification were released. The F-94B version that followed it was not much different from its predecessor. A more sophisticated electronics appeared on the plane and the engine was modernized; in addition, the interceptor received a new instrumental landing system. In the F-94B version, 356 aircraft were assembled.

In March, the X-NUMX interceptors of the F-1951B went to war in Korea, where they were equipped with the 94-I, 4-I, 68-I and 319-I interceptor squadrons. These aircraft claimed several air victories won, including the first MiG-339 fighter shot down at night. At the same time, one F-15B aircraft was lost in battle, six Americans attributed to non-combat losses, two aircraft were reported missing during combat missions, three aircraft were lost as a result of accidents. One of the fighters was lost for the reason that it lowered the speed to 94 km / h, trying to intercept the Korean biplane Po-180. In total, during the war, the F-2B made 94 combat sorties, recording 4694 piston airplanes (5 Po-4 and one La 2) and three MiG-9 jet fighters into his account. 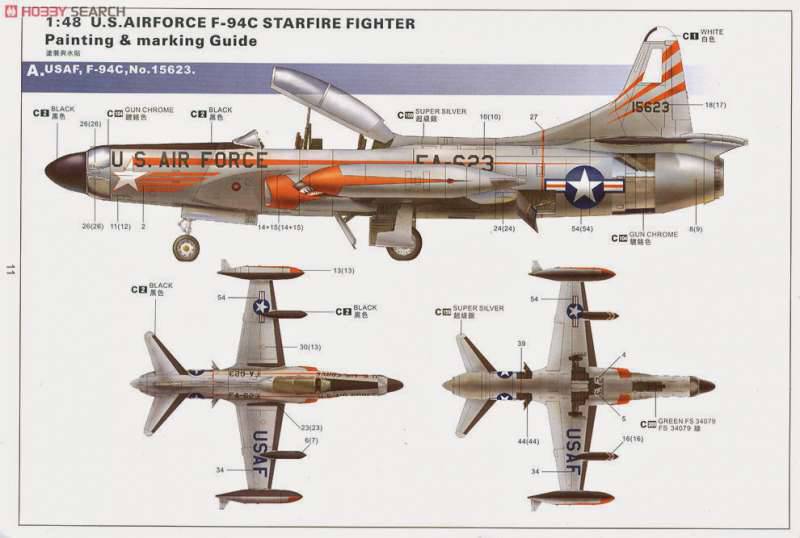 The biggest changes were made to the design of the F-94C interceptor, which became the most advanced aircraft of this type. It is worth noting that the F-94C was the only modification that was officially named Starfire, which later passed on to the entire F-94 interceptor family. Initially, this aircraft was designed as an F-97, but in the end it was decided to leave it with a modification of the F-94. At that time, the US Air Force was of little interest in this project, for this reason, Lockheed was building the aircraft on its own, converting two existing F-94B interceptors into YF-94C prototypes. To improve the characteristics of the aircraft, a new, thinner wing was created and the tail area was increased. The plane has a new engine. It was decided to replace the old J33 with a more powerful and perfect Pratt & Whitney J48, which was a licensed copy of the English Rolls-Royce Tay. By installing this engine, it was possible to significantly increase thrust: up to 28,8 kN in standard flight mode and up to 38,9 kN in afterburner mode. Among other things, the aircraft was equipped with the new Hughes E-5 fire control system and AN / APG-40 radar.

Trying to keep up with the times, the American designers decided to place unguided rockets on the plane. Instead of machine-gun armament, pure missile armament remained on the interceptor, which included 4 launchers around the nose of the aircraft, each of which contained 6 missiles. They used 70-mm FFAR (Folding-Fin Aircraft Rockets) unguided rockets. After launch, such a missile could accelerate to 880 speed m / s, and its destructive effect in case of hitting the target was comparable to the effect of hitting an 75-mm artillery projectile.

The interceptor of the F-94C interceptor with the target, like the aircraft of the two previous modifications, was carried out using ground-based radar stations until the target was captured by the on-board radar, approximately 40 kilometers away from the target. In order to train in the use of unguided missiles, special cloths of length 13,7 m and width 2,7 m were used, which were towed by B-45 TORNADO aircraft. To ensure the radar visibility of these panels, metal disks were specially sewn on them. During the 1954 training shots of the year, which were carried out in the Arizona desert, 27% was hit in a towed target. 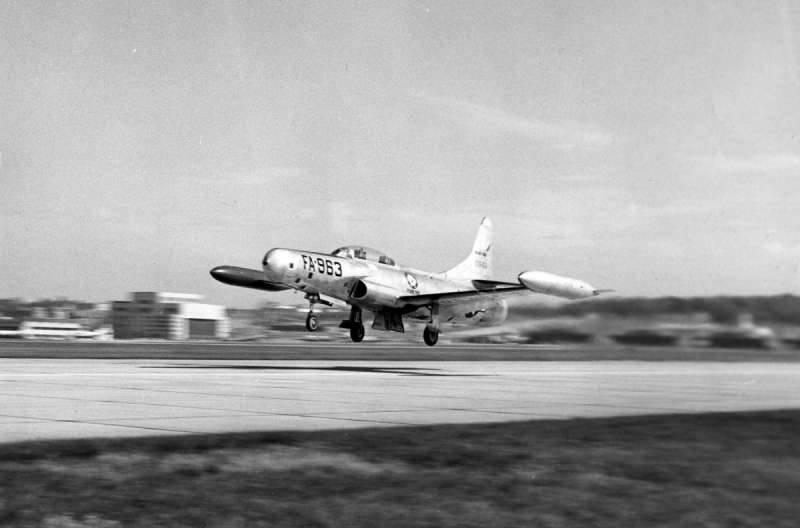 The first serial fighter-interceptor F-94C began to enter service with the 437 th fighter-interceptor squadron already in the 1951 year. When the Falcon GAR-I guided missiles appeared in the arsenal of the US air force, they began to be deployed on all available American interceptors, including Starfire, further increasing its combat effectiveness. The modification, which was armed with an air-to-air UR, received the designation DF-84C. In addition to the Falcon guided missiles, this aircraft could also be used to hang unmanaged Genies missiles equipped with a nuclear warhead.

As part of further modernization work, the F-94D model was also created, which was already a single-seat fighter-bomber with the possibility of using bombs and missiles on underwing suspension units. The aircraft was built in a single copy, but its production did not go further than the prototype. In the future, this only built aircraft was used in the US Air Force to test the 20-mm six-barreled automatic gun M61 Vulcan, which was designed for the F-104 Starfighter.

The first serial F-94C arrived the US Air Force in July 1951, until May 1954, the military was transferred 387 aircraft. The biggest problem that was discovered during the operation of the interceptor was mounted in the nose of the rocket, during the launch of which the flames and smoke blinded the pilots for a while. In addition, gases from the missiles released into the engine, which could cause the loss of a fighter. Over time, the underwing fuel tanks and suspension assemblies were added to the vehicle to install a container with 12 rockets. In most cases, the nasal missiles on the plane simply were not set, and weapons there were unguided rockets on the wing nodes of the suspension. Beginning with the 1959 year, when more advanced fighter-interceptor models began to arrive in the Air Force, the F-94C began to be removed from service. A year later, they began to be removed from the armament of units of the National Guard. 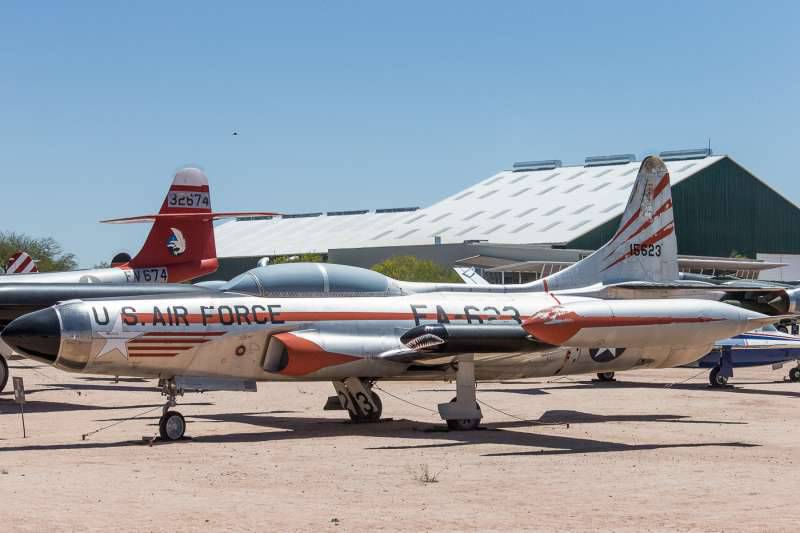 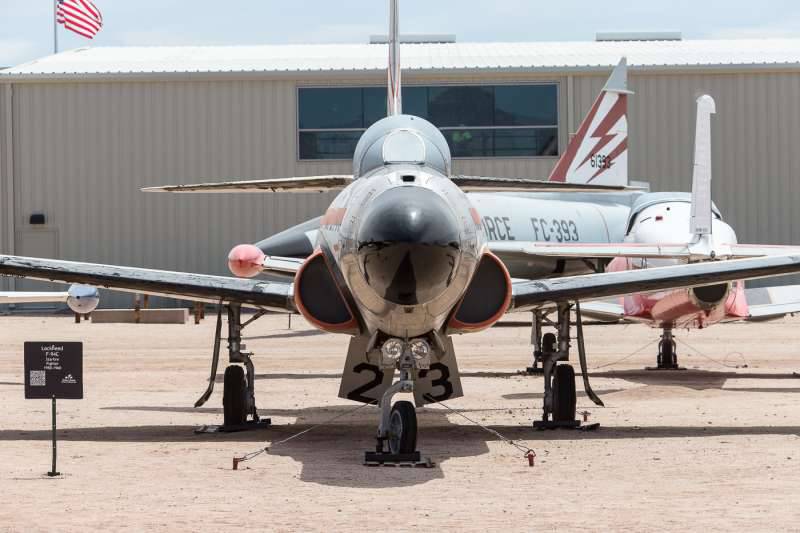 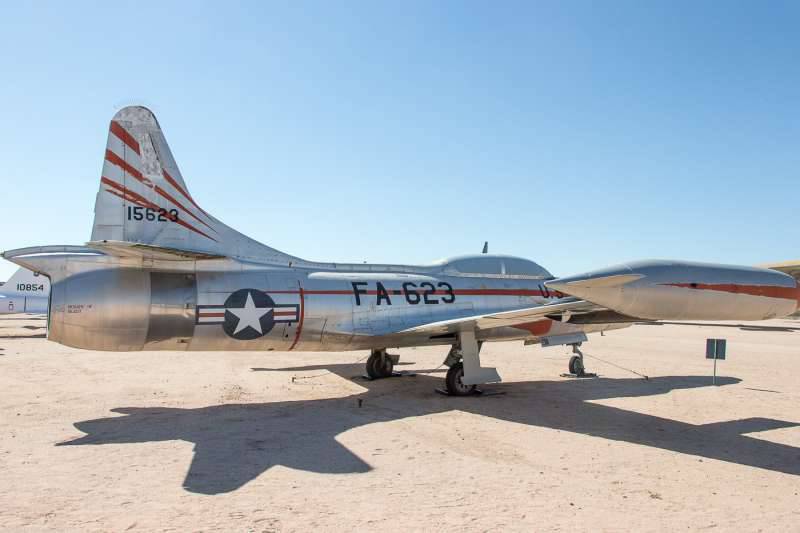 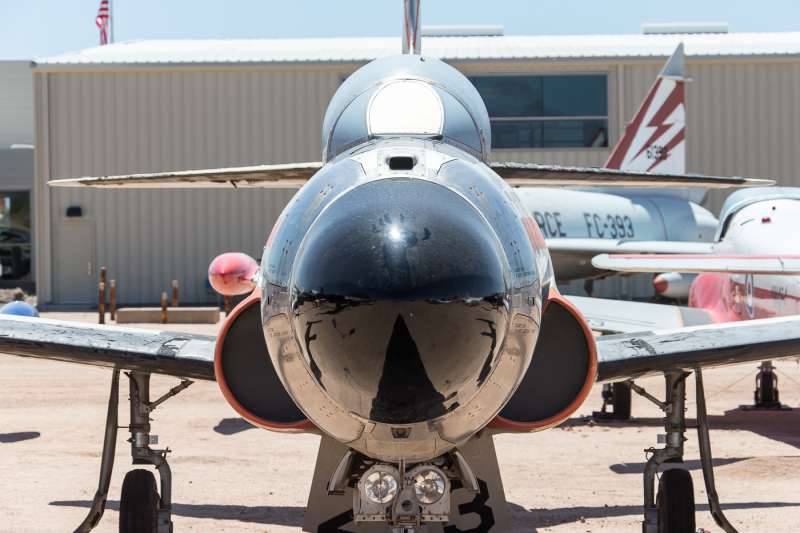 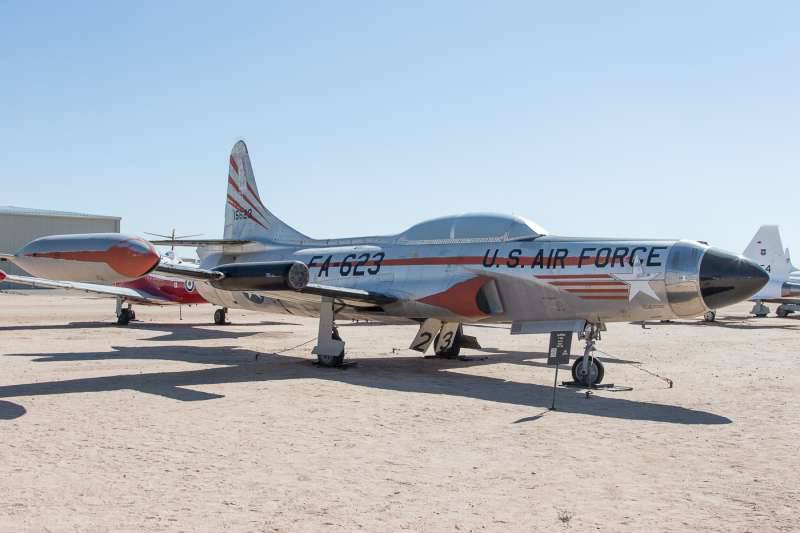 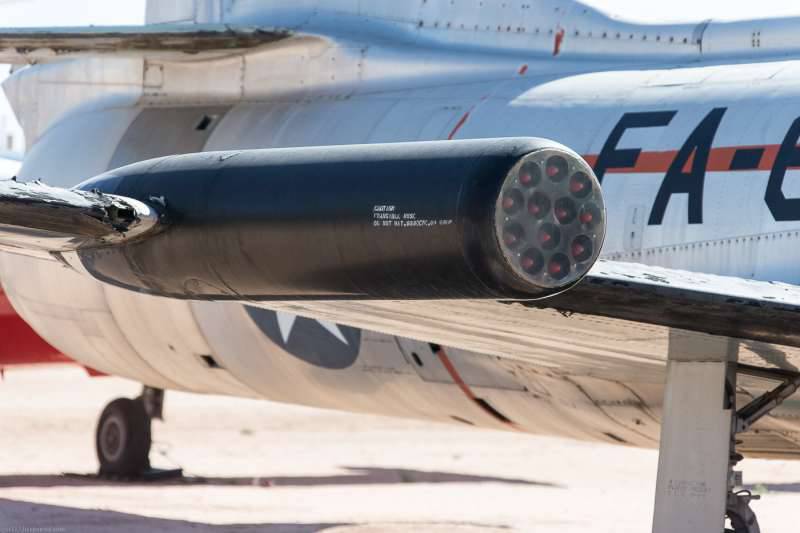 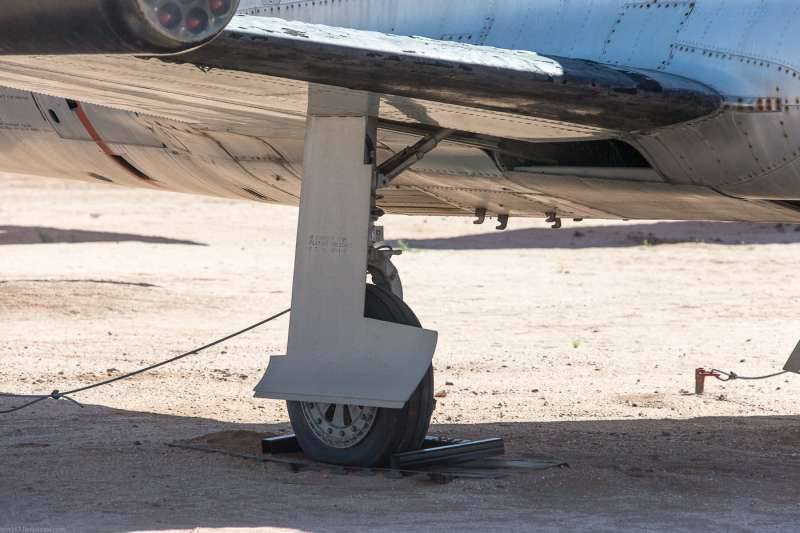 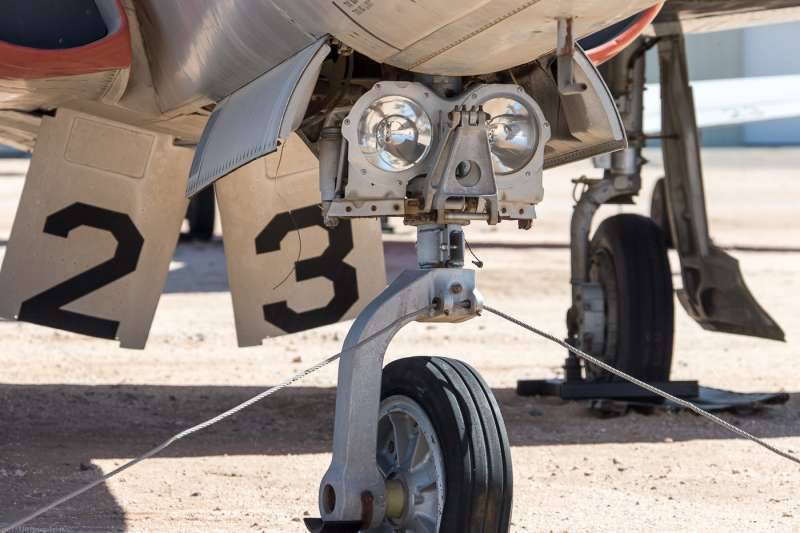 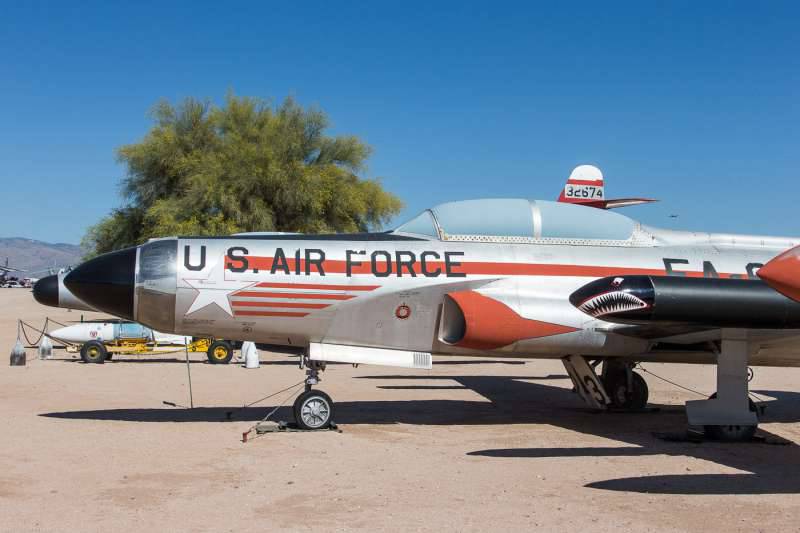 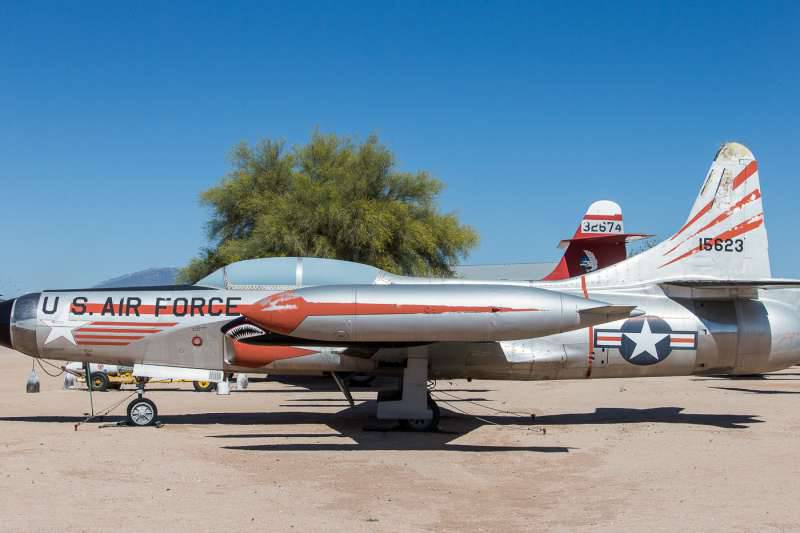 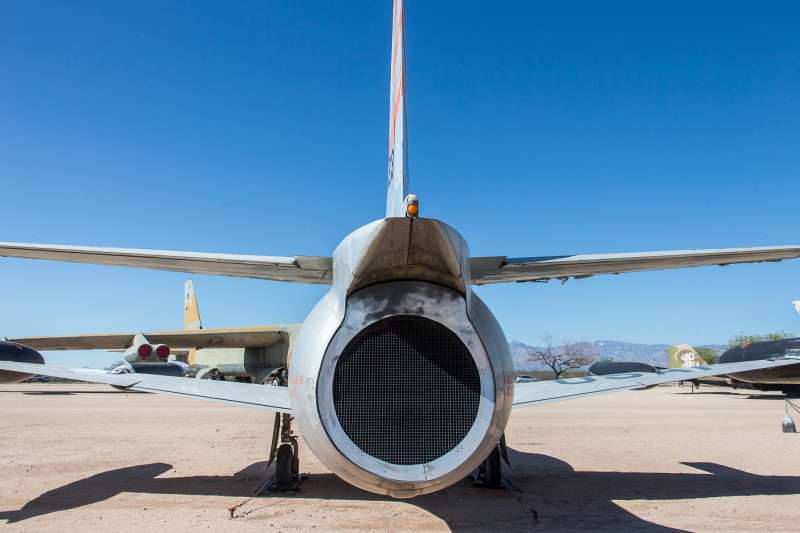