Walk, ragged, from the hryvnia and above, or what is behind the loud statements of Admiral Haiduk

February 2 2016
101
The Black Sea was once called more honest. Or more correctly. It was called Russian. For more than a thousand years, right up to the 17th century, this name flashed in historical documents of different countries. 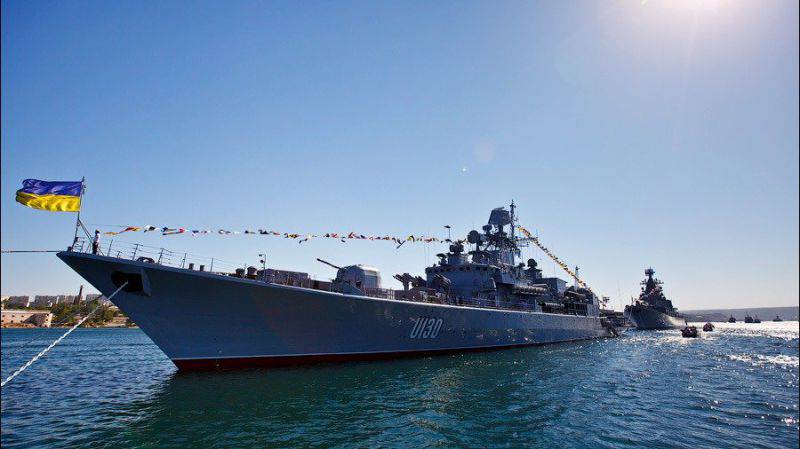 Then came the contenders for the ownership of this sea. Russia did not actively resist this. The point, seriously, is not in the title. The fact is, who actually owns the Black Sea region. But applicants wanted more. Applicants wanted to expel Russia from the region. And this desire was reinforced by very big blood. The blood of soldiers and sailors.

Ukraine today is among those who want it. Independence has engendered hatred for everything Russian. So, Russia today is forced to confront those whose ancestors lie with the Russians in the Crimean land. Whose ancestors tore their pharynx teeth to the Turks, the French, the British, the Germans. All invaders.

Today we are reviving our Black Sea fleet. It is difficult to revive. With a creak. We lived tears. But we are reviving. And, if you look historically, not for the first time. So for the success of this event for some reason there is confidence.

What is a fleet in terms of the military? I specifically focus on this.

For the majority of the inhabitants, the fleet is surface and submarine ships. This is a naval base. These are coastal batteries.

In fact, the modern fleet has long been not only ships. Let even the most modern. Fleet is a system. A system that can independently conduct any kind of hostilities. From submarine to space. And, if in terms of space is exaggerated, then very little.

Can anyone talk today about full navy without the marines? Without an air defense system? No sea aviation? Without EW? Without a full engineering service? You can write a lot. But it is easier to ask what the modern fleet does not have from what the army has?

In light of this, I would like to clarify the statements of the Ukrainian commander-in-chief, Admiral Haiduk, about the revival of the Ukrainian fleet in the near future. In the near, of course, in historical perspective.

So, from the admiral's statement, we see that in the plans of Kiev before 2020, to get from 2-x to 4-submarines. And also build at least 30 combat and auxiliary ships. Thus, to bring the number of the fleet of Ukraine almost to 70 units. I will not give the exact figure in 66 units. Just because the figure may vary depending on whether a machine gun is mounted on the next river boat or not.

However, Haiduk perfectly understands what a fleet is. Admiral, to whatever fleet he belongs to, man of the fleet. Sea man. That's why it speaks not only about ships. But also about the rest of the structure. First of all, about the coastal defense.

"Thanks to the creation of an integrated system, the basis of which is the division of the barrel and rocket artillery, the coastal strip in the Odessa and Nikolaev regions is reliably protected."

Simply put, Ukrainian naval commanders reinforce the coastline with artillery systems and volley fire systems. The task of these systems is to destroy a possible naval landing on the coast. At first glance - quite normal desire. Landing, especially marines, it is always very serious.

But what kind of admiral will he send his elite for shells without preliminary preparation of the coast? Russian will not be sent. And others too. A Marine is too expensive for the fleet. Too. It's easier to demolish all these batteries with air strikes. Yes, and rocket ship will help.

The Ukrainian Marines today actually have a very distant relation to the normal Marines. Today these are simple parts from the ATO area. With appropriate training and appropriate personnel.

Aviation of the Navy of Ukraine? Alas, this component is almost nonexistent. For all the years of independence of the country, not a single aircraft or helicopter was built for the Navy. All that remains today is the legacy of the "damned past" from the USSR. And the past is aging by leaps and bounds. I will not talk about moral aging. It's just about destruction. Sea water for aircraft is not a very pleasant neighborhood. As well as the lack of proper care and repair.

Air defense? The same legacy of the "cursed past." Therefore, we will not talk about him seriously.

And now about what the Ukrainian admirals are really planning. That in a few years will confront the Russian Black Sea Fleet.

Today in the Russian Black Sea Fleet is 43 warship. Different in age and class. Most of them are outdated and unable to conduct real combat operations in other seas. But quite capable of fighting in the Black Sea. In total, the Black Sea Fleet has approximately 2500 ships.

Ukrainian fleet: 3 warships, 5 boats and 1 minesweeper. Loud names no longer scare anyone. A very recent example has shown who is who in the Black Sea. I mean the meeting of our boats with the Ukrainian when transporting oil-producing platforms.

The surface fleet of Ukraine today cannot be replenished with at least something serious. The only more or less modern frigate that could theoretically be completed is frozen. And its readiness is only 37%. I mean the frigate of the project 58250 "Vladimir the Great".

The project is quite interesting. But. Bookmark took place in 2010 year (officially in 2011). And in 2015, the project is completely mothballed. And the re-entry, according to experts, is no longer possible. Another cruiser "Ukraine", nothing more. But it was planned for 2026 to create a powerful grouping of such ships.

What is the priority today? Oddly enough, boats. For more modern Ukraine is not capable. And while serious rocket boats also can not produce. No weapons. So, landing boats and boats of artillery support today a ceiling.

And the submarine fleet? Where Ukraine is going to take submarines? Build? The possibility of such construction showed repair "Zaporizhia".

This question interests many. Especially in Ukraine. And no one wants to give an answer. So, probably, I will have to.

The fact is that the admirals of Ukraine are pinning their hopes on the "modern" German submarines of the 209 project (type 209). These boats are equipped with such great maritime powers as Turkey or Greece. Boats "modern". Delivered to replace the boats of the 2 world war since 1971.

It is Turkish boats that will most likely be transferred to Ukraine. The fact is that the Turks write off this trash. Operation becomes too expensive. A combat capabilities weak.

Thus, behind the loud statements of the President of Ukraine, the Commander-in-Chief of the Navy, is zilch. The naval version of land battalions numbering 100-200 people. A physical loss of the fleet has already occurred. Legal, even if everything that the admirals conceived will come true, will occur before the 2025 year. No matter how much you say "fleet", ships will not increase.

However, all these calculations in no way remove from us the task of strengthening our Black Sea Fleet. The fleet must be such that no one has any desire to try it "on teeth". To in the coastal cities never appeared new military memorials. That the Russian seaman was perceived all over the world as a worthy descendant of the heroic sailors of the Russian Empire and the Soviet Union. And we will do it.

Ctrl Enter
Noticed oshЫbku Highlight text and press. Ctrl + Enter
We are
One less admiral? .. Poroshenko dismissed the commander of the naval forces of Ukraine Sergey HaidukInternational Arms Market: New Applicants for Leadership
101 comment
Information
Dear reader, to leave comments on the publication, you must to register.