February 2 2016
46
As part of the program for the military development of the Arctic, there was a proposal to strengthen the management system of the new element. A few days ago it became known that the Ministry of Defense was asked to modernize one of the existing nuclear icebreakers by installing special military equipment on it. After this, the ship will be able to become a new command post, which will participate in the management of the Arctic grouping of the armed forces.


Stanislav Golovinski, Deputy General Director of Rosatomflot, told about plans to re-equip the existing nuclear icebreaker 28 in January. According to the official, the state corporation Rosatom and Rosatomflot, which is part of it, suggested that the Ministry of Defense consider the possibility of creating a new mobile command post for the Arctic. The basis for this object should be the atomic icebreaker "Soviet Union".

During his recent performance in the Russian Geographical Society, S. Golovinsky noted that the Soviet Union icebreaker, owned by Rosatomflot, was decommissioned as early as 2006. When carrying out repairs and upgrades, the vessel will be able to return to service and accomplish the assigned tasks for a long time. According to the deputy general director of the operator, the restoration will extend the life of the icebreaker by two decades. 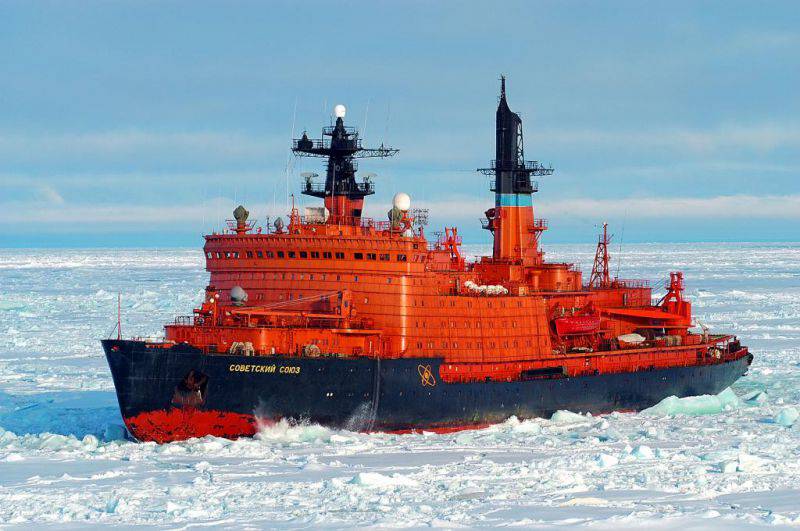 The atomic icebreaker "Soviet Union" was built according to the project 10520 "Arctic" and became the fourth vessel of its series. The icebreaker was launched in 1986 and became part of the nuclear fleet three years later. According to some reports, the draft of new vessels was developed taking into account possible military applications. For this, the design provides for various equipment for the installation of weapons and related equipment.

From the middle of the last decade, the icebreaker was preparing for repairs and upgrades, but such work took too much time. Despite the supply of new components and assemblies in 2007-2008, in 2010, the Soviet Union was withdrawn from the fleet, after which the long process of determining its future fate began. For several years the ship was in Murmansk.

Later it was decided to restore the icebreaker and return it to the service. It was reported that the full implementation of the project of restoration and modernization is associated with some difficulties, primarily with the lack of a real customer of such works. In the summer of 2014, there were official announcements about the start of work that will take several years. It was assumed that the icebreaker will be able to return to the sea in 2016-17.

Probably already during the last works, it was decided to consider the option of developing a project to upgrade an existing icebreaker in order to create a promising command post. In this case, the "Soviet Union" will be able to get a number of new equipment for communication, control and data processing, which will allow the crew to coordinate the actions of the various forces of the Arctic group.

The state of the project, for obvious reasons, is still unknown. Probably, only the most general moments were worked out and the principal possibility of the planned modernization of the icebreaker was revealed. In this case, the final decision will have to take the leadership of the Ministry of Defense. If the military department decides to rebuild the ship, then within the next few years a new mobile command center will appear in the fleet. Otherwise, the “Soviet Union” will probably return to its former service after restoration.

The icebreaker Sovetsky Soyuz has a displacement of about 23 thousand tons, a length of 150 m, a width of 30 m and a normal draft of about 10 m. The icebreakers of the Arctic project were equipped with two atomic reactors of 171 MW. Used electric motors allow the icebreaker to reach speeds up to 20 nodes. The range is limited only by stocks of provisions, etc. resources. The autonomy of the vessel reaches 7 months. The crew includes a 100 man.

From the beginning of the seventies to the end of the two thousandths, six icebreakers of project 10520 were built and commissioned: the Arctic, Siberia, Russia, the Soviet Union, Yamal and 50 years of Victory. Only the last two vessels of the series are currently in operation, one more (the “Soviet Union”) is under reconstruction. Other icebreakers are awaiting disposal. As follows from the latter News, the fourth icebreaker of the project in the foreseeable future may return to service, possibly already in a new quality. Such modernization will not only save the unique vessel, but also provide the Arctic grouping of the armed forces with modern means of communication and control.

Ctrl Enter
Noticed oshЫbku Highlight text and press. Ctrl + Enter
We are
How many icebreakers do Russia need?Laid the keel of the first Soviet-era icebreaker with a capacity of 25 megawatts
46 comments
Information
Dear reader, to leave comments on the publication, you must to register.