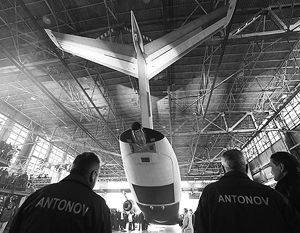 Known around the world aircraft company "Antonov", even in Soviet times, created a lot of unique aircraft, is eliminated. And its assets are transferred to Ukroboronprom. The reason may be not only in the maniacal desire of the Ukrainian authorities to get rid of the well-known brand associated with Russia.


The world-famous Ukrainian aircraft company Antonov, which had previously produced the world's largest An-124 Ruslan and An-225 Mriya aircraft, ceases to exist.

“Americans, waving promises and green pieces of paper, want to reorient this enterprise, in fact, having killed the school of the Ukrainian aircraft industry”

According to the decision of the Ukrainian government, the concern is liquidated, and the enterprises that were part of it are transferred to Ukroboronprom. Kiev made such a decision “due to the absence of participants”, since all three enterprises that actually constituted the concern went out of its structure last year and were included in the concern “Ukroboronprom”, the press service of the Ministry of Economic Development and Trade of Ukraine explained .
The concern included the Antonov enterprise itself, as well as the Kharkov State aviation manufacturing enterprise and state enterprise "Plant 410 GA" in Kiev. On September 14, 2015, the Antonov concern was already withdrawn from the Russian-Ukrainian joint venture UAC-Antonov, which was developing a number of new aircraft.

Antonov is the name of the great Soviet aircraft designer, under whose leadership the Aviation Experimental Design Bureau was established in May 1946 at the Novosibirsk Aviation Plant.

“This is a global brand, which flourished in the Soviet period, primarily thanks to transport aircraft. A whole series of unique aircraft was created. An-2 was created in Novosibirsk, and only after transferring the battery to Kiev, he acquired a Ukrainian residence permit. The main success of Antonov in passenger aircraft construction is the An-24 / 26, which is still in use in Russia, and, in fact, no replacement was found for this aircraft, ”says Avia.ru portal editor Roman Gusarov. An-24 - an aircraft for flying over distances up to 2000 km, it was produced by 20 years - from 1959 to 1979. On 1 January 2006 of the year, the State Register of Civil Aircraft of the Russian Federation included 207 aircraft of this type, of which 121 was operated. An-24 installed 13 monuments in Russia and one in Uzbekistan.

In fact, we are not talking about the liquidation of the enterprises themselves, which are part of the Antonov concern. But the aircraft factories now come under the control of the state-owned company Ukroboronprom, losing their historical brand, its relationship with Soviet and Russian aviation.

Such reformatting of the group can have several reasons. First, merging into a large holding can help cut costs. In fact, the company no longer exists, it is a legal registration in accordance with the real state of affairs, which will reduce costs and remove the “managerial superstructure”, says First Vice-President of the Russian Union of Engineers Ivan Andrievsky.
On the other hand, it will become easier for the Ukrainian state to control the work of aircraft factories, for example, in terms of suppressing cooperation with Russia. Another reason, according to Andrievsky, is the maniacal desire of the Ukrainian authorities to get rid of the Soviet legacy. “After all, Antonov is a Soviet brand that is firmly associated with Russia. In addition, the company has very close ties with Russian companies, some 90% models were assembled at Russian enterprises, ”he says.

Roman Gusarov sees another goal in liquidating the Antonov concern and transferring assets to Ukroboronprom. “It is clear that no one in the West will buy products that were made by aircraft factories belonging to the Antonov concern. For Ukraine itself, two aircraft plants are a lot, and there is no money for building airplanes and buying them for the domestic market. It means that these plants will be reoriented towards the production of something else, and the design office, without sales, will gradually degrade, ”Gusarov believes.

The last 25 years of export orders for An planes have been sporadic. And the announced plans - to reach the annual production of aircraft up to 50 units per year, and “then to reach the level of production of the USSR 200 machines per year” in cooperation with the West — look like pure fiction.

According to Gusarov, the Antonov concern faces the same fate as the Zaporozhye Motor Sich, where aircraft and helicopter engines are manufactured. Information appeared in the European press that the United States is going to modernize this plant in order to produce anti-tank missiles at its base, to repair and modernize the weapons of the Ukrainian army. This was reported by the French resource Intelligence online. The next day, Motor Sich stated that they did not hold talks with US representatives on the establishment of a defense holding company based on their enterprises, the press service said on Thursday.

“The goal is obvious. Today in Ukraine there is a unique high-tech production of aircraft engines, this is a field of technology that a few countries have, and the Americans, waving promises and green pieces of paper, want to reorient this enterprise, in fact, having killed the local aircraft building school, ”says Gusarov.

“Until recently, all Russian helicopters, which are sold worldwide in large quantities, flew only on Ukrainian engines. That is, until recently, this plant earned currency for its country, and soon the Ukrainian budget will buy anti-tank missiles at the plant, and with money that will be taken from the United States. And the Americans will be the shareholders of this plant, ”the expert explains. In fact, Ukrainians will buy missiles from the Americans and they will still have to.

Until now, the Antonov battery existed thanks to Russia. “Still, the resources of the aircraft operating in Russia were extended, the aircraft were modernized, new machines were created. An-140 developed together with Russia, built them in Voronezh, and Ukrainian Antonov received author's deductions from each aircraft. Ukrainian factories also participated in the production. The project to create the An-70, which stretched over a decade, was also funded by Russia. Now all this will not happen. Antonova will no longer receive any proceeds from Russia from sales, which means that it will be doomed to gradual extinction, personnel will be washed out, ”Roman Gusarov believes.

Even the latest export sales in 2014 and 2015 from Antonov were only due to Russian money. For example, last year, Antonov placed one An-158 in Cuba and one An-148 in the DPRK under contracts signed back in 2013 and 2011, and the Russian leasing company Ilyushin Finance Co. financed both deals. Moreover, Cuba will continue to receive the ordered An-158, and the Russian leasing company will continue to pay. That is, the prospects for the export of An aircraft are still dependent on Russian partners.

Neither Europe nor the United States need Ukrainian planes, and they are unlikely to want to finance their sales to third countries.

“No one in the world, except Russia, needed Ukraine as an aviation power. Russia held on to it for a long time, there were many ideas for unification, deep integration. But, unfortunately, in Ukraine everyone lived in one day, everyone wanted to receive more dividends for themselves personally. In no case do not give anything "Moskal". As a result, now they give Americans and Europeans for nothing. It's a shame because the entire production base, aviation school was created by the Soviet Union, all together and for many years, ”concludes Gusarov.

The prospects for Anov in foreign markets were buried back in 2013 by the European giant Airbus. The former prime minister of Ukraine, Mykola Azarov, said at the time that the Airbus management had explicitly stated that they would not allow Antonov’s planes to the world markets. NATO also refused Ukrainian aircraft.

“Thus, the An brand is now practically worthless. It is not interesting in the post-Soviet space, since Russia, as a key potential customer, refused to buy Anov, and it cannot enter the world markets due to the opposition from Airbus. Of course, Antonov also had its own developments, and the engineering and technical base that had been laid back in the Soviet era allowed us to count on the development of the enterprise even without Russia's participation. However, it was beyond the power of the Ukrainian authorities to get Antonov out of the crisis. As a result, the enterprise and the brand itself may be lost, ”summarizes Andrievsky.

Ctrl Enter
Noticed oshЫbku Highlight text and press. Ctrl + Enter
We are
"Ruslan" can again go to the series ...An-124 - the resumption of Ukrainian-Russian cooperation !?
52 comments
Information
Dear reader, to leave comments on the publication, you must to register.