January 30 2016
58
Defense News reports that the Turkish government has stated that a large number of countries, which it describes as allies, have expressed interest in purchasing tank Altai 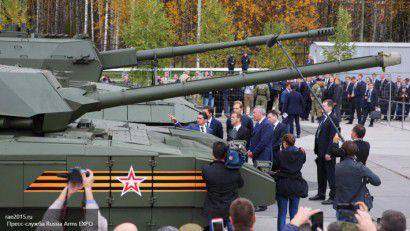 Of the latest models of armored vehicles, created from scratch, you can call the South Korean X2, although it has German roots, and the Russian “Armatu”, but we have the best armored traditions in the world
The head of the military-industrial complex of Turkey, Ismail Demir, said in the Turkish parliament that Pakistan and several friendly Gulf countries are considering the option of purchasing Altai as the “main” option, and this primarily refers to the contract with Saudi Arabia.

Andrei Frolov, editor-in-chief of the Arms Export magazine, argues that the option of purchasing prospective or developed weapons is quite traditional for international military contracts - here we can recall the case of the development of our Pantsir-1С air defense system, which was created for the United Arab Emirates contract money.

“Therefore, it often happens that there is a starting customer who pays for some work and is the first recipient of this product. Today, the Turks have two working samples of the Altai tank, which they are now actively promoting, but the viability of this undertaking raises great doubts, ”says Frolov.

According to Frolov, no one will get involved with a tank that is not mass-produced and not purchased by the local army.

“Moreover, there is an actual counterpart of Altai - the South Korean tank KHNUMX, which turned out to be very expensive, which even the South Korean army could afford to build only 2 units. At the same time, the level of South Korean industry cannot be compared with Turkish, and Altai was built with the help of Koreans, ”Frolov said.

In addition, we must not forget that the Saudis offer military contracts to everyone and everywhere the same amount of 10 billion dollars appears, but potential contractors are constantly changing, and not a single contract has yet been concluded, which is especially important, given that the fact that Saudi Arabia paid 2015 billion dollars in 100 for covering the deficit of its budget due to low oil prices, and this amount will double in 2016 year.

"The Arab monarchies of the Gulf, due to the fact that they are now taking place in the oil market, will obviously lose their appetites, but weaponone way or another, there will be money. Besides, if you take a tank history, Saudi Arabia decided to deploy another armored brigade, they also need tanks to compensate for the losses and to replace obsolete models of armored vehicles like AMX-30 and M-60, so this issue will be resolved, ”summarizes Frolov.

According to Frolov, the Saudi contract for 200 tanks is a very large amount, so the Saudis will bargain with it and demand concessions from specific countries.

“This is primarily the United States, moreover, the Abrams are already in service with Riyadh, although the experience of the war in Yemen has shown that this is a very uneconomic tank even for Saudi Arabia. There are also Frenchmen who want to resume production of the Leclerc tank for the needs of Saudi Arabia, and before that they are ready to lease out armored vehicles from their own "stocks". We can not forget about the Germans with the "Leopard-2" - such conversations have been going on for a long time, but so far the German government does not allow certain types of weapons to be sold to the Saudis. Also here there were Turks and there are certain prospects for the Chinese and Koreans. Our T-90 has no chances, although it showed the best results on Saudi tests, which, again, shows that Riyadh’s choice will be made not by the quality of a specific product, but by political expediency, ”states Frolov.

Another question is that all this is just talk - the Saudis are now pursuing a policy of “distributing” countries in order to beat out any preferences for most of the supply points to the needs of their defense budget.

“The main problem of Altai in the light of the Saudi contract is not even its promising fighting qualities, but the very possibility of the Turkish industry to build it. Indeed, from the latest models of armored vehicles created from scratch, the South Korean X2 can be called, although it has German roots, the Russian Armata, but we have the best armored traditions in the world and partly the Japanese tank Mitsubishi, and all very expensive “things in themselves” are for internal use, ”concludes Frolov.

So, as if the Turks did not advertise their “Altai” - the only thing they can do is the average in their combat capabilities and a very expensive tank (most of the components are designed and purchased abroad), which they have “for poverty” in which limited quantities purchased by the Saudis.

Ctrl Enter
Noticed oshЫbku Highlight text and press. Ctrl + Enter
We are
Armored vehicles of Ukraine: results, potential, prospects ...Is the "old" well forgotten to become the "new"? Part-2. At the call of honor and duty
58 comments
Information
Dear reader, to leave comments on the publication, you must to register.