A new stage of testing the armored car Mercedes-Benz LAPV 6.1 (Germany) has begun

January 28 2016
36
The German defense industry continues to work on the LAPV (Light Armored Patrol Vehicle) armored vehicle family project. As follows from recent reports of foreign media, currently the next armored car of this family is being tested in the Arctic. The ground for such tests was one of the Swedish testing grounds, where a prototype of a promising armored car was delivered.


The current test passes armored car type LAPV 6.1 (also found an alternative designation LAPV II). This project was created by the order of the German military department, and its goal is to supply several dozen new vehicles that differ from the existing technology in a number of enhanced features. In particular, LAPV 6.1 should differ from the previous equipment of the family with a higher level of mine protection. In addition, in order to improve mobility, the car receives an updated chassis, as before, based on an existing commercial vehicle. 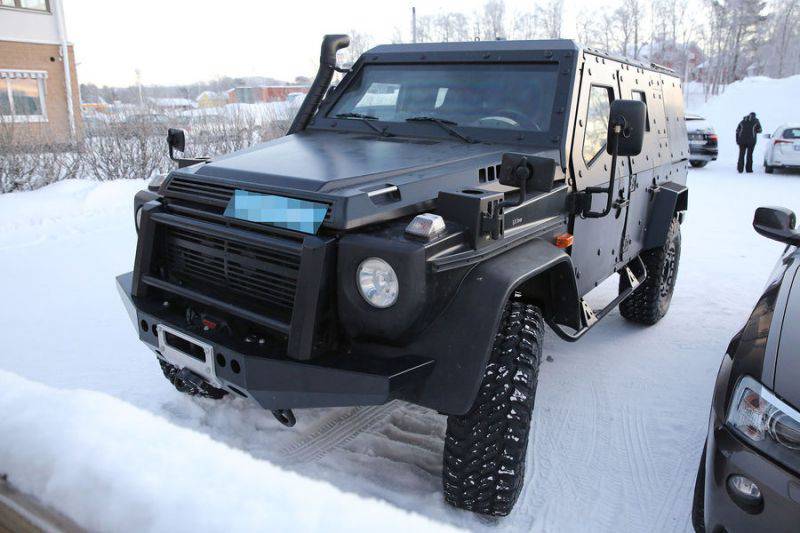 The LAPV program is implemented by Daimler together with ACS Armored Car Systems GmbH. In accordance with the existing contract, Daimler is responsible for the creation of the chassis and the overall coordination of the project, and ACS Armored Car Systems is entrusted with the development of an armored hull. Ready-made cars are offered on the market under the brand of Mercedes-Benz. The approach used to create the project is applied from the very beginning of the work and has already proven itself well. The cooperation of large and small firms has already led to the creation of serial armored vehicles supplied to various customers.

According to reports, the project LAPV 6.1 was built on the basis of the existing car chassis. The Mercedes-Benz G300 CDI was taken as the basis for the armored car. In this case, the chassis for the armored car has noticeable differences from the basic design. To enhance its performance, some elements of the undercarriage of the Unimog family of trucks and the three-axle vehicle G63 AMG are used. The base chassis suspension was also enhanced. It is assumed that such modifications of the chassis will compensate for the increase in weight of the structure.

The LAPV 6.1 armored vehicle, like the G300 CDI chassis, is equipped with a OM642DE30LA hp diesel engine of 184 type. The engine mates an automatic transmission W5A 580 with a five-speed gearbox. The two-axle wheeled chassis was reinforced by the use of two spring dampers on each wheel. The wheels have a diameter of 37 inches and are equipped with a centralized pressure control system. 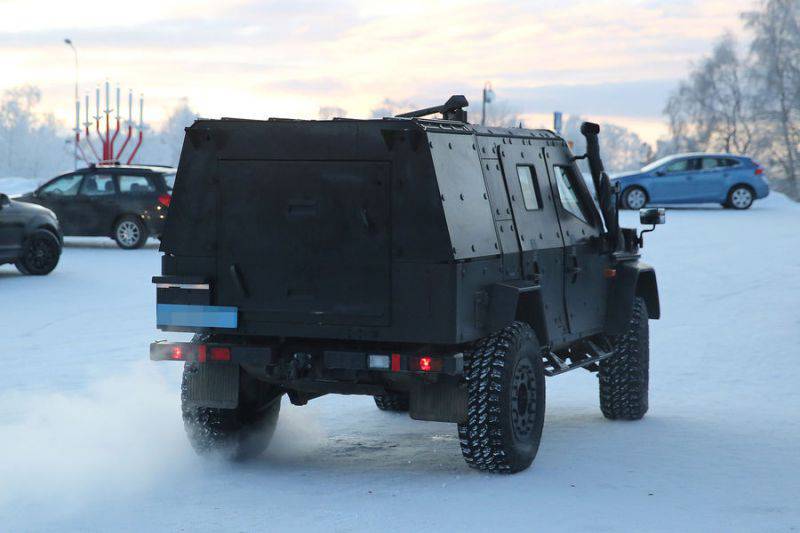 The base chassis is mounted armored corps, developed by ACS Armored Car Systems for the previous armored family. Due to the absence of significant changes in the technical task, it was decided to use the existing case with minor modifications. The body of the LAPV 6.1 machine has a classic layout for such equipment with a front hood and a large habitable volume in the middle and stern parts. The case has an original, but ambiguous feature. Thus, in the basic configuration of an armored vehicle, the engine has no protection and is closed only with a light hood. At the same time, motor protection can be installed on request. All other units of the hull are fully armored and protect the crew from shelling or explosions. There is no exact information about the reservation architecture, but the characteristic appearance suggests the use of combined reservation.

According to reports, the armored hull meets the 2 level of protection standard STANAG 4569, which allows the crew to save from armor-piercing and incendiary bullets of intermediate cartridges of 7,62 caliber mm. Mine protection is declared at the same standard 2a. In this case, the car must protect the crew from undermining 6 kg of TNT under the wheel. According to reports, in the current tests used armored car, not equipped with full protection. On the outer panels of the prototype there are signs indicating that it is not equipped with armor, but imitation products.

For boarding the car, four side doors are provided, opening access to two rows of seats. Inside the hull provides five seats, including the driver's seat. In the front row there are two chairs, three more are located behind them. The fighters, located on the back row, have access to the sunroof, which can be equipped with weapons, including remote-controlled. To monitor the road and the environment, a set of bulletproof glass is used. The main element of the glazing is a large windshield. Windows in doors of various shapes were used for the review of side hemispheres: the front ones are equipped with larger glasses of complex shape, and the rear ones - with small rectangular glasses. The stern of the hull is given under the cargo compartment A door is provided for access in the feed sheet. 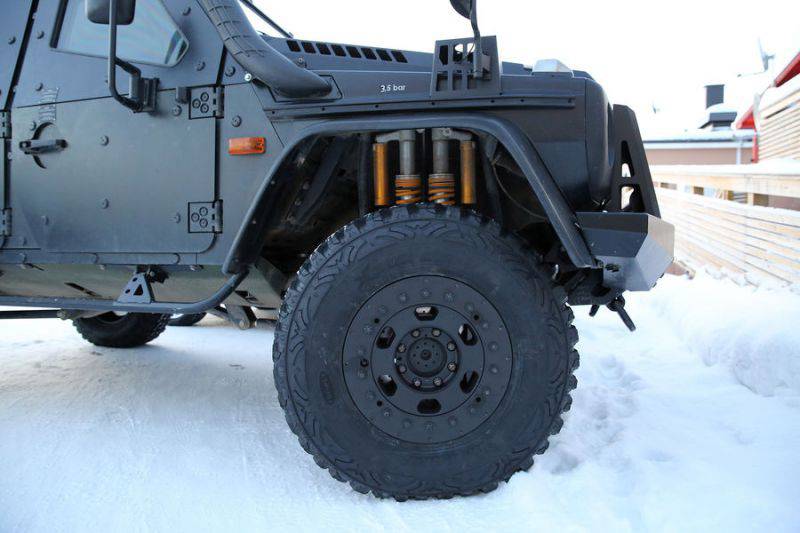 Development of the project LAPV 6.1 started in January last year after the appearance of the order from the Ministry of Defense. In accordance with this document, before the end of 2017, Daimler and ACS Armored Car Systems must supply armored vehicles of the LAPV 35 and 5.4 type LAPV 49 vehicles to the customer 6.1. Armored vehicles of the first type were developed several years ago and are already being mass-produced, while the latter were developed only last year and are now being tested.

New armored car LAPV 6.1 is the second car of its family. The first sample, known under the designations LAPV I or LAPV 5.4 (in the second version of the designation indicates the combat mass of the machine), was developed in the middle of the last decade. In 2008, this car was presented to the competition of the armed forces of Germany. The competition did not end with the victory of one of the participants, but it helped the military to make a choice. After the completion of competitive tests, in 2010-14, the German Defense Ministry acquired 127 machines LAPV 5.4, which received a new army designation Enok and were transferred to army and military police units.

In 2014, the first export contract for the supply of LAPV 5.4 machines was completed. The first foreign customer of this technology was Switzerland, which received about a dozen armored cars. 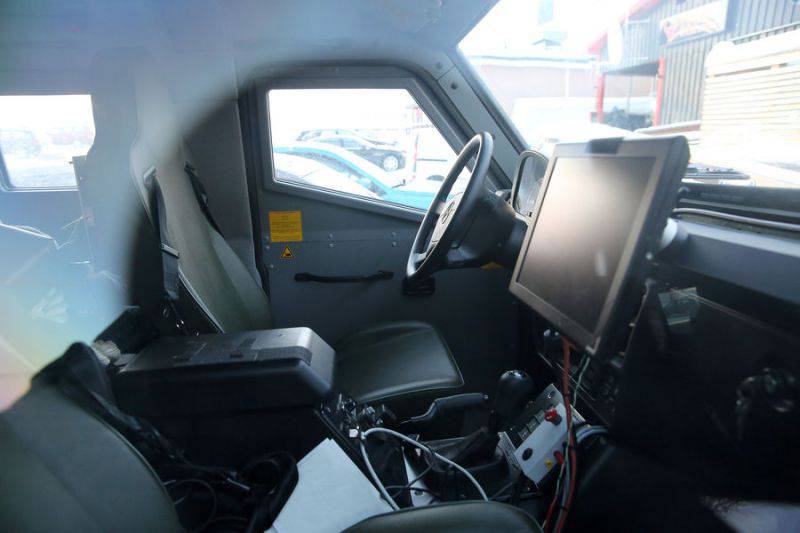 The development of the LAPV project was continued in accordance with the January 2015 contract. In carrying out this order, two German companies must supply several dozen existing vehicles, as well as develop a new armored car and begin its mass production. According to the latest foreign press reports, the LAPV 6.1 prototype machine has now completed part of the tests at German test sites and went to Sweden to check on snowy slopes at low temperatures. Completion of this test phase will allow further work on the new armored car, as well as bring about the beginning of its mass production.

In accordance with the existing contract, the delivery of armored cars of two models of the LAPV family, including the newest LAPV 6.1, must occur before the end of 2017. Judging by the latest reports, the companies implementing the order are still in compliance with the deadlines and are fully capable of transferring all the required equipment to the customer in accordance with the approved schedule.

Photo report from the test:
http://auto-motor-und-sport.de/bilder/mercedes-g-lapv-erlkoenig-10387175.html