January 26 2016
107
Su-25CM attack aircraft (according to Frogfoot's NATO codification, “frog's foot”) is a modernized version of the Su-25 single-seat attack aircraft. The car features an updated avionics, the addition of an indicator on the windshield and a multi-function display in the cockpit. Since 30 September 2015, the Su-25CM aircraft have been flown against terrorist formations in Syria, acting as part of the mixed air group of the Russian Aerospace Force.


Design work on the Su-25 attack aircraft began in the Sukhoi Design Bureau as far back as 1968. The new combat vehicle was originally designed to support the troops directly above the battlefield and was designed as the ultimate, simple to maintain and operate subsonic jet aircraft with high maneuverability and increased survivability. State tests of the aircraft were conducted from 1978 year. The Su-25 attack aircraft were manufactured at the aviation plant in Tbilisi, the first production aircraft was flown around 18 June 1979 by the test pilot of the Sukhoi Design Bureau Yu. A. Egorov.

A distinctive feature of the new attack aircraft, which was designed to act directly over the battlefield, in areas saturated with air defense weapons, was increased combat survivability. In order to provide it with designers, a whole range of various activities were carried out: a plane cabin reservation appeared on the plane, the explosion safety of the fuel tanks was ensured by filling them with polyurethane foam, retrofitting, and so on. Before being introduced into the design of the aircraft, all these measures were adequately worked out at the stands at the Design Bureau, and later were able to fully confirm their effectiveness during the operation of the attack aircraft during the hostilities in Afghanistan. 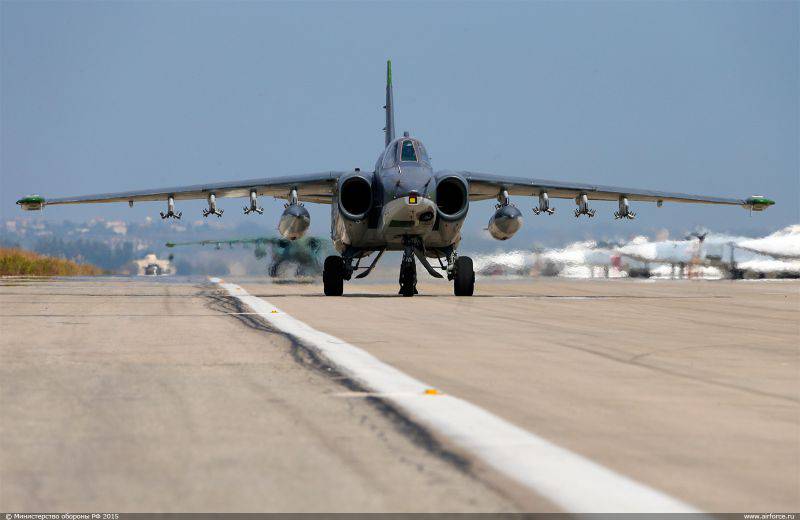 Naturally, the aircraft development is still 1970-s difficult to attribute to modern machines. By the beginning of the XXI century, the attack aircraft, despite its phenomenal survivability, which was confirmed by combat exploitation, was outdated. First of all, the composition of the onboard radio-electronic equipment and the impossibility of using high-precision weapons. It was these problems that were solved when upgrading the attack aircraft to the Su-25CM version.

At Sukhoi Design Bureau, a program to upgrade the Su-25 aircraft, which were in the arsenal of the Russian Air Force, to the Su-25SM version began in 2001. The flight of the first modernized aircraft took place on March 5, 2002; it was performed by test pilot of the design bureau I. E. Soloviev. The lead enterprise in organizing this program was the 121st aircraft repair plant of the Ministry of Defense in the city of Kubinka. At the same time, work on modernization of attack aircraft was carried out under the guidance and in cooperation with OKB. Currently JSC “121 aviation Repair Plant ”is the largest enterprise for the modernization and repair of not only front-line aircraft, but also aircraft engines. The company is one of the leaders in the field of aircraft repair in Russia. Modernization with simultaneous repair of Su-25 attack aircraft into the Su-25SM variant is a priority for the 121st ARZ. As part of the modernization, the aircraft receives fundamentally new qualities. Almost at the plant in Kubinka, a new aircraft is being created, even the center section of the attack aircraft is partially riveted. At the same time, such an attack aircraft costs the military cheaper than a new machine that would have been produced at an aircraft factory. And although the plant is engaged in repairing aircraft around the world, only aircraft of the Russian Aerospace Forces are being upgraded here.

The Su-25CM attack aircraft was to become a relatively inexpensive, reproducible aircraft, designed for a mass wartime pilot. For this reason, one of the tasks in the modernization of the machine was to reduce the cost of its implementation, as well as the retraining of pilots and technicians. In particular, unlike most foreign tactical aircraft, the Su-25CM received not two, but one MFC. As studies have shown, this decision is quite justified. 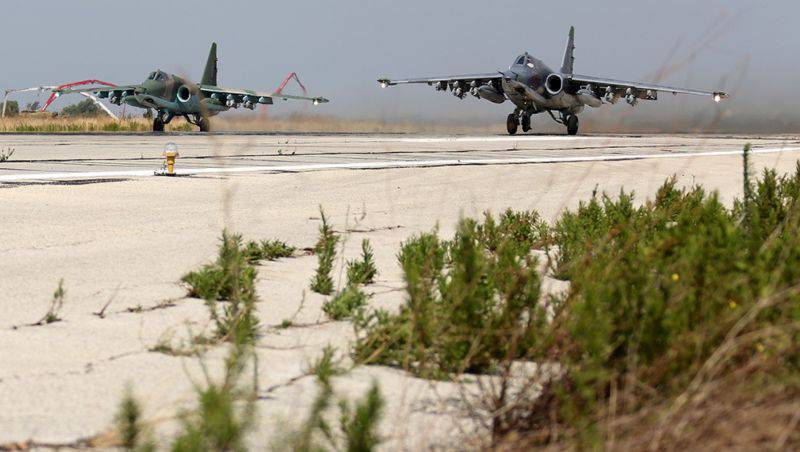 The upgraded Su-25CM attack aircraft (T-8CM) was created for operation in difficult weather conditions that are typical for Eastern and Central Europe, when up to 75% of days a year the lower edge of cloudiness can be at an altitude of less than 400 meters. This means that the working height of the bombing should be 200-300 meters. At the same time, the ammunition was to be dropped by the pilot from both horizontal flight and from complex maneuvers with ensuring high accuracy of hitting the target. The first 4 prototype Su-25CM aircraft were upgraded at the 121 aircraft repair plant in 2002-2004. Already in 2005, the state flight tests of the new machine were completed. The 2006 year was scheduled for the conduct of SLI - special flight tests. The aircraft successfully passed them, after which it was recommended for carrying out serial modernization. As it turned out later, on the modernization of the first stage, as the Su-25CM. In the summer of 2007, two of the first four modernized aircraft were transferred to the military in Lipetsk, the center of combat use and retraining of flight personnel (tail numbers - 19 red and 87 red).

Developers in the process of upgrading attack aircraft almost completely updated avionics. At the same time on the plane from the old avionics remained almost only a laser sight-rangefinder "Klen-PS", which in the future is planned to change to a modernized version, which has greater accuracy and power. At the same time, the attack aircraft glider did not change and was completely preserved from the original Su-25. Thus, in the design of the already existing fuselage of the aircraft, which retained its original configuration, the updated equipment was successfully inscribed - radio electronic units and systems, electrical harnesses.

In the process of upgrading the car, it was decided not to touch the power plant - two TR-R-95Sh with each 4100 kgf each, which had previously proved to the military its durability and reliability. In addition, we took into account the fact that the aircraft engines had a reserve for increasing the resource. At the same time, on engines Su-25CM, by analogy with the variant Su-25T, a revision was made related to surging. This innovation allowed to expand the allowable use of weapons regardless of the flight modes of attack aircraft. After completion of the power plant under the electronic rotary stall alarm system (ESWS), the engines received a new index P-95 индекс letter SM. During the overhaul of the attack aircraft instead of the P-95Sh engines, it is also possible to install the P-195 engine. 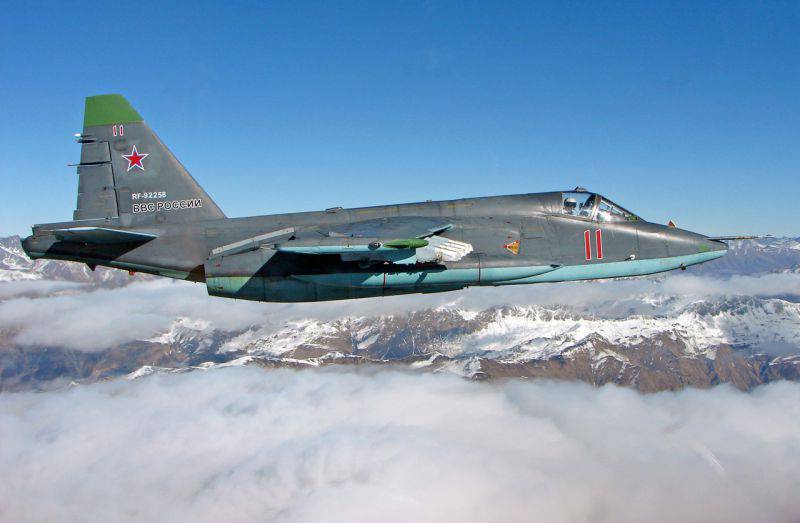 The transition of the attack aircraft to the new avionics allowed to save approximately 300 kg only on the onboard equipment. Thanks to this, it was possible to transfer from the tail section of the aircraft, which is most vulnerable when firing rockets or MANPADS with thermal homing heads, a number of important blocks into a much more secure nose of the aircraft. There were also a number of improvements related to the increase in combat survivability of the attack aircraft. Some of these improvements have already been partially implemented on the latest series of Su-25. It is worth noting that, in order to carry out modernization, on the 121-th ARZ, first of all, airplanes of a later model year (10-series, which was produced from 1987) are transmitted, possessing still a rather high undeveloped resource, on which a number of improvements in areas of combat survivability. At the same time, as part of the modernization, the mass of the empty aircraft practically did not change.

The combat capabilities of the attack aircraft were significantly enhanced by the use of the new PrNK-25CM (56CM) Bars, specifically designed for this aircraft, on it. The complex included a digital computer, as well as information display and processing systems, near and satellite navigation, an electronic reconnaissance station, an automatic radio compass, an aircraft transponder, a digital-analog weapon control system, an on-board “Karat -B-25 "and some other systems.

On Su-25CM attack aircraft, the L-150 “Pastel” - radar warning warning station is mounted. In the nose of the aircraft was installed laser station for illumination and distance measurement "Klen-PS", which provides guidance to the target SD with laser homing heads. At the same time, aircraft upgraded from the 2013 of the year (in the Su-25CM3 version) also receive the newest EW station Vitebsk-25 and can also use an expanded range of guided weapons, in particular, adjustable laser and television guided bombs. The number of upgraded Su-25 in the structure of the Russian Aerospace System by 2020 should exceed 130 units. In this case, the simple Su-25 and the already upgraded Su-3CM will be upgraded to the Su-25СМ25 version. 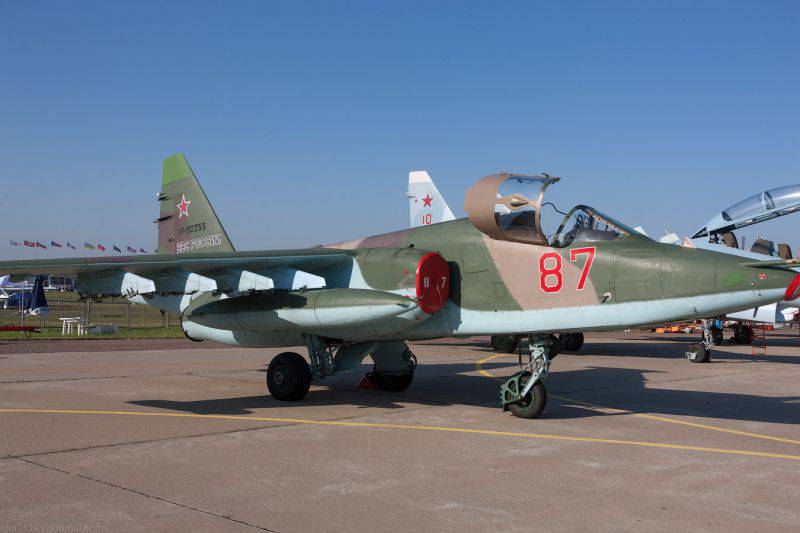 The cabin of the upgraded attack aircraft was equipped with one multifunctional color indicator (MPCI), which can be displayed cartographic, flight, tactical or sighting information. In particular, information on the current location of the front line, the location and areas of the detected enemy air defense systems and other information can be projected against the background of a digital geographical map of the area. Instead of an aviation small sight АСП-17БЦ-8 (for the pilot, the main working tool when making an attack), a wide-angle indicator on the windshield (ILS) was installed on the Su-25CM attack aircraft. This indicator received a cathode-ray tube (CRT) of increased brightness, which allows the pilot to use ILS almost in direct sunlight. All necessary information for attacking and piloting can be displayed on the indicator on the windshield. At the same time, as in the usual Su-25, there was no autopilot on the last upgraded Su-25CM.
The presence of a built-in onboard equipment control system on a modernized aircraft has significantly reduced labor costs in preparing the attack aircraft to commit re-departure. Time for maintenance of the machine was reduced by 25-30% compared with the base model.

The accuracy of navigation and combat use of unguided aircraft armament systems on the upgraded aircraft increased 2-3 times, and in bomber applications it reached the level of accuracy of guided aircraft destruction weapons. As a result of the modernization, the Su-25CM aircraft became a combat vehicle with a new target designation and combat effectiveness, which increased 1,5 times. Thanks to the use of modern inertial-satellite navigation system on the aircraft, it was possible to achieve the accuracy of determining the coordinates around 15 meters with correction and 200 meters - without satellite correction. 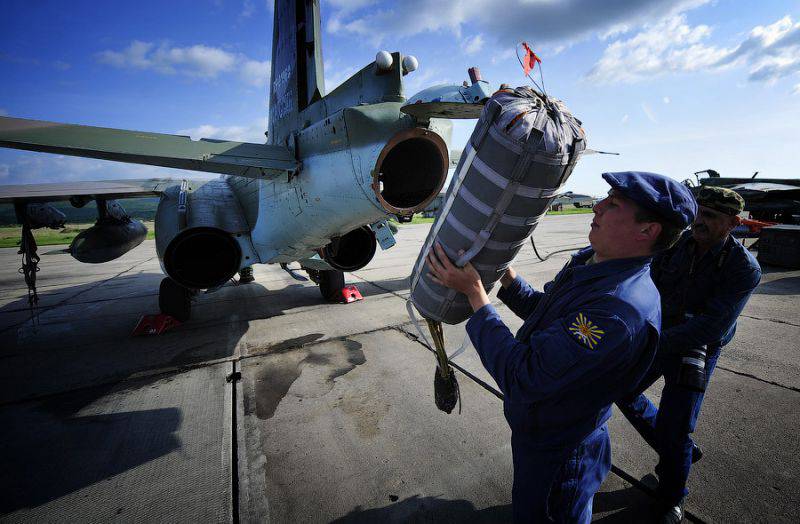 In the absence of a worthy replacement for the Su-25 attack aircraft at the moment, the program for upgrading it to the Su-25CM variant also allowed for the overhaul of vehicles that had already served 17-18 for years, to extend their service life in the Russian armed forces for another several decades. During this time, in the country, most likely, a new tactical tactical complex will be developed and put into production. 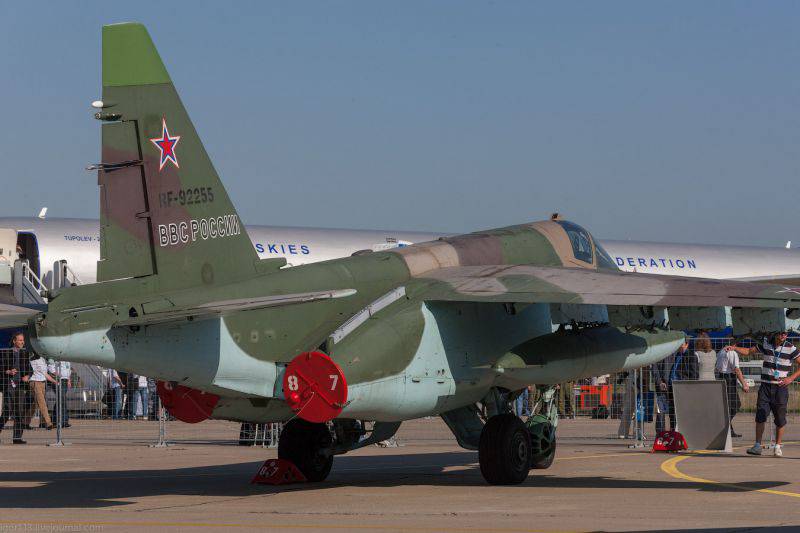 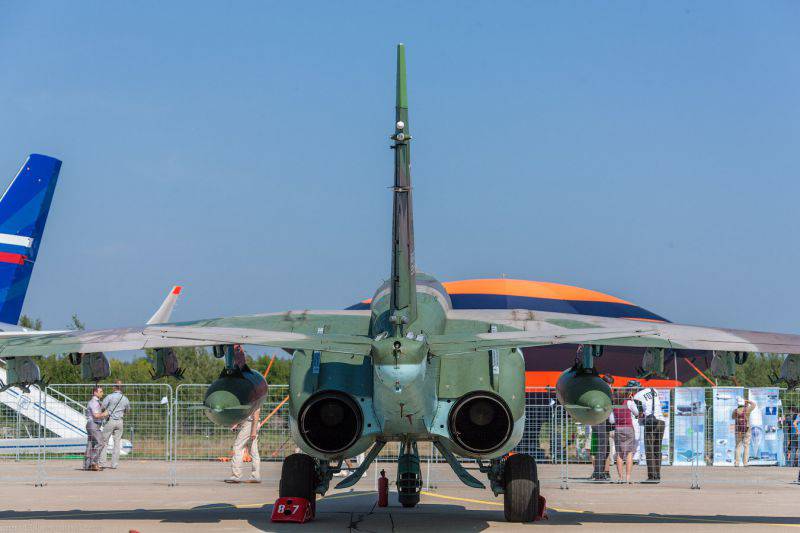 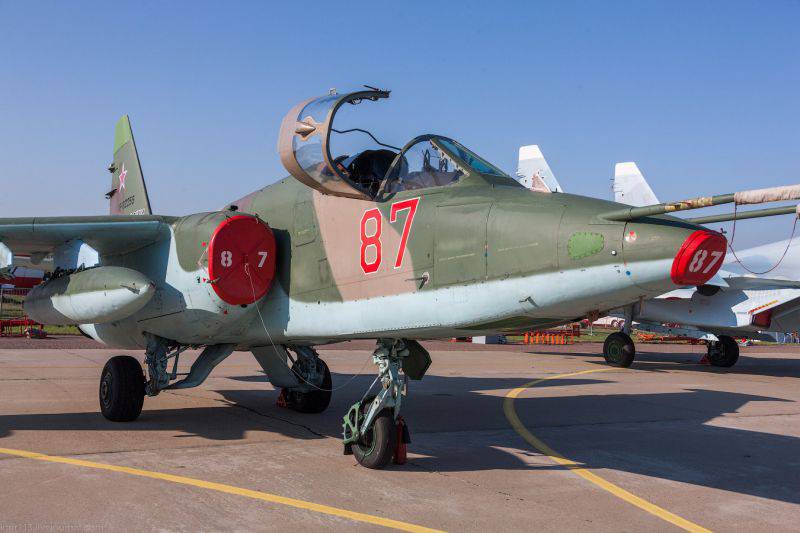 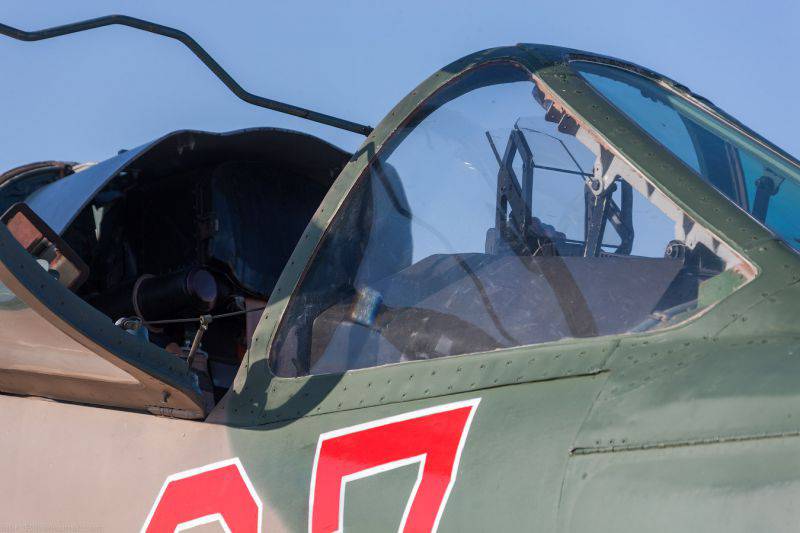 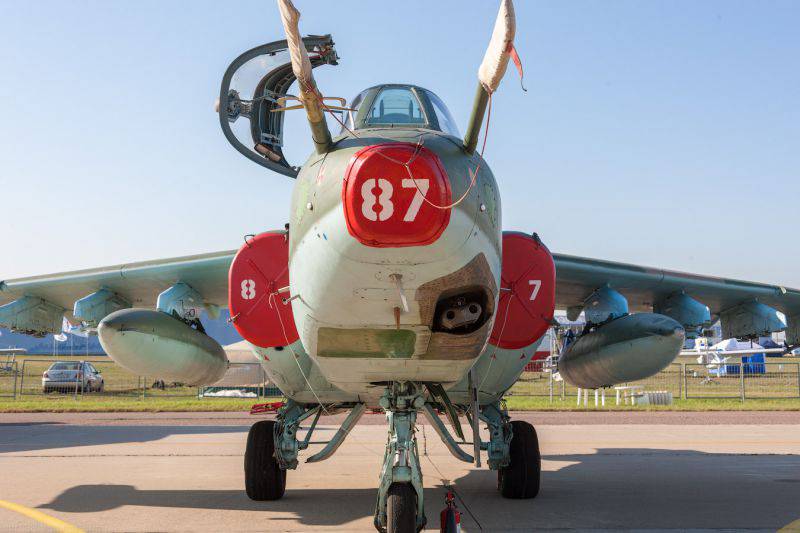 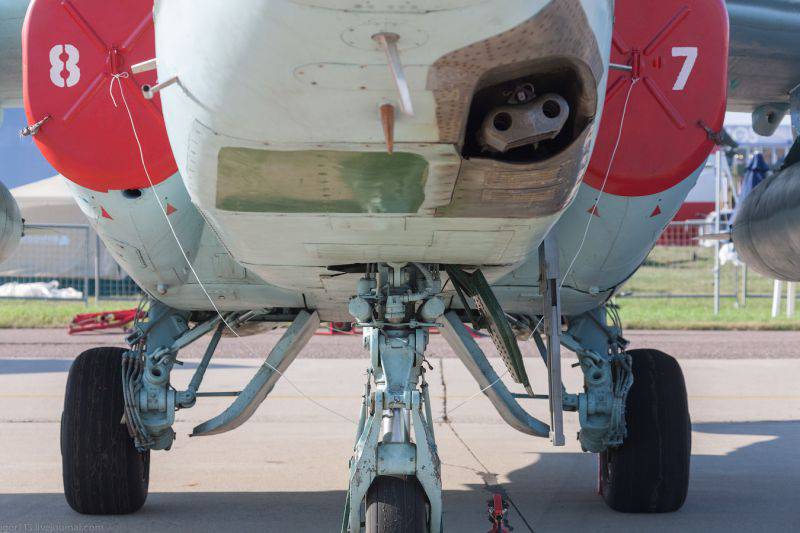 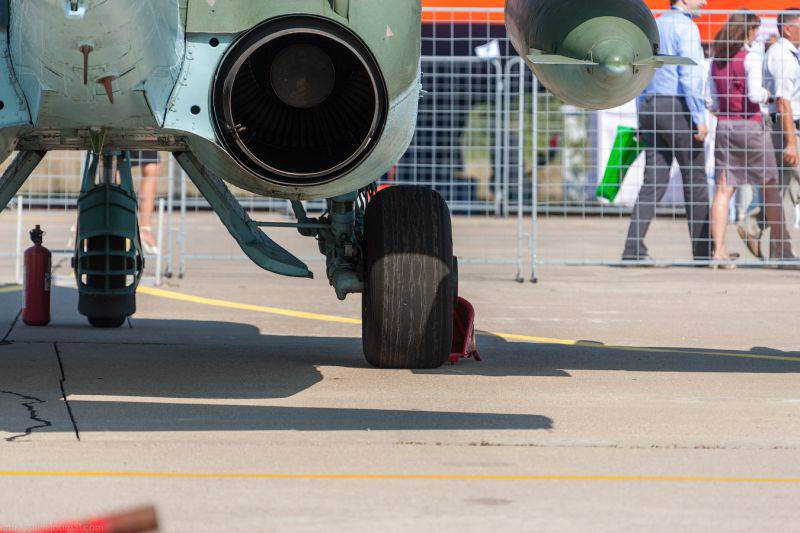 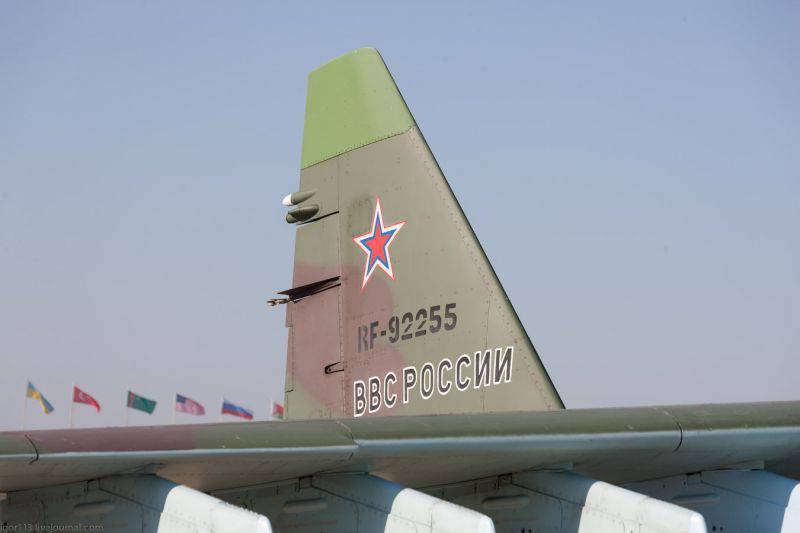 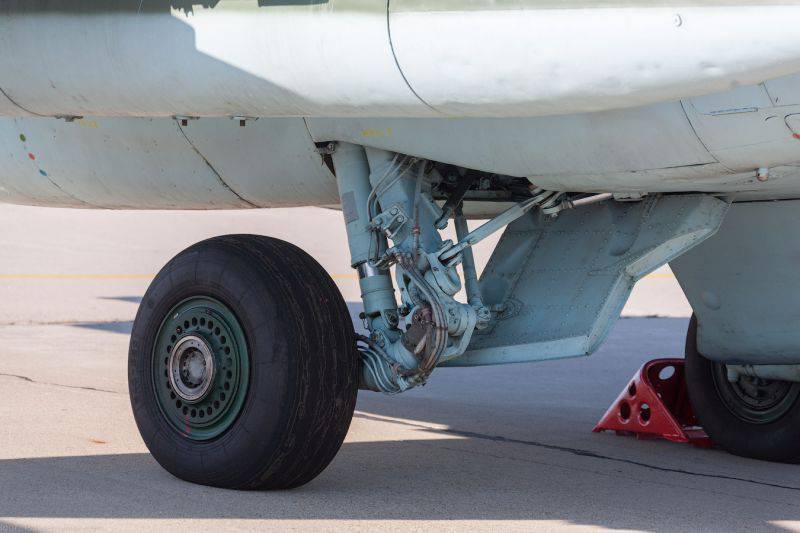 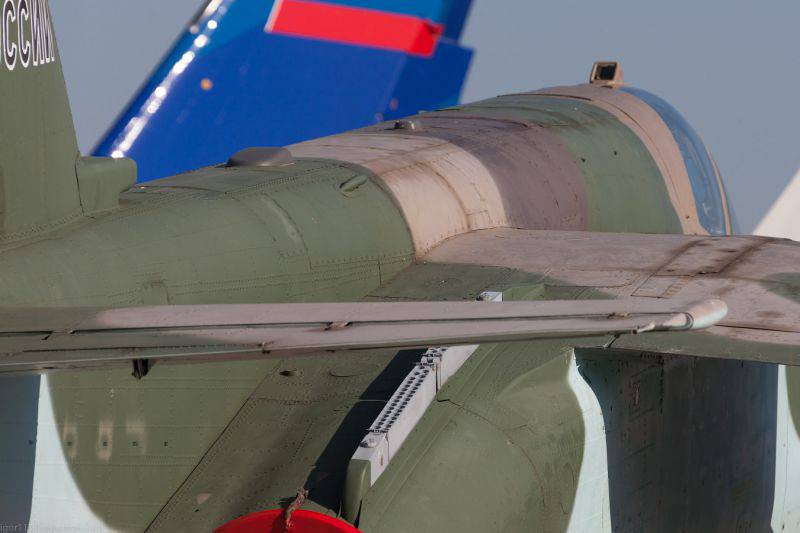 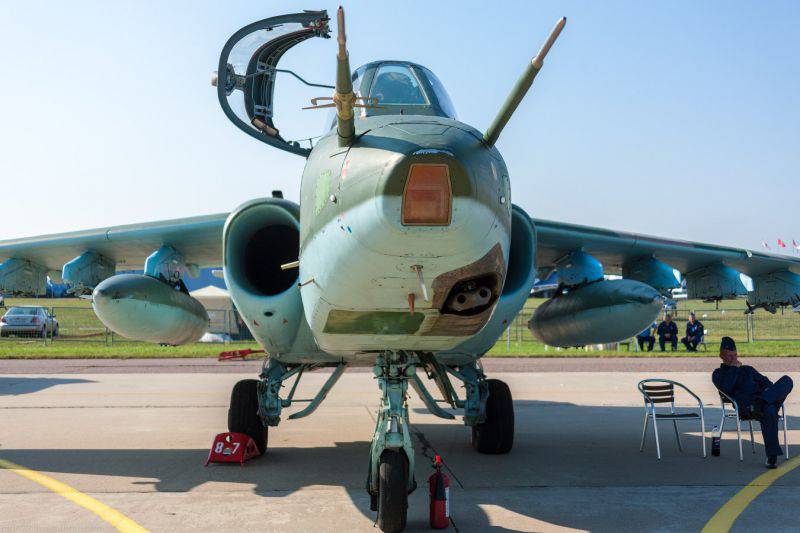 Ctrl Enter
Noticed oshЫbku Highlight text and press. Ctrl + Enter
We are
An-12 in AfghanistanHistory of Soviet Aviation. Polikarpov P-1 - the first serial Soviet aircraft
107 comments
Information
Dear reader, to leave comments on the publication, you must to register.