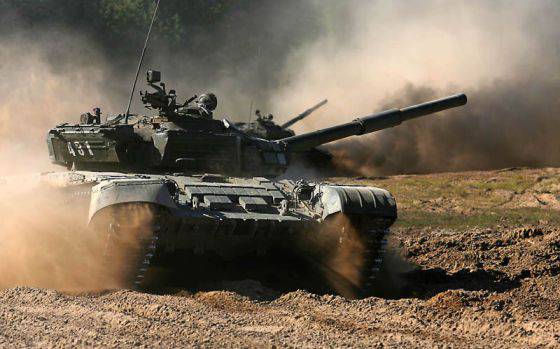 At the January 22 meeting of the Security Council of Belarus, President Alexander Lukashenko confirmed the state’s peace-loving policy. Moreover, as the Commander-in-Chief noted, there is currently no direct military threat to Belarus. That is how the Belarusian leader assesses the level of security in the region.

At the same time, a certain lull is not a reason for calm and should not be misleading. So, despite the fact that the main source of threats Lukashenko noted the possible destabilization of the situation inside the state, the Minister of Defense was tasked to explore all options for responding to modern threats by force, taking into account the long-term forecast. The result of this work is reflected in the new Military Doctrine of Belarus.

It seems that the official Minsk nevertheless realized that at the heart of state security, first of all, lies the military component and only then the economic, environmental, etc. This is obvious - there is no point in creating and accumulating national wealth, if it is not possible to protect it from outside attacks, including with the support of internal extremist forces. And as Ukraine has shown, there will always be those who wish.

Maybe that’s precisely why the activity of the military-political leadership of the country on building up the military power of the Belarusian army has recently intensified. So, in the most difficult economic conditions, the main efforts of the Ministry of Defense are aimed at the purchase of new weapons and military equipment, as well as the modernization of existing ones. Moreover, this process went far beyond the priorities outlined last year: the Air Force and Air Defense Forces, MTR, as well as the development of UAVs. To increase the combat capabilities of the units, new aircraft, radar systems are purchased, communication systems are updated, and now the turn has reached tanks.

According to the plans of the military leadership of Belarus, responsible specialists have already begun to implement a phased modernization of all T-72Bs in service. If we consider that the T-72B is the main battle tank of the Belarusian army, the number of which exceeds 400 units, then we can say that the tank units will in the future reach a qualitatively new level.

It is not by chance that last year, 140 Repair Plant, one of the main enterprises of the State Military Industrial Committee of Belarus, demonstrated its own program of deep modernization of T-72B - Vityaz. Obviously, Belarusian tanks will be modernized at home - this is cheaper, more reliable, and more practical. Moreover, it is well known from competent sources that the first “Vityazi” have already left the assembly line, have been tested in units during combat training and have shown quite high efficiency. All this allows us to assess the feasibility of the ongoing program. It can be assumed that soon the modernized "seventy doubles" will go to the troops. 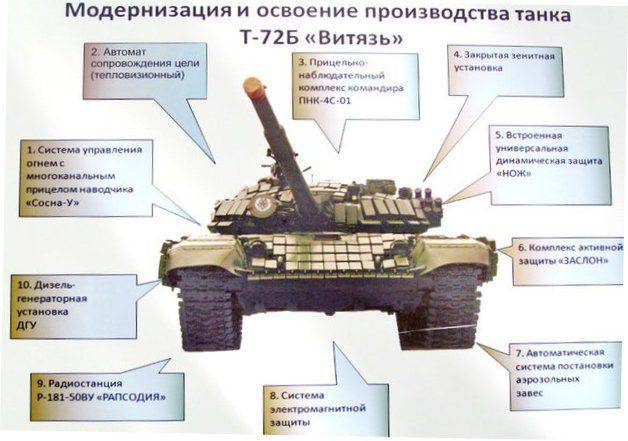 What's new in the Belarusian version of the modernization of the T-72?
Belarusian defenders have undergone a radical change in the fire control system. This is, first of all, the installation of a modern fire control system with the multichannel gunner sight Sosna-U, a target tracking machine, an aiming and observation complex of the commander PNK-4С-01. These changes allow the gunner to search for and hit targets from a cannon and a coaxial machine gun in the “Double” mode at any time of day, in any weather. In addition, the combat vehicle is additionally enhanced by a closed anti-aircraft machine-gun installation, which makes it possible to more effectively fight not only airborne, but also ground targets from the combat compartment of the tank at a distance of up to 1600 meters.

In addition, the combat potential and survivability of the tank have been significantly increased due to the use of the latest active systems (“Barrier”) and dynamic protection (“Knife”). Interestingly, thanks to the use of domestic developments in the modernization, Vityaz managed to reduce its vulnerability to anti-tank weapons and mines with magnetic fuses, as well as to increase the tank's camouflage, many other combat and operational capabilities.
Also, Vityazi are equipped with new digital radio communications (P-181-50BU “Rhapsody”) and navigation (GLONASS / GPS). Also announced improved ergonomic features. However, as noted in the Ministry of Defense, the growth limit for tankers will still remain.

Not everything is so smooth ...
Of course to call the Belarusian version of the modernization of the T-72B "Vityaz" deep is somewhat presumptuous. First of all due to the fact that the changes did not affect the engine, automatic loader and gun. And if they left the gun, as there was simply nothing to replace it at the moment, and the engine is untouched due to considerations of its reliability and maintainability in Belarusian conditions, then it is quite possible to improve the automatic loader for domestic engineers. And, as experts assure, in the near future Belarusians will deal with this issue.

Somewhat different история used in the "Vityaz" systems of dynamic protection "Knife" and active protection "Barrier" of Ukrainian production. Against the background of extremely difficult relations between Russia and Ukraine, the use of Minsk, Moscow’s closest ally, of Ukrainian military technologies is somewhat unreasonable. Probably, this approach was due to low rates and the overpriced Russian dynamic protection "Relikt". At the same time, according to Ukrainian experts, the contract of Minsk and Kiev for the supply of sets of dynamic protection involves the subsequent transfer of its production technology, which will significantly improve the capabilities of the domestic military-industrial complex and increase its export potential.

As for the "Barrier", then from the Russian colleagues to him a lot of complaints, which, however, are refuted by American experts, who independently conducted a study of the system. Moreover, Russia itself is developing an active protection system for “Afganit”, which is based on the same principles as “Barrier”.
Analyzing these facts, it becomes clear that the military leadership of Belarus, making a decision on the modernization of the T-72B tank fleet, proceeded primarily from the economic possibilities of the country, leaving aside political ambitions.

Tank biathlon
Interestingly, military competitions held under the auspices of Russia can become an arena for demonstrating not only the combat skills of the personnel, but also demonstrating the achievements of the military-industrial complex. In this sense, it is noteworthy that at the next tank biathlon competitions, Belarusians will be able to root for their crews already at the Vityaz. Let's hope that the upcoming participation of representatives of Belarus in these competitions will be more successful than in previous years.

Ctrl Enter
Noticed oshЫbku Highlight text and press. Ctrl + Enter
We are
Asian armored fighting vehiclesWhat light armored vehicles will be in demand in the future?
40 comments
Information
Dear reader, to leave comments on the publication, you must to register.