SU-2: “Second-tier ACS” based on a tractor

January 21 2016
33
In the early 1930s, the successes of industrialization in the Soviet Union allowed for the development of automotive and tank industry, which, in turn, allowed us to begin full and wide motorization and mechanization of units and divisions of the Red Army. The process of developing new tractors, automobiles, tanks and artillery tractors was at a rapid pace in the country. In accordance with the military-theoretical thought of that time, it was believed that the shock and fire power of mechanized formations should be provided not only by tanks, but also self-propelled guns — self-propelled artillery installations.


For this reason, the 2 of October 1930 of the year, the Revolutionary Military Council (RVS) of the Soviet Union adopts the “Resolution of the PBC on an experimental armored armament system in terms of self-propelled artillery installations”. According to the resolution adopted by the Soviet design bureaus and factories, it was necessary to design and manufacture 1 types of ACS for various purposes by October 1931 October. This scope of work in this area was not planned at that time in any country in the world, including Germany, which was considered a leader in this field.

Curious is the fact that, along with the ACS, direct support and maintenance of the mechanized units (most often these self-propelled guns were designed on the chassis of tanks), the RVS decision provided for the development of the “ACS of the second echelons” in the country. The tasks of the data of self-propelled artillery installations were defined as follows: “The purpose is to support and support the attack of the tanks of the second echelon of the escort of infantry”. Industrial tractors “Kommunar” and “Stalinets” should be used as chassis. The mass of self-propelled guns should not exceed 9-10 tons, maximum speed - 12-15 km / h. Arming these self-propelled second-tier planned 76,2-mm regimental gun or 76-mm anti-aircraft gun. The horizontal angle of the pickup should have been at least 300 degrees, the vertical angle should be 30 degrees. 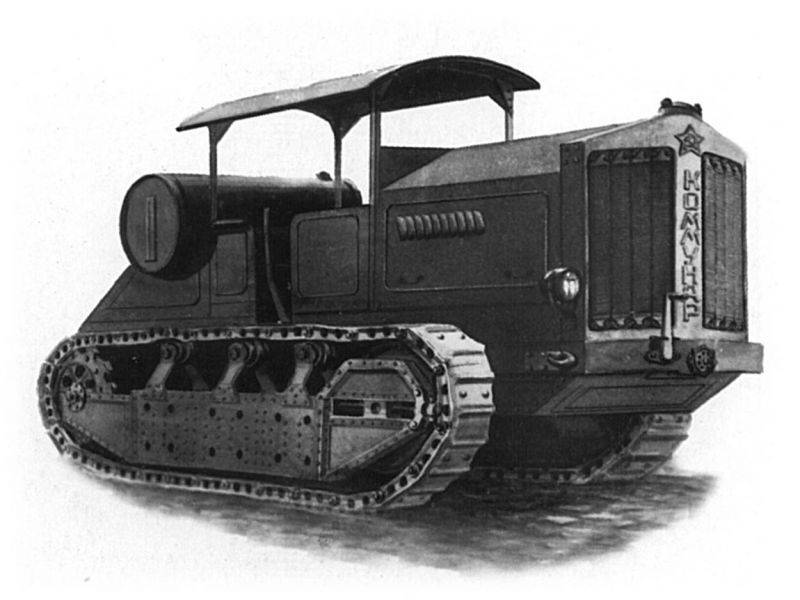 Nowadays, it may seem strange to many, if not ridiculous, the enthusiasm of the leadership of the Red Army for self-propelled guns built on the chassis of conventional tractors. However, one should take into account the fact that at that time not a single army in the world had experience in creating such weapon systems. For this reason, the Soviet military and designers were forced to go by trial and error. In addition, the experience of using self-propelled guns on the chassis of tractors in 1920-s, including trophy white-guard self-propelled guns based on British and American tractors, was positive. These limitedly used combat vehicles showed a fairly high efficiency with relatively low labor costs for production.

In addition, the use of tractor chassis, which were several times cheaper than tank, promised for SAU great benefits. First, such a chassis made it possible to provide the Red Army quickly equipped with self-propelled artillery. Secondly, in the case of a big war, it was possible to dramatically increase the number of combat vehicles by simply reworking the existing tractors in the country's economy into self-propelled artillery installations. In those years, this idea seemed very attractive, especially if we take into account the poor equipment of the Red Army with armored vehicles and the existing difficulties with setting up the production of tanks in Soviet factories.

As the chassis for new self-propelled units, it was decided to choose the first Soviet tracked tractor "Kommunar", focusing on the model З-90. The Kommunar tractor, which was produced by the Kharkov Locomotive Plant (KhPZ), was developed on the basis of the popular German tractor Hanomag WD-50. This tractor was actively used not only in the Soviet national economy, but also in the Red Army as an artillery tractor. The tractors of the З-90 version were the most mass version of “Kommunar” and were produced with minor changes until the 1935 year. The main purpose of this series of tractors was “thrusting artillery loads with high speeds ahead up to the appearance of special tractors”. On the tractor Kommunar Z-90 there was a carburetor gasoline engine, which developed the power of the 90 hp. With a weight of 8,5 tons, he could carry up to 2 tons and pull in a trailer up to 6 tons of cargo. The tractor was equipped with a gearbox with three speeds forward and one back, it could reach speeds in the range from 3,9 km / h to 15,2 km / h. The power reserve of the Kommunar was 150 km. 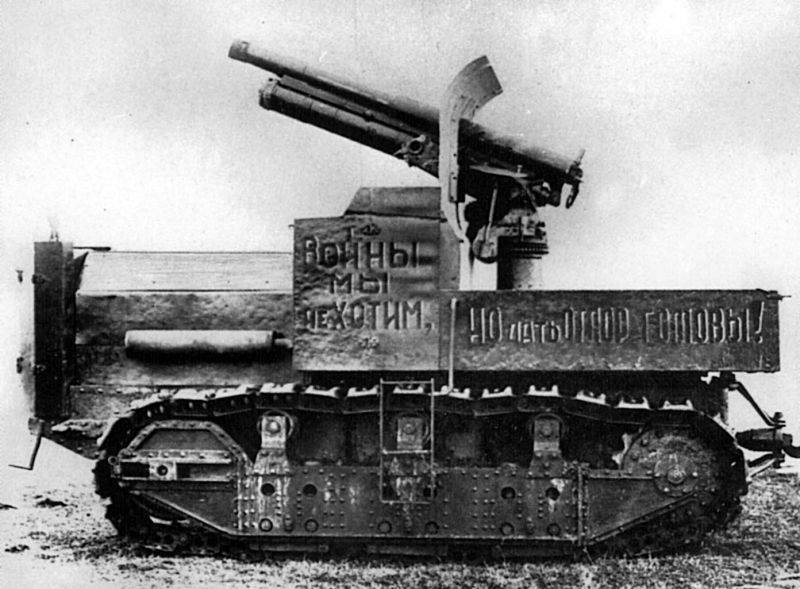 In August, the Leningrad Bolshevik plant together with the military warehouse No. XXUMX located in Bryansk took up the development of an ACS of the second echelon on the basis of the tractor in August 1931. This warehouse was the main base for the construction and modernization of armored trains for the needs of the Red Army. It produced not only armored trains, but also armored tires, as well as individual armored cars. Joint development received the designation SU-60. The main armament of the self-propelled guns was the widespread 2-mm regimental gun model 76,2 of the year.

For installation on the chassis of the tractor "Kommunar" this tool it was strengthened. The driver's seat, the mounting brackets of the booth with the uprights and the gas tank in the rear of the tractor were removed. The gas tank was moved and secured over the right track, and the metal flooring of the frame at the cabin was expanded. On the site of the dismantled driver's seat in the middle part of the tractor, a regular gun stand of the Sormovsky plant design was installed, which was used on armored trains. Thanks to this decision, the gun received a shelling sector in 360 degrees. The project provided for the protection of the weapon with armor up to 10 mm in thickness, but on a prototype of the self-propelled gun, the armor was made of ordinary (not armored) steel. Ammunition 76,2-mm guns, which consisted of 200 shells, had to be transported on a special trailer cart.

The Su-2 self-propelled gun tests were conducted from 12 to 16 in October 1931 in the vicinity of military warehouse No. 60. In four days, the car passed the 35 km, while 39 shots were performed: 38 from the spot and one on the go. In order to maximize the conditions of the running tests to the military trials, the self-propelled unit towed a special tractor tractor P-18 with a weight of 2500 kg and gun crew (5 people). The maximum speed of the movement reached 12 km / h. In general, the SU-2 made a favorable impression on the representatives of the Red Army. Its positive qualities included: the presence of a circular sector of shelling from a gun and its compliance with the requirements of the army, relatively simple maintenance and speed characteristics that were not bad at that time. In addition, if the SU-2 self-propelled self-propelled gun was adopted by the Red Army, the problem with spare parts could be solved by using spare parts from conventional tractors. 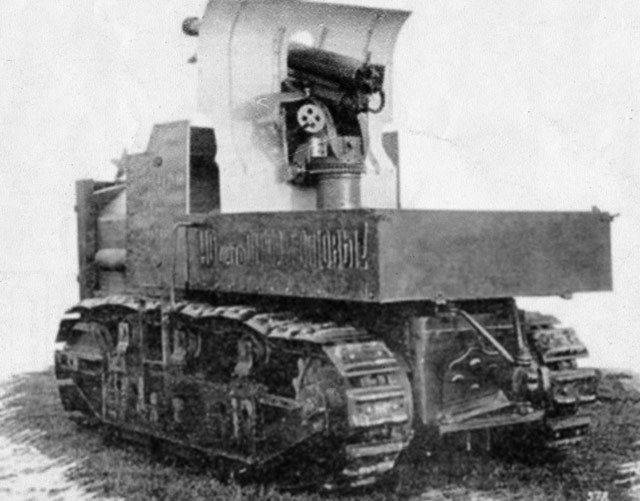 Initially, the self-propelled guns even recommended the use of divisional artillery, and also suggested considering the possibility of developing on its base an 122-mm self-propelled howitzer, as well as a self-propelled anti-aircraft gun. But the modified version of the SU-2 with the 122-mm gun, which was submitted some time later on the NIAP, turned out to be excessively heavy. SU-2 did not adopt the Red Army, and at the end of 1931 and the beginning of 1932, the country launched a new program for the construction of self-propelled artillery guns on the chassis of the T-26 light tank, which had better running characteristics and much more mobility . It was decided to concentrate all efforts on the development of self-propelled installations on tank and special chassis.

SAU SU-2 and SU-5 were recommended for adoption, it was planned to even begin the construction of an experimental series of machines. But the appearance in the USSR of the T-26 tank, which was recognized as much more promising in terms of creating an ACS at its base, and also the order that was followed in 1932 to transfer all the old types of artillery systems to warehouses, put an end to these "combat tractors." The attempt to install a more perfect 5-mm anti-aircraft gun on the SU-76,2 was doomed to failure initially due to the lack of the necessary safety margin of the tractor chassis. As a result, both self-propelled guns were dismantled, and the idea of ​​building an ACS based on a tractor in the Soviet Union was not returned until the 1941 year. 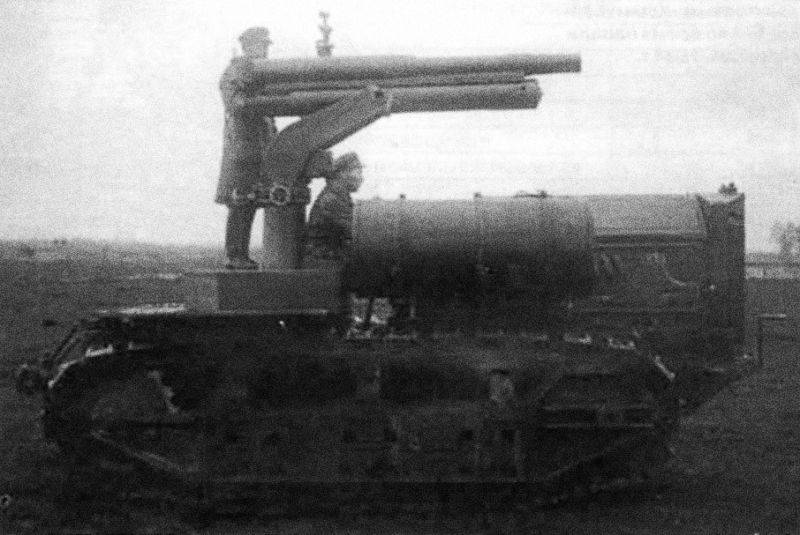 It should be noted that in case of adopting the SU-2 and SU-5 self-propelled guns, they would inherit the problems of the Kommunar tractor itself. A significant drawback in the production of these machines at KhPZ was, in fact, individual production. Interchangeability of parts was absent even within the same series of machines. When ordering at the Kharkov factory of newly installed parts and assemblies, for example, an engine, it was necessary in addition to the catalog number to indicate the serial number of the tractor produced. Such a situation made it difficult to supply spare parts, complicated the operation of tractors and increased the cost of their production. Over time, the situation at KhPZ gradually changed for the better, however, this problem was not solved at the plant and with the release of other products until the beginning of World War II.