January 26 2016
33
Currently rifle weapon based on several time-tested and proven schemes. Radically new innovations appear extremely rarely and almost never become widespread. At the end of the 19th and the beginning of the 20th century, the situation was different. The used schemes used now either did not exist yet or did not have time to gain popularity. Because of this, any designer with his original idea could become the future classic of the weapon case. So, at the very end of the 19th century, the Norwegian gunsmith Halvard Lanstad made an attempt to create a cardinally new model.


One of the promising approaches to creating promising systems with high performance is to combine the positive features of different samples. It was on this path that the Norwegian gunsmith decided to go in his new project. He proposed to create a gun with a store supply and a revolving drum. This concept was called the "automatic revolver". It should be noted that this name in those days was also applied to self-loading revolvers, which can be confusing.

The “automatic revolver” project was developed by H. Lanstad in 1899. Soon a patent was obtained for this invention. In the future, the gunsmith offered his development to the Norwegian military, who conducted tests and made certain conclusions. Probably, they were interested in a curious proposal, but the implementation of the original design clearly did not suit the potential customer. 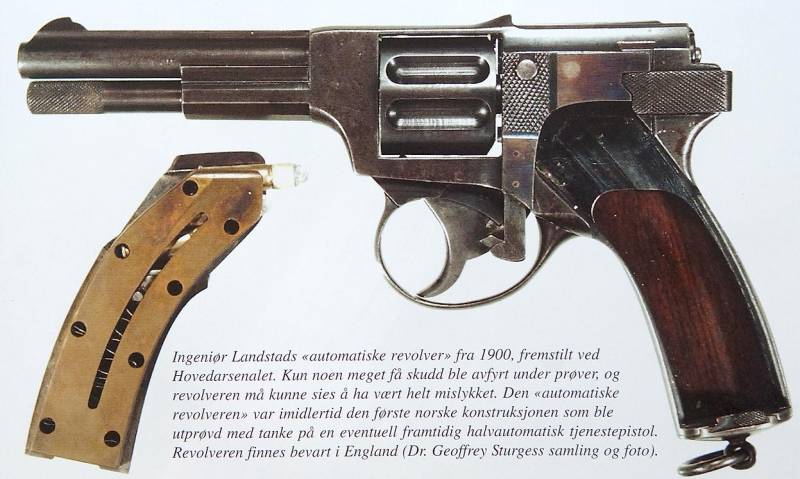 General view of weapons and shop

The new project proposed to combine the positive features of self-loading pistols and revolvers. A perspective weapon from pistols was to receive a relatively large ready-to-use ammunition, from revolvers - reliability, ease of operation and safety. To implement such plans, H. Lanstad had to re-design all the elements of his weapon, without using any existing models as a basis.

The main element of the new weapon was a metal frame with a 7,5 mm caliber barrel pressed into it. In general terms, this unit resembled the details of revolvers, but the original design ideas led to the appearance of some differences. The barrel and the supporting cylinder of the drum axis (under the barrel) were fixed in front of the frame. Behind the barrel there was a large window for the drum, under which the trigger bracket was located. At the rear of the frame, behind the window, mounts were provided for parts of the firing mechanism and ammunition supply systems. Under them, in turn, there was a handle in the form of a hollow design with a place to install the store.

The greatest interest in the "automatic revolver" by H. Lanstad is the ammunition system. Wanting to improve the characteristics of the weapon, the inventor literally crossed a self-loading pistol with a magazine and a revolver with a drum. This led to the creation of an original feed system for the cartridge to the barrel.

A special flat-shaped drum was installed in the front frame window, in which only two chambers for the cartridges were provided. The use of a full-fledged store allowed to reduce the drum within reasonable limits, while retaining its main functions. In the handle it was proposed to place a single-row store of a special curved shape. For some reason, the store was supposed to be placed not through the lower receiving window in the handle, but inserted into it on the left side, in the corresponding large window. In this case, the left wall of the store was made in the form of a full-fledged side of the gun and was even equipped with a wooden lining. The capacity of the magazine was 6 cartridges caliber 7,5 mm Nagan system (7,5x23 mm R). At that time, this ammunition was the main patron of its class in the Norwegian army. 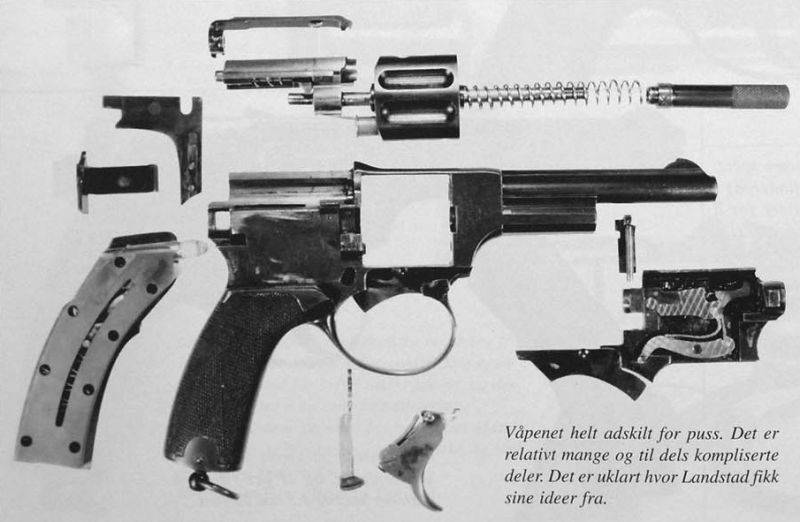 In the back of the frame there were two cylindrical grooves, interconnected and containing the main parts of the firing mechanism. On the right side of the frame there was a plate-cap on which other USM components were attached. In addition, she did not let the springs and other parts fly from their seats. The used design USM allowed to fire in a self-loading mode, cocking the bolt-drummer and turning the drum with cartridges. She also provided automatic extraction of spent cartridges.

According to available data, the automatics of the revolver H. Lanstad was built on the basis of a free gate (according to other data, on the basis of a double action USM and free gate). In the upper groove of the cavity of the frame was placed a spring-loaded bolt, combined with a drummer, with which the cartridge primer was ignited. Also an extractor was connected to the gate. In the lower cavity, as follows from the available data, a part was placed for feeding cartridges from the magazine to the drum. The shutter and the feeder together moved back, and their displacement forward was provided by its own springs and carried out separately. For the initial cocking mechanisms used a system similar to the pistol USM with a slide gate.

Nominally, being a revolver and using revolving mechanisms, X. Lanstad's weapon did not need a safety lock. The safe handling of it should have been ensured by the characteristic features of the structure.

For aiming, the prototype of the new weapon received extremely simple adaptations. A small front sight was located above the muzzle of the barrel, and on the upper part of the frame, behind the drum, there was a protrusion with a slot that served as the rear sight. 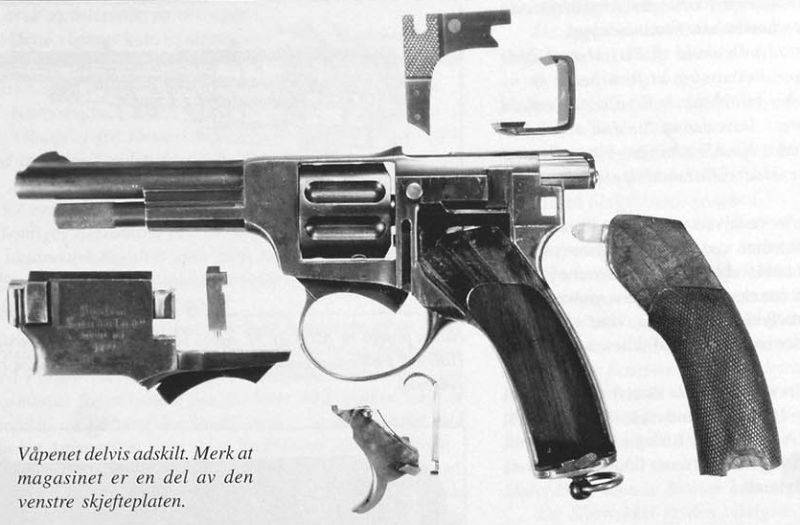 The handle, including the side wall of the store, was equipped with two wooden plates for greater ease of loading. On its lower surface a metal ring was provided for a safety lace. In terms of ergonomics, the “automatic revolver” by H. Lanstad differed little from the usual revolvers of the time, including those in service with Norway.

The original design led to the emergence of a non-standard way of working mechanisms. In preparation for the shooting should be placed in the handle of the "automatic revolver" curb shop. Then you had to pull the bolt handle in the back of the frame and release it. In this case, the bolt-drummer became a platoon, and the feeder sent the upper cartridge from the store to the lower chamber of the drum. After that, you could pull the trigger and fire. When the hook was pressed with the help of a special thrust, the force was transmitted to the drive of the drum, which led to its rotation by 180 °. After filing the chamber with the cartridge released the shutter. Drummer hit the cap and fired a shot.

Rolling back under the effect of recoil, the bolt seized the sleeve, removed it from the chamber and threw it through the corresponding window in the upper part of the frame, while he himself stood on the support. When moving backward, the bolt driver also shifted the feeder, which then moved forward with its own spring and sent a new cartridge to the lower chamber. For the next shot, you had to pull the trigger again, turning the drum and releasing the bolt.

It is easy to see that the design of the “automatic revolver” by Halvard Lanstad was original and interesting, but was very complex. In addition, the combination of two types of small arms in one sample led to the emergence of several fundamentally unrecoverable problems. Correcting these shortcomings would require completely reworking the entire structure or even abandoning the ideas underlying it. 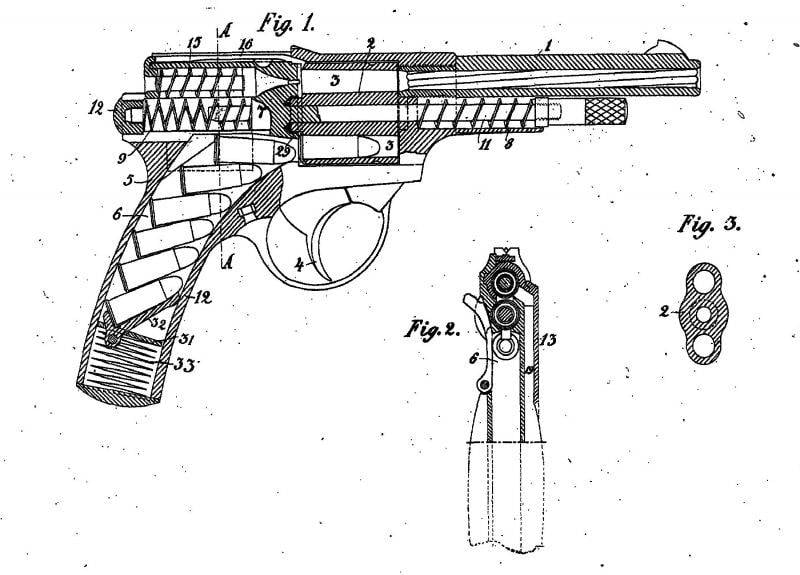 In 1901, H. Lanstad presented his invention to the Norwegian military. According to reports, representatives of the military department immediately reacted to his proposal with skepticism. Nevertheless, despite the opinion that emerged after the first acquaintance, the “automatic revolver” was sent to the landfill for verification in practice. Such tests allowed to identify all the insignificant pluses and a lot of minuses.

The main and, perhaps, the only advantage of the new project was the fact that the original architecture of weapons was created by a Norwegian expert. Other expected positive features, such as the safety of a revolver and a pistol ammunition, have not been confirmed in practice.

It was too difficult to reload weapons. The need to insert into the side window of the handle of a fairly large store made it difficult to work with weapons, and also did not give particular advantages over other methods of reloading, including clips for revolvers. In addition, according to some reports, for the first shot, it was necessary to pull the bolt handle twice to feed the cartridge into the lower chamber, and then turn the drum.

According to the firing characteristics of the submitted sample could hardly seriously differ from weapons that consisted in service. Nevertheless, he differed from them by other features. It was harder and more expensive to manufacture, even considering the mass production of large series, and also had no particular advantages in terms of ammunition size, reload speed, etc. Skeptics from the Norwegian army were right: the proposed weapon could not be used in practice. 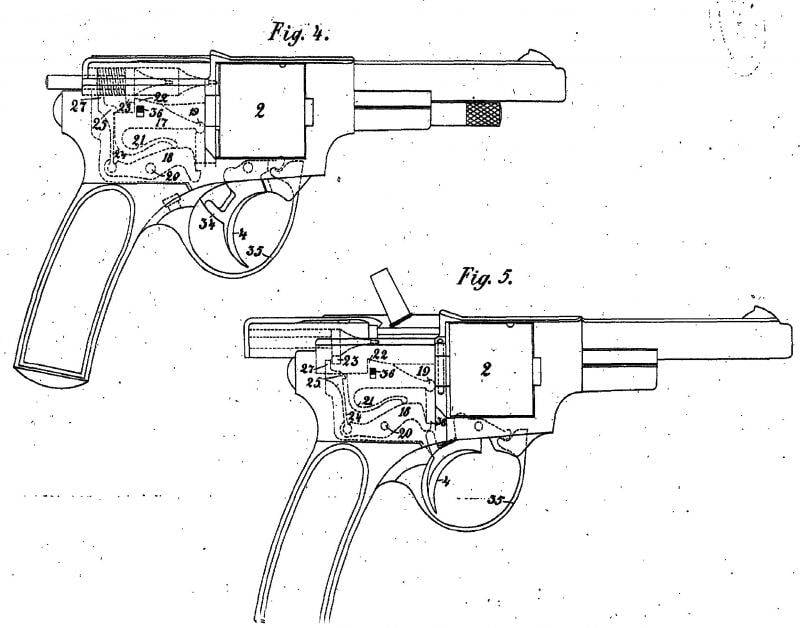 According to the test results, the Norwegian army decided not to use the “automatic revolver” by H. Lanstad and not to order its mass production. In the arsenals of the army remained less bold, but time-tested weapons. Nobody needed the prototypes of the perspective system.

Apparently, at least two experienced pistols were made, which were used in the initial and field tests. These samples differed from each other in some external details and elements of decoration. In addition, it cannot be ruled out that the internal mechanisms were subject to changes.

It is known that at least one of the prototypes of the “automatic revolver” belonged personally to Halvar Lanstad. Over time, he left Norway for the UK, where he lived until his death in 1955. The heirs of the inventor handed over a unique sample of weapons to the British National Rifle Association, which placed it in its museum. For two decades, the weapon was a museum piece while it was not sold at auction in 1977. The fate of the prototype is unknown. No other specimens available.

H. Lanstad attempted to combine the positive features of two classes of small arms, but failed. "Hybrid" was not viable due to the excessive complexity of the design and numerous technical and operational problems. Thus, the revolution in the field of small arms did not happen. However, it should be noted that the failure of the Norwegian project allowed to fill up the list of unpromising areas that should not be dealt with, and thereby contributed to the future success of gunsmiths.

Ctrl Enter
Noticed oshЫbku Highlight text and press. Ctrl + Enter
We are
Revolver Colt Cloverleaf House Model and its variantsRevolver RSH-12: “elephant” from Tula
33 comments
Information
Dear reader, to leave comments on the publication, you must to register.