January 21 2016
16
In the early fifties in our country several projects of creating heavy tanks. The result of these works was the beginning of serial production and operation of T-10 tanks (“Object 730”). Other projects of similar equipment for one reason or another did not receive the approval of the customer and, as a result, did not leave the stage of design work. In particular, such interesting projects as “Object 752” and “Object 777”, developed in SKB-2 of the Chelyabinsk Kirov Plant, remained on paper.


Recall that both new projects were developed taking into account important constraints, primarily related to the combat mass. Already in the late forties, it became clear that tanks with a mass over 50 t had no real prospects, and all new equipment should be lighter. Thus, in the requirements for promising heavy tanks, special attention was paid to the dimensions and weight of the structure. For example, when creating the project “Object 752”, the tank EC-3 was taken as a reference. In the case of the “777 Object”, the same reference point in terms of weight was the EC-8 (future T-10), the combat mass of which fit into the maximum allowable frame - 50 t.

Two new projects started in June 1952, in accordance with the order of the Ministry of Transport Engineering. The Chelyabinsk Kirov Plant ordered the development of a promising heavy tank that meets a number of requirements. The design was carried out by SKB-2 specialists under the guidance of M.F. Balgi At the beginning of 1953, he was replaced by PP. Isakov. Under the leadership of the new chief designer were all further work. He was also responsible for improving one of the developments at the later stages of the project. 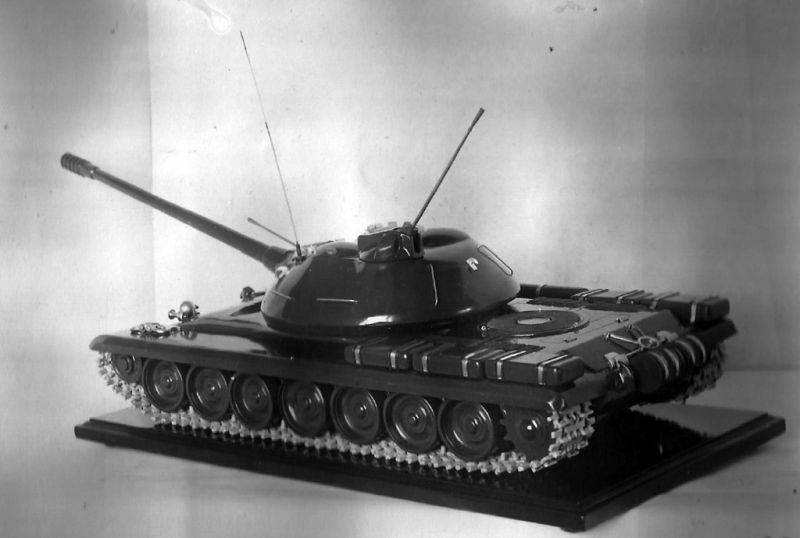 Model of the tank with the engine air cooling

At the preliminary stages of the project, several original ideas of one kind or another were proposed, which affected the further course of work. To study and verify all the original proposals that could not be combined into one project, the heads of SKB-2 decided to simultaneously develop two variants of a heavy tank. The 752 Object and 777 Object projects were supposed to differ from each other in a number of characteristic features and even in their design approach. For example, the “752 Object” was supposed to be completed with existing units, and for the “777” project it was planned to develop several new products, including an engine and transmission.

Sketch design of two variants of the tank was completed at the end of 1952 of the year. In the future, Chelyabinsk designers continued to develop projects and, by June, 53 had completed all the main work, which allowed submitting the necessary documentation to the Ministry of Transport Engineering.

Even before the project was divided into two separate directions, an original booking approach was proposed, designed to provide a high level of protection with the lowest possible mass. For this it was proposed to use an unusual variant of differentiated booking. Instead of the "traditional" armor plates and cast parts of different shapes, installed at different angles, the prospective tank was to receive a cast hull with units of variable thickness, as well as several rolled sheets. Due to the correct combination of the thickness and shape of cast parts, it was proposed to provide a relatively high level of protection with an acceptable weight. 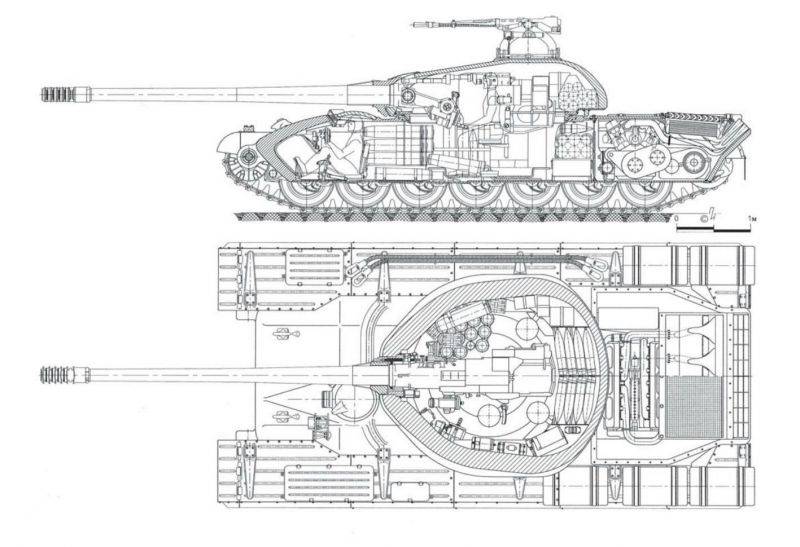 After the division of one project into two, the development of armored hulls was carried out in different ways. In the 777 Object project, it was decided to use a package similar to the 752 Object aggregates, but with some differences. Thus, the shape and thickness of the frontal part has changed. The maximum thickness of this part was reduced to 175 mm (against mm 215 at “752 Object”), and to maintain the level of protection, the angles of its individual parts were changed. Such improvements have led to a reduction in the weight of parts without loss in the level of protection.

The hull sides with thicknesses from 50 to 115 mm were thinner in the lower part, while the thicker upper ones were located with 62-degree camber outward, ensuring that acceptable volumes remain inside the hull. The aft part of the hull also had to be equipped with a cast piece of variable thickness, but its configuration depended on the type of power plant.

The “777 Object” and “752 Object” towers were similar, but differed in armor thickness and shape. With the help of the original differentiated booking, it was possible to maintain or even improve the level of protection by reducing the thickness of the tower forehead to 195 mm. At the same time, the thickness of the boards increased to 215 mm. According to reports, such armor could withstand the hit of German 128-mm anti-tank guns.

The project "Object 777" proposed to implement several original proposals related to the power plant. The engine should not be located along the hull, as in most tanks of the time, but across. Due to this, it was possible to reduce the length of the engine compartment to 2,1-2,3 m, depending on the type of engine and cooling system. For comparison, in T-10 this parameter reached 3,5 m. It was the reduction in the length of the engine compartment that allowed the combat compartment to be moved with positive consequences for a number of characteristics. 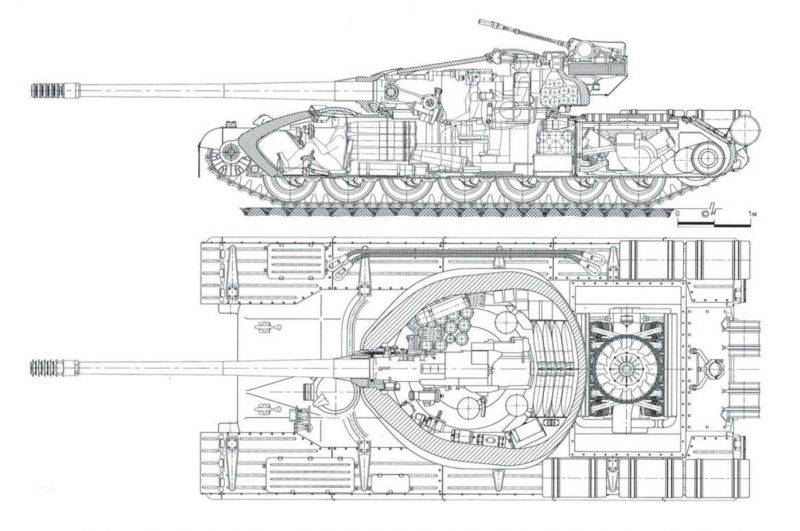 In the aft compartment of the prospective tank, a diesel engine with a power of about 850-900 hp should have been located. The creation of this product was entrusted to ChKZ Engine Design Bureau, which was headed by I.Ya. Trashutin. The engine with the symbol B-7 had to be manufactured in two configurations, differing in cooling systems. One version of the engine was to be equipped with air cooling, the other - liquid. Due to the smaller dimensions, air cooling was considered the most convenient and promising.

The aft section of the 777 Object was designed to fit the proposed engines. So, in the case of air cooling in the roof of the engine compartment a large air intake of the fan was provided. At the same time, the compartment roof consisted of a horizontal front sheet (with an air intake) and an inclined stern. When using liquid cooling instead of an inclined sheet, it was planned to install a radiator, which affected the size and shape of the stern of the hull.

With the engine had to mate a new seven-speed planetary transmission. These units also had to be developed from scratch, since the use of finished products was not considered expedient due to various factors.

The undercarriage of the tank was to be equipped with seven track rollers on each side, front guides and rear drive wheels. Several options have been proposed suspension, including torsion bar, hydraulic and hydropneumatic. The balancing of the tank, the increased number of road wheels and the suspension should have ensured a smooth ride. As a result, the accuracy of the fire in motion could also increase. 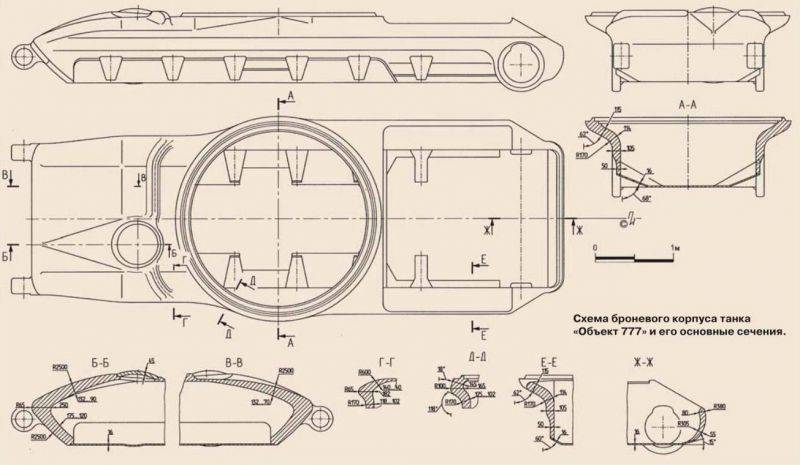 The main weapon of the advanced heavy tank was to be a threaded gun M62-T2 caliber 122 mm. This gun with a barrel length 46 calibers could use ammunition of various types of separate loading. The initial velocity of the shells ranged from 950 m / s (armor-piercing) to 1500 m / s (sub-caliber). In the fighting compartment there were several layouts on 40 shots. To save space, it was decided to abandon the loading mechanisms that were used on the "752 Object". Because of this, all operations for the maintenance of the instrument were assigned to the loader.

Inside the fighting compartment, it was possible to place the SG-43 machine gun of the 7,62 caliber, which was paired with a cannon. In addition, for protection against airborne targets, the prospective tank was to receive a KPVT anti-aircraft machine gun. One of the variants of the draft “777 Object” implied the use of a turret on the loading hatch, similar to that used on the “752 Object”. Another proposal concerned the creation of a remote-controlled installation. This unit was proposed to be mounted on the stern of the tower, and the control had to be carried out using the remote control in the fighting compartment.

The crew of a heavy tank was to consist of four people: a driver, a commander, a gunner and a loader. Like other tanks of a similar class of the time, the driver’s workplace was located inside the hull, and the rest of the crew were in the fighting compartment. In the case and the roof of the tower were provided three hatches, equipped with viewing devices.

Thanks to the new ideas associated with the layout and booking, the designers of SKB-2 managed to meet the weight requirements of the new machine. The combat mass of the “777 Object” was estimated to be 49,8 tons. Placing the turret in the center of the hull resulted in the same length of the tank with the cannon being turned back and forth - 9,8 m. The track width was 3,4 m - 2,1 m. The height of the line of fire is 1,6 m. Thus, despite the large mass, the “777 Object” turned out to be lower than the “752 Object” in the version with a swinging tower.

In June 1953, the Chelyabinsk tank builders handed over documentation on two new projects to the Ministry of Transport Engineering. In the last days of July of the same year, the Technical Department of the Ministry issued new guidelines for new projects. The development of the “752 Object” seems to have stopped, and the “777 Object” should be reworked. According to reports, industry management demanded a change in the layout of this machine, but the details of this work are unknown. The surviving information and materials on the updated project does not allow to establish exactly how the project has changed. 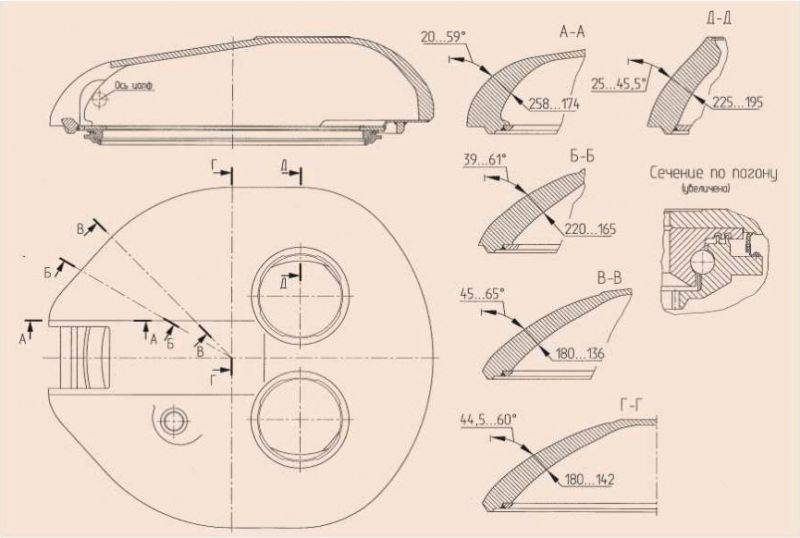 Also at that time, work began on a prospective centrifugal air cleaner, an prototype of which was soon built and tested within the framework of the 777 Object project. In addition, several pilot suspension units based on hydraulic and hydropneumatic systems were tested. Finally, after the disposal of the Technical Directorate, the production of a new tank on the 1: 10 scale began.

At the end of December 1953, the updated project documentation was again transferred to the Ministry of Transport Engineering. The results of the new study of the project by experts are unknown. In the future, according to available data, SKB-2 of the Chelyabinsk Kirov Plant continued to work on creating a new project for some time, but it could not even bring it to the construction of an experimental armored vehicle. Roughly in 1954, all work on the “777 Object” was discontinued due to the lack of prospects.

According to available data, the creation of a promising tank stopped at the stage of refinement of the original project. Before the work was completed, Chelyabinsk specialists, as well as employees of related organizations, had time to build and test several prototypes of various equipment, as well as produce a large-scale mock-up of the tank. Construction of a full-fledged tank did not begin and, apparently, was not planned.

It can be assumed that the fate of the 777 Object project was adversely affected by its complexity associated with the use of various new components and original ideas, such as a non-standard case design, engine air cooling system, etc. Thus, the prospective tank fully complied with the requirements of the customer, but was too complex for mass production. As a result, it was decided to abandon the development of a completely new heavy tank, focusing on updating the T-10 machine, already brought to mass production.