January 20 2016
7
Wheeled armored vehicles are traditionally inferior to tracked in quantitative terms. Nevertheless, during the last decades, attempts to promote wheeled armored vehicles for various purposes have been made regularly. Among other things, anti-tank self-propelled artillery mounts on wheels were also developed. So, in the early forties in the United States were developed projects SAU T55 and T55E1.


From the end of the thirties, the American company Cook Brothers was actively involved in the development of high-wheeled vehicles. The result of these works was the emergence of several experimental samples of equipment for various purposes. In the autumn of 1941, the project of a promising multi-purpose armored vehicle with a wheel formula 8х8, which could be used as a protected vehicle, was closed. This project did not interest the military, but became the basis for the next development. Soon after its closure, Cook Brothers engineers began preliminary work on a specialized machine based on this transport.

General view of the prototype T55

The aim of the new project was to develop a promising self-propelled artillery mount capable of moving on various surfaces and providing fire support to the advancing troops. First of all, it was supposed to use the machine as a fighter tanks. The project received the working designation T55. The contract with the military department for the development and construction of the prototype was signed on August 1, 1942.

The project was based on non-standard ideas that affected the design of the machine. The T55 ACS was an original wheeled armored vehicle with an 8x8 wheel formula and an artillery gun in front of the hull. Some layout solutions were borrowed from previous projects, but the new designation and armament led to noticeable differences.

Non-standard self-propelled gun had the appropriate layout. In front of the case were placed some transmission units transmitting engine torque to the front axles, as well as the control compartment. The central part of the corps was given under the fighting compartment with the jobs of the crew members responsible for the use of guns and machine guns. Aft compartment allocated for the power plant.

The armored hull of the T55 had the original form. Its nose was formed by two curved side elements, between which there was a large recess to move the gun. In the back of the right element was located the hatch of the driver. The driver’s workplace, in turn, was under this sheet. Between the curved elements provided armor mask guns.

Behind the frontal elements were vertical sides of a variable height. Their front part, covering the combat compartment, was higher than the back, located next to the engine compartment. The stern consisted of a vertical central sheet with a grille and a pair of curved side elements. A curious feature of the hull's stern was the use of spaced booking. The power plant was located inside a relatively narrow casing, and the outer sides formed additional boxes for the transportation of property. The fighting compartment of the car did not have a roof. From above, only the engine compartment was closed. In addition, a relatively small sheet with a ring turret for a machine gun was envisioned before it.

The SAX T55 power plant consisted of two Cadillac V-shaped gasoline engines with an 130 horsepower Xp. The engines were linked to an automatic transmission, which included a gearbox, transfer boxes and other units. The task of the transmission used was the distribution of torque to all eight driving wheels. 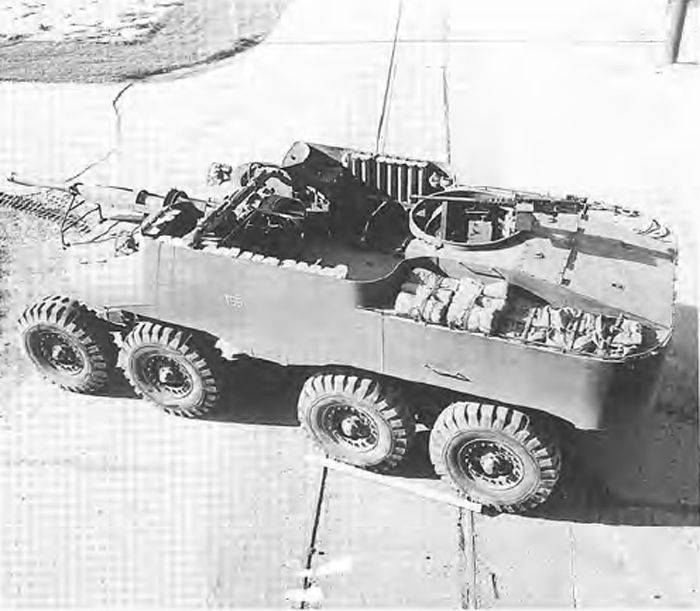 Top view, visible layout of the internal volumes of the case

Chassis self-propelled gun had eight wheels with suspension based on leaf springs. All axles were associated with the transmission, and the first two axes were equipped with control mechanisms, which made it possible to improve handling and maneuverability.

An 3-inch (76,2 mm) M7 cannon was placed in the front case installation. The installation of the gun made it possible to carry out horizontal guidance within 30 ° to the right and to the left, vertical guidance angles from –11 ° to + 18 °. Such large sectors of guidance, not least of all, were associated with the design of the frontal part of the hull, which did not interfere with the movement of the trunk. Inside the fighting compartment, we managed to place several racks with a total capacity of 90 shells.

In the stern of the fighting compartment, an elongated roof of the engine compartment, on which the ring turret for the machine gun was located, was provided. As an auxiliary weapon it was proposed to use the machine gun M2HB caliber 12,7 mm. The design of the turret allowed to fire in any direction and attack both ground and air targets. 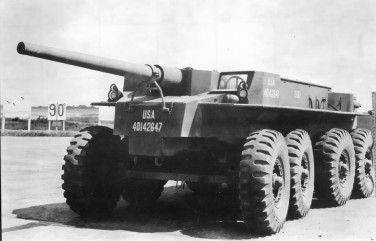 The crew of the car was to consist of four people. The driver was located in front of the hull, and in the fighting compartment were the commander, gunner and loader. If necessary, they also had to use a machine gun on the turret.

Using existing ideas and solutions, the designers of Cook Brothers completed the development of a new project as soon as possible, after which the construction of an experimental self-propelled gun was launched. According to some reports, the company-developer could not build an armored vehicle on its own, which is why it had to turn to outside organization for help. Thus, the assembly of an experimental ACS T55 involved the company Allied Machinery Manufacturing. Construction was completed in the late fall of 1942. 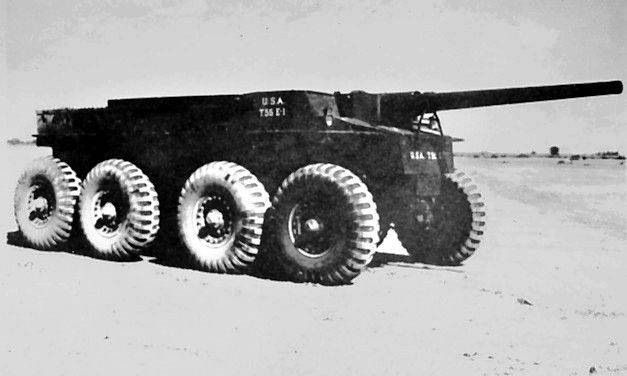 In December, the 42-th experienced self-propelled gun of the new type came to the test. During the tests, the car showed the ability to reach speeds of up to 50 miles per hour (about 80 km / h) and to overcome more than 200-220 km at a gas station. There was the possibility of overcoming various obstacles. In addition, the sealed hull allowed the car to float by turning the wheels.

Experienced ACS T55 tested in parallel with the semi-tracked machine T49, armed with 57-mm anti-tank gun. According to some parameters, the wheeled self-propelled gun was ahead of the competitor, on the other it was losing to him. After analyzing the test results, the software company decided to refine its car. A number of new ideas and solutions were proposed, which made it possible to enhance certain characteristics, as well as more fully meet the requirements of the customer. The updated version of the project was named T55E1.

During the processing of the project, a large number of components and assemblies, primarily the hull, underwent major changes. It was decided to abandon the relatively wide body with a large number of curved parts. Instead, a body was proposed consisting of flat sheets of various shapes and sizes. As a result, the T55E1 machine received the frontal part of the characteristic chopped form, behind which was a wider box of the fighting compartment. In view of the reduction in the width of the car, wing panels were provided on the sides. An important feature of the new project was the overall reduction in height due to a more dense layout of the hull units and a smaller height of the sides.

In connection with the processing of the hull to a certain extent, the layout has changed. So, the workplace of the mechanic-driver moved to the left side and turned out to be inside a single habitable volume in the combat compartment. The starboard, in turn, provided for aiming devices and the gunner’s workplace. The commander and loader remained in the old places. 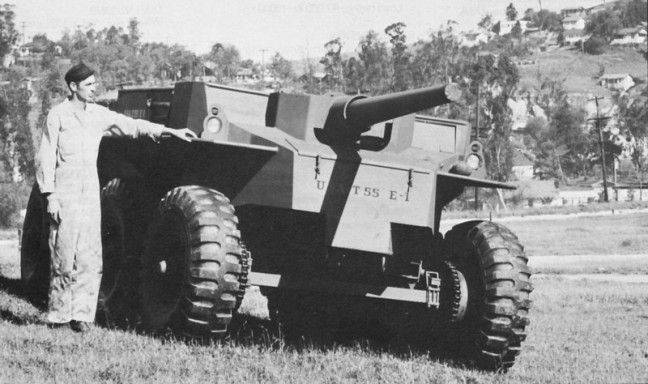 Reducing the dimensions and reducing the weight allowed to change the composition of the power plant. In the aft T55E1 installed two engines "Cadillac" power 110 hp The composition of the transmission and chassis in general remained the same. Like its predecessor, the T55E1 was a four-wheel drive four-wheel drive vehicle with four front steering wheels.

Armament updated car remained the same. The 3-inch M7 gun remained in the frontal installation, and the M2HB machine gun on the stern turret. A change in the frontal part of the hull led to a reduction in pickup sectors: the horizontal was reduced to 20 ° from the axis, and the vertical was now from -10 ° to + 15 °. Peculiarities of the machine gun pointing, apparently, have not changed. 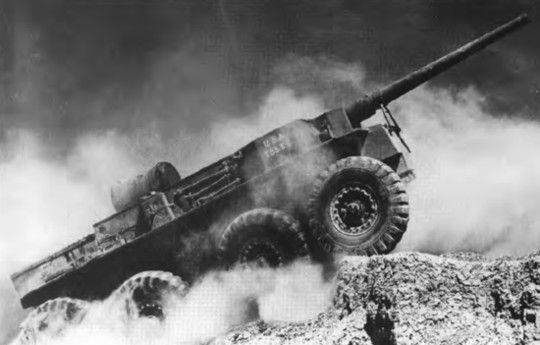 The prototype ACS T55E1 was built at the beginning of 1943, after which it was put to the test. The machine successfully coped with the main tasks, confirming the declared characteristics. So, thanks to the weight reduction, it was possible to bring the maximum speed to 60 miles per hour (about 95 km / h), power reserve - 240 km. The armored vehicle could climb the 37-degree slope, climb a wall about 1 m in height and overcome water obstacles to the depth of 0,9 m.

The upgraded self-propelled artillery installation T55E1 showed good results. A sufficiently successful chassis ensured good mobility, and the gun made it possible to successfully attack and destroy various types of enemy armored vehicles. However, the troops decided not to adopt such equipment. By the beginning of 1943, the command of the US Army came to the conclusion that it was necessary to abandon all-wheeled vehicles. In this connection, the project T55E1 was closed on 1 on April 1943 of the year, as having no real prospects.

According to some reports, in 1943, one of the built prototype vehicles was able to take part in the hostilities. There is information about sending one ACS to Tunisia for testing in real conflict. In the army, the car received the unofficial nickname Cook Interceptor (“Cook Interceptor”) and, in general, performed well. The wheel suspension with the original suspension ensured high mobility both on the highway and in conditions of North African off-road. Self-propelled gun could quickly arrive in the specified area and meet the enemy with artillery fire.

Lateral projection of the second prototype

Despite successful pilot operations in the military, the military decided not to favor T55 / T55E1. The army decided to build all new self-propelled artillery installations on the basis of the existing medium and light tanks. Thus, the Cook Brothers T55 project did not fit into the development strategy of the armed forces and therefore was closed due to the lack of prospects.

However, no longer needed prototypes were written off. For some time, the two cars built were used as platforms for conducting various studies related to the design of the undercarriage of military equipment. Such studies have allowed Cook Brothers to develop several new designs of original wheeled vehicles with non-standard chassis. Performing the functions of an experimental technique, the T55 and T55E1 machines developed their life, after which they were written off and disposed of.