French Chamelot revolver - Delvigne of the 1874 model of the year 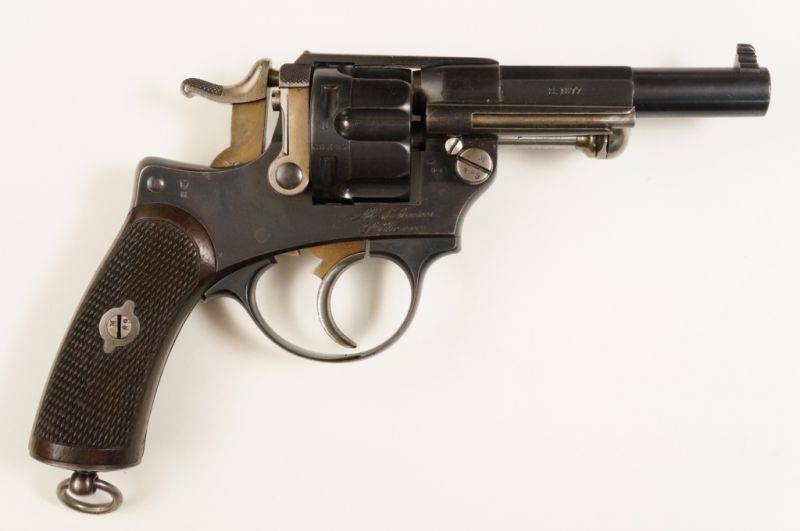 After adopting the Chamelot - Delvigne revolver Model 1873 revolver into the French army, it was decided to make a lightweight version of this weapons.

The revolver was to become the personal weapon of army officers, who traditionally preferred weapons that were different from ordinary soldier or non-officer models.

The officers wanted a more modern and elegant weapon. Such a weapon was the Chamelot revolver - Delvigne model 1874 of the year, caliber 11 mm (11 × 17 mm R). 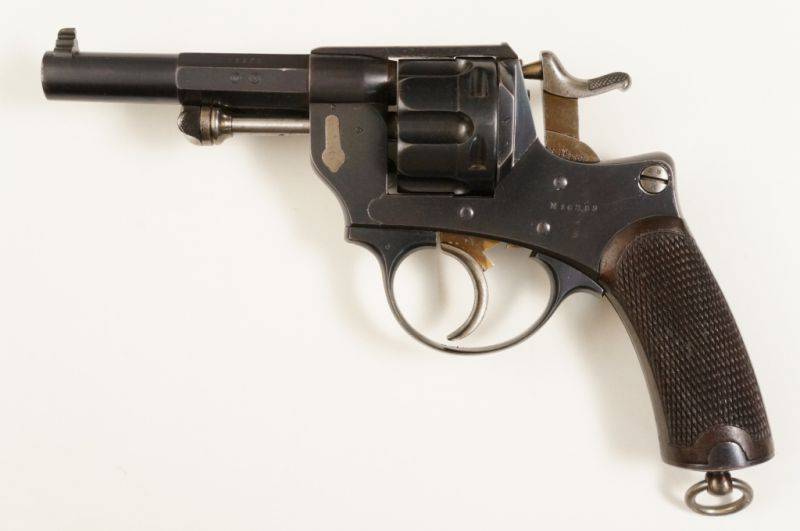 October 31 1874, the company Mre d'Armes St Etienne receives an order for the manufacture of Chamelot revolvers - Delvigne M 1874 for the officers of various military units. 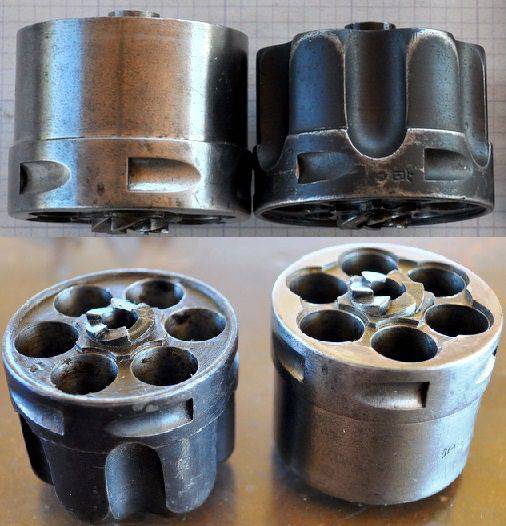 One of the significant external differences of the 1874 model's revolver of the year was the presence of grooves on the outer surface of the drum. In addition, the drum was shorter than the drum of the 1873 revolver of the year. In the back section, metal was removed not only under the edges of the liner, but over the entire surface, with the exception of the side along the contour. All this reduced the weight of the weapon. 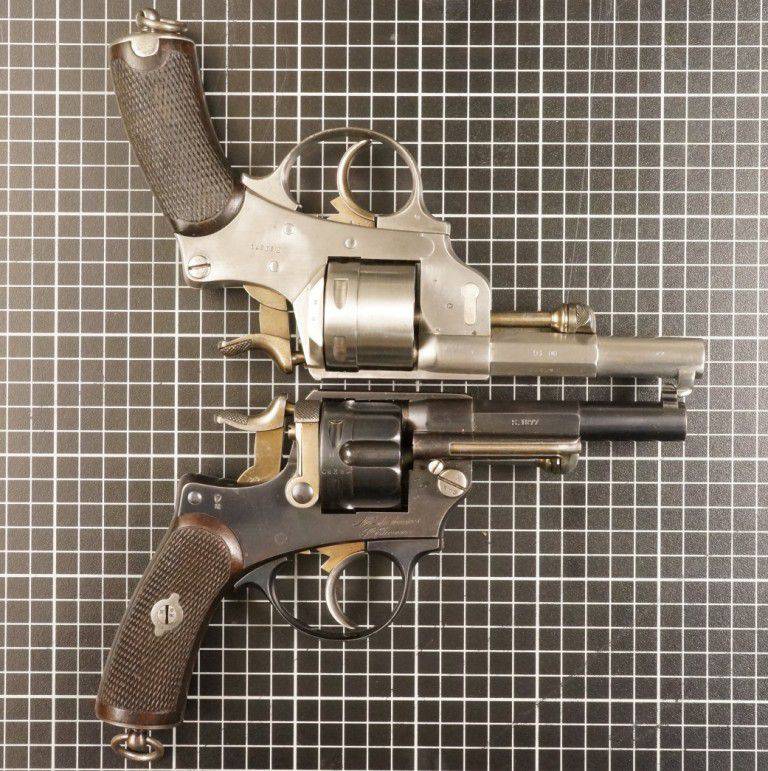 When comparing the frame of revolvers, it can be seen that the frame of the Chamelot-Delvigne revolver of the 1874 sample of the year is shorter than the frame of its predecessor. 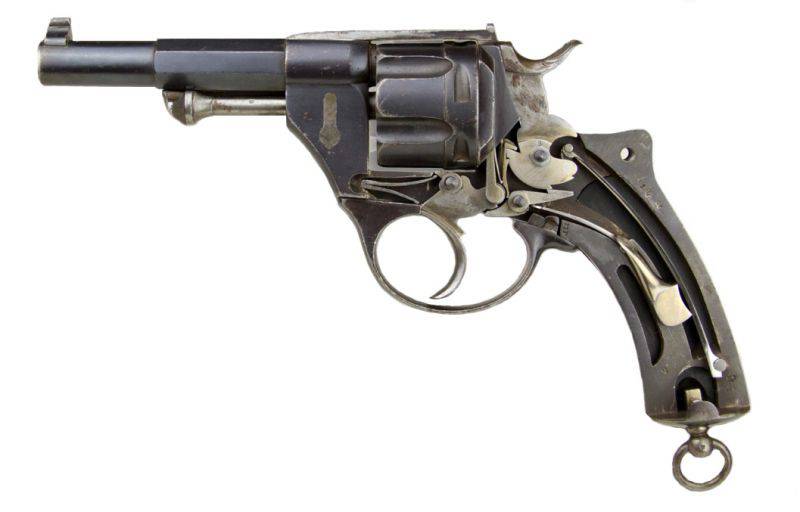 To facilitate the mass of the weapon, through grooves were made in the handle of the revolver, at the location of the mainspring and in front of it. 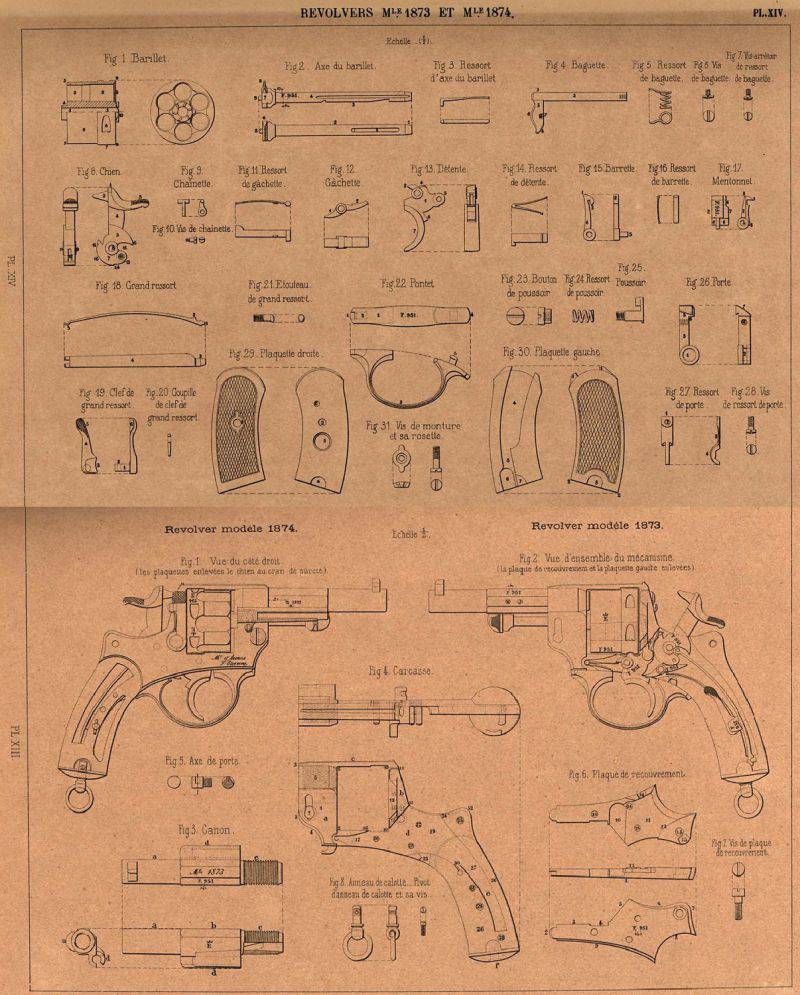 Graphic appendices to the technical documentation of the end of the 19 century show the device of Chamelot revolviers - Delvigne of the 1873 and 1874 model of the year and their difference from each other.

Perhaps another significant difference Chamelot - Delvigne revolver Model 1874 was the additional protection of the metal surfaces of the weapon by bluing. 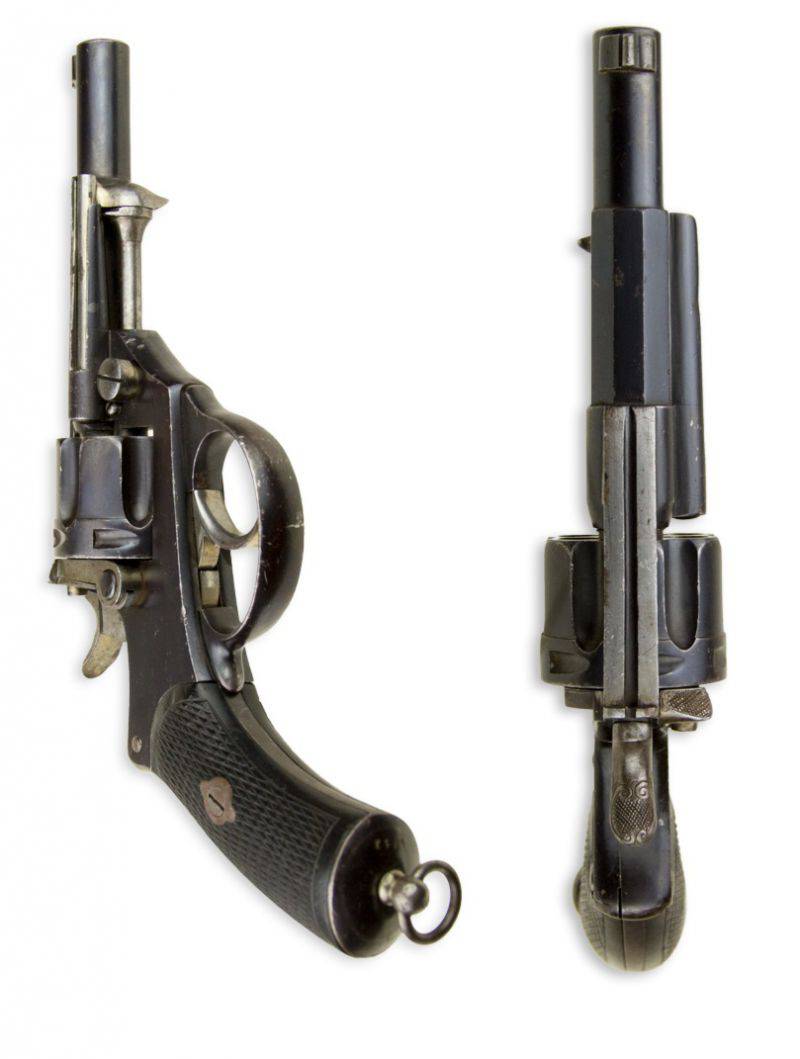 Sights consist of a fixed slit pillar and a fixed front sight. The handle cheeks are made of walnut and are attached to the frame as in the 1873 model of the year. In the lower part of the handle there is a ring for fastening the revolving strap. 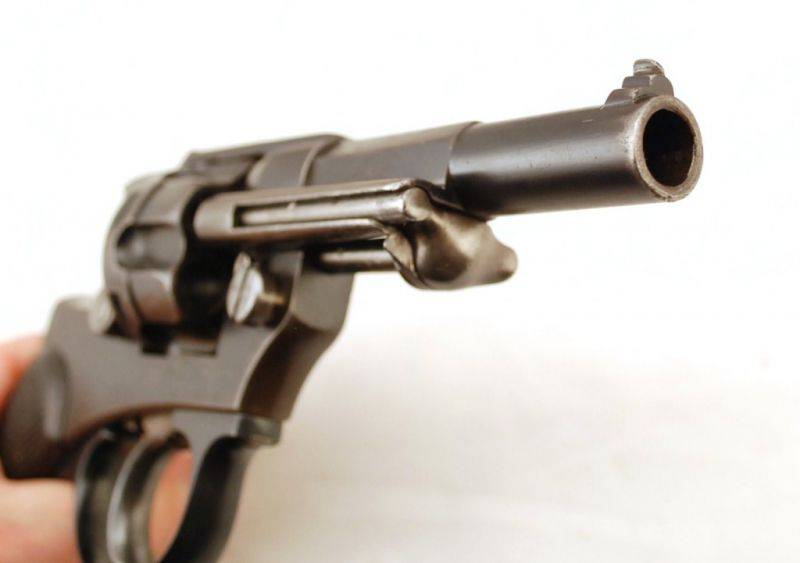 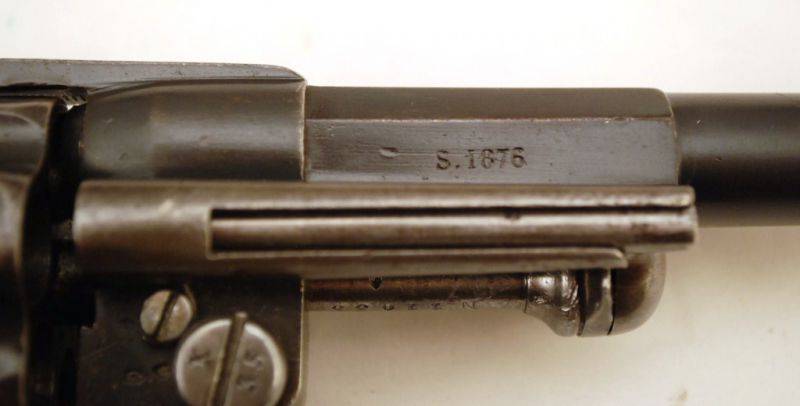 On the right side of the barrel indicates the year of issue of the weapon "S.1876". 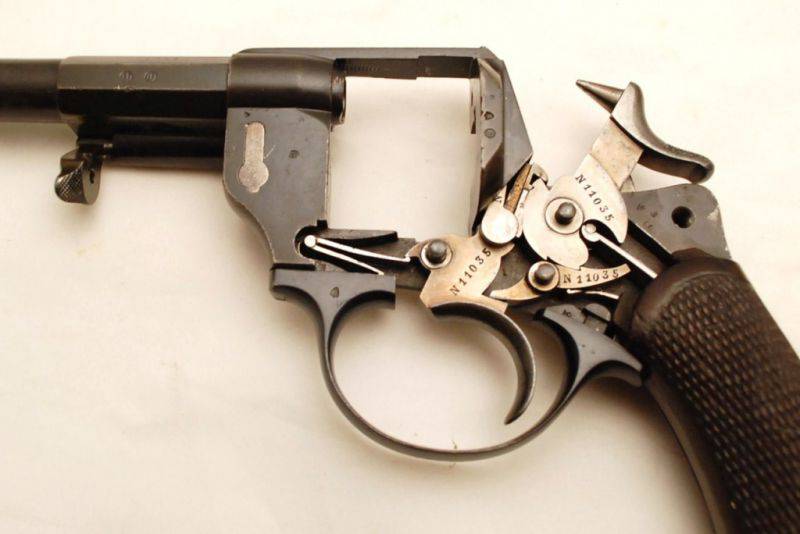 The serial numbers are marked on the parts of the firing mechanism. 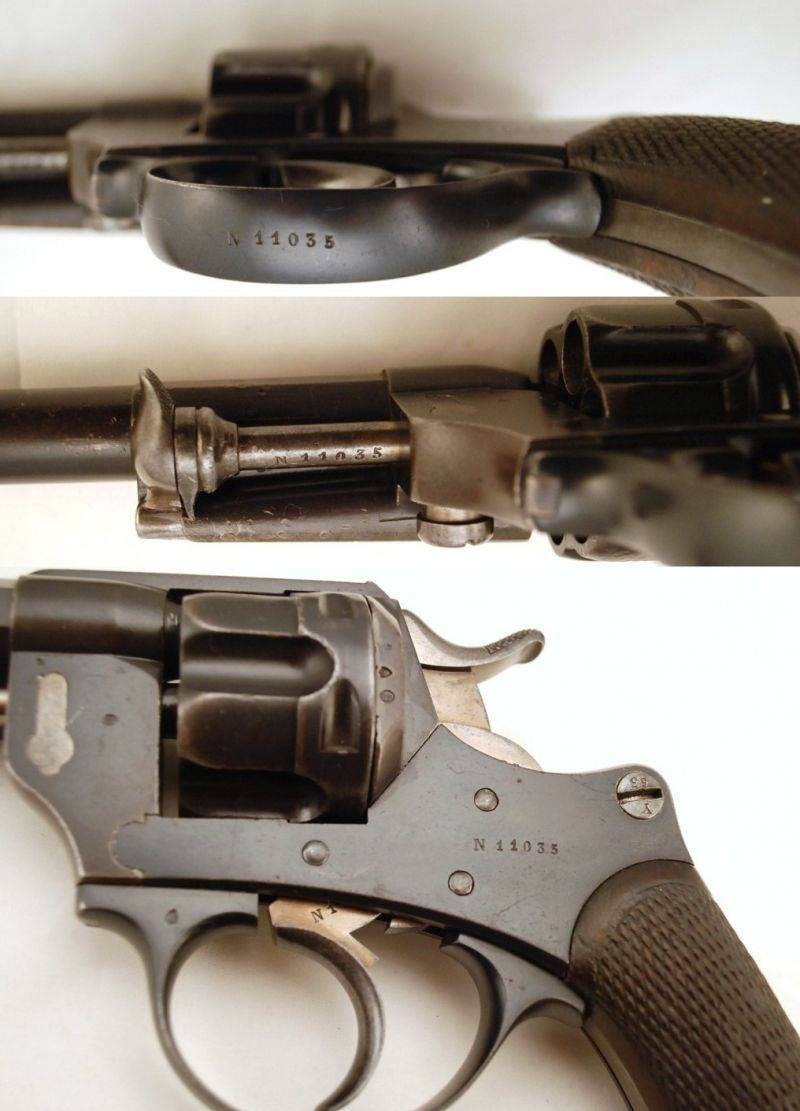 Serial numbers are also marked on the frame of the weapon, the axis of the drum, the trigger guard. The serial number of the Chamelot revolvers — the 1874 sample of the year, begins with the letter “N”. Short numbers that consist of one letter and the last two digits of the serial number are printed on some screws, the inner surface of the trigger guard, inside the handle on the spring retainer, on the drum door and inside the frame cover. 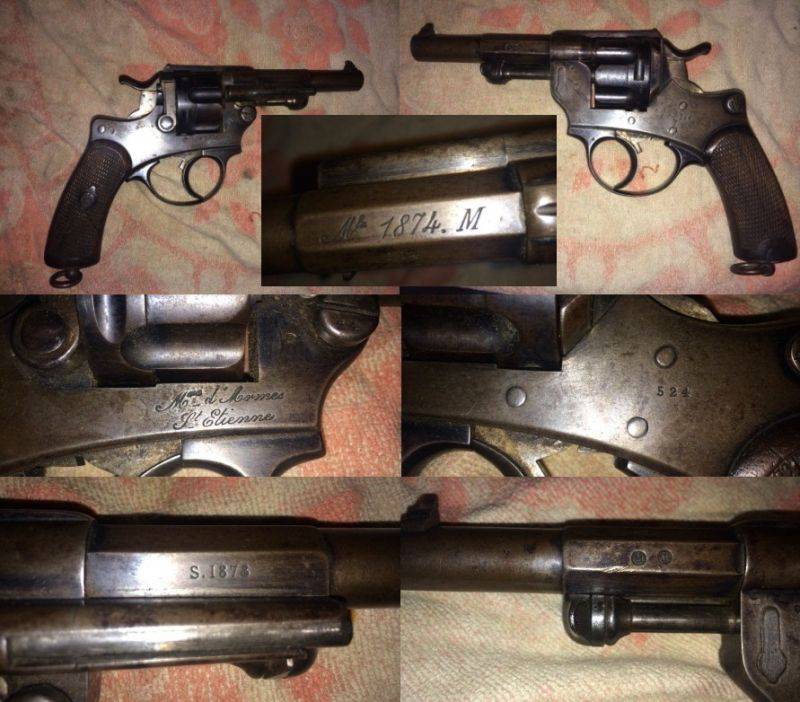 The revolver of the 1874 model of the year was of the marine variety. Weapons differed caliber, it used 12 mm cartridge. The marking of marine revolvers should be attributed to the presence of the letter “M” (“Modifié” - the caliber upgraded to 12 mm) on the faceted part of the barrel after the text “Mle 1874”. The serial number on the details of the weapon without the letter designation. The presence of markings in the form of an anchor, in contrast to the marine version of the 1873 revolver, cannot always be seen on the handle of the revolver or other parts of it. A total of 1316 pieces of marine model revolver model 1874 of the year were manufactured. 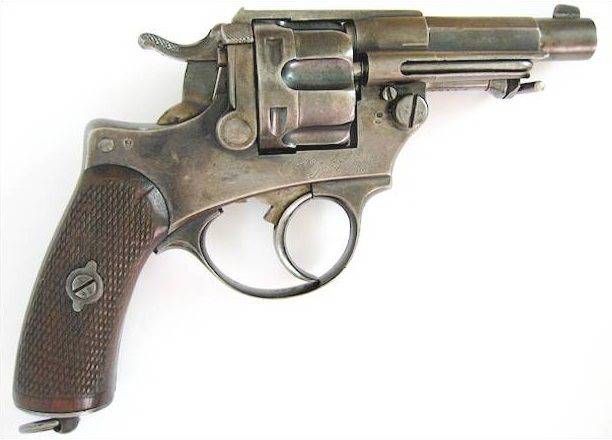 Revolvers 1874 model year for commercial purposes in addition to the 11 mm, 12 mm and other calibers were produced. 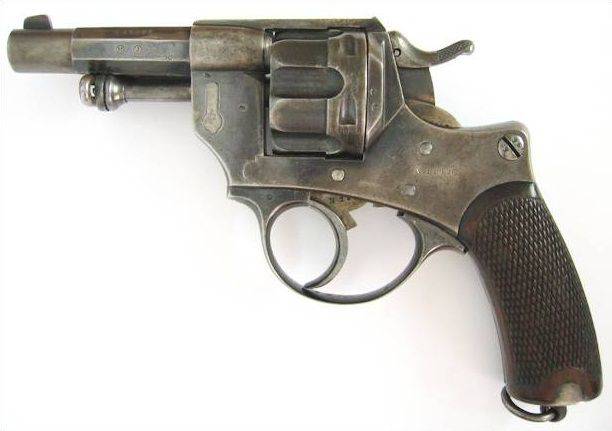 Here is an example of the Chamelot revolver - Delvigne M 1874, which is made for Flaubert's cartridge, caliber 6 mm. 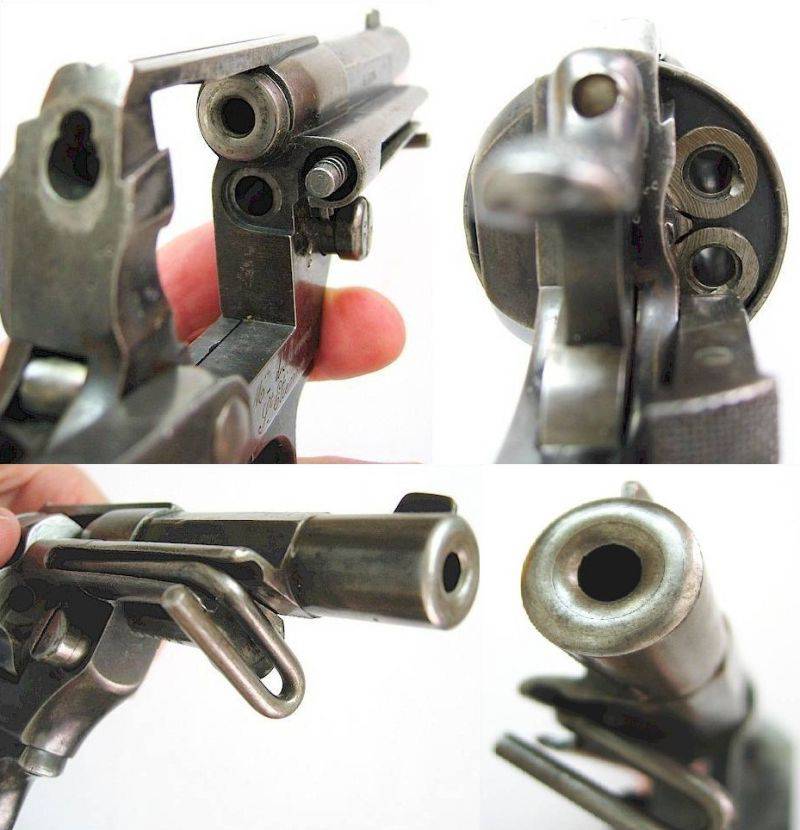 In contrast to the converted revolvers, in this weapon, the quality of manufacture indicates that this weapon was originally produced under the patron Flaubert, and not subjected to modernization. 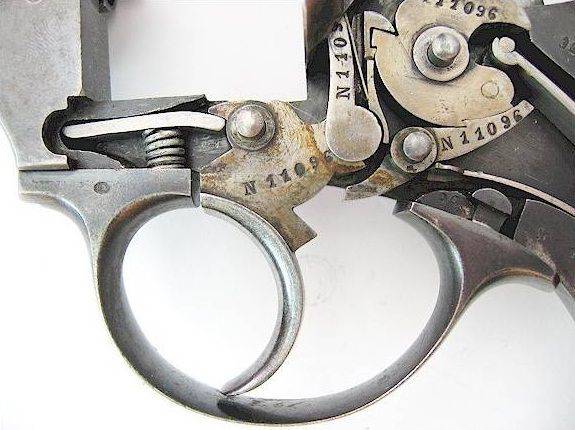 All the serial numbers of the revolver correspond to each other and have the usual letter “N” in front of the number, just like the serial army revolvers. At one of the European auctions, weapons were rated at 800 euros. 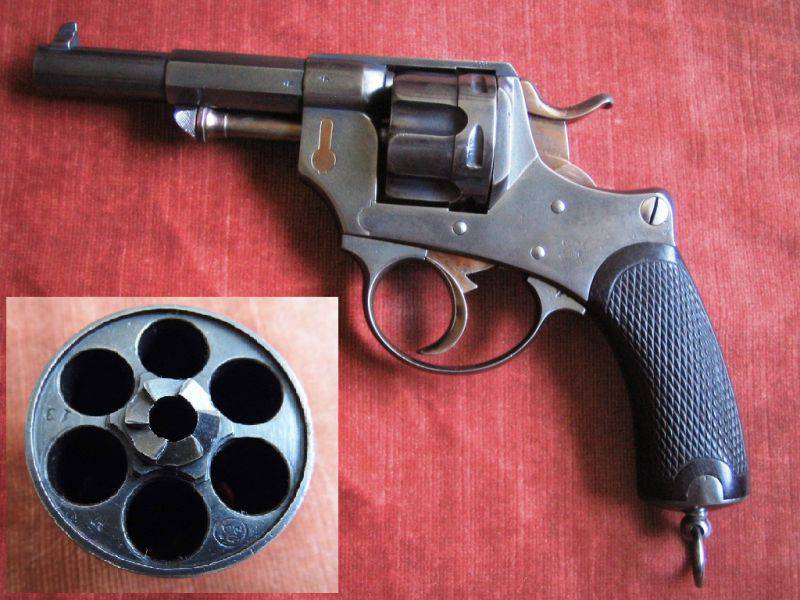 In addition to the company Mre d'Armes St Etienne, the revolvers of the 1874 model were commercially produced by other manufacturers. The photo shows a weapon made in Belgium, as evidenced by the Liege stamps on the drum and the frame of the weapon. 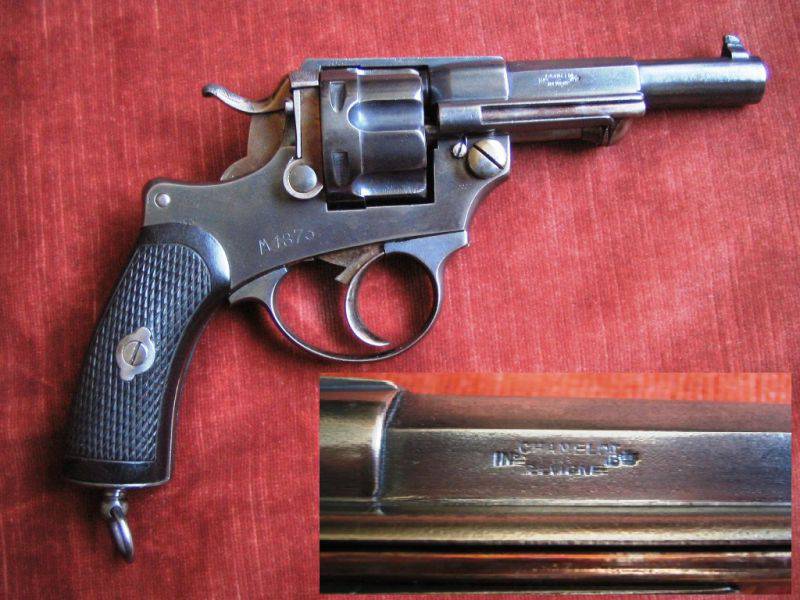 The cost of weapons released in Belgium, in contrast to the French, was lower and perhaps the Belgians were simply subcontractors when fulfilling a commercial order. For some reason, the revolver presented in the photo is marked on the right side of the frame “1873”. On the right side of the barrel there is the stamp “Invention Brevetée Chamelot et Delvigne” (the patented invention of Chamelot Delvigne). 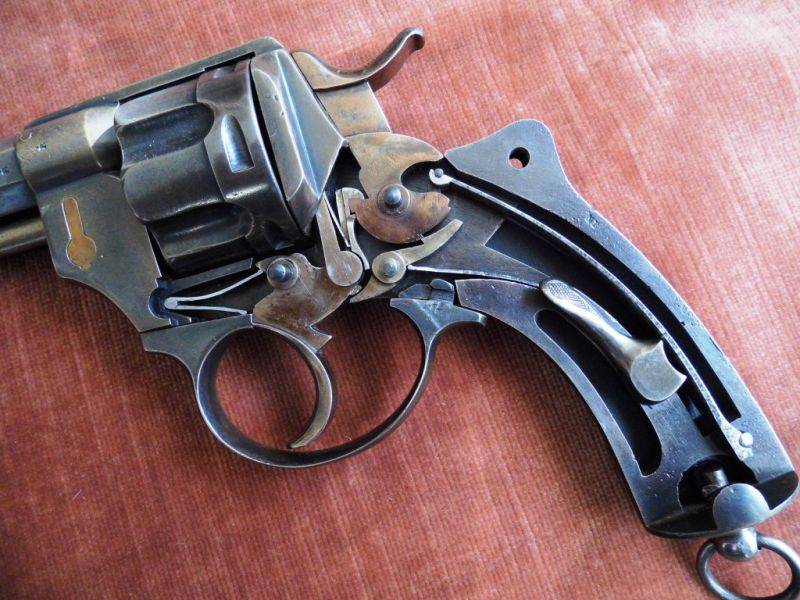 Serial numbers on the details of the trigger mechanism of this revolver are missing. 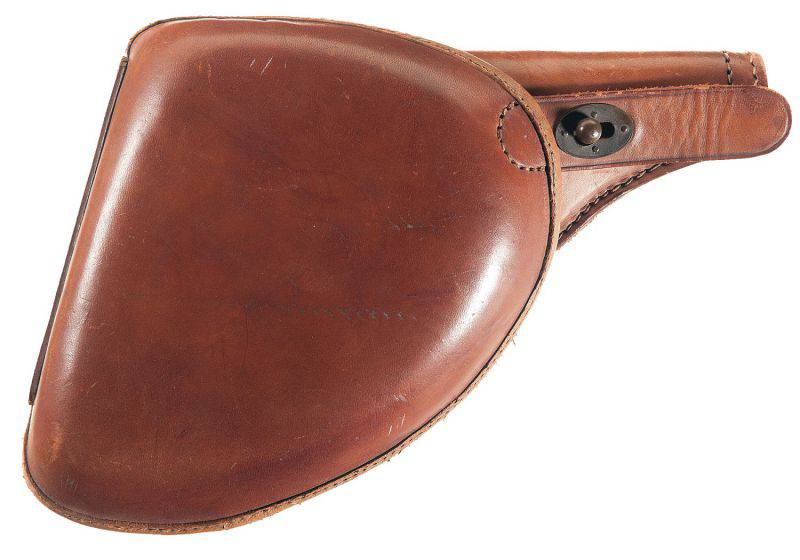 For the Chamelot army revolver, model 1874, a leather holster was produced, which was of higher quality than the model 1873, because the weapon was intended for officers. 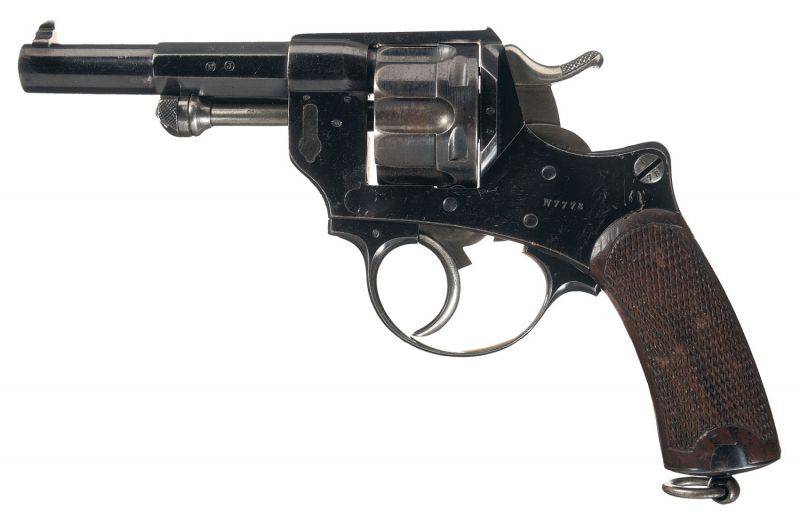 The French 1874 revolver of the year was produced in the period from 1875 to 1886 year. The weapon had the same drawbacks as the 1873 model of the year, the main drawback was the weak cartridge used in the revolver. A total of 35174 revolvers were released, including the naval version of the weapon.

The cost of weapons in the antique market is not very high and usually does not exceed 700-800 dollars.