MIC RF in 2015 year: sanctions and the crisis is not an obstacle 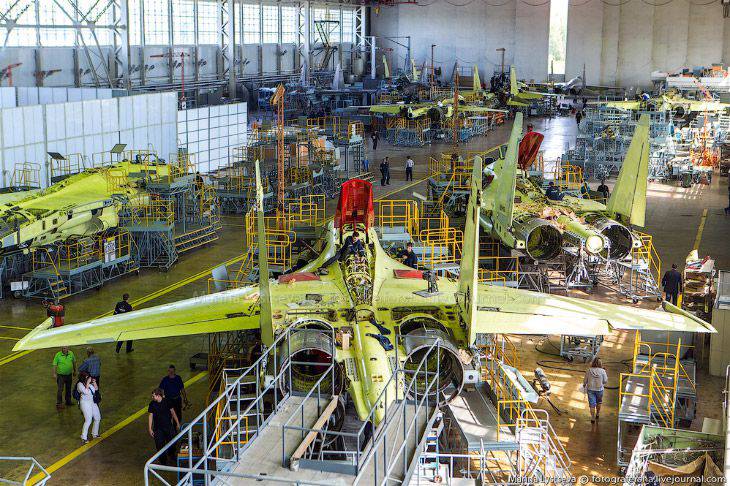 2015 ended the year, which means it’s time to take stock of the work of the Russian military-industrial complex and compare them with the results of last year. According to the Ministry of Defense of the Russian Federation, in the framework of the state defense order this year, more military equipment was supplied to 7% than in the past, and the supplies themselves were made to 96% (95% in 2014). For a more complete picture, it is necessary to pay attention to certain categories of military equipment.

In 2015, the Russian Aerospace Forces (VKS) received an 243 airplane and a helicopter - this is slightly less than in the 2014 year, then the troops received 277 aircraft. It should be borne in mind that this figure also takes into account the equipment that has been upgraded, and not just built from scratch. If we take only new products, last year VKS received a record number of aircraft - 108 units.

More: The release of military aircraft in Russia caught up with the Soviet Union 1980-s and overtook the United States

This year, counting some complexity; less information: for sure you can talk about supply 18 multifunctional fighters Su-30SM, 4 Sioux 30M2 (in 5 plans, the possibility of opening information is incomplete), 18 bombers Su-34 (2 over the plan), not less than 6 Su-35 (although their plan was 14, it is possible that no part of the official information was transmitted), no less than 6 light MiG-29CMT (R) / UB (R) fighters (possibly 8), 12 training - combat fighter Yak-130, 1 military transport aircraft IL-76МД-XNUM XA, 90 AN-1 − 148E (possibly 100). In total, these are 2 − 66 airplanes. That is, even in the most favorable case, the number of machines released on 78 is less (by 30% less). The reasons for this are different: the contracts for Su-27С (the new contract for 35 aircraft has not been signed yet) and the deck MiG-48K ended, the An-29 and An-148 aircraft produced without cooperation with Ukraine are problematic, for the Yak-140 there were some difficulties with fast import substitution. Nevertheless, the result is still not bad, given the economic problems and the issue of establishing the production of local components.

As for helicopter technology, there are fewer detailed data this year, however, apparently, the number of helicopters produced has not changed much. As for the modernization of the existing technology, then its pace remains high.

In the 2015, the “nuclear triad” received 35 intercontinental ballistic missiles (ICBMs) - of them allegedly 24 land-based RS-24 “Yars”, and the rest - P-30 “Bulava”, which are equipped with submarines of the 955 “Borey”. Last year, 38 ICBMs were built, of which 16 Yarsov and 22 Bulava. Thus, there are no problems or significant changes in this area - not a single country in the world is even close to such indicators. While maintaining the current pace by the 2022 year, only modern ICBMs will be in service with the Russian Federation.

Along with the construction of new ICBMs, the strategic forces also received upgraded bombers - 2 Tu-160М, 3 Tu-95MS and 5 Tu-22М3. The Navy also received two 955 "Borey" submarine missile carriers, carrying the Bulava ICBM along the 16.

Production and modernization of land equipment remained at about the same level as last year, for example, 2 brigade sets of Iskander-M missile systems were still received. In total, up to 1172 units of armored vehicles were modernized and built (Tanks, Infantry fighting vehicles, armored personnel carriers, armored vehicles), 148 missile and artillery systems and up to 2292 vehicles. The main novelty was the new generation of armored vehicles, the pre-production parties of which were shown at the Victory Parade on May 9 in Moscow. The T-14 tank and the heavy T-15 BMP created on the Armata tracked platform, the BMP and BTR on the basis of the Kurganets-25 tracked platform, the Boomerang wheeled armored personnel carrier, the Coalition-SV 152-mm self-propelled howitzer were demonstrated .

More: New armored vehicles of the Victory Day: the basis of the Land Forces of Russia for half a century

Military shipbuilding - the most vulnerable industry

In addition, state tests of the 11 356 “Admiral Grigorovich” patrol ship of the 2016 2016 project were completed. Two more ships of this type will be commissioned in the 3 year. But there is a big problem with them - the Ukrainian power plants were installed on the ships of this project, so the fate of the XNUMX ships under construction is somewhat vague, although they decided to resume their construction.

In general, the Navy may be affected by the economic crisis and sanctions most of all: the industry was in a very difficult condition, large surface ships were not built for many years, so the budget will probably be saved by shipbuilders. Quite a difficult problem is the dependence on the Ukrainian and German power plants, which now can not be purchased.

The main conclusion is that Western sanctions and the economic crisis in 2 have not been able to fundamentally affect the military-industrial complex of the Russian Federation - some problems have emerged in certain industries, many of which have already been resolved, while others must be resolved (for example, nothing “incredibly” difficult in the production of analogs of the Ukrainian shipboard power plants in the Russian Federation there is no, simply because these are Soviet developments, thus it is a matter of time). However, the next 2 − 3 years will be very revealing - primarily because of problems in the economy. The primary task for the military industrial complex is to execute the state armaments program up to the 2020 year. Just the results of 2016, 2017 and 2018 will demonstrate to us whether the Russian defense industry can withstand the pace it has taken. In addition, it is necessary to actively work on the state armaments program until 2025 of the year (its adoption is postponed due to the unpredictable economic situation in the country).

Ctrl Enter
Noticed oshЫbku Highlight text and press. Ctrl + Enter
We are
Projection of forceThe first results of the exhibition IDEX-2013
76 comments
Information
Dear reader, to leave comments on the publication, you must to register.