January 11 2016
57
As is known, the oldest daggers were made of stone. These could be flint or obsidian tips with a barely sketched grip, which could, if desired, also be used as a spearhead. In Denmark, a knife was already found with a clearly outlined handle, and one of the later samples, found in Sweden, generally imitates a bronze dagger and dates from around 1600 BC.

Bronze Celtic Dagger. Approximately 1200 BC. The blade is cast together with the handle, the latter has an anthropomorphic form. Such handles are known, like those of daggers and swords, but with which such a form is connected is unknown. Metropolitan Museum, New York.

However, why be surprised? In the Museum of Mexico, you can see the ritual knives for human sacrifice from obsidian, decorated with turquoise and gold. Probably could have made a golden dagger. After all, the Egyptians did them, but ... they left obsidians, it is sharper. The emperor Geliogabal in Rome, however, ordered gold swords for himself in order to kill himself in case of an attempt, but he did not manage to use them. 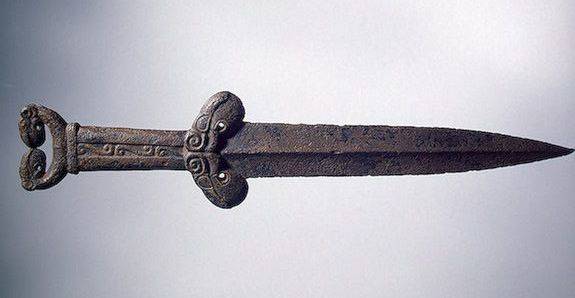 Dagger Tagar culture, V century. BC. Draws attention to the technology of making a dagger. The iron blade, but the handle is cast from bronze in the famous "animal style." State Hermitage, St. Petersburg.

And here it is important to note one curious fact: cold weapon with a short blade, over time, it began to be decorated much more abundantly than a long blade. Of course, we can find both richly decorated Turkish and Indian sabers, and Japanese swords, yes, of course, but the richly decorated daggers are more at times. Why is it so clear! The more often we use, then decorate. In the novel A.P. Chapygin "Razin Stepan" imperial detectives conspire to seize Stepan in call, that is, in the outhouse. “It’s not possible to climb a saber with a saber!” The clerk gave instructions to them, that is, it was uncomfortable to walk with a saber, I had to take it off, which was also inconvenient. But since the times were harsh, and people needed weapons all the time, they took the daggers with them, which they began to decorate richly, in addition to emphasizing their social status.

For comparison - the Indian dagger also with a slotted blade of the XVIII century. The decoration used jade, gold, rubies, emeralds. For the length of the 43,18, see Metropolitan Museum, New York.

And another dagger and blade with a slot - also India and also the XVIII century. Shark leather, gold, rubies, emeralds, sapphires, silver. The length of the blade 16,5, see Metropolitan Museum, New York.

At the same time, different forms of blades and methods of finishing handles and scabbards were developed in different countries. And if earlier the same Romans looked at weapons as a very functional object and no more, then over time it turned into an object of art, a means of capitalization and ... PR. We read R. Kipling's novel “Kim”: “Sahib gave me a gard sword, and she blushed from the blood of my brother,” says one of the characters there. That is, an Englishman-sahib made an expensive gift to him, well, well, it was worth it - to fight with someone else’s hands on a beautiful tsatsku is the most correct method, however. That is, if a person is stupid, then why not take advantage of this? From here, by the way, the custom of giving a weapon takes place: it was given by kings, kings, emperors, shahs and padishahs, well, but now it is given by presidents and presidents, and, like in old time, they do not regret gold. 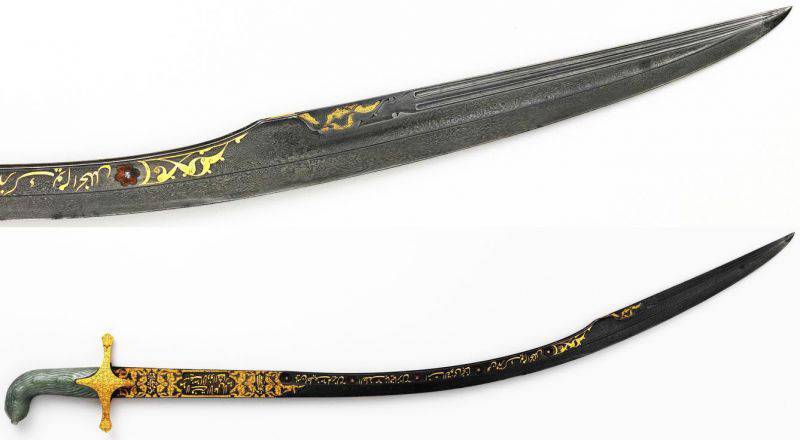 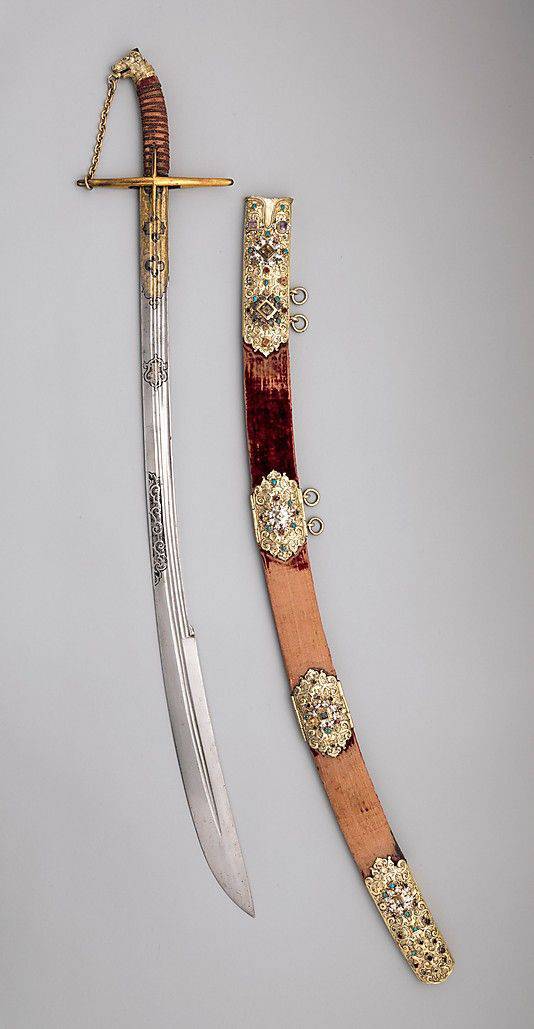 What types of weapons with a short blade are considered the most decorated? Judging by the museum exhibits, for example, samples from the Metropolitan Museum in New York for the title of the most richly decorated Turkish and Indian samples. Then comes Iran, and all the rest are just pale copies of what was created by the local craftsmen. The Kubachi weapon had an excellent finish, but ... it was a masterful, but still not so rich. Turkish masters used for decoration not only gold and silver, but also gems, corals, pearls, shark skin - that is, the value of the decoration itself sometimes repeatedly exceeded the value of the blade itself. 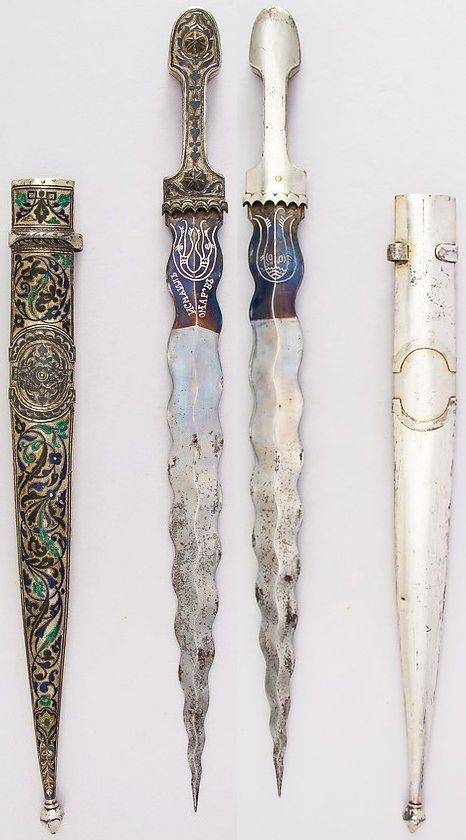 “The decoration of my gold golden dagger shines ...” To whom these lines are unknown M. Yu. Lermontov? And here he is in front of you: Caucasian dagger Kama XIX century. and Dagestan work, as indicated by the extended head of the handle. But what is his wavy blade? A very unusual weapon, and a blade of a form completely uncharacteristic for the Caucasus. Steel, silver, enamel. Length 54,9, see Weight 354,4, Metropolitan Museum, New York.

At the same time, the master gunsmiths tried to make the blades themselves more constructively more beautiful and more deadly, for which they used various tricks. Used blades with slots, in fact, no role played, with a wavy or serrated blade.

Sometimes it was justified, but only sometimes in some specific types of weapons, in particular, boarding. But for the domestic weapon the blade form did not play any practical role. After all, it is possible to slaughter a person with the most ordinary kitchen knife, and the slaughtered person will be a little consolation to see a dagger sticking out of his chest with a jade handle and gold and diamond trim! 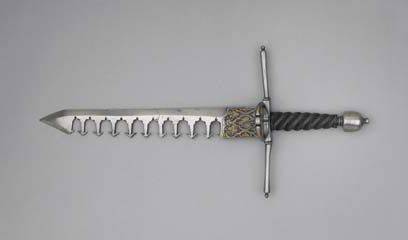 Dagger-blade blade. How he was used in battle is very well shown in the Soviet film "Black Arrow", filmed on the eponymous novel by Stevenson. Metropolitan Museum, New York.

But as evidence of the skill and skill of the master gunsmiths, the richly trimmed weapon, of course, has no equal. It has mastery, a fusion of technologies of many generations, aesthetics of ancient views on the concept of “beauty”, local traditions, attitude to religion and much, much more, which allows us to better understand the spiritual culture of other nations!

Bayonet XVIII. The same dagger inserted into the barrel of a musket. Victoria and Albert Museum, London.