January 5 2016
15
The interesting approach of this school of knife fighting makes you pay attention to it. Why in some moments the Libre fighting system is similar to the Soviet hand-to-hand combat system? Maybe the answer is that both systems are based on reality? Or something else?
About Libre fighting tells its founder Scott Babb.

1. Characteristic style (school, direction) in one sentence
Libre fighting is a non-standard method of working with cold weapons, specially designed for Western types of knives and collisions with cold weapons.


2. Style motto (schools, directions)
"The knife is not a weapon"

3. The origins (beginning) of the direction (when and who founded)
Libre fighting game founded by Scott Babb (i.e., I) in San Diego, California. I started building the system at the end of 2004, but it took us a couple of years to create the basic structure. By 2008, we had an early, rough version of the system that you now see. I unveiled the Libre fighting game in December 2008. Since then, the system has been constantly improving and improving, and many hands have helped to shape it.

4. The ultimate goal of the class (the ideal to which the student is going), the physical and mental qualities that he must acquire
I hope that after learning Libre a person will be destroyed illusions about the violence with the use of a knife. Unlike what many people think when they come to practice, knife fighting is not a beautiful and not “smooth” sight. Duels leave for the movie. The knife attack is fast, chaotic and primitive. And as soon as a person accepts reality, he can begin to prepare how to react to such an attack.
Most of the training in knife fighting consists of a pair of mining and conditioned series. Gradually, this leads to a misunderstanding that a knife fight on a knife is practically a dance. What is it strikes and parry, rebounds and attacks, dynamics. While in reality everything is tight, aggressive and brutal. I saw a lot of guys with the experience of intensive knife fighting, who just froze in sparring workouts, when the opponent just approached, snapped in street style and began to squander in the style of "sewing machine". 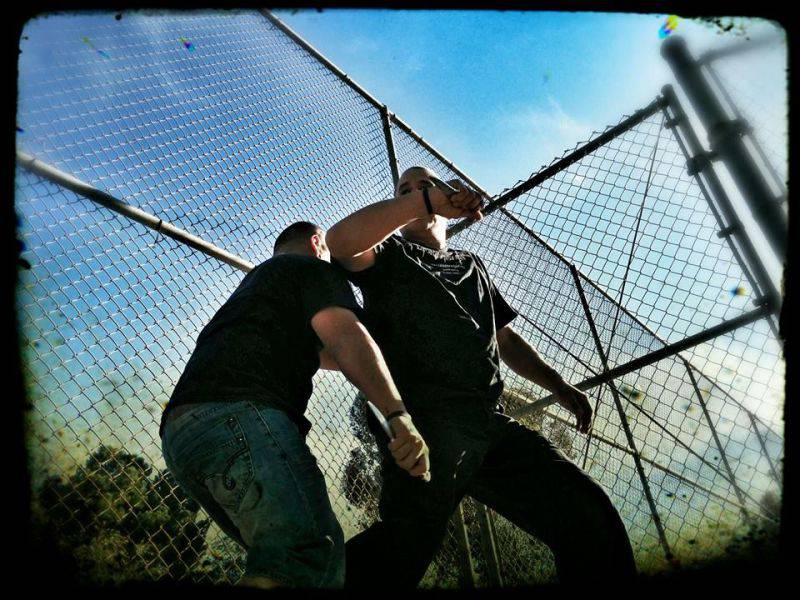 5. Teaching methods
I believe in the constant development of the base. In each group, without exception. I also believe that it is important to train with a certain level of controlled aggression. There is nothing passive in a situation where someone is trying to kill you, so you need to train with the appropriate attitude.

6. Used equipment (shock, wrestling, zalomnaya, etc.)
In Libra, there are no disarmament techniques and creases are rarely used, only in special cases. We prefer injections to cuts for several reasons. The first is that in the western world in many places it is cold most of the year and your opponent is likely to have several layers of clothing - which may prevent the cut from reaching its goal. At the same time, it is possible to penetrate several layers of clothing with a thrust. Also, statistics show that stab wounds are more likely to be fatal than incised wounds.

Taken from our site.

1) The essence of Libre in the attack, and not in parrying or trying to move around the defense of the enemy - the defense of the enemy must be broken.
2) Libre's strategy involves exploring the stance, defenses, enemy positions, and using it. The practitioner also uses the legs (movement), feints and the direction of the line of sight in order to break through the opponent's defense.
3) Protection in Libra comes from the use of footwork to control distance, incline, provoke (lure) and neutralize the enemy. Blocks and / or beats are rarely used.
4) The essence of Libre is not in a "duel", but in a "battle." In Libra do not try to pinch the enemy. The system aims to break it in the quickest and most brutal way from the practice arsenal. This is where the term “Libre Fighting” comes from. This is not a traditional martial art, not a “system” or “style”. This in its essence is just a “fight”.
5) Libre does not limit itself to "technicians." We are learning to use anything around to gain advantage. This includes using your own clothes (or your opponent's clothes) to blind, strangle or distract him. Use all that is at hand to throw at the enemy. Spit, bite, pinch, pull hair and beat his head. Break the opponent's head against the wall, curb or table. Libre practitioners learn to improvise to win.
6) The system of Libre is not sharpened by the use of heavy agricultural blades. It is sharpened by the use of a conventional folding knife that can be carried around with you. Therefore, special emphasis is placed on enhanced cuts and attack ONLY vital areas, or to cripple the enemy. A small "street blade" cannot inflict much damage as easily as a heavy agricultural blade. Therefore, too many cuts or stabbing blows are not applied. Each blow with a "street blade" should bring as much damage as possible.
7) Growth is needed in Libre. It is necessary to supplement the system style of battle, which is owned by the user. Libre should adapt to a person, not a person to Libre. It is welcomed when practitioners make Libre their own to use what they have in combination with Libre.

8. The presence of training battles (sparring). In what form, according to what rules are held?
We start sparring with Blender. Blender is sparring in tight spaces (around 6 X 5 feet). This forces the student to be aggressive, and also teaches him to compete with an opponent who shows the same level of aggression. This takes them out of the dueling mood, and puts them in a situation that is closer to what they face in the real world. As soon as they show the right attitude and skills, they will be allowed to spar in the open air. Although they will still be practicing Blender regularly.

9. Physical training (general and special) - including work with weights, free weights, your weight
Most of the people I teach individually are black belt owners / instructors in other systems, military or law enforcement officers. So I usually train people who are already in "combat form."

10. Work against the group
We put emphasis on work against several opponents, and unlike many systems, we start early to train students in such situations (after 3-6 months of training).

11. Situational training
We work out a large variety of street situations, and sometimes we train on the street, in alleys or parks, in order to increase the degree of realism in training. The specific situational training depends on the student. Law enforcement officers, for example, can work out a situation where a firearm malfunctioned, and a student is attacked by several opponents. The knife can then be used to give the officer the opportunity to check the weapon and start using it again. In the case of a civilian student, we can put her in a situation that reflects domestic violence, or the start of an assault with the use of violence that can lead to sexual violence.
We also have an anti-theft / urban survival program called the Black Box, which is based on real cases of abductions in Mexico City. The type of activity of the majority of people who pass this training is associated with a particular risk, and they have experience of serving in the army or law enforcement agencies.