Not at all festive thoughts about the state defense order

December 28 2015
74
Last week, a video appeared on the network in which Deputy Prime Minister Dmitry Olegovich Rogozin demonstrates the level of possession of a pistol. The high official was frankly surprised by the ability to shoot “Macedonian” with two hands, the skills of intuitive shooting, and the general shooting training. Targets fell one after another. Impressed. How impressed at the time the documentary of Dmitry Rogozin "Tanks. Ural character ”, dedicated to the Nizhny Tagil Uralvagonzavod. 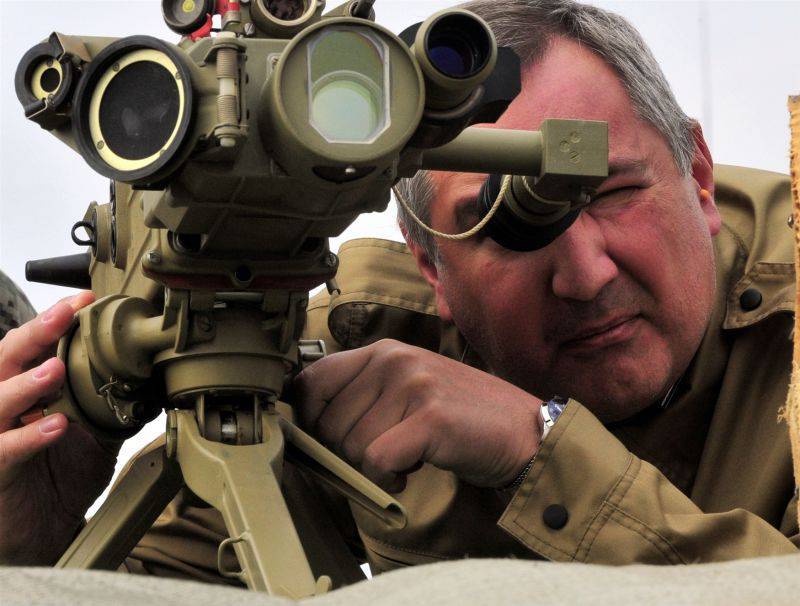 However, this film appeared on TV screens last summer, now the work of the vice-premier was limited to sharp posts on Twitter in response to statements and actions of Western politicians. Meanwhile, Dmitry O. in the current government is not in charge of international relations, cinema or small-arms training of citizens. For four years he has been heading the country's defense industry. Dmitry Rogozin - Chairman of the Board of the Military-Industrial Commission of the Russian Federation, Maritime Collegium under the Government of the Russian Federation, State Commission for the Development of the Arctic, State Border Commission, Commission on Export Control of the Russian Federation. The Vice Prime Minister is responsible for executing the state defense order.

How did the outgoing year in the field of professional responsibility of Dmitry Rogozin? According to his estimates, it is quite effective. In early December, in an interview with NTV, the Deputy Prime Minister announced that the state defense order of 2015 of the year would be fulfilled by about 96 percent. The remaining four percent fall on projects that have stumbled due to the short supply of equipment and components that were previously ordered from partners abroad, but did not reach the enterprises because of the known sanctions.

In a word, there are no organizational and managerial problems in the branch under the jurisdiction of the deputy prime minister. True, the story of the construction of the Vostochny cosmodrome has come to mind. This object does not relate directly to the defense order, but can serve as an illustration of performance and discipline in the performance of the most important state programs. At Vostochny, this December, which is called a Christmas tree, was planned to hold the first launch of the Angara light rocket. Did not happen. Almost all infrastructure sites revealed serious flaws and deficiencies.

At the beginning of the meeting, which Vladimir Putin spent at the new cosmodrome in mid-October, Vice-Premier Dmitry Rogozin supervising the construction of the Vostochny promised to do everything possible to ensure that the first launches took place before the end of 2015. The president did not support him. “You can’t slip into a break or sturm,” he said then. “We need to monitor the quality, reliability, and security of the infrastructure.” Putin allowed to transfer the first launches of spacecraft from the new cosmodrome to 2016 year.

The position is very sound, but it was embarrassing that the specific dates for the first start have not been determined. It is the same as putting the task to a troop unit to reach the line of attack without determining a specific time. The main thing is not to lose tracks and wheels on the road. Such undemandingness has already led, for example, to a dozen criminal cases on the same “Eastern”. Here, as is known, the funds allocated for the construction of the cosmodrome were stolen.

Last week, Tatyana Golikova, head of the Accounts Chamber, called on the program “Opinion” the reasons for such free handling of budget money. She criticized the practice of government on 100% to advance major projects and contracts. Imagine, on the object just started to dig a pit, and financed it on the roof inclusive, to reach which will take many, many months. All this time, the contractor manages resources at their discretion.

“We need to take more seriously the expenses that were previously made in previous years, and the fact that they are not yet spent expenses,” the head of the Accounting Chamber said on television. - This is quite a large amount - 4,2 trillion. rub. as of October 1 2015 of the year. "

Projects that Dmitry Rogozin did not recall

Tatyana Golikova talked about macroeconomic problems in general and did not clarify the contribution to these unrealized trillions of rubles, formed by enterprises of the military-industrial complex, in which there are enough projects that were delayed for years and not executed during contracts. Almost daily, with a televised speech by Golikova, the Chairman of the Russian Government, Dmitry Medvedev, visited the Far Eastern Zvezda plant and visited the nuclear submarine Kuzbass, which, after upgrading, was ready for a checkout at sea. Behind the scenes, it remains that the boat came to the factory in the 2009 year, and its modernization, according to the contract, should have been completed in 2013.

There are other examples of matches. While Deputy Prime Minister Dmitry Rogozin demonstrated his skills in using a pistol, Deputy Minister of Defense Yury Borisov announced that the deadline for the transfer of the Navy to the two frigates Admiral Grigorovich and Admiral Essen had been broken. Now, the latest ships equipped with Caliber-N missile systems will be part of the Black Sea fleet only in 2016. We note in parentheses that the construction of each mentioned frigate cost the treasury 40 billion rubles.

Yuri Borisov did not say about the reasons for the failure of this schedule. But the transfer to 2016 of the year of completion of state tests on another modern frigate "Admiral Gorshkov" explained "the need to conduct an extended test cycle of the latest weapons." This budget ship cost more. It is more abusive than the Black Sea frigates, at least as many cruise missiles on it as Admiral Grigorovich and Admiral Essen combined.

In July of the outgoing year, on the day of the navy sailors holiday, the Admiral Gorshkov painted with flags stood in the formation of the Baltic Fleet ships. The Supreme Commander, the Minister of Defense, and the Commander-in-Chief of the Navy familiarized themselves with the newest frigate. Since then, the "Admiral Gorshkov" switched to the Northern Fleet, but it remained in the state testing cycle. "Due to the large amount of high-precision testing weapons- quotes RIA News a source in the Navy’s main headquarters, the transfer of the main frigate of the 22350 project Admiral Gorshkov to the Navy, is shifted to the right by the end of next year. ”

The transfer dates for the 2016 year to the transfer to the fleet of the head minesweeper of the 12700 “Alexander Obukhov” project, the head assault ship of the 11711 “Ivan Gren” project. By the way, "Ivan Gren" is still that unfinished. He has been on the water since May 2012. Completion was delayed, several times transferred the beginning of the mooring tests. Gone "right" and with the transfer of the ship to the fleet. The St. Andrew's flag on it will be raised at best in the second quarter of 2016 of the year.

No doubt, the construction of lead ships in projects is always difficult and takes longer than the creation of serial sisterships. However, all this is taken into account in the contracts of the state defense order, the execution of which was so victoriously reported to the country by Deputy Prime Minister Dmitry Rogozin.

The defense order includes not only the construction of new warships. Most of it is devoted to the repair and modernization of existing weapons and their carriers. Here, too, all is not well. There are small examples. Here is one of them - not yet visible in the ranks of the Black Sea Fleet of the diesel submarine "Alrosa", promised at the end of 2015 of the year. There are significant examples. These include the modernization of the Marshall Ustinov missile cruiser of the Northern Fleet.

Late last year, RIA Novosti, citing the official representative of the Severodvinsk ship repair plant Zvezdochka, Evgenia Gladyshev, reported that the “Marshal Ustinov missile cruiser” of the 1164 Atlant project would be returned to the Navy at the end of 2015 after four years of repair. ” According to Gladyshev, “in the third quarter of 2015, the ship will begin the implementation of the factory running test program. In the fourth - will be transferred to the Navy. "

This September, the company's general director Nikolay Kalistratov, instead of the promised factory tests of the Marshal Ustinov cruiser, shared new information: “It was decided to ship the new complex (of missile weapons), which is not there yet. The ship will be handed over to the Russian Navy, as stipulated by the contract, in 2016 ”.

We will not catch the general director of Zvezdochka for the language, recall last year’s message from a representative of the plant. Perhaps the contract and in fact corrected. We'd better do boring arithmetic. The press reported that 2011 trillion rubles would be spent on financing the state armaments program for 2020-2020 years (LG 20,7). 19 trillions has been posted to the Department of Defense. For a year, 1,9 trillion rubles is taught. Four percent of this amount (the shortfall, which Dmitry Rogozin said) is being pulled by 76 billion rubles - almost twice as much are the frigates, the deadlines for the transfer to the fleet of which are disrupted this December. In total, the projects that were not fully implemented, only those given here as an example, cost the treasury 200 billion rubles.

You can, of course, distract from these sad figures and recall shipbuilders from Zelenodolsk who installed the Kalirov-N small rocket ships Zeleny Dol and Serpukhov, the Admiralty shipyards shipbuilders who transferred the Navy on Friday, December 25 to the Black Sea Fleet , the newest, and in many respects unique, search and rescue ship "Igor Belousov", other teams of defense enterprises. What is the example of the Novosibirsk aircraft builders from the Chkalov Aviation Plant, who sent the Su-34 bomber over the plan to the Ministry of Defense?

However, it is clear that the military-industrial complex can not yet master the money allocated in the framework of the LG 2020. It is possible that the problem worries the government, and even measures are being taken to resolve it. In Twitter and Dmitry Rogozin videos about this details are not found. But the country learned how the deputy prime minister knows how to shoot “in Macedonian”. Instead of a real case, again, a pretty tired PR. Maybe some of the men in our government also cross stitches well? That would have pleased women for the holiday ...