December 28 2015
80
The construction of the first small missile ships (RTOs) of the long-term project 22800 Karakurt has begun. The first two ships of the series were laid at the Pella factory in Otradnoye. Over the next few years, it is planned to build a large series of such ships, which will continue to update the naval fleet and give him modern technology with high performance.


The laying of two ships of the new project took place on December 24 at the shipyard "Pella". In accordance with the order of the Commander-in-Chief of the Navy, the first ships of the 22800 project were named “Hurricane” and “Typhoon”, the ship's serial numbers were 251 and 252, respectively. According to the approved construction plans, all necessary work, including testing, must be completed within the next few years. The ship "Hurricane" should be part of the Navy in 2017 year, "Typhoon" - in 2018-m. According to some reports, these ships will be transferred to the Black Sea Fleet. According to representatives of the fleet, the newest ships have a number of characteristics that positively affect their characteristics and combat capabilities. 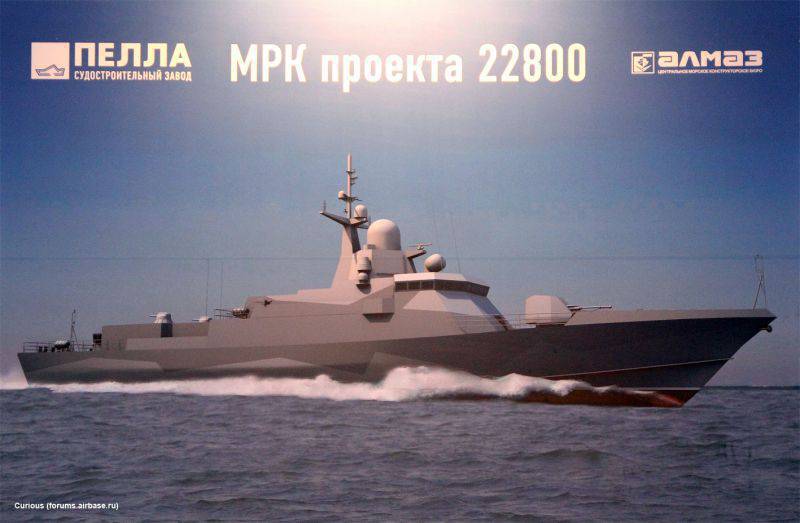 The plans of the military, concerning the construction of small rocket ships of the 22800 project, became known this summer. In early July, Admiral Viktor Chirkov, Commander-in-Chief of the Navy, said that in the foreseeable future new ships of the 22800 project will be built, which should replace the existing frigates of the 11356 project. In this case, it was argued that the laying of the lead ship of the new type will be held in 2016 year. As recent events have shown, these plans were adjusted, thanks to which the construction of two ships at once started before the end of 2015.

In August appeared news on the completion of design work on the IRA "Karakurt". At the time of these reports, the Almaz Central Marine Design Bureau was completing work on a technical project. In addition, in August, information appeared on the estimated size of the planned series. It was argued that 18 new small rocket ships would be built.

At the end of October, Deputy Commander-in-Chief of the Navy, Vice Admiral Viktor Bursuk told the press that the new ships of the Almaz Central Design Bureau will be built in a large series, several shipbuilding enterprises will be involved in this project. Due to the large number of ships project 22800 will be able to enter into the composition of all four fleets. V. Bursuk also noted that the main strike weapons of the promising ships will be the Caliber cruise missiles. 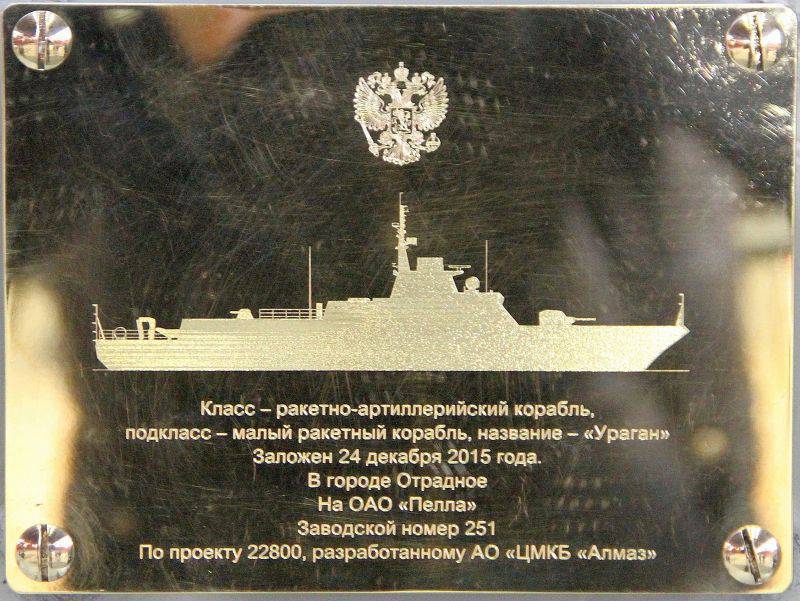 Mortgage board of the ship "Hurricane"

In the second half of this year (exact date unknown), the Ministry of Defense and the shipbuilding enterprise “Pella” concluded the first contract for the construction of small rocket ships of the 22800 “Karakurt” project. According to current plans, in the next few years the Pella plant is to build seven new types of ships. Next year or later there will be an open competition, during which the builder of the next ships of the series will be determined. As previously stated, a total of navy must receive 18 ships.

Earlier it was noted that the new ships of the 22800 project should change in the construction of the 21631 “Buyan-M” project. After analyzing the opportunities and prospects, it was decided to limit the construction of "Buyanov-M" to nine units. After that, the Navy will receive new ships of the "Karakurt" type. The first ships of this type, in accordance with existing plans, should be part of the fleet in 2017-18. After that, the supply will continue.

A curious feature of the recently launched project is the fact that the Pella plant had not previously engaged in the construction of warships. This company has extensive experience in the construction of various equipment, but in the interests of the military department was engaged only in the assembly of boats. Now factory workers will be able to get a new experience, which will be useful to them in carrying out the following orders. 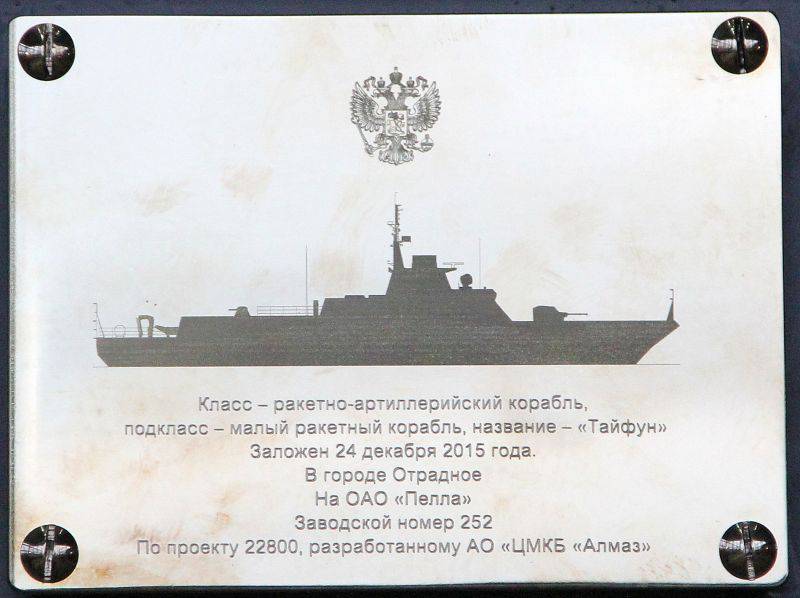 Mortgage board of the ship "Typhoon"

According to reports, small rocket ships of the 22800 project will have a displacement of about 800 t, total length about 60 m, width of 9 m and draft about 4 m. As follows from the published materials, the ships will have a hull and superstructure, built from a set of straight panels The goal is to reduce radar visibility. Exact information about the applied main power plant is missing. Apparently, the available types of diesel engines will be used. Ships will be able to reach speeds up to 30 nodes and perform assigned tasks at a distance of up to 3 thousand miles from the bases.

In the aft part of the superstructure of the ships "Karakurt" a universal ship shooting complex with eight cells will be installed to accommodate missiles. The main strike weapons of ships will be Caliber missiles of various types with different combat units. In addition, an artillery mount with an 76 caliber mm gun will be mounted in front of the superstructure. Anti-aircraft armament will consist of 30-mm machine gun and rocket-artillery system. To search for targets, conduct attacks and solve other tasks, the 22800 project ships will receive a set of modern radio-electronic equipment.

According to current plans, the Navy should receive 18 ships of a new type, which will be distributed among all the major formations, with the exception of the Caspian Flotilla. The construction of the IRA of the 22800 Karakurt project will make it possible to continue the modernization of the fleet, reinforcing it with new ships with high performance and advanced weapons. The exact timing of the completion of the construction of the series has not yet been clarified. Probably, the new type 18 ship will be transferred to the customer no earlier than the middle of the next decade. This will significantly increase the combat capability of the Navy, as well as increase the share of new warships.