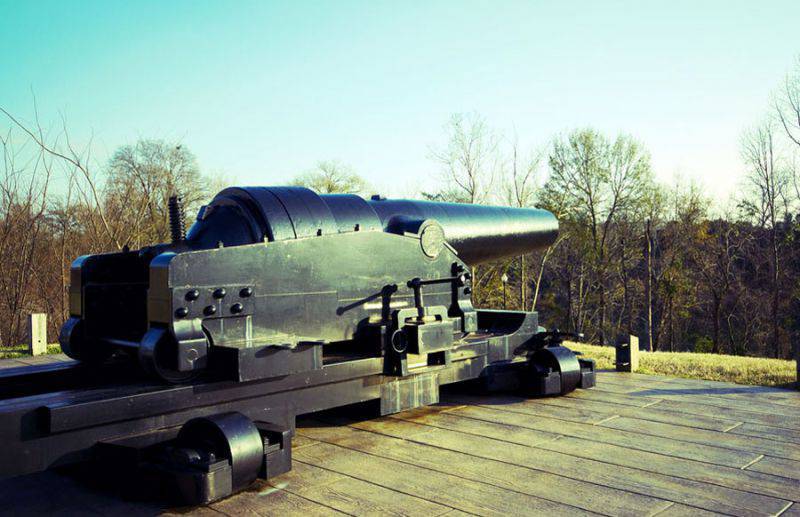 In 1861, American engineer Robert Parker Parrott patented a new method of making gun barrels, which made them much lighter and stronger than the iron castings common to those times. Unlike Thomas Rodman, who developed a sophisticated method of casting with a cooled core, the trunks of the Perroth cannons were cast in the usual way, but they were much thinner and lighter than Rodman's. To increase the strength of their breech, where the pressure of the powder gases when fired, is maximal, wrought iron "cuffs" were worn by the method of hot landing, which protected brittle cast iron from cracking.

In the same year, Parrot's rifled guns were put into mass production on a number of armory factories and during the American Civil War - were widely used by both warring parties. In total, several thousand of these guns were fired, which were in service with the army and fleet USA until the end of the 1880s.

The caliber of the guns varied in a very wide range - from three to 10 inches (10 - 300 pounds in the then American system for determining the caliber by mass of the projectile). Light field three-inches weighed 400 kg and fired at 4600 meters, and heavy siege and ship ten-inches - more than 12 tons and threw 140-kilogram shells eight kilometers.

Parrot cannons were produced not only in the north, but also in the southern states. Small-caliber guns Southerners made without any problems, but with larger problems arose due to the lack of powerful forging equipment for the manufacture of wrought iron rings of considerable thickness and large diameter required for such guns. Solving this problem, a naval officer and inventor John Mercer Brooke suggested making the “cuffs” composite, picking them up from narrow rings, or putting relatively thin tubes on each other.

Brooke guns were successfully tested and produced during the civil war at the metallurgical plant in Richmond and in the sea arsenal of Selma. However, the production capacity of these enterprises was small, so for three years they produced just over a hundred rifled guns in caliber of six, seven and eight inches, as well as 12 ten-inch smooth-bore and several 11-inches.

The production culture was also lame, which is why a high percentage of marriage was noted. For example, of the 54 made in Selma Brook seven-inch sevens only 39 successfully passed the test, and of the 27 six-inch - 15. However, Brook's guns were considered a very valuable weapon and were used at the most critical sites. In particular, two such guns were installed on the first battleship of the southerners Virginia. Two more guns were received by the battleships Atlanta, Columbia, Jackson and some other ships of the Confederate fleet.

On the screen saver - Brooke's gun from the battleship "Jackson" in the American Naval Museum. 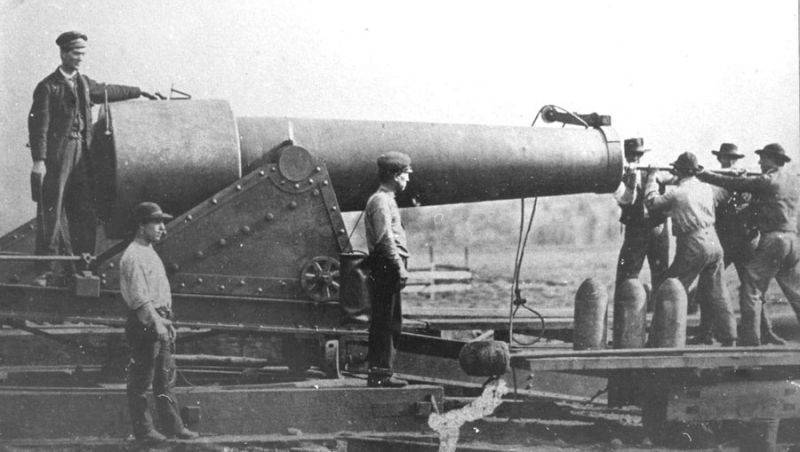 Loading the X-NUMX-Pound Parrot Cannon. To lift the projectile is used folding unit in a rope loop, mounted on the barrel. 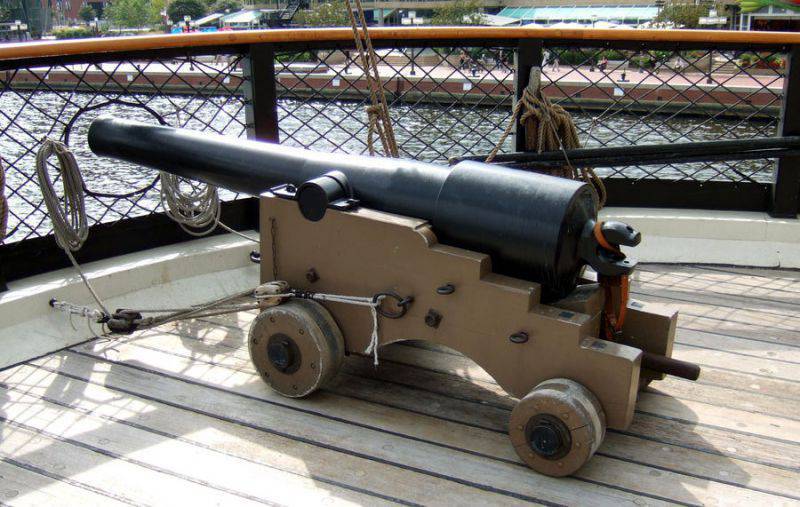 On the left - a muzzle cut of the gun of Parrot with factory marking. In the barrel channel are clearly visible rifling. On the right is the patent drawing of the Perroth high-explosive fragmentation projectile with a leading copper “skirt”, which expanded when fired and ensured the projectile movement along the cuts.

The unexploded projectile Parrota, found on the ground fighting the civil war. 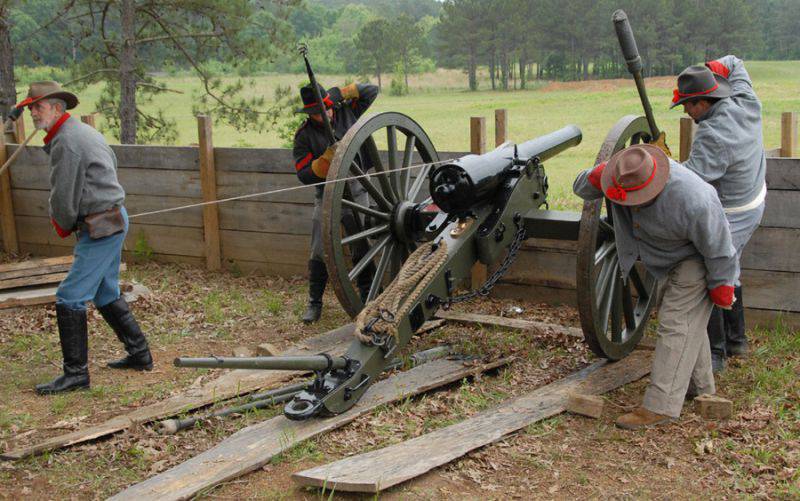 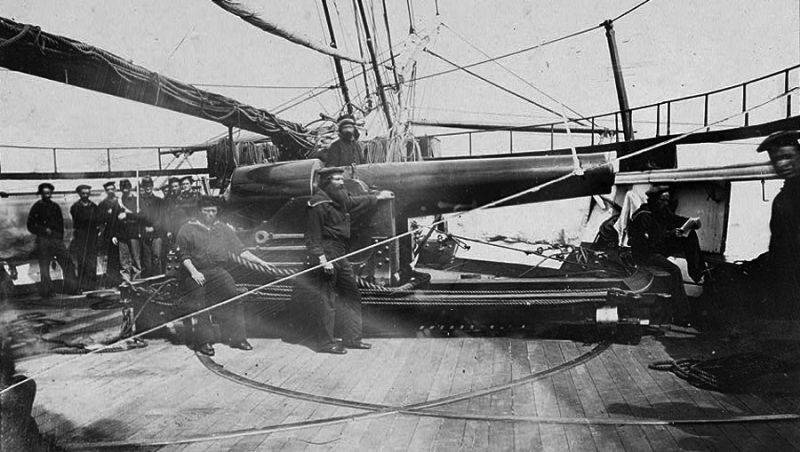 Gun Parrot on the deck of a sail-steam frigate of northerners "Washb". 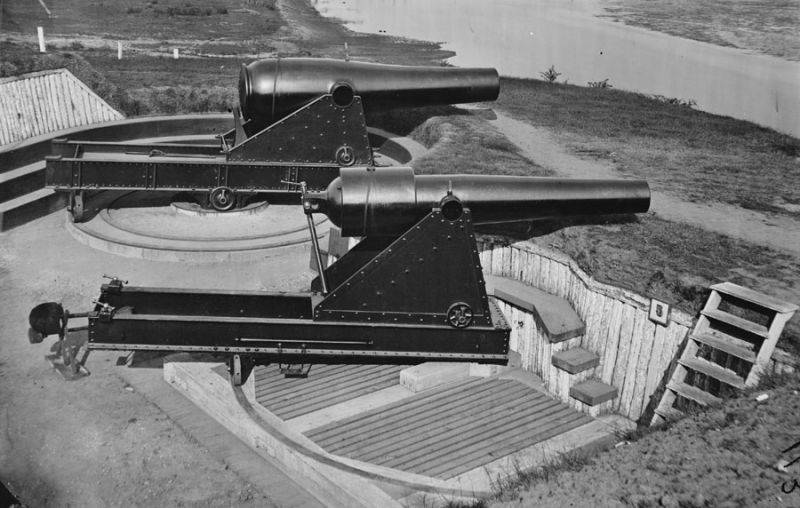 The coastal battery of northerners, on which the smooth-bore 15-inch Rodman bottle and the rifled 10 inch Parrot are adorned with. 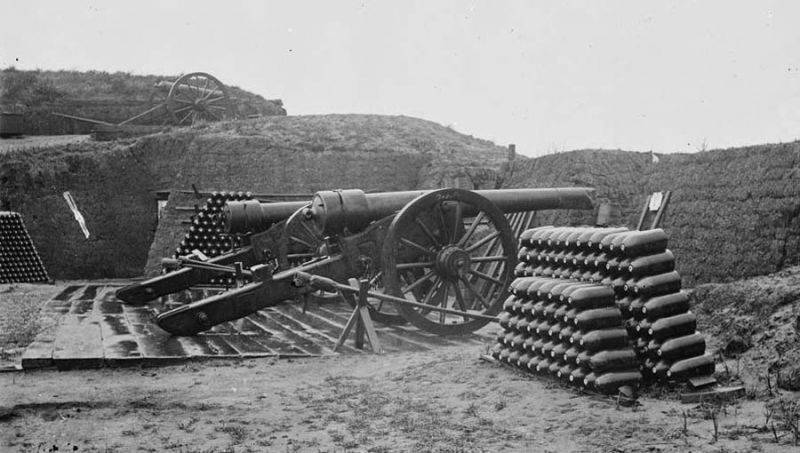 Battery 30-pound long-barreled guns of the Parrot, which 10-11 on April 1862, fired at the fort of Pulas Confederates. As a result of the shelling, the fort received significant damage, and almost all of its guns were disabled. Two days after the bombing began, the garrison of the fort capitulated.
This battle episode clearly showed the inefficiency of the fortifications, built on the assumption of “nuclear” guns, against rifled artillery. 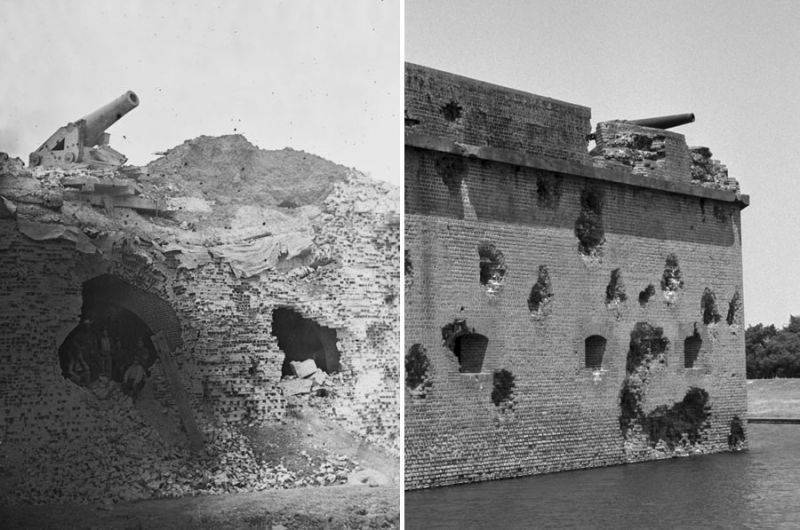 Damage to Fort Pulaski. Thick brick walls of the casemates in many places pierced through. 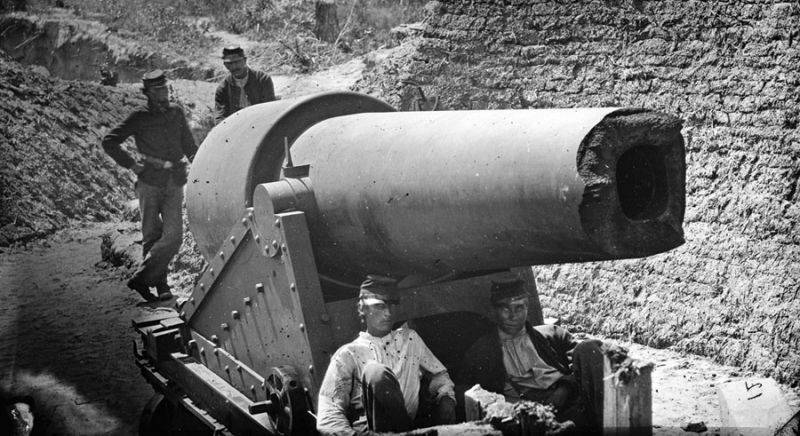 Due to undetected casting defects, the Parrroot cannons sometimes exploded when fired, as is the 10-inch siege gun. According to official data from the US Navy, 703 exploded from 21 guns of this design that stood on warships and coastal batteries during the civil war. On average, one accident accounted for 500-600 shots. Approximately the same statistics was in the army artillery. 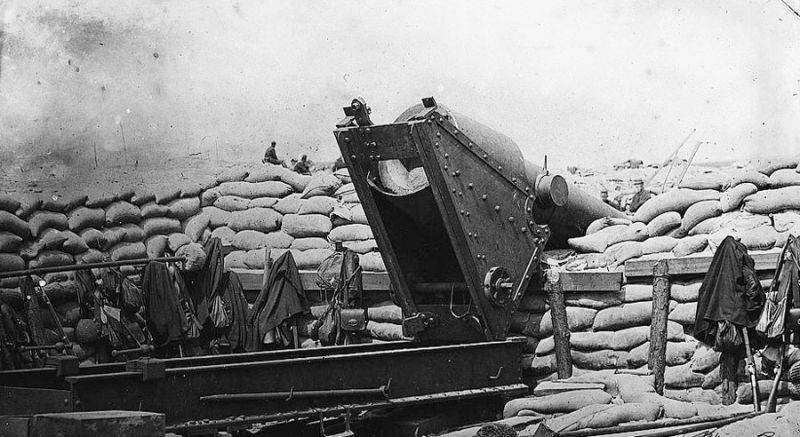 This is called "bombanulo"! Eight-inch Parrot, who had a breech knocked out during a shot.

Brook’s cannon drawing with two thin rings put on each other. 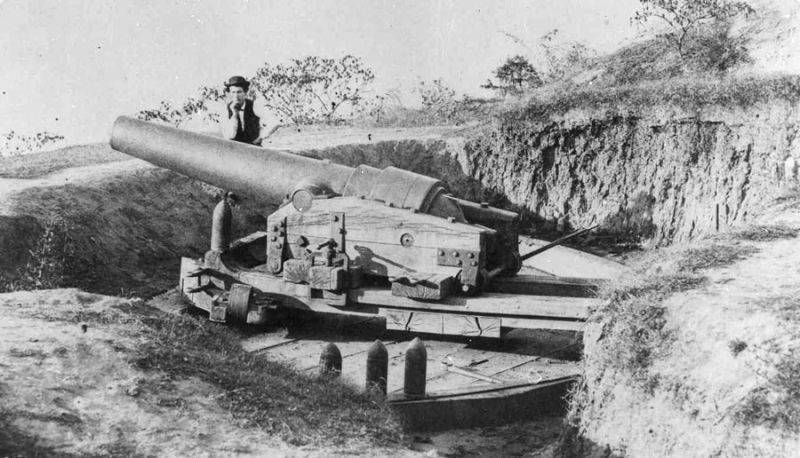 Eight-inch Brooke in coastal position. Looking closer, you can see that the outer barrel of the barrel is made up of three rings adjacent to each other closely. 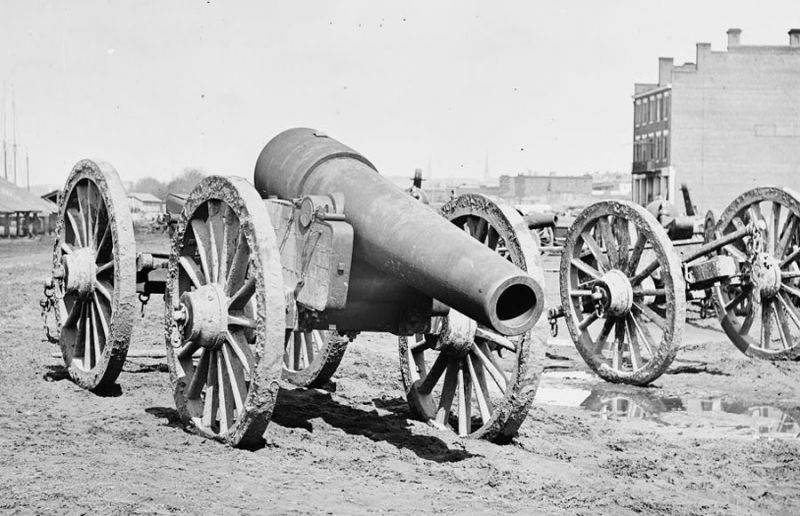 Smooth-bore ten-inch Brooke, captured by unionists in Richmond after the capitulation of the southerners. 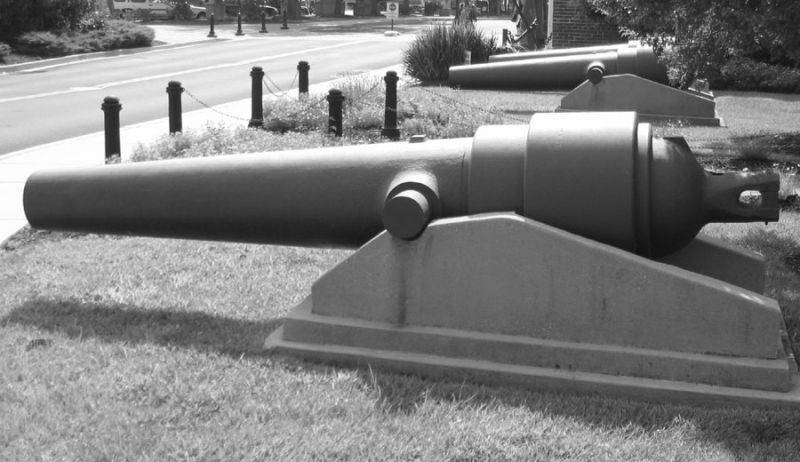 Brooke tools, preserved to this day.