December 25 2015
1
In preparation for the landing in Europe, the US military and defense industries have created several types of new equipment, including a number of self-propelled artillery installations. The successful use of these machines on the European fronts showed the correctness of the decision made, and therefore a proposal was made to continue the development of the line of new SAUs with a wide use of existing ideas and technology. In the spring of 1945, this offer led to the launch of the T94 Mortar Motor Carriage project.

By the spring of the 45th at the Western European theater of operations, the American ground forces used self-propelled guns M12 GMC and M40 GMC with 155 mm guns, built on the basis of existing medium tanks. This technique has proven itself and has clearly demonstrated all the advantages of self-propelled artillery over towed. The result of this was the proposal to expand the list of self-propelled guns available in the troops with the help of a new combat vehicle. This time, the artillery department of the military department proposed the construction of a 10-inch self-propelled mortar. Such equipment could significantly increase the firepower of artillery formations, as well as dramatically increase their mobility.

A new project for the development of an ACS started 15 on March 1945, when the military approved the start of work on a promising topic. The terms of reference for the project was defined as follows. The basis for the self-propelled mortar was to be the self-propelled chassis T83 (M40 GMC), developed on the basis of the medium tank M4A3 Sherman. These chassis have already been built in series and have shown themselves well both in testing and in real combat conditions. The 250-mm muzzle-loading mortar mortar T5E2, which was planned to be developed as part of a separate project, should be installed on the chassis. 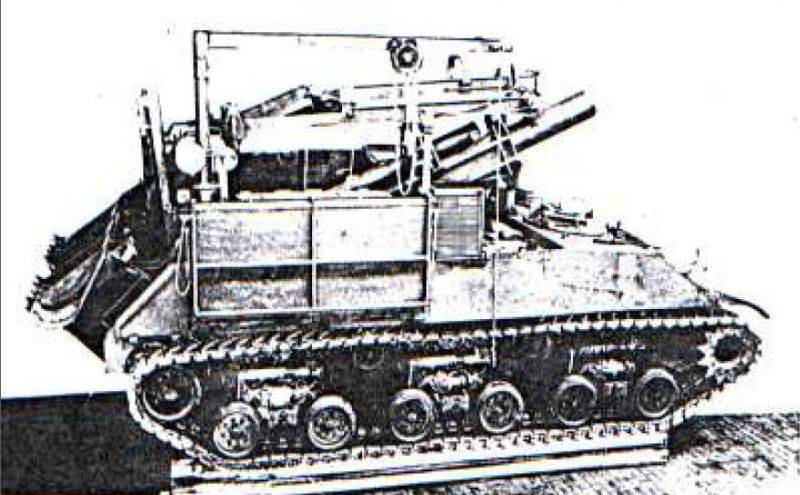 The use of the finished chassis, as it was believed, would help simplify and accelerate the production of new technology. In this case, the combat vehicle had to carry a large-caliber mortar with which it was possible to achieve high firepower performance. Given the experience of the battles of the Second World War, this kind of equipment was of great interest to the troops.

Development of the project T94 MMC did not take much time. Quite quickly, a set of new equipment was created, which allowed the "transform" of the basic TACNXX / M83 GMC ACS into a self-propelled mortar. The main part of the equipment was to be installed in the aft fighting compartment of the hull. In addition, some other innovations were proposed, such as auxiliary weapons, etc. At the same time, the main components and assemblies of the hull, as well as its layout, should not have been changed to maintain the required degree of unification.

The basis for the T94 mortar was the M40 ACS chassis, created on the basis of the Sherman tank. It was noticeably different from the base machine, and also had some features directly related to the proposed role. Thus, in the framework of creating the ACS T83 / M40, the experience of the previous project was used regarding the layout of the hull units. The main difference from the tank M4A3 at the same time was the location of the engine. He was transferred from the aft compartment to the center of the hull, which allowed him to release a noticeable amount in the stern, in which the fighting compartment was located. The transmission, in turn, remained in front of the hull. As part of the T83 project, the hull shape was changed: a frontal part consisting of two inclined sheets and a horizontal roof appeared. The sides of the hull, in turn, had a lower height in the front and increased in the rear.

The protection of the T94 self-propelled mortar, as in the case with the base ACS, was to be provided with a set of armor parts borrowed from the Sherman tank and designed for self-propelled guns. Frontal projection protection was carried out by a large cast cover of the transmission compartment and several inclined sheets connected to it. The thickness of the frontal armor reached 2 inches (about 51 mm). Other hull units had a smaller thickness and were supposed to protect the crew and units from small arms weapons and shell fragments.

The central compartment of the hull housed a radial gasoline engine Continental R975-C4 with power 400 hp. With the help of the cardan shaft, shortened in comparison with the shaft of the "Sherman", the engine was connected to the front transmission compartment. The equipment placed in the latter was designed to rotate the front drive wheels. Self-propelled gun T94 had to be equipped with a suspension on the basis of trucks with a pair of road wheels on each. On each side there were three trolleys with shock absorbers of the type HVSS, equipped with horizontal springs. 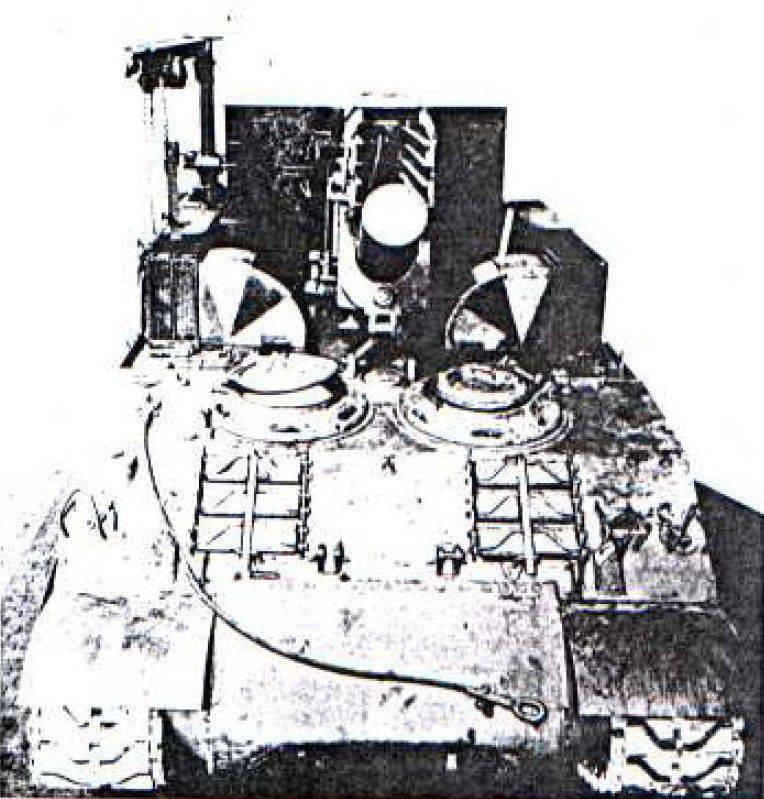 Front view. Instead of a mortar mounted wooden layout

The stern coulter was used in the stern of the hull, which served as an emphasis when shooting. Due to the high recoil, the M40 baseline ACU had to lower the coulter before digging and sink it into the ground, thereby reducing the load on the undercarriage and maintaining a stable position. Once again, it was proposed to equip the coulter with a hoist based on a manual winch. For greater convenience of the gunners on the opener supports provided metal plate. When the coulter was raised, it served as the stern sheet of the fighting compartment, while when it was lowered it served as an additional platform.

In the stern of the T94 hull there was a fighting compartment open at the top and rear (with the coulter lowered with the platform). In its front of the installation was provided for mounting tools. The design of the installation made it possible to direct weapons within a fairly wide sector of a vertical plane, and also to rotate a small angle from the longitudinal axis of the machine. In the transport position, the mortar had to fall forward and down, almost lying on the roof of the engine compartment.

For use on the T94 MMC combat vehicle, a smooth-bore T5E2 mortar of the 10 inch caliber (250 mm) with loading from the barrel was proposed. This weapon was supposed to give artillery units high firepower, which made it possible to perform tasks that other modern self-propelled guns could not cope with 155 mm caliber guns. However, the finished sample of the T5E2 product at the time of the start of the T94 project was absent, which accordingly affected the construction of the first sample of the promising machine, and also affected the fate of the project.

A characteristic feature of the 250-mm mortar was a relatively long barrel, which could significantly complicate the work with the weapon. Due to the large weight of ammunition and the impossibility of manual loading from the barrel due to its location at high altitude, the project authors had to develop a number of new equipment intended for installation in the fighting compartment. It was proposed to mount a special device on one installation with an instrument, which would raise the mine to the desired height and then load it into the barrel. This system was a folding (for transportation) frame with a movable platform that performs the transportation of mines to the desired height. Drive type unknown.

In the stern of the right side plate, it was proposed to install an additional crane for reloading mines from the transport vehicle to the racks of the crew compartment or to the loading device. The crane consisted of a vertical stand and a horizontal boom with a mobile load trolley for lifting ammunition. Crane attachments made it possible to turn the boom in the right direction and to perform various operations for reloading ammunition or loading a weapon.

Due to a number of features of the mortar and its maintenance, the T94 MMC project provided for some other innovations related to the layout of the combat compartment. In particular, on the starboard side, near the crane, it was proposed to establish a folding platform, apparently, for the crane operator. Also, the design of racks for portable ammunition was changed.

According to the experience of fighting in Europe, it was proposed to equip a self-propelled mortar with a set of auxiliary weapons for self-defense. To do this, a smoke grenade launcher caliber 51 mm was installed on the front hull sheet, and mounts for a heavy machine gun appeared on the hatch of the driver's assistant on the roof of the hull.

Shortly after the completion of the design work, apparently by the middle of 1945, the construction of the first model of a promising self-propelled mortar began. Such a machine with incomplete equipment was assembled on the basis of the M40 GMC serial ACS. Due to the lack of a workable copy of the mortar, the assemblers of the first sample T94 Mortar Motor Carriage had to do with its wooden mockup. In addition, a part of other equipment of promising self-propelled guns was also made in the form of demonstration models. According to reports, the layout of the self-propelled mortar also did not receive a full-fledged machine gun. In this configuration, the layout could participate in running trials, as well as be used to practice the ergonomics of the combat compartment. 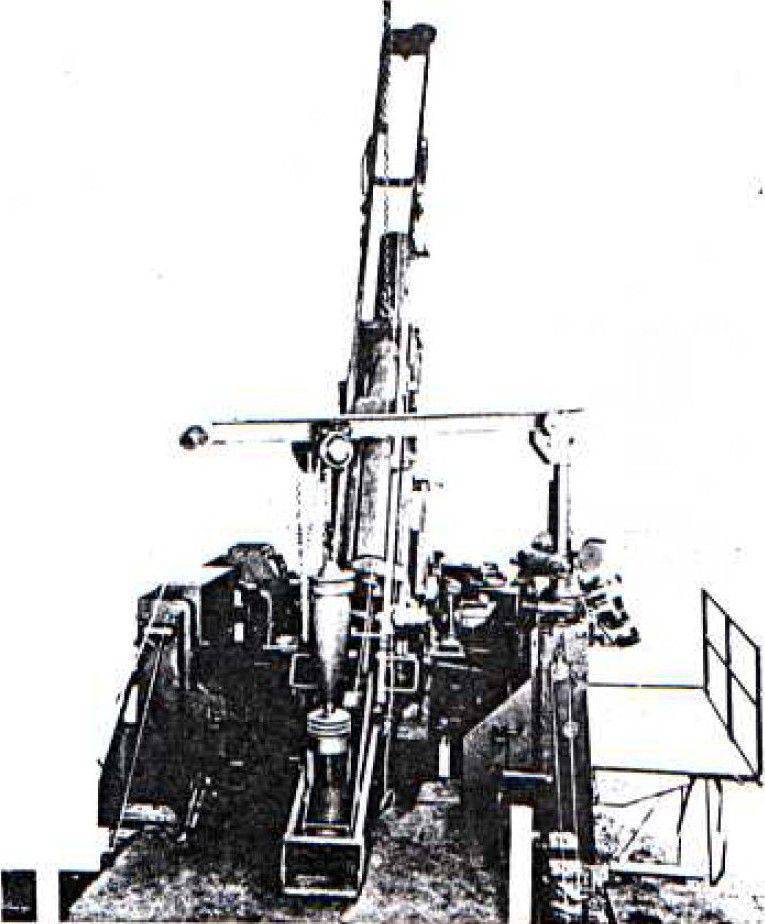 Rear view of the fighting compartment. The mine lifting mechanism and crane are clearly visible.

Work on the creation of 250-mm mortar T5E2 delayed, because of which for several months running layout remained without full-fledged weapons. By the time the T94 MMC appeared, the fighting in Europe was over, and the war in the Pacific was coming to an end. The future of the new self-propelled mortar proved to be the subject of controversy.

Various work on the T94 project continued for several months, until January 1946. Lack of ready-made mortar, as well as a change of views on the appearance of promising self-propelled artillery seriously hampered the continuation of development. At the very beginning of 46, a final decision was made, which put an end to the project. The troops no longer needed equipment with a maximum degree of unification with existing models. In addition, it was decided to build new self-propelled artillery installations on the basis of promising chassis. The self-propelled mortar T94 did not fully fit into the new concept, which is why they refused to further develop this project. The only layout was disassembled as unnecessary.

The Mortar Motor Carriage T94 self-propelled mortar project was a further development of the ideas embodied in the M12 ACS. In this case, a similar concept appeared even earlier, but the first working samples of self-propelled guns with large-caliber guns on tank chassis appeared only in the early forties. Several samples of such equipment could reach the battlefields in Europe. In addition, some of these machines took part in later conflicts, such as the Korean War. However, T94 self-propelled guns appeared too late, and problems with armaments had an additional negative impact on the project. As a result, she became the last representative of her family, based on the ideas and solutions of the M12 project and built on the basis of medium tanks. In the future, the development of self-propelled artillery was carried out with the use of new concepts and ideas.