December 18 2015
44
Active protection is hosted on tanks and other armored vehicles, special systems for shooting projectiles, combined with a local-action radar system. In case of detection of an ammunition approaching a tank (for example, an anti-tank missile), the system gives a command to shoot off a charge, which explodes at the moment of approaching the projectile, forming a cloud of fragments that destroy or at least significantly weaken the effect of the ammunition on the tank. Experts believe that the use of active protection systems can significantly (2-3 times and more) increase the survival rate of tanks on the battlefield.


The idea of ​​creating an active armor protection belongs to representatives of the Soviet tank building. In the USSR, back in 1950-1960-ies, the Central Design Bureau No. 14 in the city of Tula was developing an active protection complex (KAZ) called Drozd. In 1983, a similar system was mounted on the T-55А tank, which received a new index - the T-55AD. The T-55AD tank was the first in the world to have active protection installed. The complex was manufactured 6 for years, but in 1990 was removed from service in connection with the signing of the Treaty on Conventional Armed Forces in Europe (CFE Treaty), according to which the T-55 tank was included in the list of weapons to be eliminated. At that time, the cost of KAZ "Drozd" was 30 thousand dollars. At the end of the 1980-s, the KAZ Drozd-2 was also created, which, due to economic difficulties, did not go into mass production, and KAZ Arena, which became a frequenter of weapons exhibitions, also shared the same fate. The most advanced complex of Russian-made active protection is the KAZ "Afganit", which was created in 2010-ies and appeared on the main battle tank T-14 and BMP T-15, built on a unified heavy tracked platform "Armata". 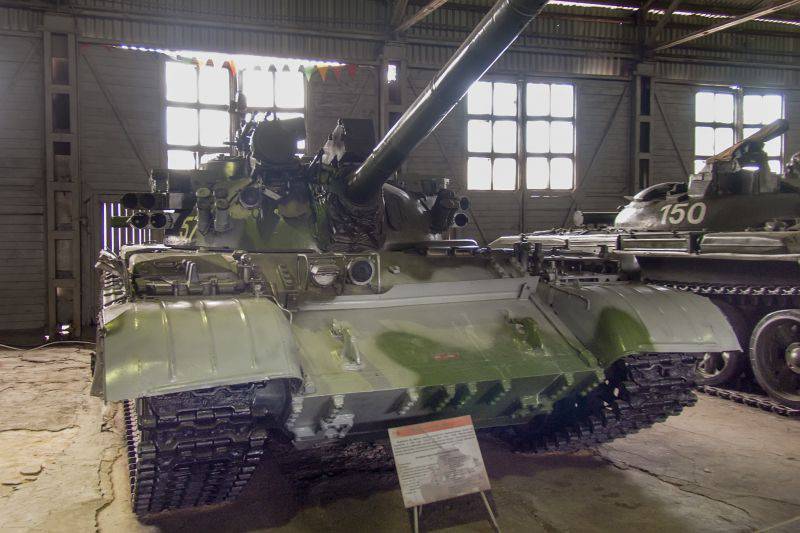 The Soviet Union did not become the only country that showed interest in such developments. In the USA, France, Israel and Germany also began active research in this direction. At the same time, the collapse of the Soviet Union led to a reduction in the threat of a full-scale military conflict, which led to the fact that developments in this direction were suspended. Actively engaged in these works again only after the war in Iraq in 2003 and the Second Lebanon War 2006, in which armored vehicles of the US Army and the Israeli army regularly came under fire from anti-tank grenade launchers and suffered losses.

Currently, the American KAZ Quick Kill is under development and testing, while Israel has already been able to create two types of KAZ - Meil ​​Ruach (windbreaker, Hebrew, export name Trophy) and Iron Fist. At the same time, the Meil ​​Ruah complex is already in service with the Israel Defense Forces. The Israelis, who have been struggling for a long time to improve the safety of armored vehicles, realized that it was impossible to further increase the armor of combat vehicles without a significant reduction in the mobility and transportability characteristics, which also stimulated work to create active protection.

This complex of active protection was the result of a joint 10-year-old operation of the companies Israel Aircraft Industries / Elta and the Rafael Armament Development Authority, which was managed by the R & D department of the Israel Defense Ministry, and also financed the project. At the same time, the concern RAFAEL became the main contractor for this program. The active protection complex was officially unveiled on 8 March 2005, as part of the second international conference / exhibition on low-intensity conflicts, which was held in Tel Aviv. Developed by the Israelis, the complex is designed to protect armored vehicles against anti-tank missiles and cumulative shells. This system creates a protective hemisphere above the tank, tracking potential threats using radar and eliminating anti-tank missiles fired at a combat vehicle. The scheme of action is standard for systems of this type - a special sensor determines from which direction the fire is fired, after which the on-board computer calculates the trajectory of the ammunition and gives a command to the device that hits the ATGM or a rocket grenade on approaching the target. 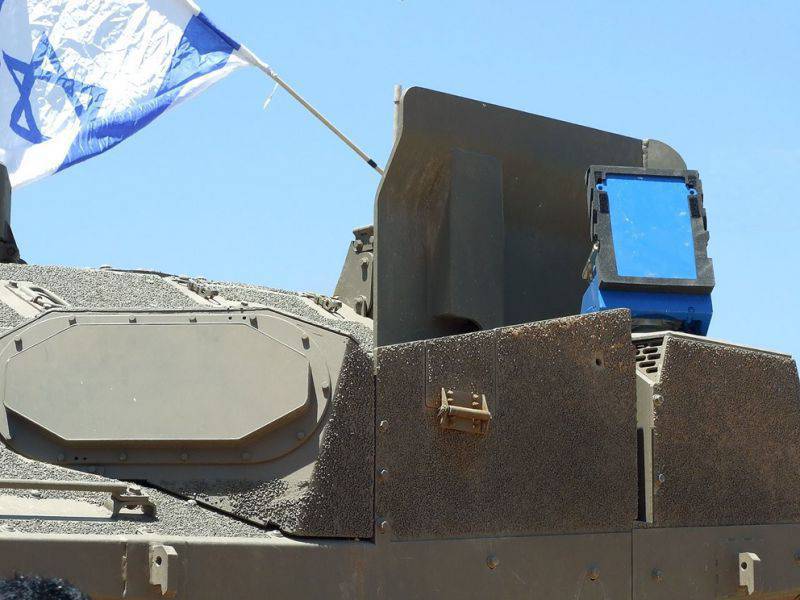 Elements of the complex "Meil Ruach" on the tank Merkava

The Meil ​​Ruach active defense complex consists of a radar station that is responsible for detecting and identifying anti-tank guided missiles, HEAT, and rocket-propelled grenades aimed at an armored vehicle. The radar triggers launchers, throwing in to meet the interceptors, which must hit and destroy the warhead before it meets with the tank at the maximum possible distance from it. After launch, the charge-interceptor generates a directional stream of fragments, which allows you to cope with the threat with the least risk to your own troops. Used radar known Israeli company Elta, which is associated with four antennas located on the front and aft parts, as well as the sides of the platform and is able to provide protection in the sector 360 degrees. Also used are two mechanisms for destroying RAFAEL’s production vehicles that fly up to the tank and are located along the sides of the platform.

Currently, the Israelis offer three options for their active defense complex: the heavy version, the middle one and the light one. The basic version of the TROPHY-HV is designed for installation on the main Merkava battle tanks, its weight is 850 kg (volume 0,69 м3), the system is characterized by the presence of automatic recharge. The TROPHY-MV system can be placed on armored vehicles weighing from 15 to 30 tons and also has an automatic reloading system, but has a reduced launcher and weighs 520 kg (volume 0,42 м3). Both systems provide protection for an armored vehicle from anti-tank systems, RPGs and tank-shaped cumulative shells. The youngest system TROPHY-LV is designed for installation on light wheeled vehicles, for example, cars Humvee. It weighs 200 kg (volume 0,26 m3) does not have an automatic recharge system and is designed to protect only against RPGs. 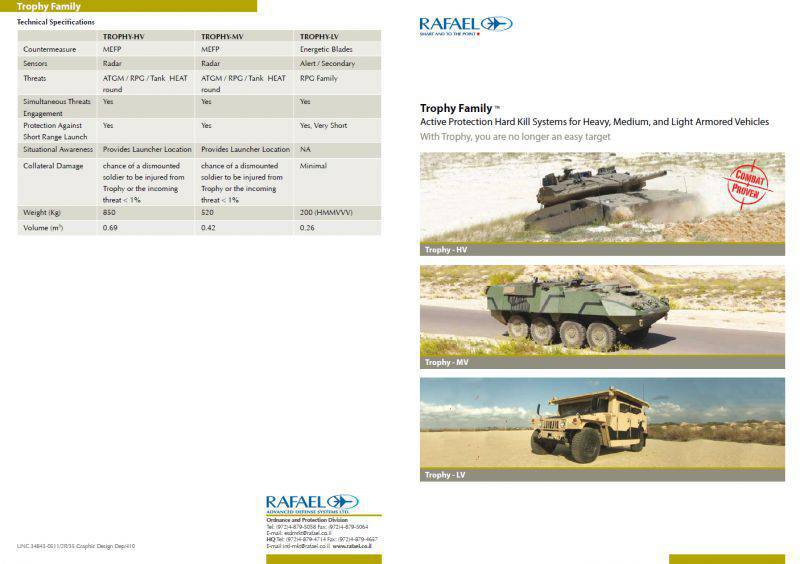 It is worth noting that the Israeli "windbreaker" differs quite a decent price. Put on her all the armored cost a lot of money. According to information from open sources, the cost of one active protection complex for the Merkava MBT was 350 thousand dollars, provided that a significant lot of KAZ was acquired. That is why, at the first stage, the Israelis planned to equip only “Merkava” Mk.4 with the “Meil Ruach” complex, in the long term considering the issue of refitting the entire tank fleet. The first combat vehicles that received this active defense complex were tanks from the 401-th armored brigade.

According to the specialists of the Israeli manufacturer, their active protection complex guarantees protection of the tank against all types of anti-tank missiles. According to them, during the ground tests of the system, 100% destruction of all ATGMs and RPG grenades launched on protected armored objects was achieved. This emphasizes the fact that this complex can be used in urban environments, where it will not harm the infantry interacting with the tank. In the 21st century, Israel became the first country in the world to adopt the system of active protection of tanks and bring it to mass production, starting to equip her armored vehicles with a mass scale. In Russia, the complex of active protection of tanks "Arena", created by engineers of the Kolomna machine-building design bureau, was fully tested and ready for mass production 20 years ago, but this development was not used in any conflict in which the Russian army took part.

In 2010, the Israeli Self-Defense Army successfully tested the complex, firing anti-tank missiles at the Merkava Mk.4 tank with the crew. As part of the test, the military used kinetic guided missiles that did not contain the warhead. These munitions simulated the trajectory of a real rocket, so that the system could intercept them and destroy the threat approaching the tank. For the first time in combat conditions, the complex was tested as early as next year. 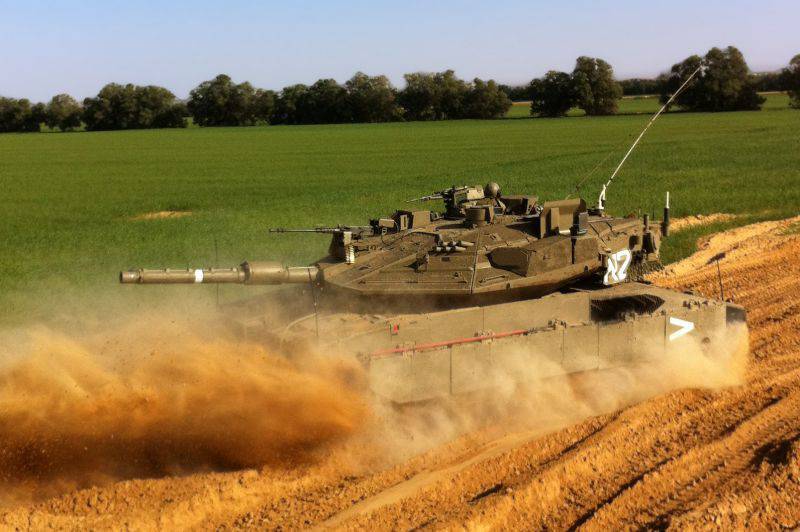 The baptism of fire took place on March 1 on the 2011, when the 9 Battalion of the 401 Tank Brigade of the Israeli army patrolled the territory bordering the Gaza Strip. During the patrol of one of the Israeli tanks, Palestinian terrorists fired from a hand-held anti-tank grenade launcher from a short distance. The complex of active protection "Meil Ruach" successfully dealt with the threat, neutralizing it. The anti-tank ammunition was destroyed at a safe distance for the Merkava, while the tank and its crew were not harmed. The crew of the combat vehicle heard an explosion next to the tank and at first did not even understand what exactly happened. 19 days after the incident, the system again successfully hit an anti-tank missile that was fired at an Israeli tank. This time it happened in the Western Negev, located near the border of the Gaza Strip.

Vladimir Korenkov, who headed the Federal State Unitary Enterprise GNPP Basalt from 2000 to 2009, one of whose areas of work was the creation of an RPG, notes that the Israeli active protection complex can be overcome like any other similar system. The standoff of armor and projectile will never be stopped. At the same time, he agrees that the installation of active defense complexes on armored vehicles increases its survivability on the battlefield.

Speaking about the development of "Basalt", he mentioned the RPG-30, which was originally designed to overcome such systems of active protection of tanks. All active protection complexes that exist at the moment have the same ideology. This is a radar threat detection and at some distance (far or near) the destruction of a flying ammunition with the help of combat units, using a stream of fragments and a high-explosive field from an explosion. In this case, all such systems have common disadvantages. First of all, they include the duty ratio. We are talking about the time interval of the reaction of the complex to the threat. According to Korenkov, the RPG-30 "Hook" is able to overcome such protection systems installed on armored vehicles. 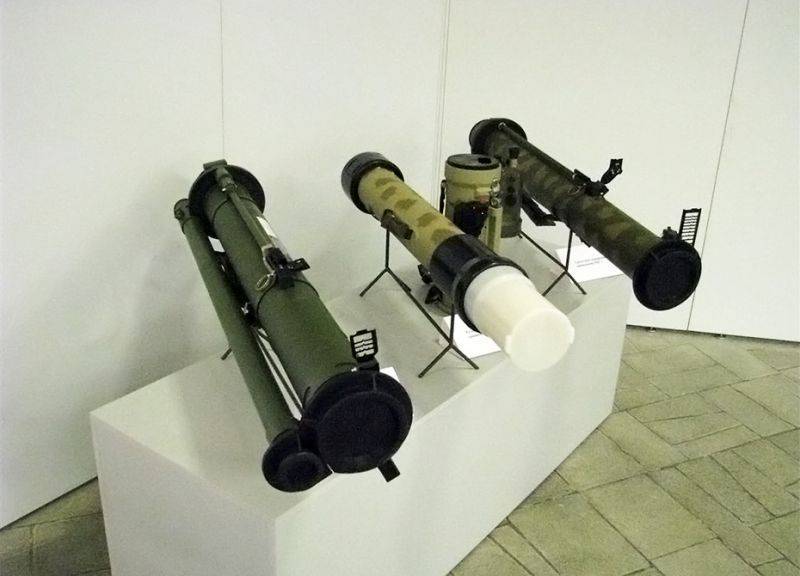 RPG-30 in the foreground

This disposable RPG was adopted by the Russian army in 2012 year. Structurally consists of two parallel tubes in which missiles are located. In the larger pipe diameter is located the means of destruction - tandem cumulative ammunition caliber 105 mm. In the smaller pipe diameter is a missile-simulator target. This projectile possesses radar signatures and trajectories identical with the main grenade and is classified by KAZ as an attacking tank object, causing the complex to fire, then using the resulting “window” after defeating the simulator projectile uses the main ammunition. In 2013, the Russian army purchased a batch of 1000 RPG-30 for a total of 83 million rubles. But what is in service with the Russian army is currently lacking among the opponents of the Israel Defense Forces, which allows Israeli tank crews to feel relatively safe.