News of the project "Typhoon"

December 17 2015
23
There were new information about the perspective armored car KAMAZ-53949 "Typhoon". According to recent reports, the development of this armored car has been completed, and some necessary tests have been carried out. In the near future, new equipment should go to the army to conduct military tests. Carrying out this stage of the project will, to a certain extent, bring closer the moment of adopting a new vehicle.


A few days ago, Oleg Bochkarev, deputy chairman of the board of the Military-Industrial Commission of Russia, spoke about the current plans of industry and the military department on the radio station Ekho Moskvy. He noted that the newest small-sized armored car “Typhoon” had not yet reached the troops. However, the transfer of such machines to the army is planned for the next year. The military will have the opportunity to test new equipment, as well as conduct its military tests.

According to O. Bochkarev, a promising armored car is intended for amphibious units of the army. In particular, for this reason, the new car differs from the existing Tiger armored car with smaller dimensions and weight. At the same time, however, the two armored cars have different characteristics, including protection indicators. Bochkarev stressed that the Typhoonenok and Tiger projects use different principles of ballistic and mine protection. The new armored car differs from the existing one in both the chassis design, the chassis, and other features. The new design and the corresponding ideas relating to the protection of the crew, will reduce the likelihood of defeat personnel. Even if the armored car is taken out of action, the crew will survive and be able to escape from the fire. 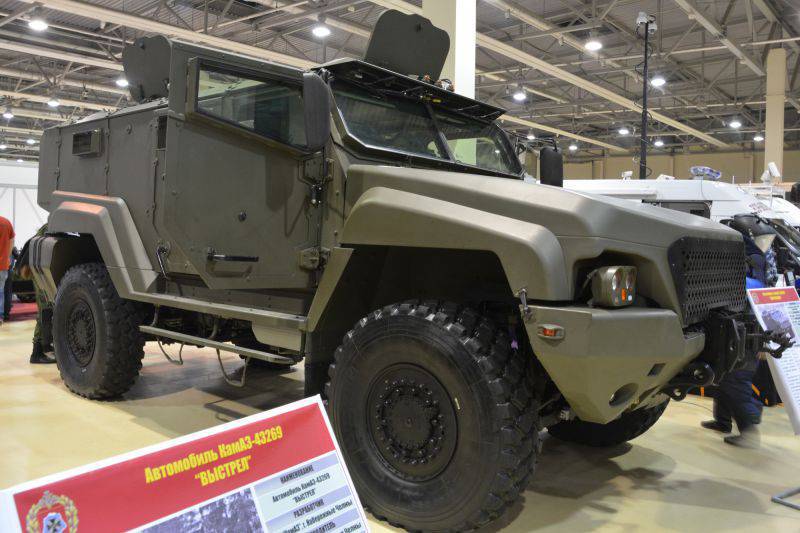 Armored car "Typhoon" at the exhibition "Day of Innovation of the Southern Military District". Photo author

O. Bochkarev said that the project KamAZ-53949 "Typhoonian" was developed after the introduction of foreign sanctions against Russia. For this reason, when creating the project, the authors relied on the capabilities of the domestic industry.

The design of the armored car "Typhoon" was created relatively recently. The first information about this development appeared a few months ago, and soon it became an exhibit at several exhibitions. According to the available data, the aim of the project was to create a promising armored car for the transportation of personnel with weapons and special equipment capable of protecting the crew and troops from firing from small arms weapons and explosive devices. The KamAZ-53949 all-wheel drive two-axle chassis was chosen as the basis for the armored vehicle, which was equipped with an original armored body.

A characteristic feature of the project "Typhoon" was the maximum possible unification of the individual nodes and units with the already well-known armored car "Typhoon". Due to this, it was planned to simplify the production and operation of new equipment, as well as to provide the required protection characteristics. Thus, the case is a multi-layer structure of metal and ceramic elements, similar to that used on the Typhoon-K armored car. Through the use of proven solutions, the new armored vehicle has a ballistic protection corresponding to the 3 level of the STANAG 4569 standard, and can protect the crew from 7,62xXNNUMX mm R armor-piercing bullets.

The armored car was built according to the hood scheme uncharacteristic of the Kama Automobile Plant. Under the armored hood is a Cummins 6ISBe 350 diesel engine with an 350 horsepower. With the help of a manual transmission with an automatic gearbox, torque is distributed to all wheels. The chassis is based on an independent hydropneumatic suspension with the ability to adjust the main parameters. The used powerplant allows the 14-ton car to reach a highway speed of up to 105 km / h.

In a single habitable volume of armored hull there are ten seats for the crew and landing force. Four fighters, including the driver, sit facing forward in the direction of travel and have their own side doors. Another six people are placed on chairs at the sides of the aft hull. To disembark, they must use aft door with a lowered ladder.

For more convenient machine control, a system is provided that collects data on the operation of all major components and assemblies. Information output is carried out on the liquid crystal monitor installed at the driver’s workplace. 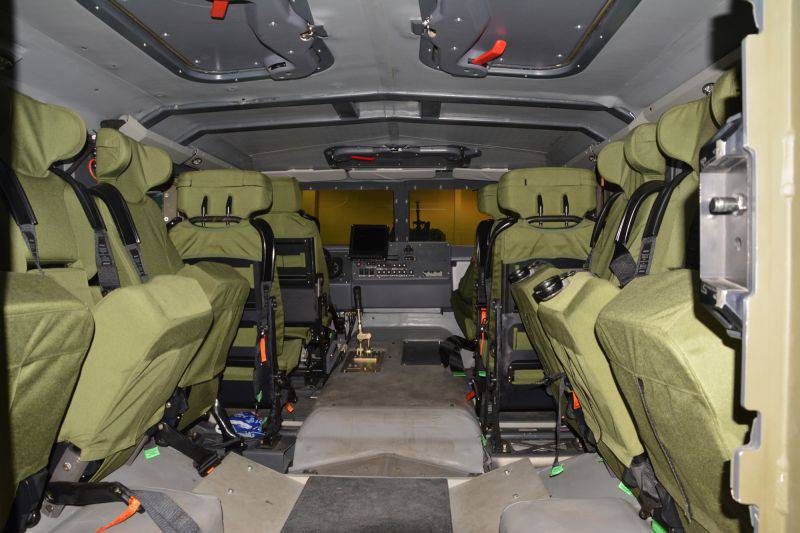 If necessary, the Typhoonenok armored car can receive various additional equipment, primarily remotely controlled combat modules with appropriate dimensions and weight. Due to the possibility of installing combat modules and other equipment, a promising armored car can be used as a protected vehicle for people and cargo, as well as a basis for special equipment: command and control, reconnaissance, sanitary, etc. machines.

The first information about the project “Typhoon” appeared only a few months ago. Since that time, all the main works have been completed, as a result of which it became possible to plan the various stages of testing. According to recent data, to date, the armed forces and the leadership of the defense industry have decided on future plans for a new armored car.

Next year, the first Typhoonenok armored cars will be handed over to the army (presumably to the airborne troops), which will conduct their troop tests. According to the results of trial operation in the troops, future prospects for technology will be determined. If she is satisfied with the military, then in the foreseeable future, the first order for the supply of serial armored vehicles of the new model will appear.

Ctrl Enter
Noticed oshЫbku Highlight text and press. Ctrl + Enter
We are
Innovation Day of the Southern Military District: the typhoon armored carArmored car KAMAZ-53949
23 comments
Information
Dear reader, to leave comments on the publication, you must to register.