December 14 2015
16
Armory Serbia’s industry after the cessation of military-technical cooperation with the Soviet Union began to develop its own models of small arms, which were no longer copied and were not compilations of Soviet systems, but were weapons of their own design. In particular, Serbian arms designers managed to develop and mass-produce high-precision large-caliber sniper rifles - 12,7 mm, produced by Zastava Arms. It is worth noting that this Serbian company has been represented on the arms market for more than 160 years, it was founded in 1853.


The first model of a 12,7-mm sniper rifle (cartridges 12,7 x 108 mm), which received the designation Zastava M93 "Crna strela" (black arrow, Serb.), Was born at the height of the civil war in the former Yugoslavia. It became a peculiar response of the Serbs to the famous Croatian “hand gun” RT-20 of 20 mm caliber, which was designed by Ratko Jankovic for firing on Serbian observation devices tanks and the fight against lightly armored vehicles. The first batch was released already in 1994 and was baptized in the framework of an armed conflict with Croatian troops and the Croatian Ministry of Internal Affairs. Later, this rifle was used by the Serbs during the fighting in Kosovo in 1998-1999, as well as during the armed conflict in Macedonia in 2001. Officially, after a number of improvements, it was adopted by the Serbian army in 1998.

Hastily developed during the 1993, this rifle, of course, was not the best model of weapons in its class, but allowed at that time to close the empty niche in the weapons system of the Serbian units. Practically 10 years after that, the rifle underwent significant processing and improvements, to then appear on the market as a completely new product, which received the new name Zastava M12 "Crna koplje" (black spear, Serb.). Mass production of this rifle was deployed in the 2012 year. 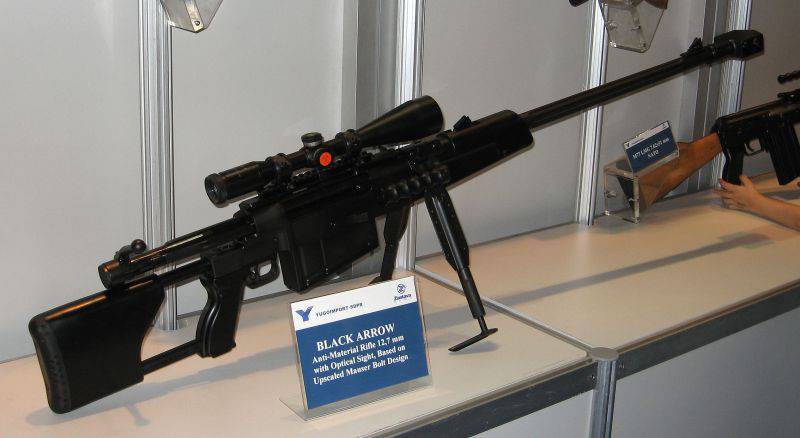 The rifle is available in two versions: under the standard Soviet cartridge 12,7x108 mm and in the export version under the standard NATO cartridge - 12,7x99 mm (.50BMG). Rifles differed from each other in barrel length and weight, respectively. The Soviet cartridge rifle was distinguished by the presence of a barrel with a length of 1007 mm and a weight of 13,46 kg, a rifle for a NATO cartridge was smaller and lighter, the barrel - 840,5 mm, weight - 12,93 kg. It should be noted that M12 was a development of the previous model, but due to the wide use of new titanium alloys and some design changes, Serbian gunsmiths managed to reduce the total weight of the weapon by about 2,5 kg, which is important.

This large-caliber sniper rifle is serially produced from the 2012 of the year, while the production of the M93 was also not discontinued. These rifles are designed to destroy enemy manpower, which is protected by an NIB — by means of individual armor protection — or is located behind light shelters, or destroying / disabling unarmored and lightly armored enemy equipment at a distance of up to 1800 meters.

The sniper rifle operates according to the principle of a free Mauser type sliding shutter that locked the barrel bore on 3 combat stops: one was located in the rear, the other two in the front. The barrel of a rifle is heavy, made by cold forging, the barrel is chrome-plated. The longitudinal valleys located on its outer surface were designed to better cool the rifle and reduce its weight. A massive muzzle brake compensator was installed on the muzzle of the barrel, which, according to the developers, provides the damping of 62% recoil force when fired. 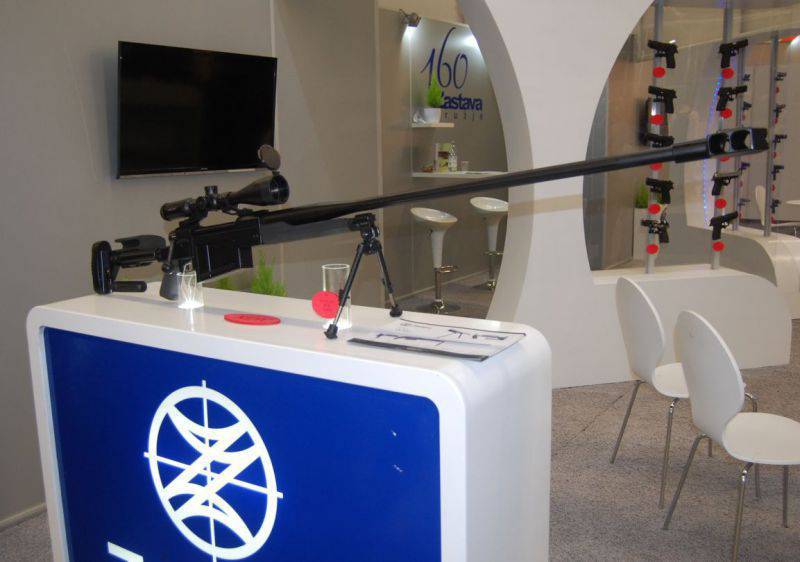 In front of the barrel was a folding front sight, and a rear sight was mounted on the forearm, together they formed an additional open (mechanical) aiming device in addition to a rifle-sight mounted rifle scope. The barrel of the weapon was made of steel, and in its front part on the right side there was a folding handle for carrying the rifle for short distances, as well as a mount for folding double-back bipods. A two-position safety lock was located inside the trigger guard just behind the trigger.

The rifle turned out quite successful and is not only in service with the Serbian army, but also supplied for export. Over time, Zastava Oruzhje presented a sports version of this rifle on the market, which was designated as Zastava LK M12. This rifle is available only in the version for the NATO cartridge 12,7x99 mm (.50BMG), unlike its military version. At the same time, the sniper rifle remained almost identical to the one in service with the Serbian army. The rifle's mass is 13 kg, its total length is 1520 mm, the capacity of the 5 magazine ammunition. This sample of small arms can be interesting both to sports shooters for long distances, and to weapon collectors who collect copies of military samples of weapons.

Structurally, the Zastava LK M12 sniper rifle is a small-arms shop with a longitudinally sliding butterfly valve like a Mauser rifle. The cold stem is chrome-plated on the inside. The rifle is equipped with a two-chamber highly effective muzzle brake, which, together with the buffer device located in the butt, significantly reduces the recoil when fired, journalists of the specialized resource all4shooters.com note. The tubular butt of a sniper rifle LK M12 is made of aluminum. It can be adjusted, equipped with a cheek and an additional lower support, which can also be adjusted in height and fold into the butt. The bipod mount, located on the console in front of the receiver, is standardized, which allows you to mount different types of bipods on the weapon, in accordance with the preferences of a particular shooter. 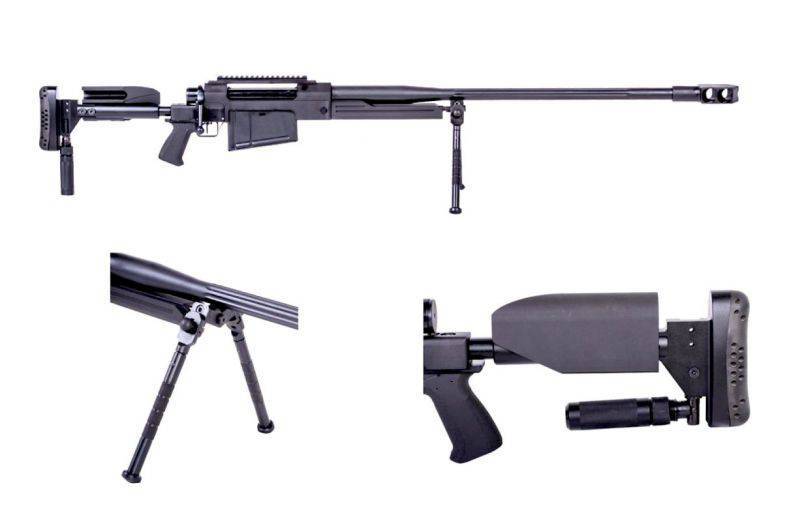 The triggering force of this rifle is customizable and can vary in size from 5 to 15 N, which is selected based on the individual capabilities of the shooter. It is also possible to change the position of the trigger. The design of the weapon has a safety device that, in the on position, blocks the firing mechanism. Mechanical sighting devices, unlike its military "sister", this sniper rifle does not have. At the same time on the upper part of the receiver was installed standard Picatinny rail MIL-STD-1913, which is made as a single part and is designed for mounting a variety of optical sights. If necessary, a folding mechanical sight can be mounted on the rifle, which is adjusted in 400 meters.

The scope of delivery of this rifle includes tools and accessories, a spare magazine, a carrying case / carrying case for weapons, a bag for storing spare parts, a magazine pouch, a manual for weapons and earplugs. By order, this large-caliber sports rifle can be equipped with a Versa bipod and a Valiant 4-16x56 optical sight.