December 14 2015
29
Evidence of the use of Russian weapons by the Syrian army has reappeared in domestic and foreign media. Deliveries of weapons and equipment of Russian production to Syria are not newsHowever, from time to time there are very interesting reports on the transfer of certain new samples. So, at the beginning of this year there were reports of the use of the MC-116M sniper rifles by the Syrian army. In early December, this topic became relevant again: several publications published photos of Syrian snipers with this weapons Russian production.


In general, the delivery of Russian small arms to friendly Syria is not sensational news. Military-technical cooperation between Russia and Syria has lasted for several decades, and with the beginning of the civil war, it only intensified. Due to the loss of bases and warehouses with the material part, the Syrian military was forced to place new orders for a particular military product. Not later than the end of last year, the range of weapons supplied was replenished with Russian high-precision rifles MC-116M. It should be noted that the order itself could have appeared much earlier, and the delay in the appearance of the first evidence of the supply of such weapons is due to a number of objective reasons. 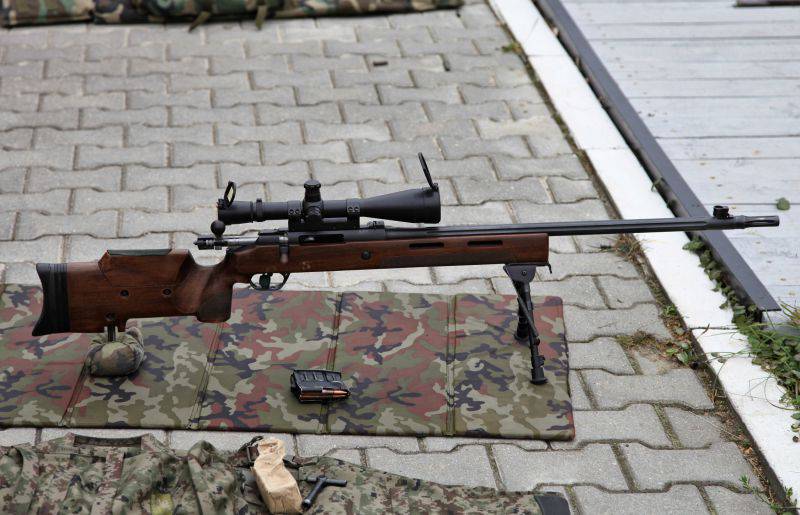 General view of the rifle MTs-116M. Photo of Wikimedia Commons

According to reports, the Syrian armed forces received a number of rifles, MC-116M, which were transferred to a number of ground forces. This weapon is used for its intended purpose: to defeat enemy personnel at distances of up to several hundred meters. In addition, it is likely that Syrian snipers using such rifles can hit unprotected enemy vehicles. The well-known characteristics of MC-116М suggest that this weapon is highly effective when used in urban and other settlements.

The sniper rifle MTs-116М was developed by the Tula Central Design Bureau for Sports and Hunting Weapons (TsKIB SOO), now part of the Instrument Design Bureau, in the mid-nineties. The aim of the new project was to create a combat version of the existing sports rifle MC-116. Such weapons were successfully used by Russian athletes, and its main features allowed the creation of a combat rifle with similar parameters. By processing new parts and changing some of the design features, the MC-116M sniper rifle was created. Work on this project was completed in 1997 year.

The MC-116M rifle is a non-automatic, precision-guided weapon with manual reloading and magazine ammunition designed for 7,62x54 mm R cartridge. Some units borrowed from the baseline Sporting MC-116 are used in its structure, however, a magazine and some others were used for construction in the troops nodes designed to enhance performance.

The MC-116M is equipped with a “heavy” rifled barrel of 7,62 mm caliber with a length of 650 mm (85,3 caliber). On the lateral surface of the barrel, the valleys are provided, by which more efficient cooling between shots is ensured. In the muzzle of the barrel are folding fly and mounting for slotted flame arrester. An important feature of the rifle is the design of the barrel mount. The barrel is made freely hung and held in place only by contact with the receiver. The rifle is designed in such a way that it does not come into contact with the side surface of the barrel over its entire length. This allows you to provide a constant barrel oscillations when firing, which is easier to take into account when shooting.

The barrel is fixed in a cylindrical receiver, located in the rear of the box. The design of the box has a number of features characteristic of weapons with manual reloading. In the right side there is a window for ejection of the sleeves, in the bottom - the receiving window of the store. In the back of the box there is a figured cut-out, along which the shutter handle passes during preparation for the shot. On the upper surface of the receiver provides mounting for sighting devices. Early series rifles were equipped with dovetail slats. Currently, rifles are equipped with Picatinny slats, expanding the range of compatible sights.

The shutter of the weapon is made longitudinally sliding and rotates around its axis in the extreme forward position. Locking the barrel before firing is done with the help of two combat stops of the combat larva. To control the recharge on the gate has a L-shaped handle. The form of the latter facilitates the work with the shutter, and also does not impose restrictions on the design of the sight. 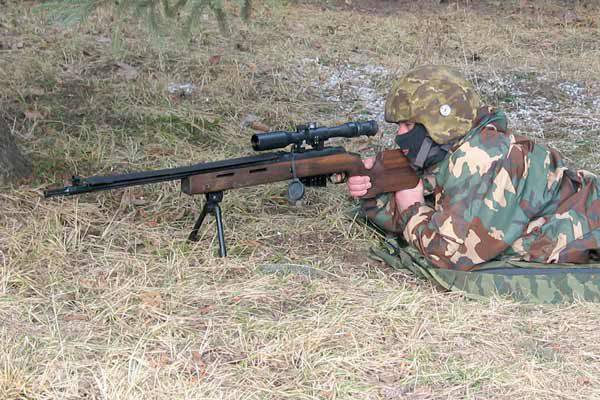 Shooter with a rifle. Photo Kbptula.ru

The supply is carried out from detachable box magazines on 5 or 10 cartridges. In this case, the package includes shops 6В1 on 10 cartridges. The magazine is placed in the lower window of the box and secured with the appropriate latch.

All units rifle MTs-116M mounted on a wooden bed with an adjustable butt. For more convenience, the shooter provides mechanisms for changing the length of the butt and cheek height. It is also possible to move the butt plate in the vertical and horizontal planes. The butt length is adjustable within 30 mm, the vertical deflection of the butt plate is also limited upwards and downwards by the 30 mm, and the lateral deviation to 6 mm. The cheek of the stock can go up by 30 mm and move both ways by 6 mm. 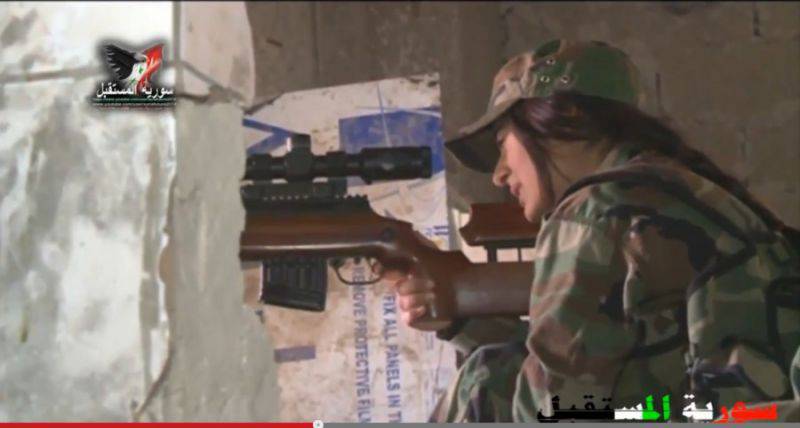 The basic set of sniper rifle MTs-116M includes an optical sight POSP-8x42L. If necessary, the shooter can use other sights, mounted on the bar receiver. To improve the accuracy of fire, the rifle is also equipped with a bipod of the MT116M C64 type bipod, an adjustable emphasis on the butt and an anti-leash MTX116M Cb6.

The MC-116M rifle with an empty magazine and without sights weighs about 6,5 kg. The length of the weapon without modular devices - 1250 mm. The minimum distance from the middle of the trigger to the butt plate is 340 mm.

According to the manufacturer, the effective range of the rifle reaches 700 m (according to other data, 800 m). At the same time, high accuracy is ensured. According to some reports, when using quality 7,62x54 mm R "Extra" cartridges, accuracy of the order of 1 MOA is ensured. 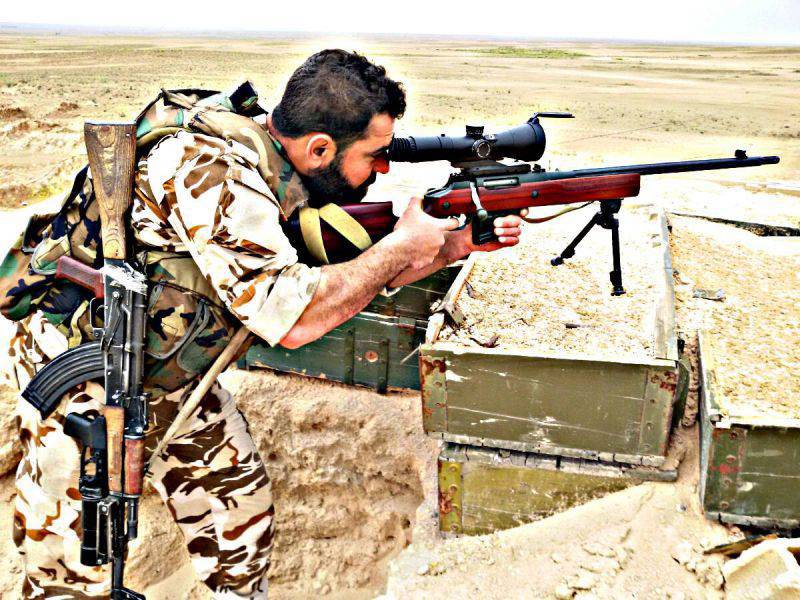 According to reports, in the late nineties, the sniper rifle MC-116М went into mass production. Nevertheless, the specific characteristics, labor intensity of production and tactical niche affected the pace of production. Rifles of this type are produced in small batches by order of various structures from the Ministry of Defense, the Ministry of the Interior, the Federal Security Service, etc. Thus, the total number of MC-116М rifles produced may not exceed a few hundred.

According to the manufacturer, the rifle can be equipped with two types of barrels, designed for different cartridges. The main ammunition is a domestic 7,62x54 mm R. In addition, it is possible to issue weapons under the patron of 7,62x51 mm NATO. In this version, the MTs-116M rifle is offered for export.

At the beginning of 2015, the first photographs and videotapes appeared, in which were shown the arrows of the Syrian army with the rifles MC-116M. This was the first evidence of the supply of such weapons to friendly Syria. In the future, Russian precision rifles repeatedly flashed in the new chronicles of the war. The details of the use of such weapons have not been clarified, but it can be assumed that their use makes it possible to effectively hit the enemy's manpower, support the advancing units with fire and solve other combat missions. 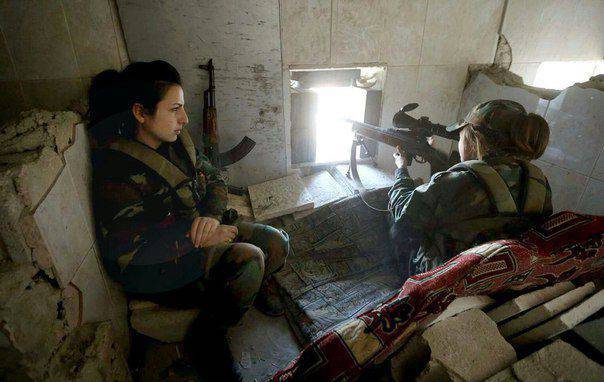 The sniper rifle MTs-116M is a further development of sports weapons, which made it possible to achieve high performance. This weapon has been used for a long time by the Russian military and security forces, however, it is mainly used only during trainings and exercises. The supply of rifles to Syria made it possible to test these weapons in real conflict. Judging by the fact that the exploitation of such weapons continues, MC-116M has proven itself well, and the original approach to creating a rifle has been fully justified.