December 7 2015
77
At the end of 2014, the Kalashnikov Concern introduced a restyled version of its MP-155 model in the K version to the Russian market, giving this self-loading smooth-bore gun the aggressive features of modern weaponsin service with the armies of the world. Self-loading rifles are produced in Izhevsk under the brand name Baikal. For Baikal MP-155, the basic basic structural elements of the weapon, the gas engine, the locking mechanism, and the adjustment of the automation motor impulse remained similar to the basic model of the gun, the MP-155.


A distinctive feature of the updated gun was its appearance, made in the style of "Military." The self-loading smooth-bore shotgun with the box magazine MP-155K was a further development of the series of smooth-bore guns of the Izhevsk mechanical plant. This weapon has a very wide range of applications: for hunting, sports shooting, self-defense, law enforcement. The 12 caliber rifle was specially created on the basis of the very popular self-loading hunting rifle MP-155 chambered for 12 / 76 and quite reliably used with the entire range of 12 caliber cartridges on the market - from 12 / 70 to 12 / 76. 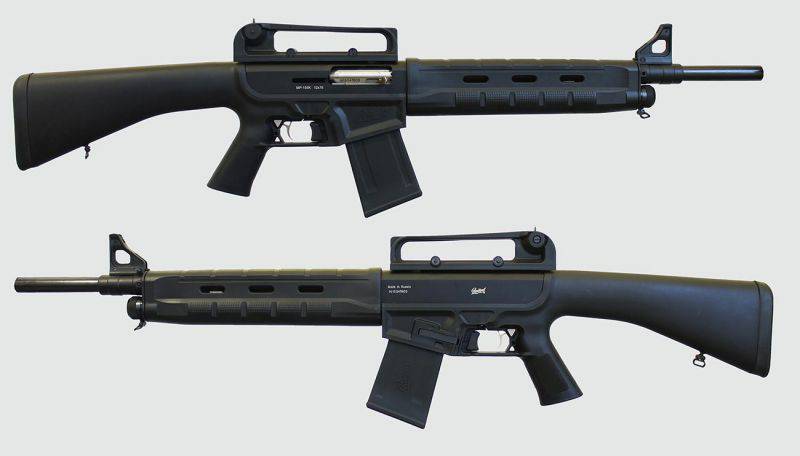 The Baikal MP-155K self-loading smooth-bore rifle was originally designed to meet the needs and tastes of the younger, more modern generation of Russian shooters with regard to sports, hunting and possible self-defense. The layout of this shotgun makes it quite suitable for a large number of other professional applications, ranging from self-defense and ending with the protection of law and order. The authors of the resource all4shooters.com believe that Baikal MP-155K in Izhevsk was conceived as a weapon to create competition with some tactical-style shotgun models, shotguns with a store supply system from a young Turkish manufacturer, such as Uzkon BR-99 "Barak" , Eksen MKA-1919 and many other similar models.

Currently, the Baikal MP-155K rifle can be viewed as a “tactical version” of the working system, which was used in the time-tested and reliable classical Izhevsk Baikal MP-153 and MP-155 hunting rifles. At the same time, the MP-155K self-loading smooth-bore gun was built on the basis of a self-regulating gas-operated automatics with an annular gas piston located under the barrel of the weapon (around the magazine tube). 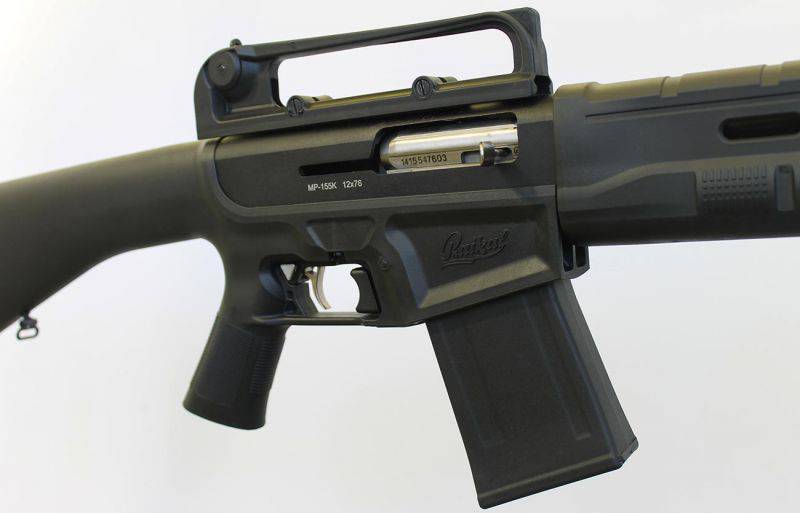 The venting automatics are self-regulating to provide the necessary level of reliability with any kind of shot (in terms of objectives and concept, the gun resembles the Benelli ARGO system, which is used on the M4 "Super 90" shotgun, also known as M1014 JSCS). In this case, with an incomplete disassembly of the gun, you can make a manual adjustment in order to optimize the effectiveness of the weapon for heavier or lighter fraction shells. The shotgun of a Baikal MP-155K smoothbore gun is mounted on a separate base, while the shotgun received a slide delay that locks the bolt in the rear position if there are no cartridges in the magazine. The barrel is locked by a swinging grub, which is located in the gate and engages with the stem shank, which was equipped with a system of interchangeable chokes or choke.

The receiver box of the Baikal MP-155K self-loading smooth bore gun is essentially the same as the base shotgun of the previous MP-155 hunting shotgun. Its upper part was made of black anodized aluminum alloy, it is installed on the lower part, which is made of reinforced polymer, also black, which includes a fixed butt and a pistol grip, as well as a fully removable trigger - trigger mechanism. The butt and pistol grip are made of modern high impact polymer, which is able to provide the necessary level of strength and allows to reduce the weight of the gun, which does not exceed 3,5-3,6 kg without cartridges. On the lid of the tube of the store and the butt there are unshirts. The Baikal MP-155K self-loading smooth bore gun's ventilated forearm is also made of polymer and protects most of the barrel of a stainless steel weapon. The shotgun barrel itself was initially tested for ammunition with steel shot and high pressure. Removable / replaceable chokes are available. With shotgun compatible chokes: C, IC, M, IM, F and XF. In a smooth-bore weapon, chokes are called choke (or a bell), which is necessary to reduce or, on the contrary, increase the dispersion of a shot at the moment of shot from a shotgun.

With the MP-155K shotgun, box magazines designed for 5 cartridges are used. They are equally well suited for cartridges with a sleeve length of 70 mm, and for cartridges with a sleeve length of 76 mm. The flat-shaped shutter release lever is located on the trigger guard, the shooter can easily reach it with his index finger for faster reloading of the weapon. The trigger type USM was designed as a separate, removable unit that is mounted inside the box casing. The trigger mechanism is equipped with a non-automatic safety device that blocks the trigger, there is also a slide latch, which is designed to stop the moving parts of the weapon in the rear position after all the cartridges in the magazine are used up.

Izhevsk smooth-bore gun MP-155K has an open sight with adjustable horizontally and a front sight, which is adjustable vertically. In this case the gun has two positions: with a diopter and an open type of sight. The sight is mounted on a carrying handle and strongly resembles those used on carbines and AR-15 rifles and their numerous derivatives. The rear of a smooth-bore shotgun is built into a removable carrying handle, which itself is placed on the Picatinny-level MIL-STD-1913. This allows the shooter, if desired, to change the sight, replacing it with any optical or even optical-electronic guidance system that is currently available on the Russian arms market. 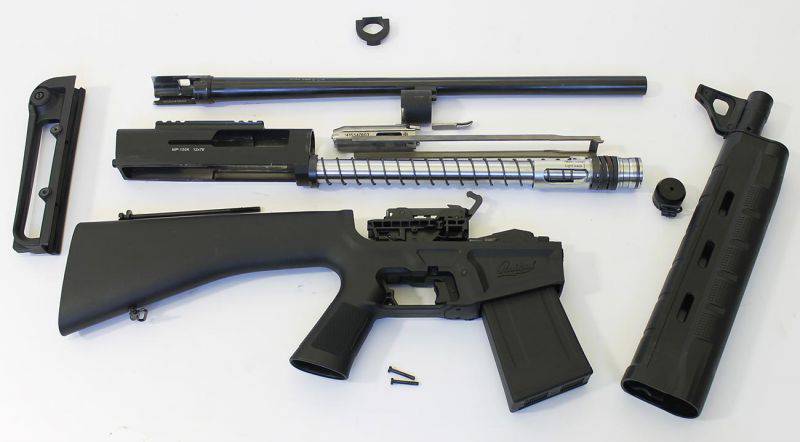 Currently, the gun MP-155K offers a variety of applications. The weapon is available for commercial sales in Russia at a fairly competitive price. According to the recommended retail price on the manufacturer's website, the weapon should cost 21176 rubles at retail. Currently, buyers are available pre-order. At the same time, due to the sanctions against Russia, the Baikal MP-155K autoloading smooth-bore gun is not available for some foreign buyers.