December 7 2015
40
In late November, there were reports of new actions by the Turkish military leadership in connection with the current conflict in Syria. A number of foreign media reported on the transfer by the Turkish armed forces of a large number of weapons and military equipment to the border with Syria. In particular, some quantities were reported to the border areas tanks. Concerns are expressed about the possibility of using this equipment to invade Syria with the goal of the final overthrow of legitimate authority.


For obvious reasons, the main concern in this context is caused by Turkish tanks. It is this technique, according to the current views on the course of armed conflicts, that is capable of ensuring rapid movement of troops over the territory being seized. Thus, it is the tanks of the Turkish armed forces that may pose a particular danger to the Syrian army. Nevertheless, it should be noted that the Turkish armored forces have several specific features. For example, it can be noted that a large number of army armored vehicles is compensated by the presence of a significant number of vehicles of obsolete types. Consider the fleet of Turkish tanks in more detail.

According to the directory The Military Balance of 2014, the army of Turkey’s ground forces consist of several types of 2504 tank. In addition, about 2000 machines are located on the storage bases. In service and in storage there is a vehicle of seven modifications purchased from the United States and Germany. It should be noted that Turkey is attempting to create tanks of its own design, but so far such projects are not very successful. Thus, the promising main tank Altay so far exists only in the form of several prototypes, and its mass production will begin no earlier than 2017 of the year. In this regard, ground forces have to operate only the available equipment, in some cases not differing in novelty. 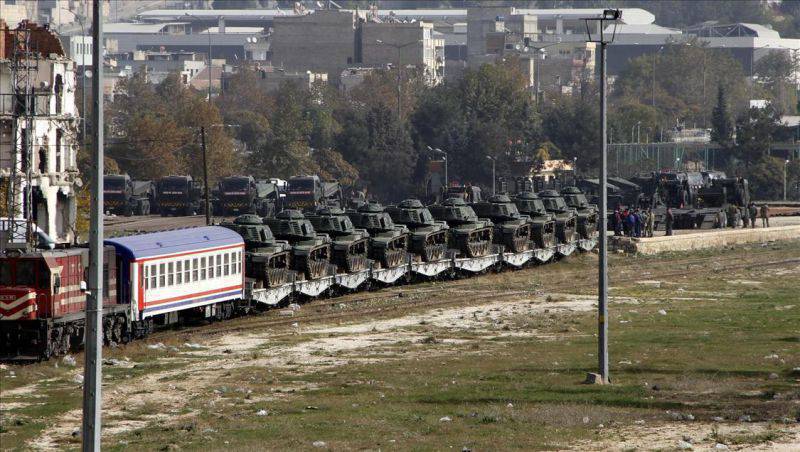 Transportation of tanks in the border areas. Photo Vnews.agency

The most massive tanks of the Turkish army are the American-made M48A5T1 and M48A5T2 vehicles, which were modernized according to Turkish designs. As of last year, the troops had 850 armored vehicles of both types. In addition, a large number of such equipment to date, decommissioned and sent to storage. The M48A5T1 / T2 tanks can be considered an excellent example of the state of affairs in the Turkish armed forces: Turkey still has a large amount of outdated technology, which is not expected to be replaced. At the same time, it should be noted that in the foreseeable future, the command is planning to replace the existing M48A5T1 / T2 with new Altay tanks, but this will take a lot of time.

According to reports, the Turkish M48 family tanks were supplied by the manufacturing country in the M48A5 configuration. This modification of the American tank had a modified turret with a M68 cannon of caliber 105 mm and, for a number of characteristics, did not differ from earlier versions. Later, Turkish specialists, with the assistance of foreign colleagues, carried out modernization of the outdated equipment. The M48A5T1 project implied the installation on the existing tanks of the new diesel engines of the German company MTU and the fire control system borrowed from the M60A1 tanks. In addition, the equipment included passive night vision equipment. The next upgrade with the T2 index implied the upgrade of T1 tanks using the fire control system from the M60A3 tank and the introduction of some additional units, such as a laser range finder.

In total, Turkey has received about 3 thousand tanks M48A5, which are still in service or in storage. In view of the development of a resource, such equipment was gradually decommissioned and accumulated at storage bases. Most of the inactive Turkish tanks currently belong to the M48 family. Nevertheless, despite the great age, such equipment is still the most popular in the Turkish army. 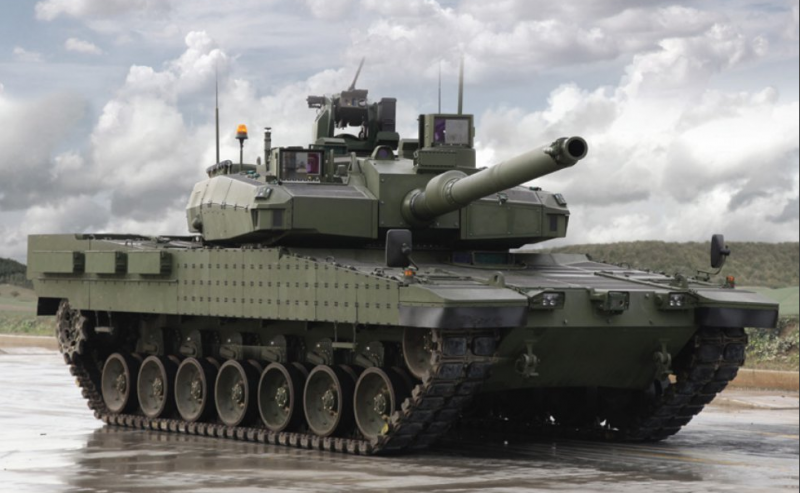 The second largest tanks of Turkey are American M60A3. As of last year, ground forces exploited 658 machines of this type. The development of the main tank M60A3 began in the late seventies, and over the next few years, the first combat vehicles of the new type were sent to customers. Characteristic features of the project with the letters “A3” were the use of an updated fire control system with improved performance at night, equipped with a new laser range finder. At the same time, however, the power plant, weapons and armor did not change significantly. Like its predecessors, the main tank M60A3 carries the 105-mm gun M68. In the future, the base M60A3 became the basis for several new modifications.

A few decades ago, the Turkish armed forces purchased several 950 armored vehicles from the US for several modifications of the M60 family. Currently, less of this equipment remains in service. During operation, new modifications were mastered, such as the M60A3 TTS with updated optics and electronics or M60T Sabra, developed by Israeli experts. Also in service remain the 274 tank M60A1, not characterized by high performance. By virtue of the development of the resource, the Turkish tanks of the M60 family are gradually being put into reserve and sent to storage.

On arms of the Turkish armored troops consists of equipment not only American, but also German production. The most popular cars from Germany are the Leopard 1 tanks of two modifications, the total number of which is 397 units. In the past, the Turkish military bought 227 tanks Leopard 1A3 and 120 Leopard 1A4. These modifications of the “Leopard-1” were created in the early seventies and differed from the previous ones by some changes in the design and composition of the equipment. The main indicators of armored vehicles remained the same. 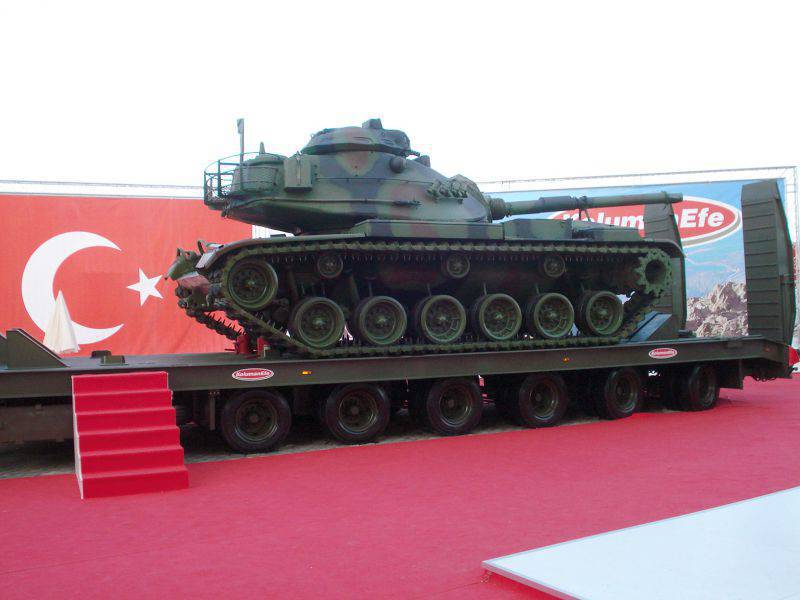 Tank M60 one of the old versions. Photo of Wikimedia Commons

Over time, the Turkish army ordered the development of a project to modernize outdated Leopard 1A3 tanks. As part of this order, Aselsan has developed a new Volkan fire control system. To date, all the drill "Leopards" version 1A3 received a new SLA and a number of other components. This modification received the designation Leopard 1T. Tanks modification "1A4" still serve without any changes.

In the middle of the two thousandth, the Turkish armed forces purchased Leopard 2A4 tanks from Germany, previously operated by the Bundeswehr. To date, 354 machines of this type have been supplied. At the moment, "Leopards" option "2A4" are the newest and most advanced armored vehicles of its class in the Turkish army. High combat performance is provided by a modern fire control system and fairly sophisticated sighting devices, as well as 120-mm smooth-bore guns from Rheinmetall.

A few years ago, information appeared about the creation by Aselsan of the project Leopard 2NG (New Generation). This project involved the use of a number of new components, partly borrowed from the tank Altay. Accurate information about the modernization of the existing technology and the number of converted machines is missing. At the same time, it was previously claimed that Finland is showing its interest in the Leopard 2NG project. 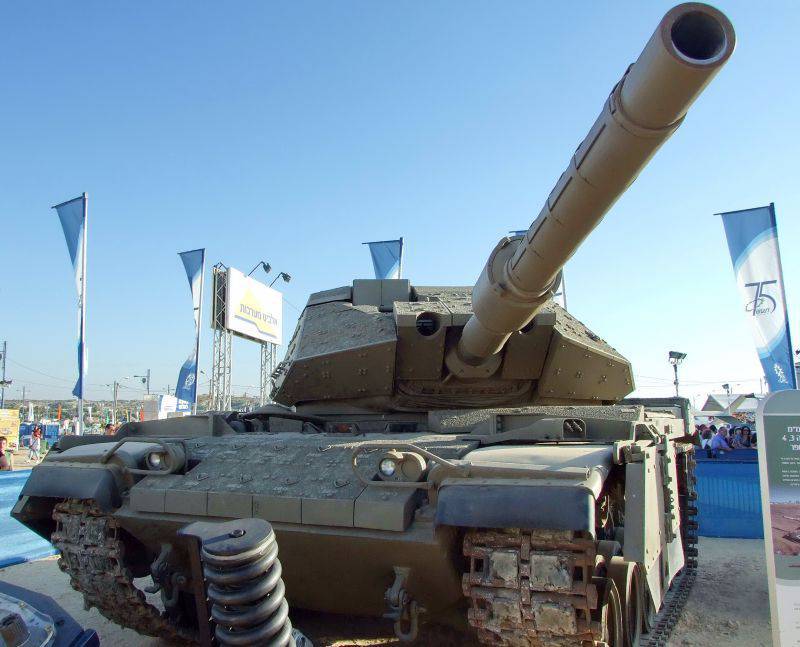 As you can see, the Turkish armed forces have a sufficiently numerous, but not the most advanced fleet of armored vehicles. Of the two and a half thousand tanks that remain in service, no more than half can be considered modern and have sufficiently high characteristics - Leopard 2A4, as well as upgraded versions of the Leopard 1 and M60 machines. The rest of the tanks no longer fully meet the requirements of the time, which is why in the foreseeable future they should be written off and replaced with more modern equipment.

It can be assumed that in combined arms combat with any army with modern tanks, aviation and other equipment, as well as appropriate communication and control systems, the Turkish ground forces will suffer serious losses, associated primarily with the specific composition of their equipment fleet. Even modern "Leopards-2" and modernized armored vehicles of the old versions are unlikely to have a significant impact on the course of battles. However, such conclusions concern only full-fledged clashes involving all military branches.

Local conflicts of the last decades mostly managed without mass tank attacks and other phenomena typical of the wars of the past. Thus, in existing conditions, not only the age of the equipment and its technical perfection, but also some other factors that make it difficult to predict the outcome of battles can come to the fore. Thus, during the invasion of Syria, Turkish troops are unlikely to face the organized resistance of a large number of enemy tanks. However, in this case there are new threats.

Most of the battles in Syria take place on the territory of populated areas, where the effectiveness of tanks and other armored vehicles is markedly reduced due to a number of specific factors, primarily due to the large spread of light anti-tank weapons. Thus, even the newest and most sophisticated combat vehicles, once in the city, are at the same risk as their outdated “brothers”. Ultimately, all this seriously complicates the prediction of the actions of a particular army.

Based on the available data, it can be assumed that the Turkish armored forces, having a large and “heterogeneous” fleet of vehicles, are fully capable of effectively fighting an adversary who does not have a large amount of modern equipment and weapons. At the same time, in the presence of relatively new tanks, anti-tank missile systems and sufficient air support, the conditional enemy is quite capable of causing great damage to Turkish tank formations, knocking out a significant amount of equipment.

In the context of the current conflict, it can be assumed that Turkish armored forces are capable of causing significant damage to many participants in the Syrian war, from government troops to various armed groups. At the same time, they themselves are at risk of suffering serious losses from large amounts of anti-tank weapons available in the region.

In addition, it is difficult to predict how tank duels between Turkish military vehicles and Syrian vehicles of Soviet / Russian construction can end. Thus, the various modifications of the T-72 of Syria have noticeable advantages over the outdated Turkish tanks, and an objective comparison of these machines with the “Leopard 2” is not possible due to various factors. However, in conditions of real conflict, the advantage may be on the side of the Syrian military, who know their territory well and own equipment.

Attempts to predict the course and results of a hypothetical conflict involving Turkish tanks are associated with a number of characteristic difficulties that seriously impede forecasting. Nevertheless, one can hardly argue with objective facts: despite the large number, the material part of the armored forces of Turkey is not new and, as a result, high fighting qualities, and the ability of the small modern technology to have a noticeable effect on the course of the fighting raises serious doubts.