Cruiser ahead of time 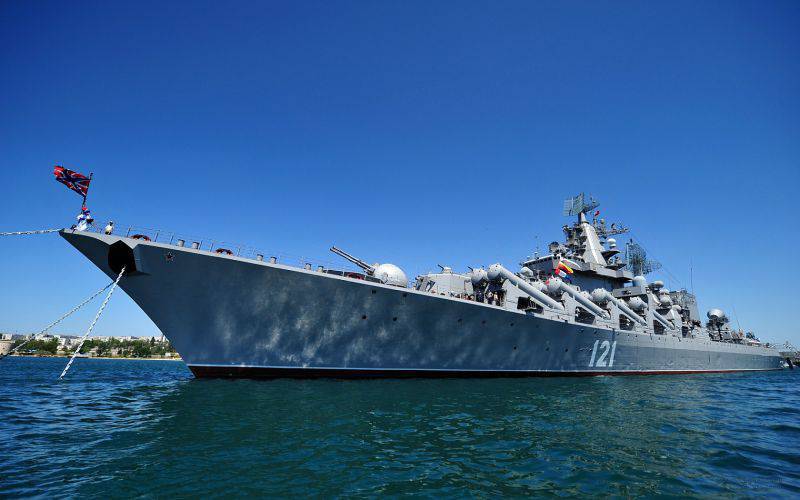 “Measures will be taken to strengthen the air defense. To this end, the cruiser "Moscow", equipped with an air defense system "Fort", similar to the C-300, will occupy the area in the coastal part of Latakia. We warn that all the goals that pose a potential danger to us will be destroyed. ”
Lieutenant-General Sergey Rudskoy, Chief of the Main Operational Directorate of the General Staff of the Armed Forces of Russia.

According to Turkish media reports, two submarines of the Turkish Navy, the Dolun and Burakreis, monitor the actions of the Moskva missile cruiser covering the Russian Khmeimim airbase in the Latakia Syrian city in the eastern Mediterranean.
News agency messages from 29 November 2015

The head cruiser of the project 1164, the flagship of the Black Sea fleet “Moscow” was founded about 40 years ago, launched in 1979 and went into operation in 1983. Despite its fantastic age, the cruiser is still in service, performing the most important tasks of covering the group of Russian troops in the Middle East.

It is curious that all foreign peers of “Moscow” were written off about 10-15 years ago. So, the last American “Spryens” long-timer was excluded from the fleet lists in 2006 year. The rest of the 30 destroyers left the combat force even earlier, at the end of the 90s. With the fact that the Spruence was called obsolete, the destroyer was capable of launching a salvo from Tomahawk 60 cruise missiles. Did not help. All were shot at the exercises or simply sent for scrap. The only surviving destroyer is used as a target towing vehicle. 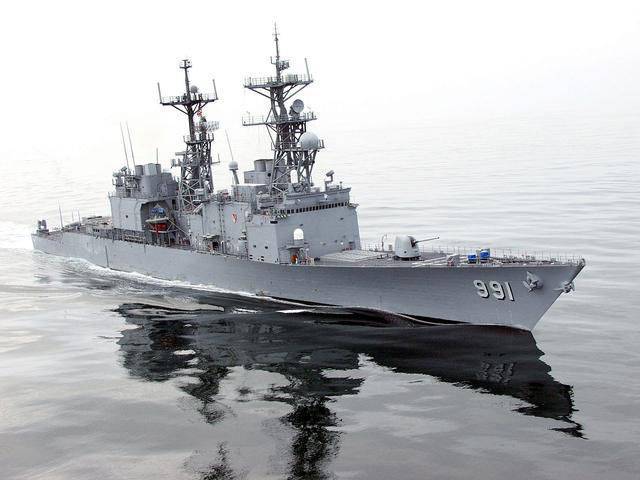 Four Virginia-class nuclear cruisers are excluded from the fleet lists in 1994-98.

The Kidd missile destroyers are written off and sold to the Taiwan Navy. What, for ships of this level is tantamount to oblivion.

British “Type 42”. The last four upgraded destroyers of the “sub-series No. 3” were sent for scrap in 2011-2013. Given that we are talking about very advanced ships, one of which made the first in the world (and so far the only) successful interception of an anti-ship missile in combat conditions (the destroyer Glasgow, Desert Storm, 1991). 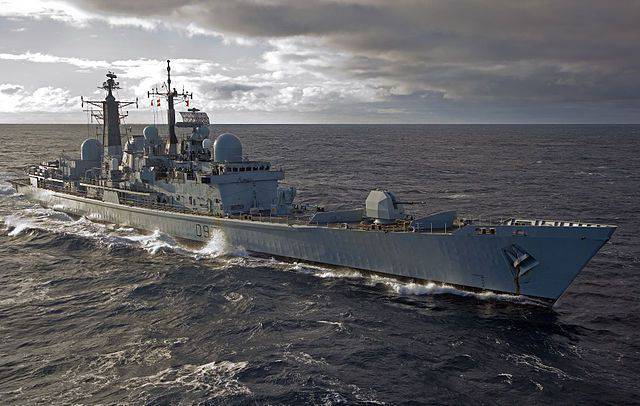 In what incomprehensible way, the peers of all these ghosts of the past, the Soviet RKR “Moscow”, continues to remain at the forefront, forcing all “probable opponents” to take into account?

An honest answer will sound deadly simply. Due to the obvious state of affairs in the Russian Navy there is no substitute for “Moscow” and, unfortunately, it will not appear in the near future. Even if you immediately rush to build destroyers Ave 23560, the replacement will arrive only in the middle of the next decade. While the fleets of other countries have long been replaced by rusty "spryuans" on Aegis destroyers, "Deringi", "Akizuki" and other "Zamvolty."

And here arises an insoluble paradox. Every time, owners of superers with the Aegis and PAAMS systems react violently to the appearance of Atlanta. They really fear the old cruiser and emit considerable forces to neutralize the threat. The fleets of NATO countries set up heavy tracking of the cruiser and, if possible, try not to approach the “Soviet scrap metal”. 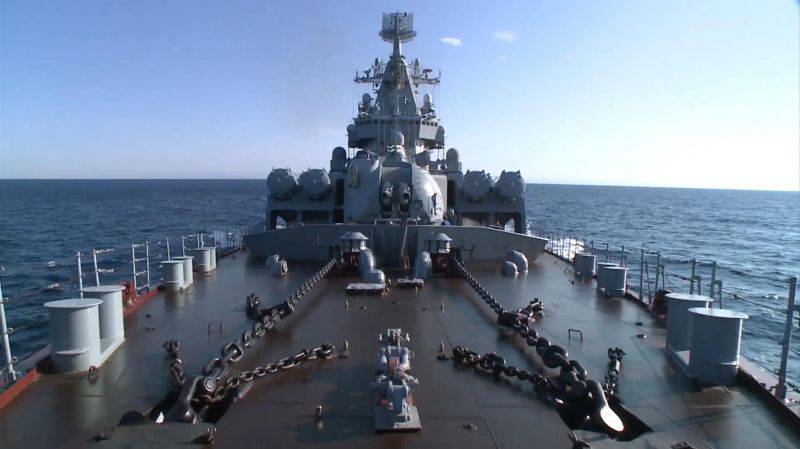 The answer is that the X. NUMX “Atlas” in its characteristics not the same age 1970-80's warships From the very beginning, the Soviet cruiser had such a potential that, even after 40 years, the cruiser could compete on equal terms with any modern Ajis destroyer.

Briefly, the composition of weapons "Atlanta" is represented by three main areas:

That in itself was atypical for ships of the Cold War era. For example, the “Spruence” is a “drummer” with PLO functions. The British “Type 42” and the atomic “Virginia” are pure air defense guns. 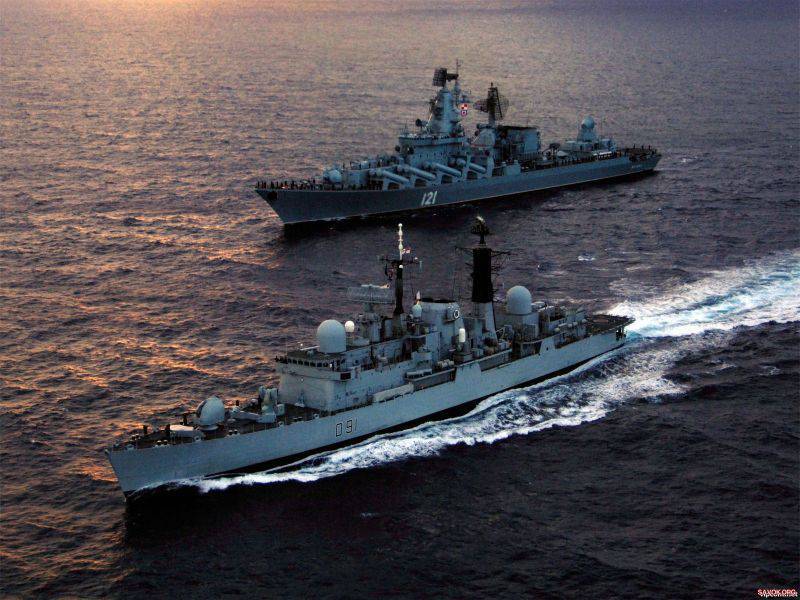 Further more. The level of technical performance of the systems and mechanisms of the Soviet cruiser was a whole decade ahead of the ships of the NATO countries. And for a number of parameters, the 1164 project has no analogues to this day.

There are no analogues in the world of supersonic anti-ship missiles with kg 500 warheads and 500 range ... 1000 km. The only possible competitor, the American project RATTLERS, still remains in the form of a layout.

Anti-aircraft complex C-300F “Fort” does not need a long view. It was a revolutionary system for the time. In addition to the magnificent missiles and fire control, for the first time in the world, the launchers were in the underdeck space. Which in many ways is related to the "Atlanta" with modern destroyers of the type "Burke" with PU-type mine. By the way, the ammunition of the cruiser consists of 64 long-range missiles. This is a third more than the ammunition of the modern destroyer of the Daring type.

The air defense system is not limited to the long-range Fort. As a means of self-defense, two single-channel short-range air defense systems “Osa-MA” (40 missiles) are provided. For the defeat of low-flying air targets at short distances, the fight against small surface targets, as well as the destruction of floating mines, there are three AK-630M batteries. Each consists of two six-barreled automata with an 6000 firing rate / min. and radar fire control "Vympel".

Ship from the past

In the design of the RKR pr. 1164 there is a number of congenital defects, whose negative influence is becoming stronger and more noticeable over time. The cruiser is aging irreversibly and no longer meets modern requirements.

The ships of the project 1164 no closed air defense circuit. The only station targeting and illumination of targets ZR41 “Wave”, located in the aft part of the ship, creates a “dead sector” on course corners. The cruiser is defenseless when attacking from the front hemisphere. At the same time, ZR41 “Wave” itself also has its disadvantage: it provides guidance of C-300 missiles in the 90 ° x90 ° sector. What makes it impossible to repel a massive air attack from different directions. 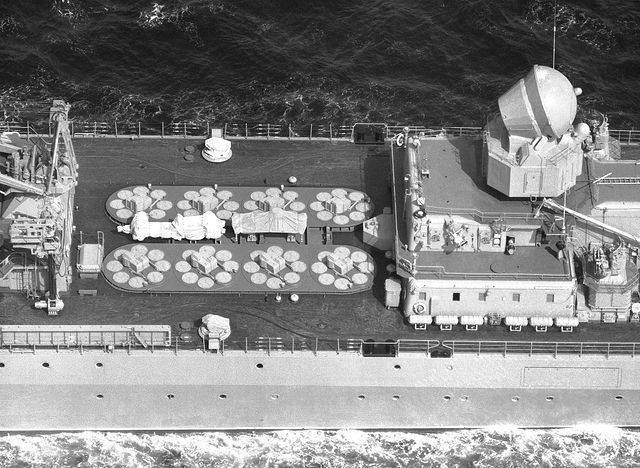 At the same time, all three AK-630M batteries are unsuccessfully concentrated in the nose section, leaving the entire rear hemisphere uncovered.

Established on the cruiser SAM “Fort” is one of the early versions of the C-300 with 5В55РМ missiles with a range of 75 km. What was considered a decent result for the beginning of 1980-s is completely inadequate in modern conditions (European Aster-30 - 130 km, American “Standard-6” - 240 km, missile defense “Standard-3” - 500 km, height of defeat not limited to the atmosphere).

It is possible to achieve a significant strengthening of the Atlanta air defense system by modest modernization with the replacement of the ZR41 with a new F1M fire control station with a phased antenna array. The range of the intercept of air targets will be increased to 150 km with a simultaneous increase in the density of fire (simultaneous targeting of missiles to 12 at six targets - against six missiles and three targets at Volna). It was precisely such an upgrade, with the replacement of the bow station of the LMS, that the nuclear-powered cruiser Peter the Great had undergone at the time of its construction (the Fort-M). 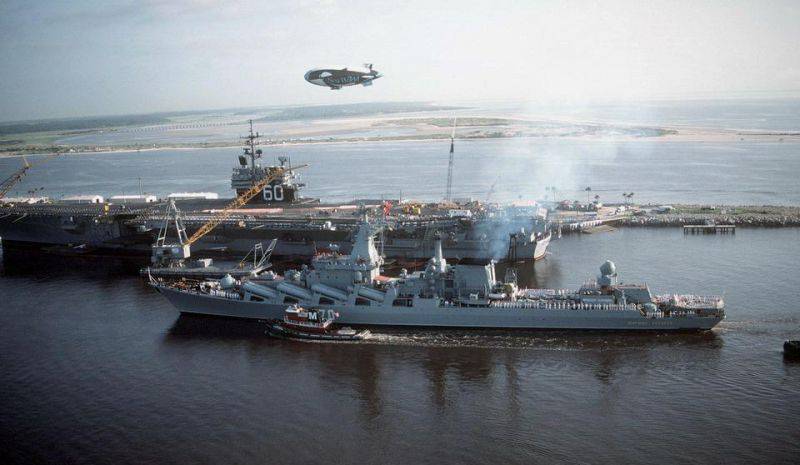 The only known shot of an aircraft carrier killer next to its potential victim.

BIU “Lumberjack-1164” has its own structural defect. Being built on the so-called. “Khutornoy scheme”, it provides only a primary target designation from the survey radar. Air defense systems installed on board operate autonomously using their own radar and fire control devices.

For comparison: the American Aegis creates a continuous information field, connecting together all the systems of the ship and ensuring the work of the only universal air defense system with long-range and medium-range missiles.

There are justified doubts about the capabilities of the Osa-MA self-defense complex. Created half a century ago, a single-channel SAM system with a beam PU with a recharge cycle of 20 seconds. How adequate is this complex in modern conditions? Interception of low-flying missiles is impossible even in theory, since the minimum height of interception is several tens of meters.

Volcano in the ocean

A few important words about the “main caliber” of domestic cruisers. 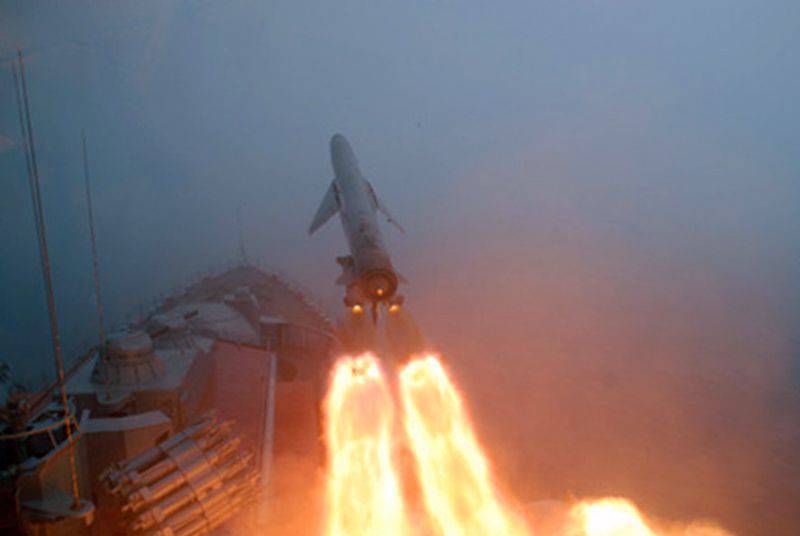 According to open sources, the P-1000 “Vulkan” does not have significant structural differences from its predecessor (P-500 “Basalt”). The main changes are associated with a reduction in the mass of the fuselage (titanium alloys) and a decrease in the mass of the warhead in order to increase the stock of fuel.

The main objective of the modernization is not associated with an increase in flight range (it is already prohibitive). In addition, the launch of the anti-ship missiles to the maximum range is associated with the problem of target designation: by the time of the missile’s arrival, the target may go beyond the limits of visibility of the Vulcan homing head.

In service with the fleets of NATO countries there are anti-aircraft missiles with a range of interception 200 + km. While a large (fighter-sized) radio-contrast target in the stratosphere is an ideal target for the Aegis marine AIRS. If she can "remove" a space satellite or a ballistic missile warhead, then what is a two-wing anti-ship missile for her?

All this indicates the need to extend the low-altitude portion of the Vulcan flight in order to avoid its early detection by the enemy. A couple of hundred kilometers in supersonic, in dense layers of the atmosphere required some effort to increase the reserves of fuel. 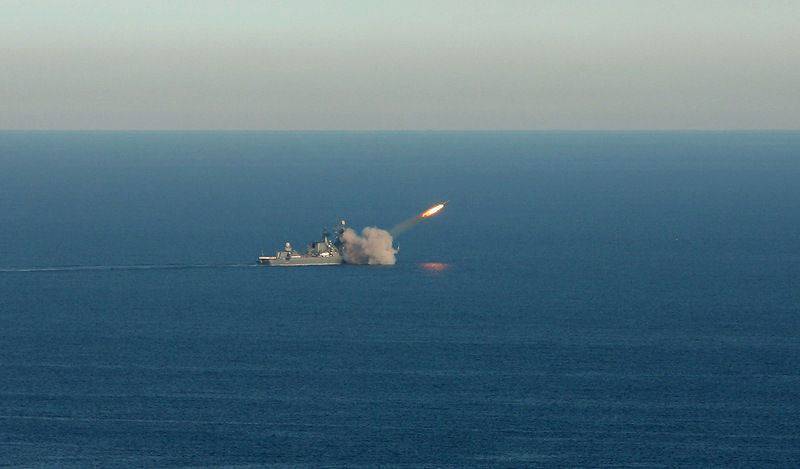 “Volcano” will find out too late. What will happen next?

Theoretically, Aegis will have time to launch a couple of dozen missiles. Approximately the same amount will be launched by another destroyer from the AUG escort. And then another half the same. The theoretically released number of “Standards” should be enough to reflect the triple volley of the cruiser “Moscow”. Plus means of electronic suppression, clouds of fire traps and rapid “Falans” ...

Well, that's all in theory. In practice, the punched superstructure of Aegis-cruiser Chancelrossville, which could not intercept a single subsonic anti-ship missile. The operator missed the message, the air defense officer on duty pressed the wrong button, and then what happened then no one remembers ...

That's because there are afraid of the ancient “Atlantes” with their fierce grin - 16 “teeth” in two rows!

At the same time, you need to start working on a replacement. Otherwise, after another 10, these cruisers will pose a threat only to their crews. 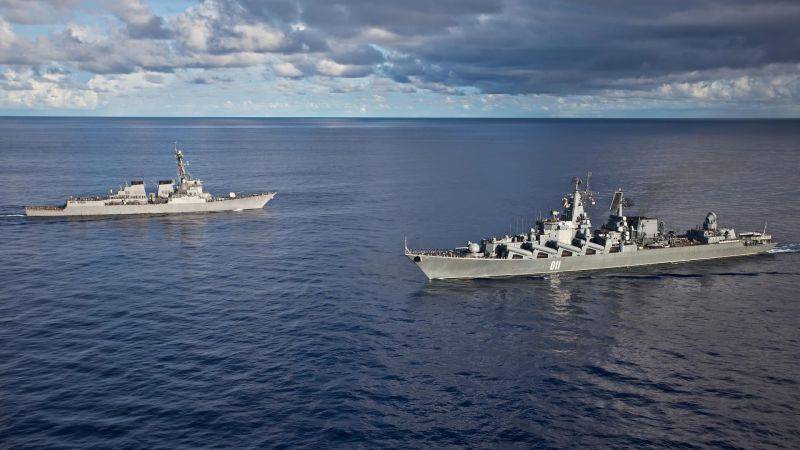