December 4 2015
12
Once in the war, the machine guns quickly showed their best. The military of several countries, in turn, immediately appreciated it weapon and still not going to give it up. Nevertheless, with all its advantages, early machine guns had some drawbacks, the main of which were often an insufficient number of such weapons. Not being able to obtain a sufficient number of the required systems, the military personnel of various units were forced to look for alternative solutions. So, during the Russian-Japanese war, non-commissioned officer Efimovskiy offered his own solution to this problem. He developed a special system capable of turning a regular rifle into a high-speed automatic weapon.


A unique document from the beginning of the last century, the “Russian-Japanese War: Album,” by photographer Viktor Bullov, is kept in the Russian National Library. The author made a lot of photos from the front and from the rear, which perfectly illustrate the military campaign. On the 33-th page of the album there is a curious photographic card with the signature “Non-commissioned officer 12 of the company of 8-st. Sibirsk. Tomsk regiment, Efimovskiy, machine gun machine inventor ”. The photo itself shows a non-commissioned officer with a “machine gun” of the original design. The image is dated 1904-1905 for years.

Unfortunately, the photograph that was taken more than a century ago by V.K. Bulla seems to be the only evidence of the existence of Efimovskogo development. Other documents telling about this invention have either not been preserved or are still in the archives and have not yet been found by researchers. Because of this, there is no detailed information about the non-commissioned officer of the 8 Infantry Regiment and its development, and all assumptions can be made only on the basis of a single photo. Nevertheless, Efimovskiy was able to show his invention in such a way that it can be well seen and draw certain conclusions. 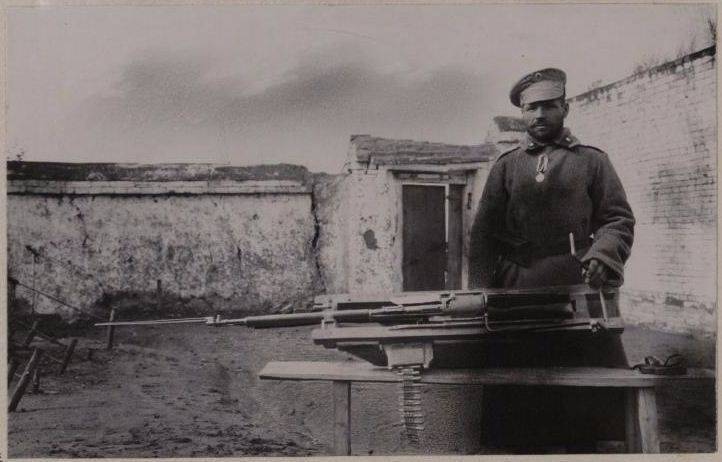 Apparently, the 8 Infantry Siberian Tomsk Regiment, or at least its 12 Company, did not have a sufficient number of machine guns, or did not possess such weapons at all. However, to fight the enemy, this compound needed a weapon with the highest rate of fire - if not machine guns, then something else with a similar rate of fire. On this basis, non-commissioned officer Efimovskiy developed his own version of the so-called. machine-gun machine, which allowed to solve all these problems with the use of only the available material parts and without the use of any complex components of factory production.

The main small arms of the Russian Imperial Army at the beginning of the last century was a three-line rifle S.I. Mosin, put into service in 1891 year. Like other magazine rifles of that time, the “trilinea” used a relatively powerful rifle cartridge and was distinguished by high rates of effective firing range, lethal force, etc. However, there were downsides directly related to the main elements of the structure. Ready to use ammunition of this weapon consisted of only five cartridges, placed in an integral shop. The rifle was reloaded manually with a longitudinal slide, and the magazine was equipped with the help of clips. Because of this, the weapon’s rate of fire did not exceed 8-10 rounds per minute.

Such a weapon could not compete with machine guns on the rate of fire and firepower. However, non-commissioned officer Efimovskiy found a way out of this situation and figured out how to turn the rifle into a kind of stan gun. Naturally, this was a compromise solution, which would hardly have found wide application, but under the existing conditions it could easily have been arranged by the military, having noticeably increased the firepower of the company.

As conceived by Efimovskiy, the existing serial rifle was to be mounted on a special machine with a set of mechanisms associated with its controls. The mechanisms of this machine had to independently feed cartridges from a tape, load a rifle and execute a shot. The shooter had to monitor the operation of the mechanisms, as well as rotate the drive handle. It is noteworthy that the only photograph shows a machine with a rifle, equipped with a bayonet. This feature of the rifle system, most likely, was associated with the specifics of the adjustment of domestic weapons.

The basis of the machine-gun was a wooden frame of appropriate size, on which mounts were provided for the bed and butt of a Mosin rifle. As you can see in the single photo, the “three-lane” was attached to the frame by the front part of the box, and its butt went into the corresponding groove of the transverse crossbar. Probably, the main frame of the machine could be fixed on various restraints or mounted on the parapet, depending on the current situation. Such attachments did not prevent the shooter to use regular sights in the form of a fly and a mechanical sight.

In front of the frame of the machine, on the left and slightly behind the rifle sight, was the receiving unit of the ammunition system. To improve the characteristics of the rifle on the machine Efimovskiy proposed to use tape power. Other options for filing cartridges were either too complicated, or could not be used to achieve the required rate of fire. The cartridges should be placed in canvas ribbons borrowed from Maxim's machine guns. It was probably much easier to get the tape than the machine gun itself. Also on the left side of the frame and under the rifle were placed some mechanisms for moving the cartridges. Unfortunately, the existing photo does not allow to consider their design.

In the back of the frame, Efimovskiy installed a drive handle for controlling the fire in the form of a twisted rod. The central part of it was fixed in the eyes on the frame, the right end served as a handle, which was supposed to rotate the shooter, and the left pivotally connected with a rigid bollard. The traction, in turn, connected the control handle with the cylinder that covered the bolt. It can be seen that the breech of the "three-lane" was closed by a certain cylindrical part with a hole into which the bolt handle went. 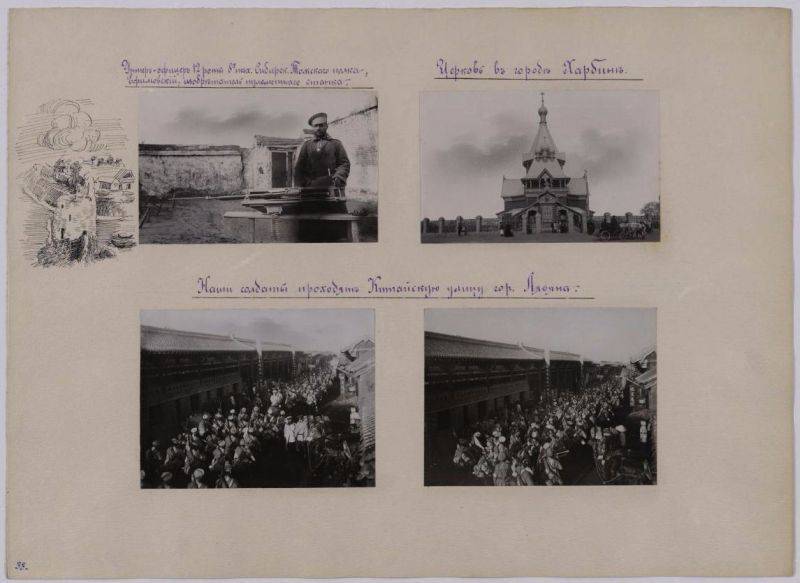 The design of the other mechanisms, which may have been located inside the machine, remains unknown. It can be assumed that there was a system of feeding cartridges, trigger mechanics, drives, etc. How exactly these mechanisms were arranged is unknown.

In view of the lack of necessary information, we can only assume how exactly the mechanisms of the machine-gun machine of the Efimovskiy design worked. Using the available data, we will try to guess the algorithm of operation of this device. First of all, we can assume that the rifle has not lost its regular store, and its loading was carried out with the shutter open through the upper window. The dismantling of the store and the supply of cartridges from the bottom would require equipping the machine with a set of too complicated mechanisms, the manufacture of which in front-line conditions was almost impossible.

It seems that before the rifle started on the machine-gun, the shooter had to fit the ribbon and place it in the receiving window of the frame, passing it through the internal mechanisms. After that, it was necessary to turn the control handle several times, activating the mechanisms and executing the ammunition supply cycle. The handle, apparently, with the help of several rods was connected with the cylinder of the bolt, the mechanism for pulling the ribbon and feeding the cartridges.

During the rotation of the handle should have been pulling the cartridge belt with sequential removal of ammunition. At the same time, the cartridges were probably pulled out of the tape and were fed by a certain conveyor to the right side of the rifle, to the level of the gate window. After that, they were dumped into the window and then sent. Further, one more mechanism in the form of plots and other parts was to press the trigger and produce a shot. Later on, the spent cartridge case was extracted and the new cartridge was fed. All operations were carried out sequentially due to the rotation of a single control knob. It can be assumed that the full cycle of charge-shot-extraction was performed during one turn of the handle.

As follows from the available data, non-commissioned officer Efimovskiy was able to develop an original system under field conditions, with which the standard Mosin rifle could fire a series of several shots at minimum intervals, as well as use existing machine-gun belts for ammunition. Undoubtedly, such an invention was of great interest even without taking into account its real characteristics. The machine gave the opportunity to shoot at the enemy at a high rate, using the available weapons, and not scarce machine guns.

Unfortunately, information about the characteristics of the machine gun machine Efimovskogo and its possible combat use is not preserved. One can only try to guess what effect the "three-lane" could have on the course of the battle, with the possibility of firing in lines. Naturally, in terms of rate of fire and overall efficiency, such a system should have been inferior to full-fledged machine guns, but the advantages over conventional rifles without special equipment are obvious.

Apparently, the invention Efimovskogo not received widespread. The reason for this could be design flaws that impede its operation, lack of approval from the command or even the delivery of a sufficient number of full-fledged machine guns. One way or another, in stories domestic small arms machine gun machine non-commissioned officer Efimovskogo remained only thanks to a single photo from the album dedicated to the Russian-Japanese war.


Sheet from the album VK Bulla Russian-Japanese War: Album on the site of the Russian National Library:
http://primo.nlr.ru/primo_library/libweb/action/permalink.do?docId=07NLR_LMS010112661&vid=07NLR_VU1&fn=permalink