Armadillos in the XXI century. What is wrong with them? 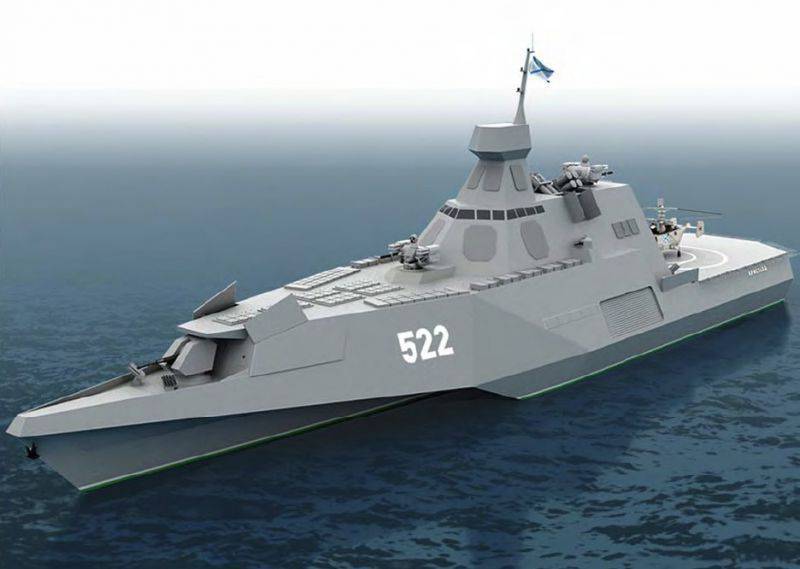 A whole series of publications by Comrade Kaptsov on the rationality of the use of booking in modern ships inspired me to write this article. I work in KB in St. Petersburg, in the department of ship systems and power plants, so I probably have to understand this. I will try to consider the advantages and disadvantages of this idea from the point of view of the shipbuilder and estimate in the sketch how such a ship might look.

It’s worth starting with choosing the class of the ship and its displacement. In modern navy, sadly, the days of superlinkors and other giant ships are long gone. The cost of their construction and maintenance is excessively high for today's military budgets. And it will be difficult to find worthy combat missions that smaller class ships would not be able to handle. And no one will build a monster that will stand by its wall all its life, eating millions of rubles for its maintenance. In the XNUMXst century, the fleet is governed by the efficiency / cost ratio, and I will proceed from this.

The practice of fleets of various states shows that the main workhorses in the current day’s sea conflicts are destroyers, frigates and corvettes, or guard ships, if in our way. I will not consider corvettes because of their relatively small displacement (2000-3000), without cramming with such a mass of serious armor. The displacement is 4000-6000 t in frigates and up to 10000 t in destroyers, and if you take into account advanced design, you get 12000 t (Chinese type 055) or 15000 t ("Zamvolt" in the US). 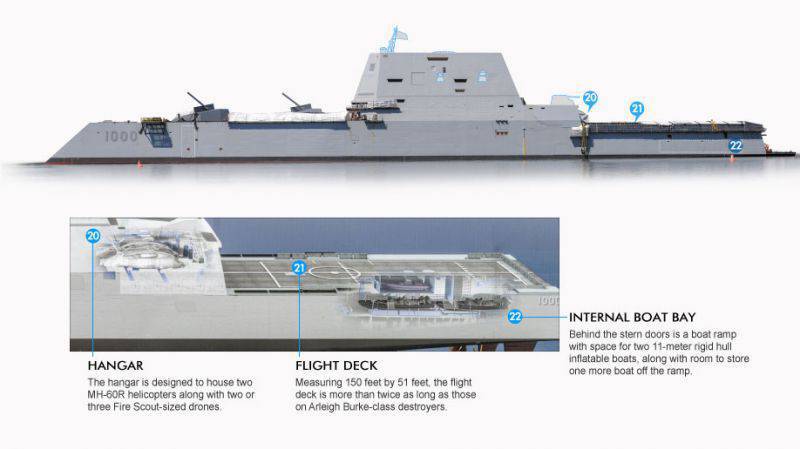 So the limits of displacement have become clear. If we take the contours of the underwater part of the hull of the same “Zamvolta”, then the dimensions are also clear.

With the power plant, I will not think much and say that there are gas turbines with a total power on the 100000 hp, as in the Arly Burke. The “Zamvolta” power plant is about the same power, and it will allow the ship to accelerate to 30 nodes. In general, fine.

And now the fun begins. What can you protect the ship with armor? The first thing that comes to mind is anti-ship missiles. Let's drop it in the direction of the air defense of the ship (now essentially being a substitute for armor), we will consider it a passed rocket. Consider ways to defeat. 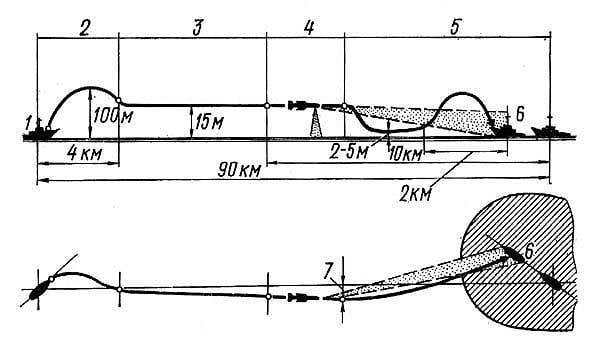 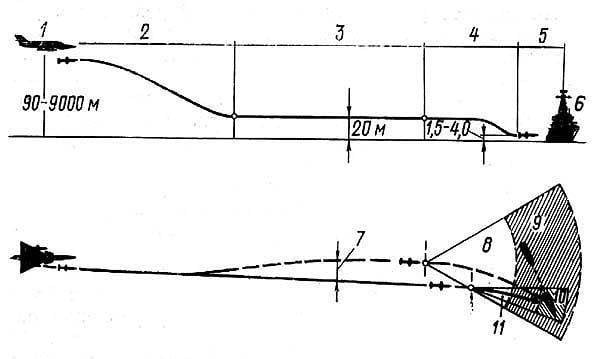 From the diagrams it is clear that the defeat goes either to the board or from the top to the superstructure, depending on the type of rocket. So, it is necessary to book both the board and the superstructure. And the board will have to book up to the upper deck, since the rocket does not hit the waterline, but at 5-6 meters above. 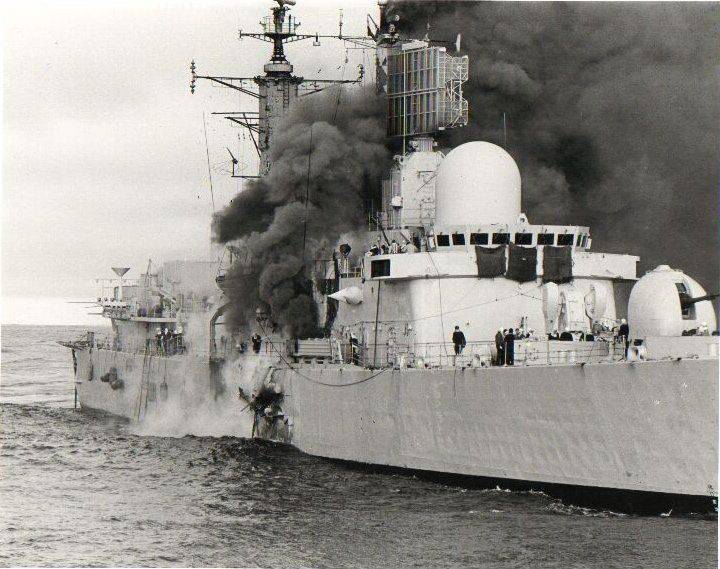 Now think about the thickness of the reservation. The warhead RCC carries between 100 and 400 kg of explosive. This is comparable to high-explosive cannon shots from 250 mm. Linkor calibers! RCC speed when entering the target often exceeds 1000 m / s, this is the speed of a rifle bullet! That is, the reservation must withstand a direct hit of a high-explosive projectile caliber above 250 mm, flying at a speed of a bullet. Honestly, I can’t say for sure how thick the armor will withstand such an impact, but let's say that the 100 mm is enough to prevent a blast wave from breaking through into the body.

Now we decide how we will book. The whole body will not book. 1000 m2 hundred-millimeter armor will weigh 700-800 tons, plus the gain set of the body to withstand the load when it hits, it is still twenty-five percent. It turns out. that 1000 m2 armor weighs 1000 t, it seems not so bad. But now we will count. Reservations from the sides of the engine rooms. Need it? Need to. One MO in length is fifteen meters for such ships, and usually two of them. The easiest way to make a citadel. It turns out that if you book at least the height of 5 m and the depth of 1 m from the waterline, you need approximately 500 m2 armor, it is 500 tons of weight. Further reservation decks. It is necessary the same thickness as the sides, and if you book only a citadel, you get 1000 m2, or 1000 t armor. If you stick the bridge and the main BP in the citadel and control the ship using monitors, then they, it turns out, are protected. Fine! Total 1500 t extra weight, and the survivability of the ship is dramatically increased. But a small "but." Weapon systems in the citadel can not be stuffed, you can not hide the radar. Let the rocket mines can be booked, this is, let's say, another 200-300 t armor. Let phased-array radars have increased survivability, and only partially falling out of a single hit. But the defense of the near and medium range armor can not be defended. Their guidance radars are still vulnerable. Communication antennas can not be removed from the add-in. Auxiliary radars too. When a rocket hits the superstructure, we still lose a lot in combat effectiveness, go blind by half the eye, and go deaf by half the ear, but still maintain the ability to fight at least somehow.

But all this can be achieved constructively, with the help of rational placement of premises and combat posts, which, in fact, is done. BP is spread around the ship, weapons are also “smeared” on the hull, so that it is not possible to deactivate all this with a single blow.

But, again, this is not important. These 1500-2000 t armor will be located above the center of gravity and accordingly affect stability. This weight must be compensated, and a simple equivalent increase in displacement will not work out. We'll have to put the ballast in order to return the value of the metacentric height of the ship back and preserve the original stability. If we assume that the total center of gravity of the armor will be higher than the center of gravity of the ship somewhere on the 5-10 m, then we will have to lay a ballast of equivalent weight on the bottom. This means that the weight does not increase by 2000, but by all 4000 tons.

And how to compensate for this? Throw out unnecessary equipment. But there is no such thing on the ship. Increase the length of the ship. But in order to add 4000 and displacement you will have to add 40 meters to the length, the ship already looks more like a canoe than a destroyer. This is not an option. Increase the width. Then the resistance of the underwater part of the hull will increase, and we will lose the course, besides, more armor will be required, and such a ship will not get through the canals. Increase the draft. But where is more? And, again, lose the move.

The most logical of these options can only throw equipment. Reduce the number of weapons. The result will be a frigate with a destroyer displacement. And worth more than the same frigate at least one and a half times. Why so? Well, 50% ship cost is a weapon system. They remained like a frigate. Power plants will have to be installed as a destroyer, and they are more powerful in 2 and, accordingly, more expensive. EU pulls the rest of the system. They will become more expensive. The body is almost twice as large and “hemorrhoid” in the assembly because of the armor and the complexity of welding, which, again, affects the price. The armor itself is also worth the money and big. The price is usually negotiable and depends on the steel grade, and the size of the sheets required, but price limits can be determined. One ton of armor plate costs, approximately, from 300000 rubles. And why should we build two armored frigates for the price of three, if they have no special advantages, but they are more expensive?

In conclusion, I will say my opinion on the reservation, that it has a place to be, but not as in the Great Patriotic War, but as a point and light splinter material. The main units and mechanisms, battle posts, the bridge and that's it, the ship is not a tank, must be protected. It is necessary to apply as much constructive protection as possible, covering critical equipment with auxiliary ones. And, of course, as much as possible air defense. Here, in fact, all the measures of protection. In principle, now ships are building like this, and armor plates have sunk in time. Alas and ah.